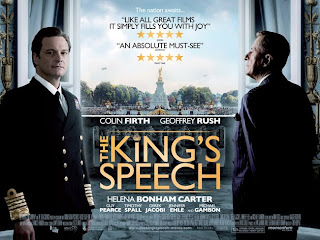 Last weekend Nathan and I went with some friends to see The King's Speech. I cannot recommend this film highly enough! If you haven't seen it, go to a theater and see it at once.

Do you need to be convinced?
1. Colin Firth
2. British accents
3. A soundtrack that includes the second movement of Beethoven's 7th Symphony

Since any one of those points could be pretty convincing alone, I think the three of them are a solid argument in favor of seeing this movie.

[I should mention one slight caution - the film does contain bad language, primarily utilized as a means of speech therapy.]

The King's Speech tells the true story of King George the VI of Britain and his reluctant ascent to the throne during the difficult time of the outbreak of WWII. On a personal level, it chronicles his battle with a speech impediment during a time when royalty were expected to address their people in speeches over the radio. King George VI is played by Colin Firth, the king's wife played by Helena Bonham Carter [I kept expecting her to put a curse on someone; thanks to her marvelous performances in the Harry Potter films], and the king's speech therapist portrayed by Geoffrey Rush.

With a cast like that you can expect a good film, and yes, they deliver one.

73-year-old screenwriter David Seidler had a personal interest in telling the story of King George VI - Seidler was a stammerer himself who had drawn inspiration from the king's ability to overcome his speech condition. This Newsweek article says,

At the conclusion of the gala presentation of The King’s Speech at the Toronto film festival in September, 2,000 people rose to their feet to give the filmmakers an ovation. “I was overwhelmed,” Seidler says, “because for the first time ever, the penny dropped and I felt I had a voice and had been heard. For a stutterer, it’s a profound moment.”

You can hear the real King George VI's speech on YouTube:

Throughout the movie I found myself particularly struck by how the king's wife served as a source of strength and support to him, never faltering in her belief that he could overcome his speech difficulty and be a great king to his people. Considering the personal problems that the film indicates led to his stammer, I imagine that the unconditional love and support of his wife - as well as the more overt help of his speech therapist - made a great deal of difference in helping him overcome his stammer. Most movies today are interested in the beginnings of love stories, and not the everyday middles of marriages. It's refreshing to see a movie that portrays a real relationship, a grown husband and wife who display love and affection and solidarity through life's difficulties.

The soundtrack is stellar, utilizing music conservatively rather than constantly as some movies do, and featuring really the best of the best at just the right moments. The regular underscoring is your usual movie music fare, but then they also work in Mozart's Overture to the Marriage of Figaro, and a bit of Brahms' German Requiem, and the second movement of Beethoven's "Emperor" piano concerto, and at the high point of the film, they hit you with the deeply moving Allegretto from Beethoven's 7th, and you may find a tear rolling down your face - or maybe that's just me. 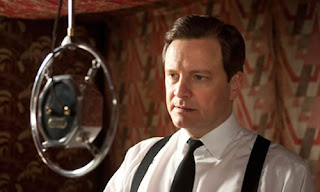 I'm tempted to say it may have been my favorite film of 2010. It's definitely not to be missed.