... it snowed again. Nathan had class but my day's activities were mostly cancelled, so I acquiesced with his request for company and drove into Boston with him. I dragged a friend along for an adventure.

Jillian and I strolled through some stores on Newbury St. Jillian tried on shoes (cute, but too expensive) in a shoe store. The store happened to have a big mirror. We decided to document the day with a photo. 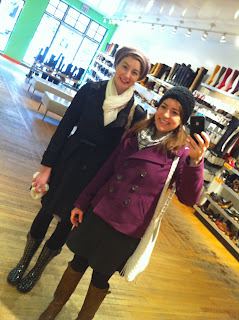 Before picking up Nathan from school and heading home, Pinkberry was a necessity. They opened one on Newbury Street in the fall, and Jillian had never been to a Pinkberry before. I usually get fruit toppings with frozen yogurt, but I decided to branch out and try a combination of hazelnut praline topping, toasted almonds, and mochi. 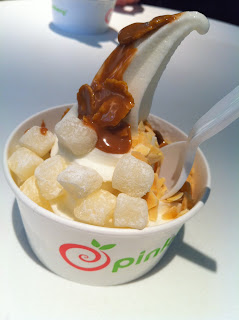 I might be slightly addicted to tart frozen yogurt. I might be saying this because I might have also gotten Pinkberry (with raspberries and mochi) the day before with my friend Melissa after our first class of the new semester. And might have had Red Mango the day before that with Chaz and Nathan after a recital in Boston. Might have, maybe, hypothetically.

So, Friday. All in all it was a nice adventure for a snowy day.