Tonight during a break from a rehearsal I checked my email on my phone and noticed an notification that I had been "tagged" in a photo on facebook. I clicked through to see this photo, which was apparently taken at a rehearsal for the recent run of "Pirates of Penzance." 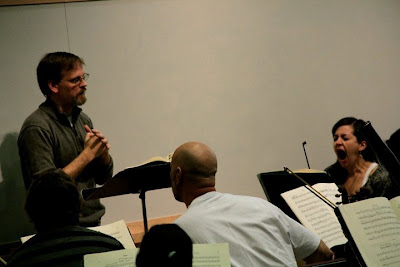 I realize that this probably reflects terribly on my gig etiquette, but nonetheless, when I saw this picture I started laughing and showed my friend Melissa. She thought it was hilarious too, and soon I had tears spilling over from laughing so hard. Adding to the humor was a comment from someone I don't know saying, "That girl on the right is fantastic," and then a comment from a friend declaring my face a "quintessential Sarah expression."

Of course, as I looked at this picture, I couldn't help remembering a certain person from the church where Nathan works who complained about seeing me yawn in church.

So that's what I look like during long sermons! Why the complaint? Clearly, this is a great look for me!

For the record, I wasn't bored at the above-documented rehearsal, and I certainly didn't intend to be rude. I also wasn't screaming, or yodeling, or trying to eat the violist to my left. Sometimes I am just really, really tired, and apparently I have a bit of a yawning problem.

So, I am indebted to the person who happened to catch me in the midst of the hugest yawn ever. I think this picture is hysterical.

Let's just have one more look at it, shall we? 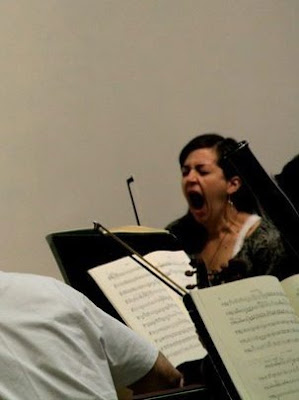 On that note, I should probably go to bed.