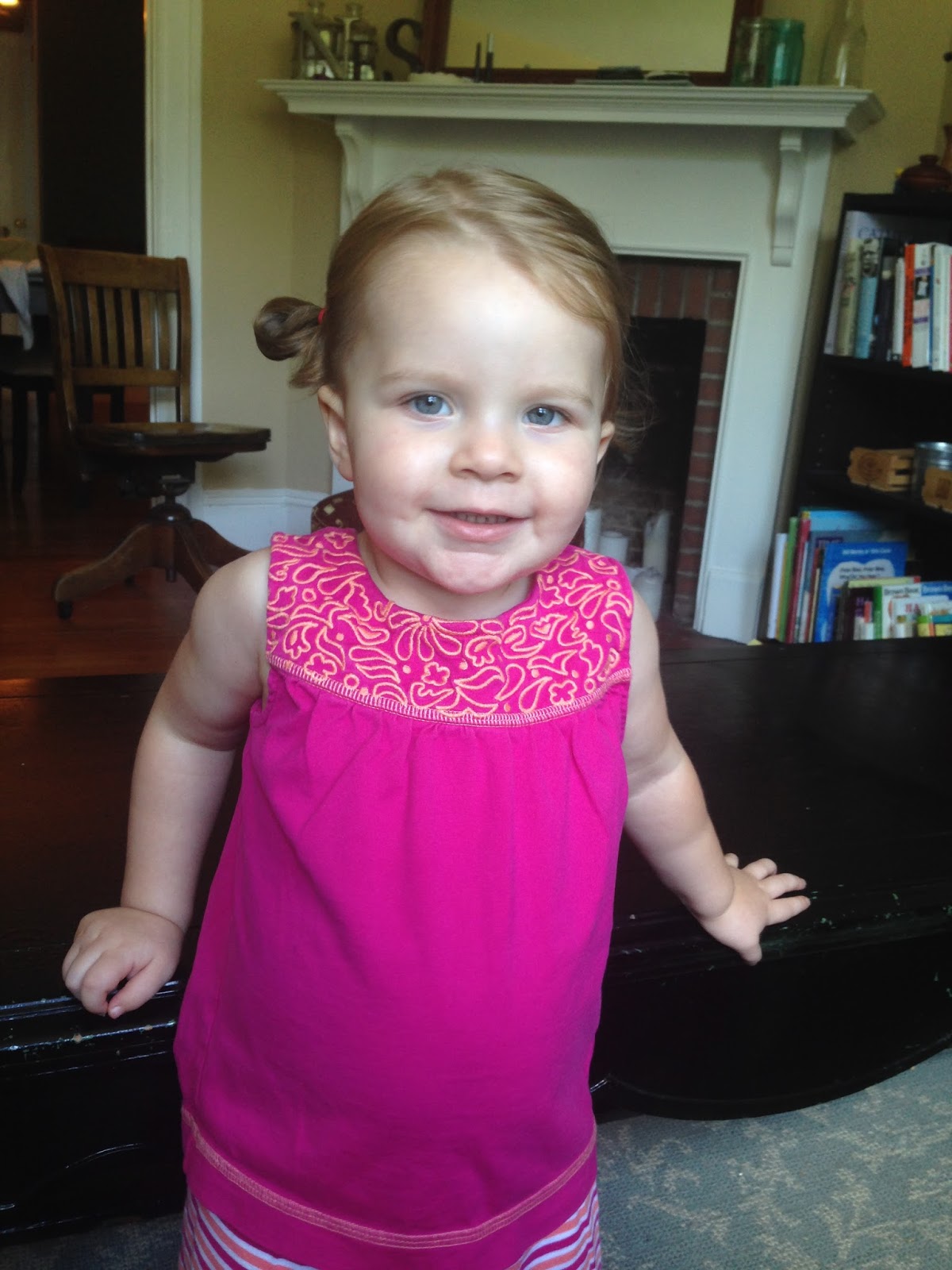 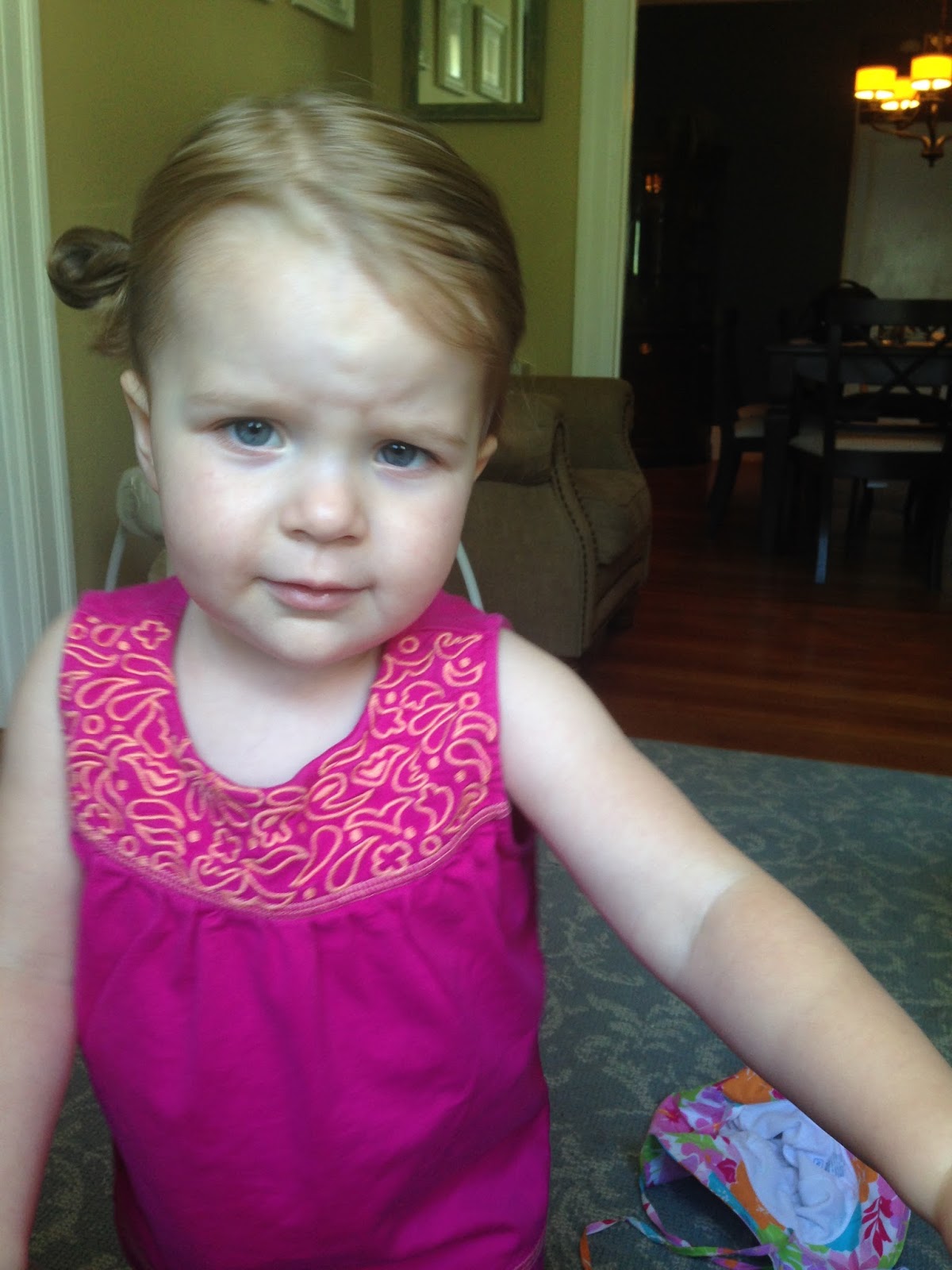 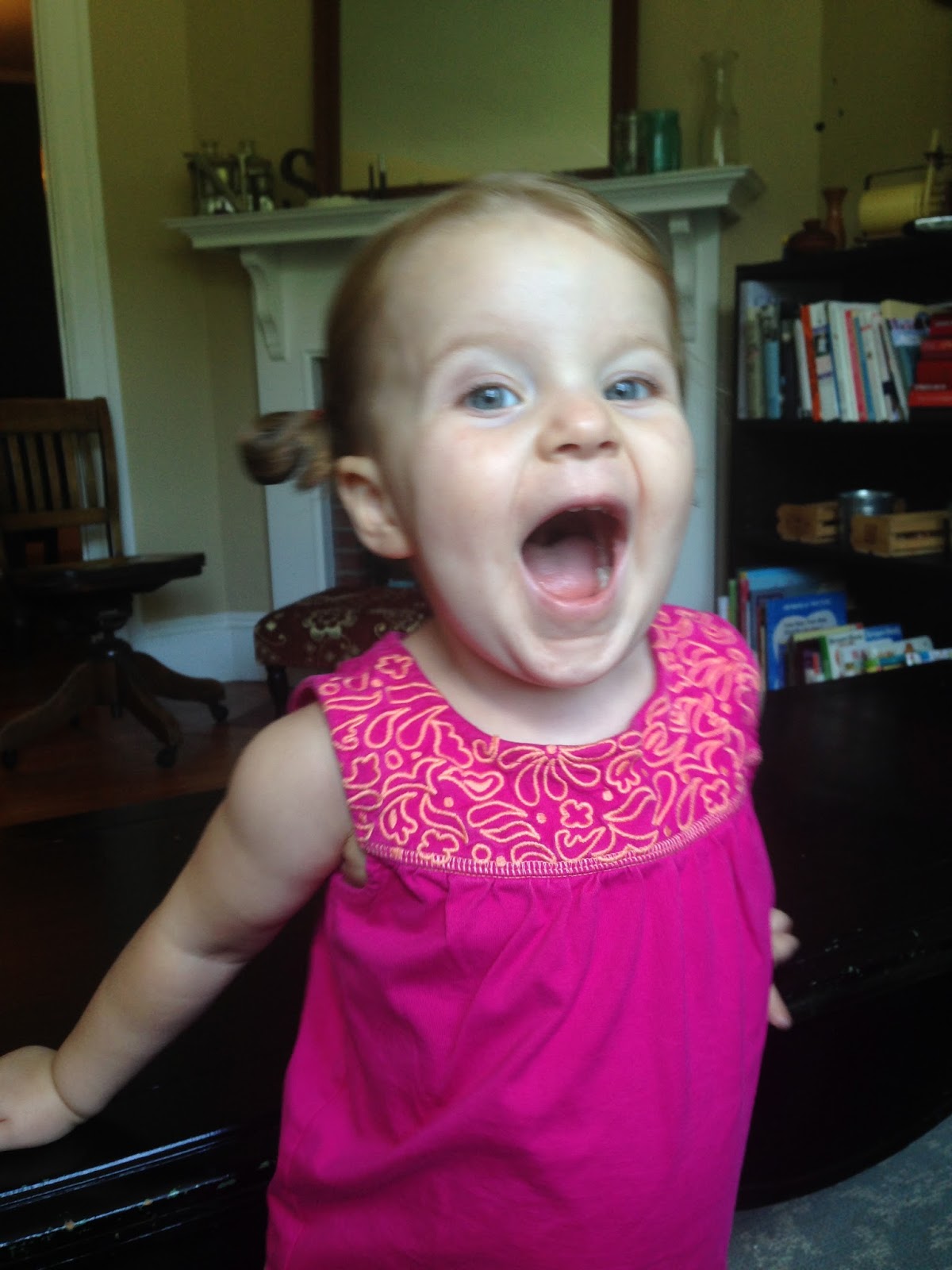 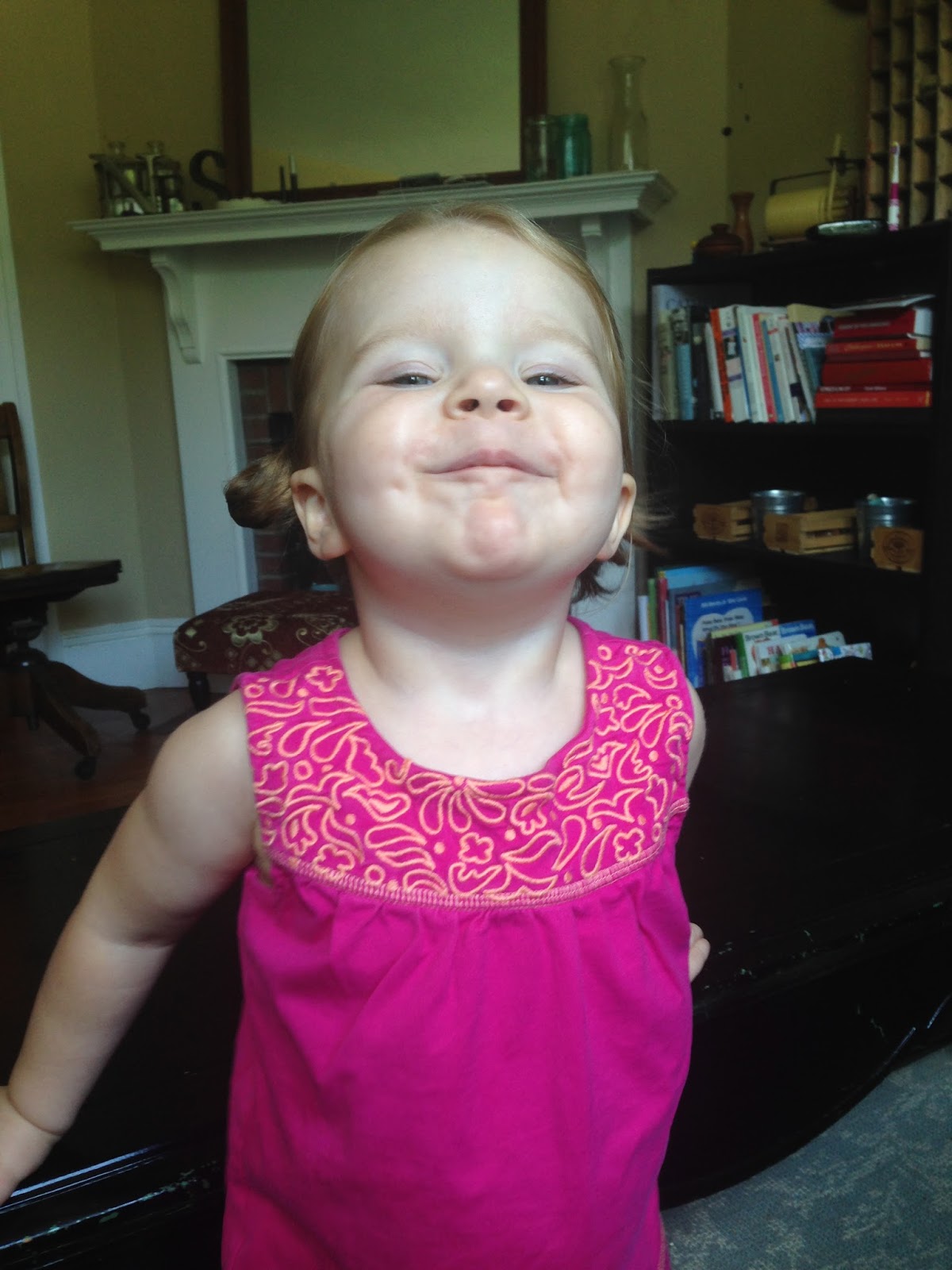 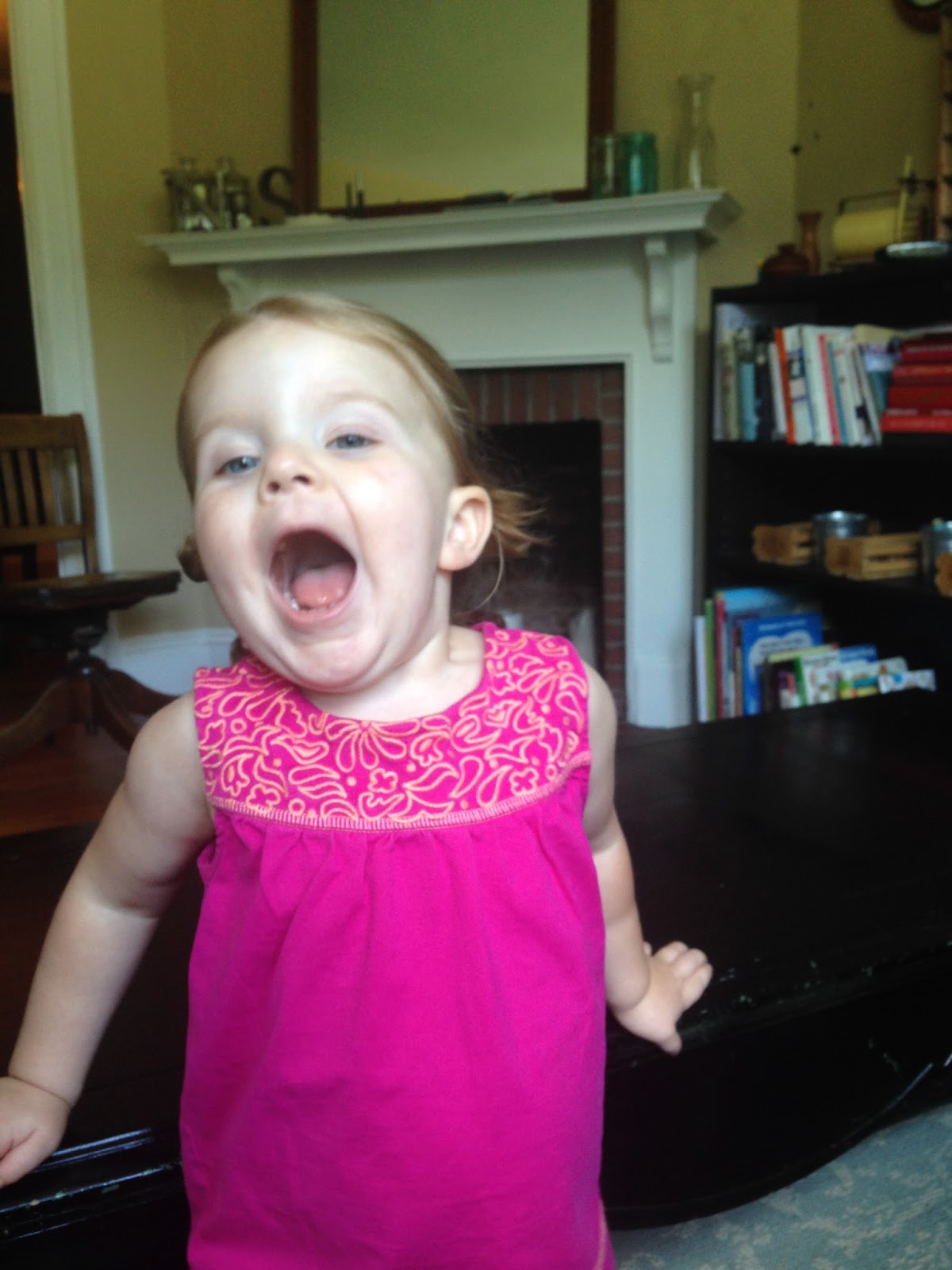 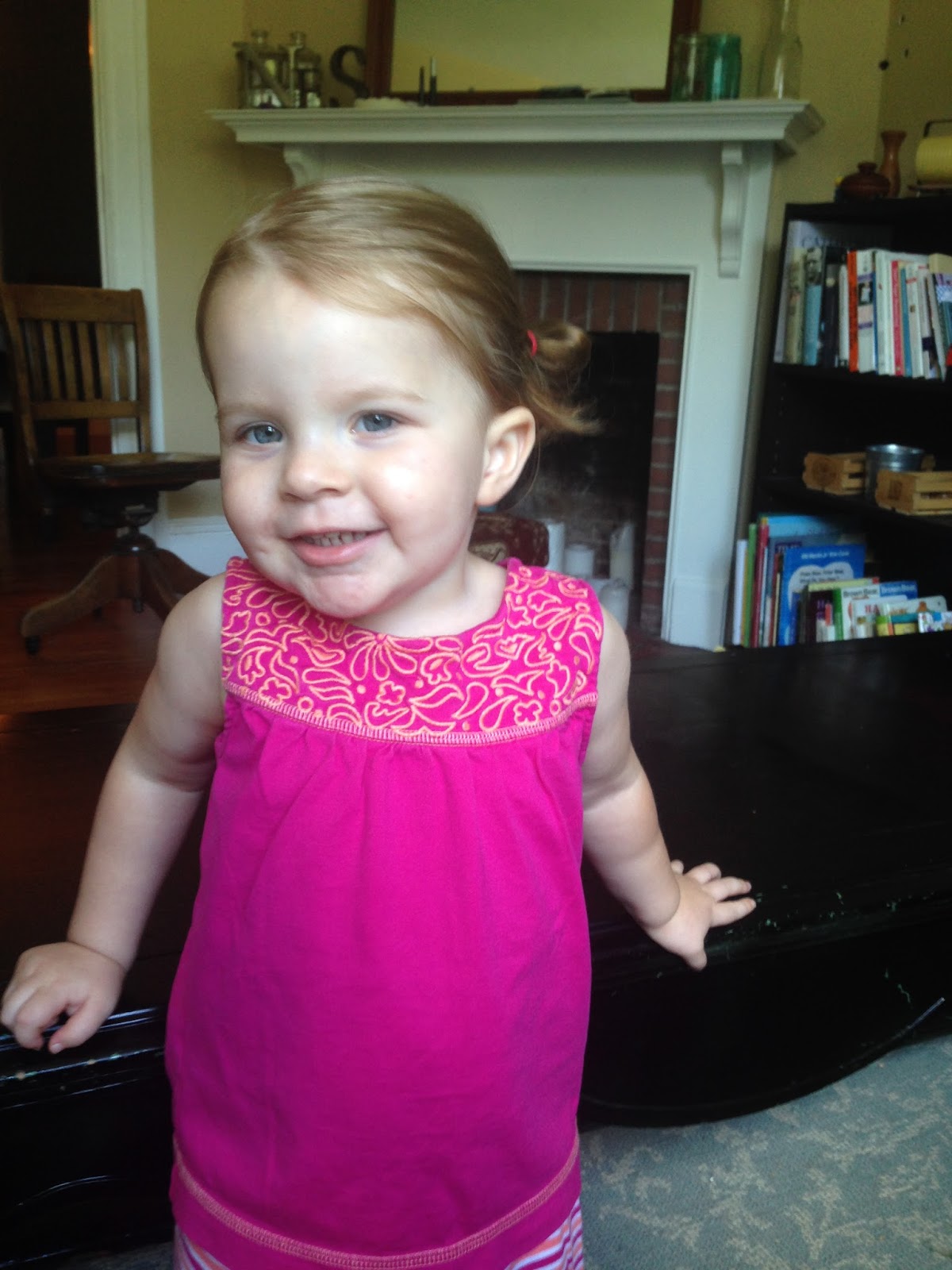 After bringing you a post like the last one, it seems I should try to offer the world something of beauty too, and not just the crazy and the chaos and the mess.

Something of beauty being, of course, my kids.

And the ring sling I sewed to carry them around!

I made it with Ree in mind, for as much as I love my fabric wrap and my Ergo {and Nell always loved them both, too}, Ree wants to see the world, and is not as content to sit pressed up against my chest unless she is really tired and ready for some serious sleeping.  Awake and alert, she wants to face out.

It seemed like everywhere I looked on the blogosphere, mamas were carrying their babes in those gorgeous Sakura Bloom ring slings.  I did not, however, think I would be able to sell my husband on the idea of spending $100+ on yet another way to carry the babe around.  The solution, of course, was to make my own. 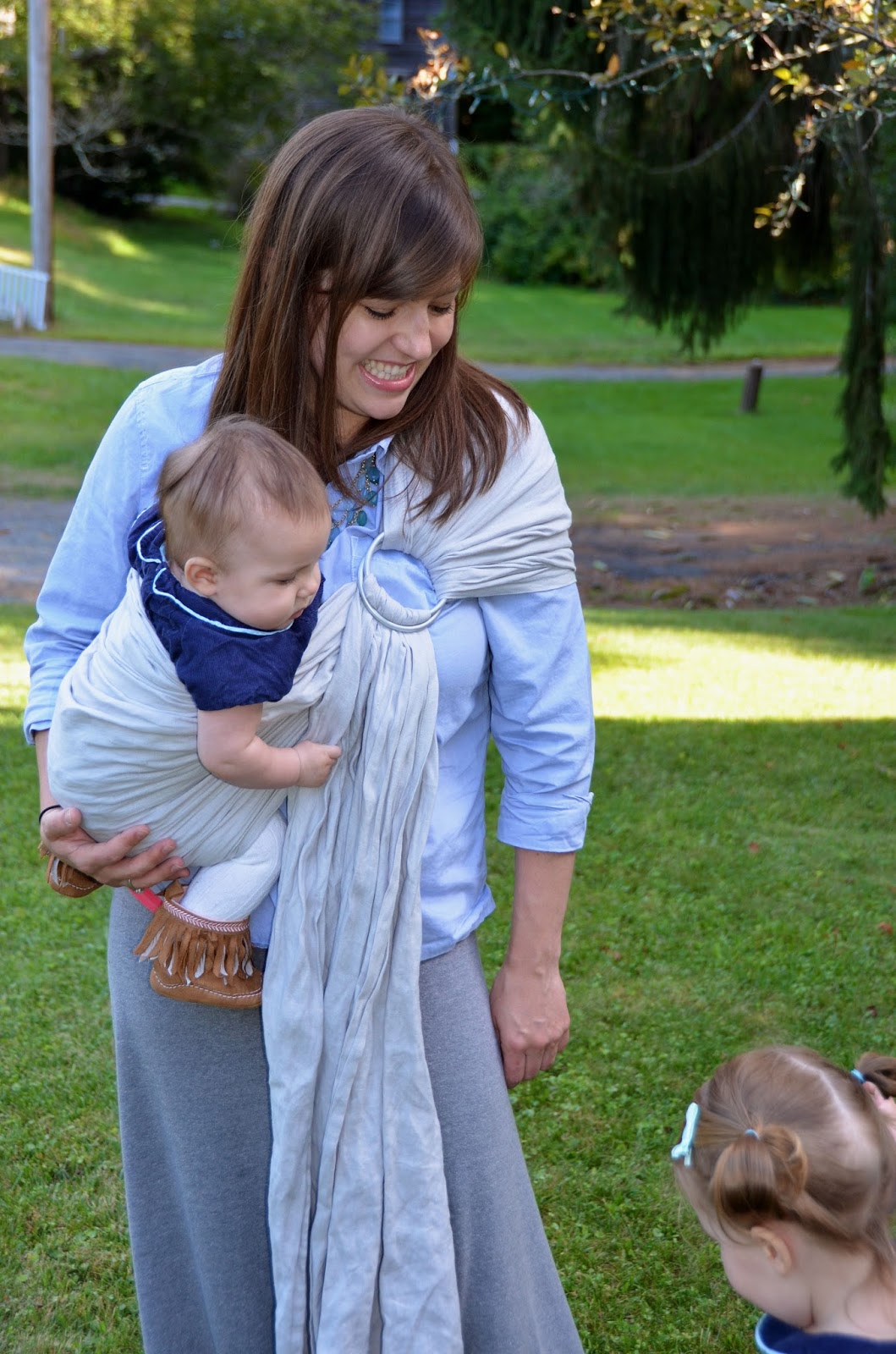 A lengthy cut of pretty grey linen, sturdy rings from slingrings.com, a tutorial from Jan at sleeping baby productions and a little extra info on doing a gathered shoulder, and I was in business.  Easy-peasy.  And I saved myself a lot of money.

Following the one-size-fits-all approach from the tutorial yielded a sling that is definitely longer than I need it to be, so I'm planning to trim and re-stitch the hem on the tail soon, but aside from that I'm quite pleased with it. 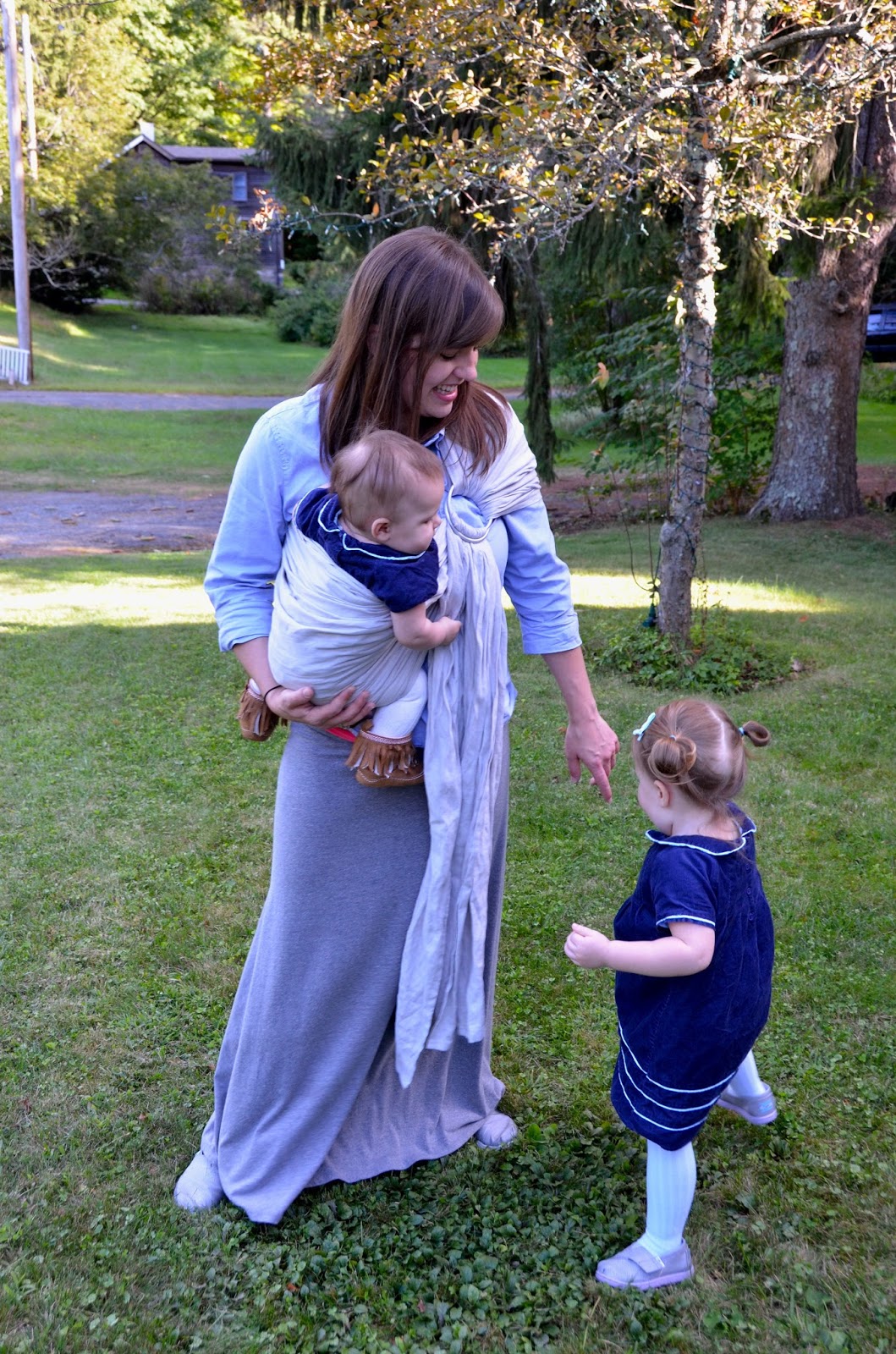 Ree is so snug and cozy in it, and can look around when she wants to or snuggle in close and doze when she gets sleepy.  And as it turns out, Nell loves it too!  She has a way of asking for "Mommy hugs!" just when I'm trying to slice oranges and scramble eggs for breakfast or put the finishing touches on dinner, and being able to pop her in the sling is the perfect solution: Nell feels hugged and close to me and is happy as a clam, and I still have my hands free to do what needs to be done. 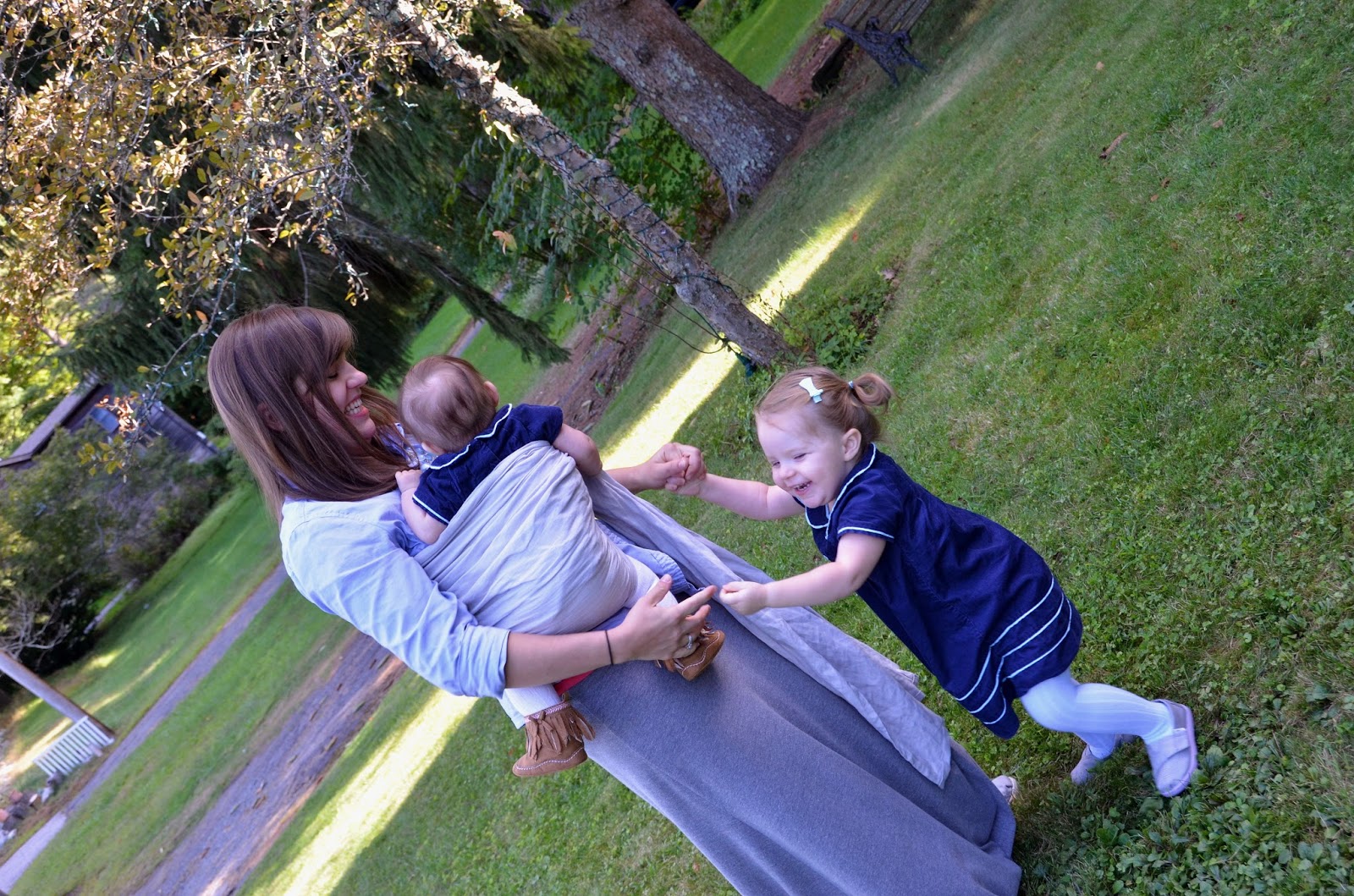 Oh, and since the sling kind of disguised the all-important fact that the girls wore matching corduroy dresses to church on Sunday: 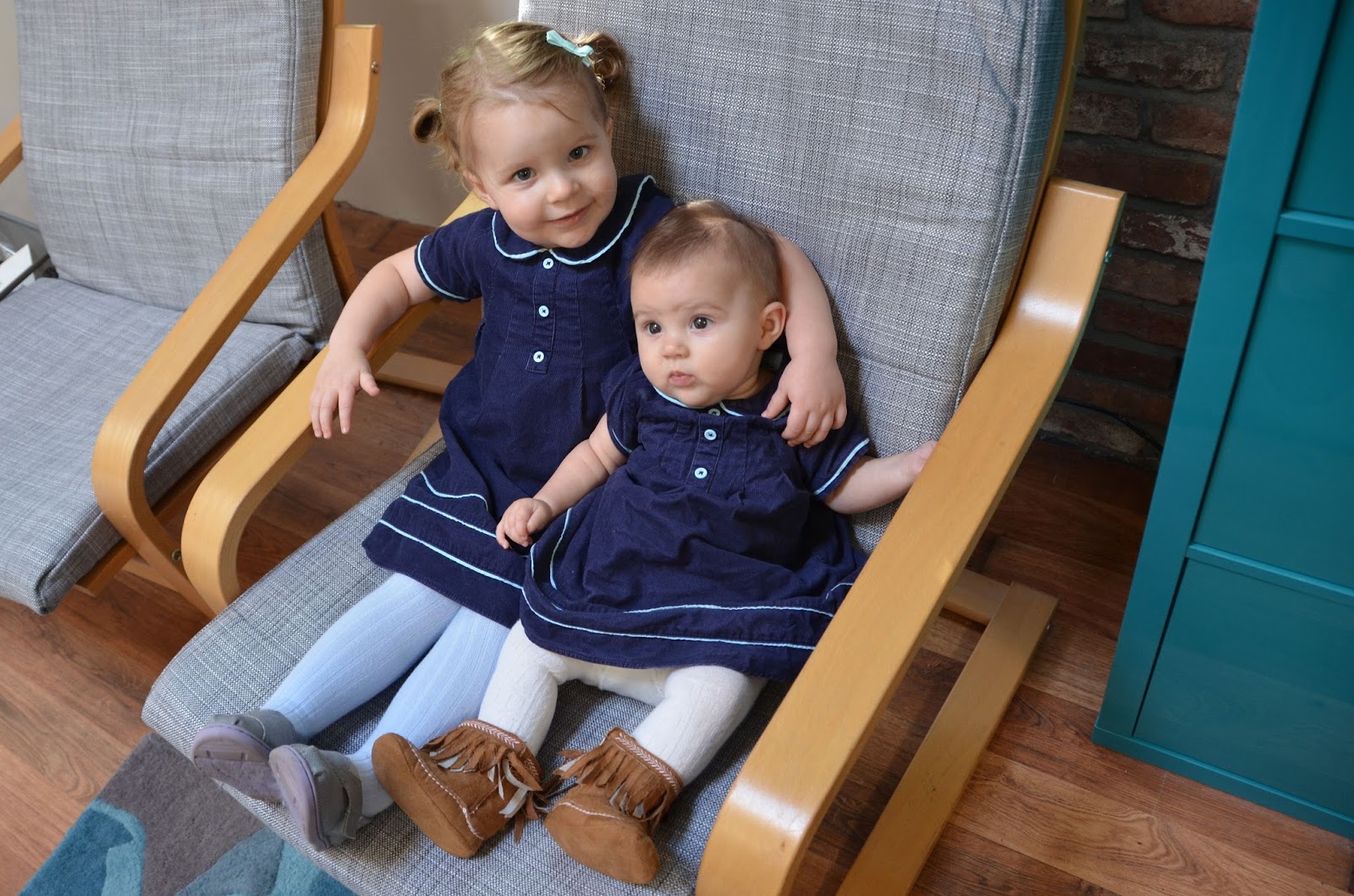 {A consignment find I'm pretty pleased with.  Every mother gets to inflict this kind of matchy-matchy scenario on her daughters at least once, right?} 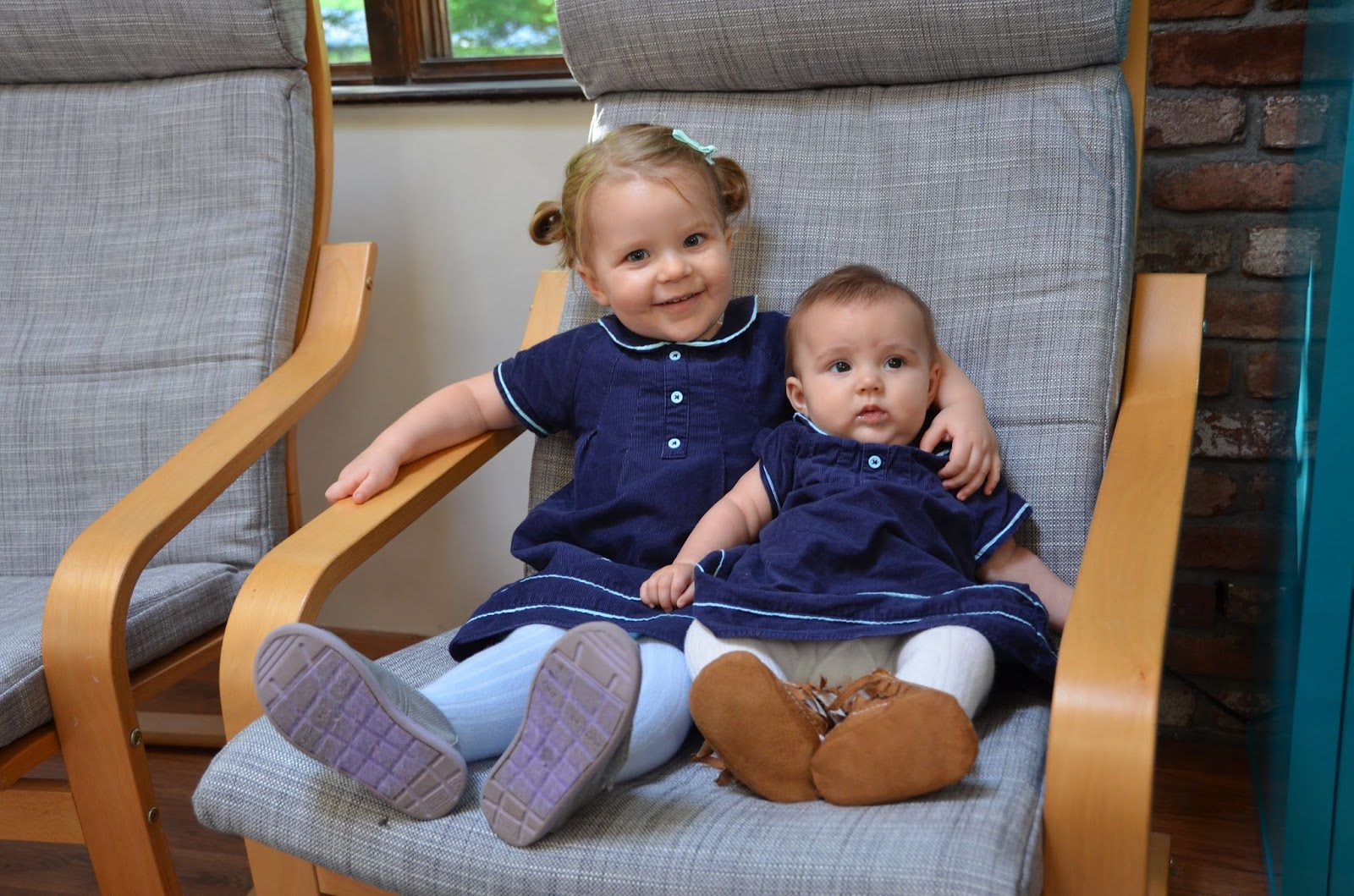 Ree was kind of unimpressed by the whole phenomenon, but don't try to tell me your day hasn't been made.

I don't know how some people do it, really I don't.  How is the world full of people who manage to make their homes look perfect, like something out of a Pottery Barn catalogue, and keep their children always looking ready for a Crew Cuts photo shoot, and then still have time to blog about it all?

My life isn't perfect.  My home is quasi-disastrous at times.  My two-year-old's hair is often unkempt and my four-month-old has a bald spot in back.  And I don't even have time to blog about how imperfect it all is.

** Full disclosure: These images are not photoshopped.  I'm stating this for the record, because they are so amazing, you'll be tempted to think they were edited to achieve this level of perfection. **

This is a pile of Nathan's work gloves, knee pads, and masks that has been sitting on our staircase for about a month.  I keep moving them to the basement or somewhere else less objectionable, and they keep winding up here again after another evening's hard work on the attic project. 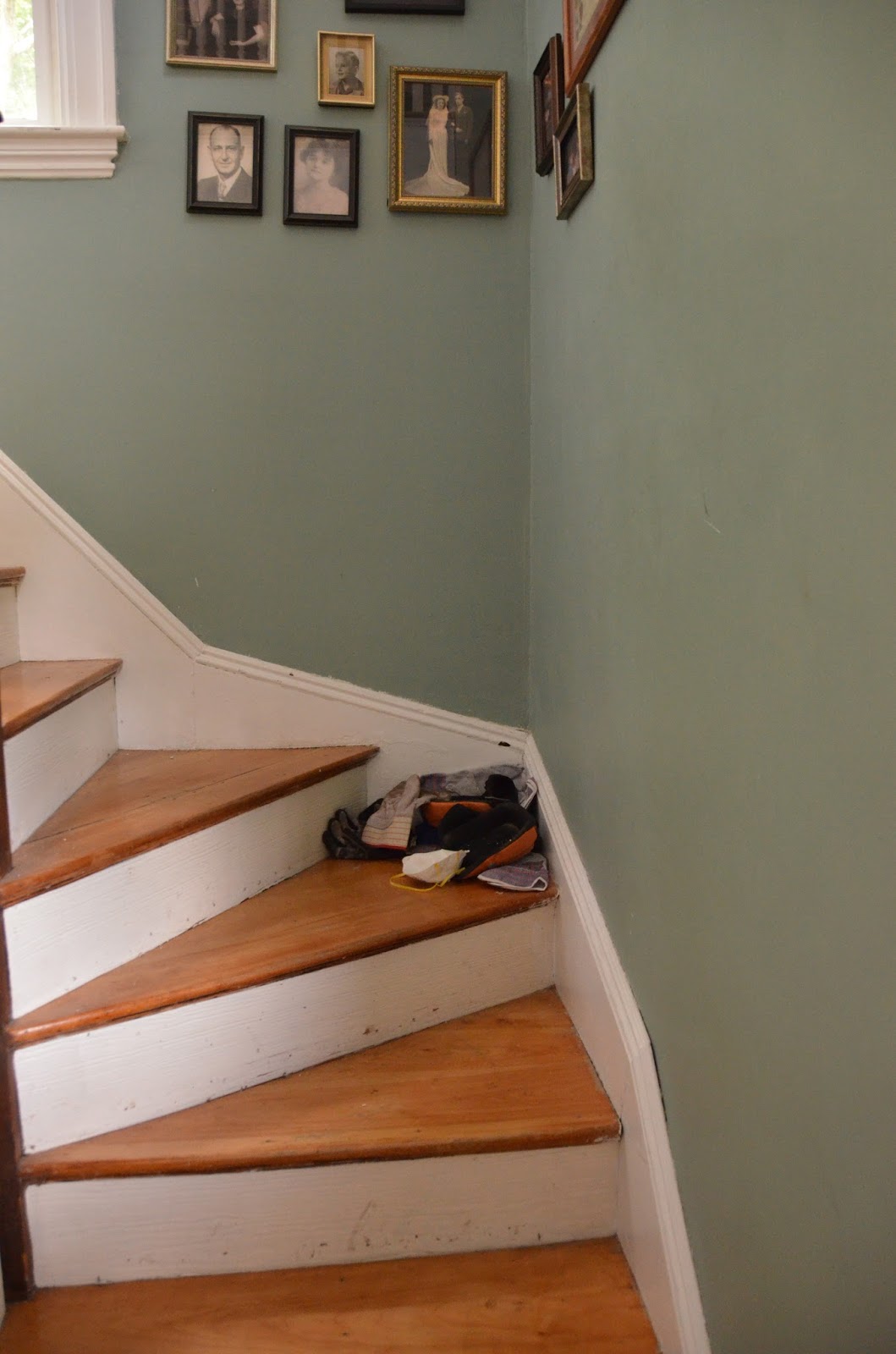 This is our kitchen floor, right next to our kitchen table.  The kitchen table that is usually covered with tools, or at the very least, bills and other mail needing to be sorted and dealt with.  You might think this is a garage or basement due to the extremely sharp and dangerous electric saw sitting there, but no, it's my kitchen floor.  I should have gotten a picture of the time Nathan stored it in the nursery for a couple of days. 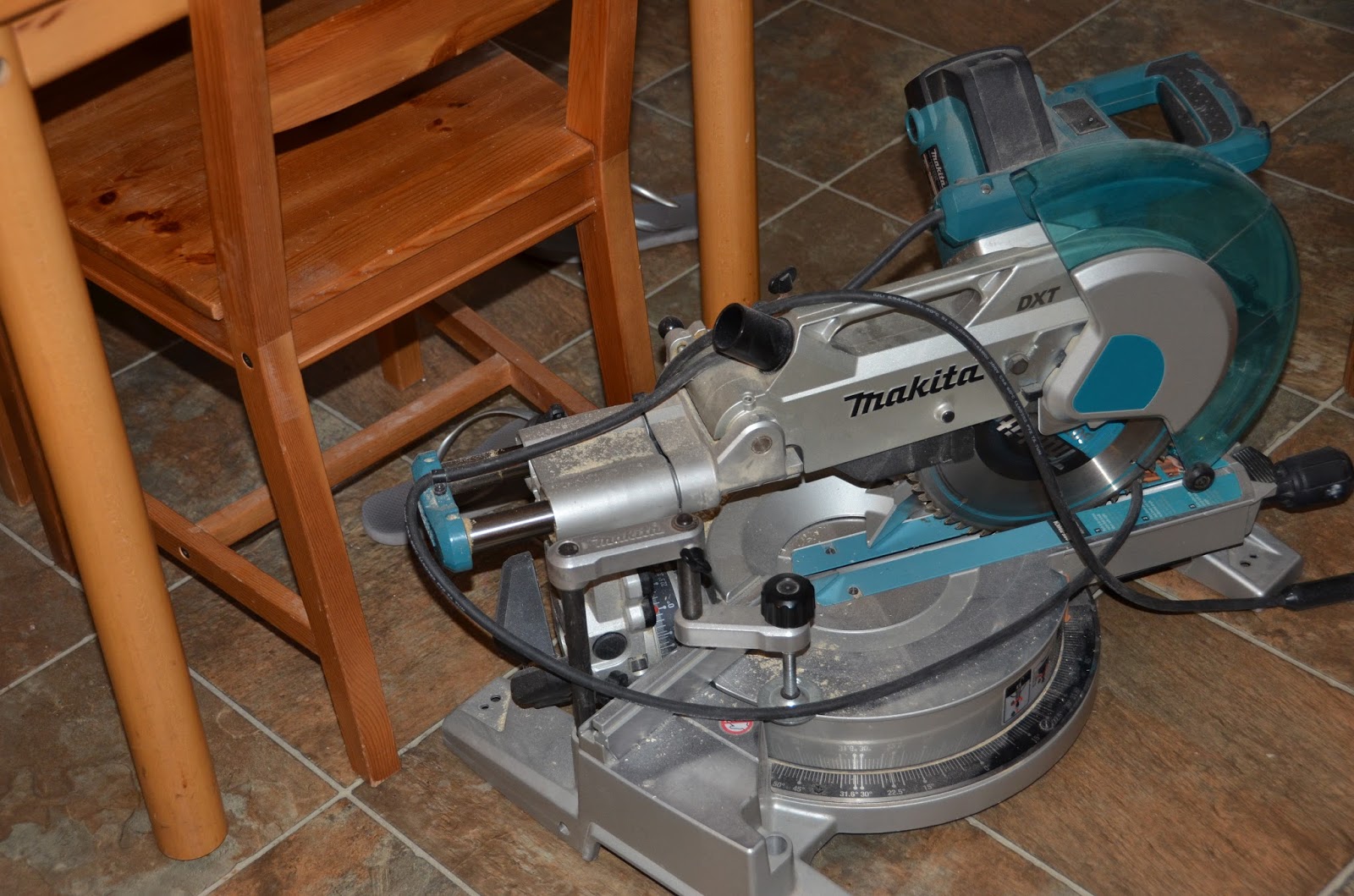 This is our little screened in porch.  We have plans to fix it up someday and try to make it somewhat pleasant.  In the meantime, we have a lovely wooden swing my Dad made us, and we like to swing on it.  Nell has a sweet little adirondack chair, as you can see, and she likes to sit out on the porch, too.  And for some reason, Nathan sometimes puts his blow torch out here.  Because that's normal.  And safe.  {Don't worry; I hastily removed said dangerous object.} 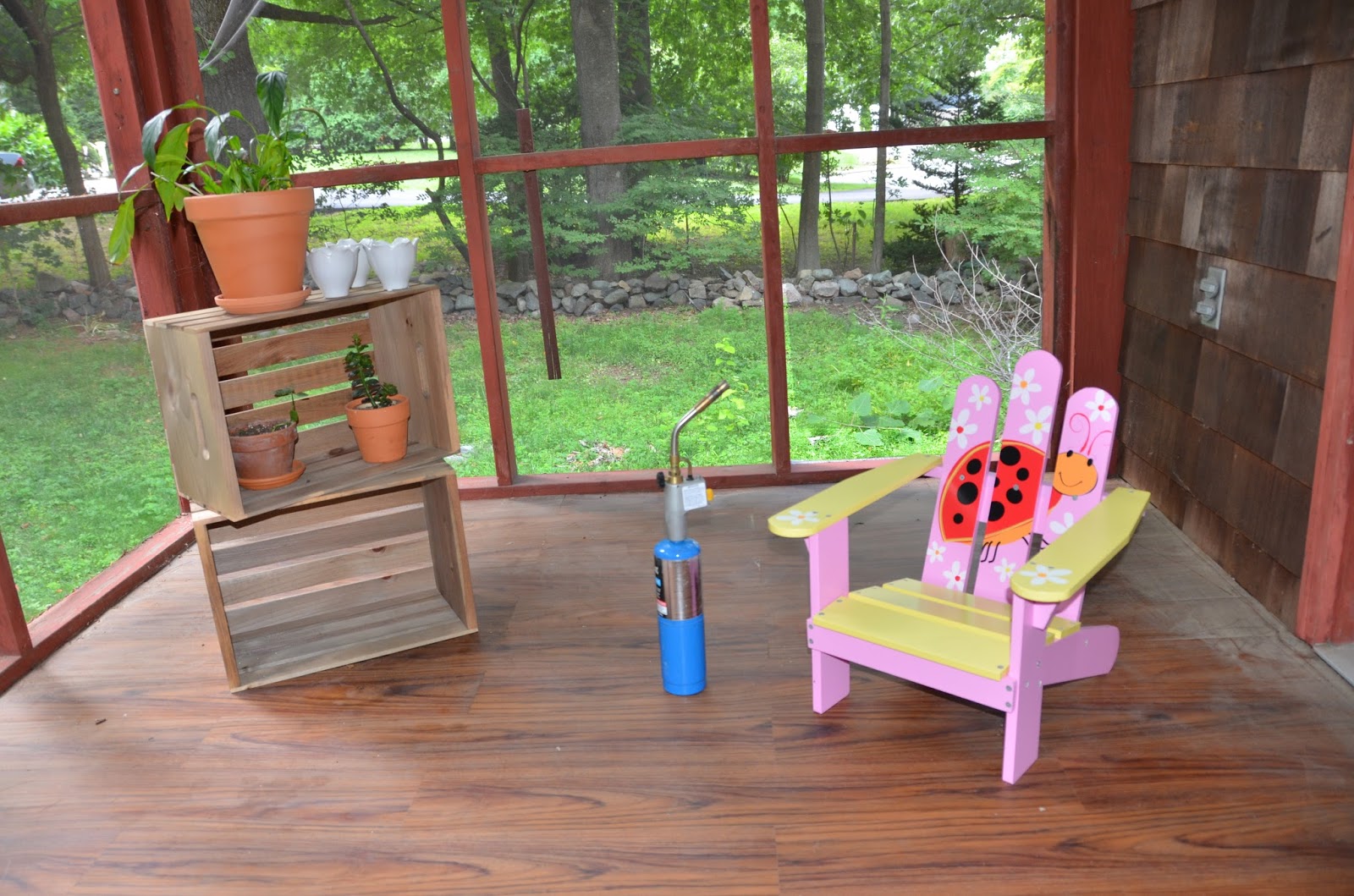 This is the area at the top of the stairs, looking into Nathan's home office space.  During the course of the attic renovation project, Nathan's office became increasingly filled with tools, light fixtures, empty boxes, wood scraps, and other sundry items to the point where it is now hazardous to even attempt to walk through the door.  I needed to access the printer the other day to print some things for my violin studio, and I almost died. 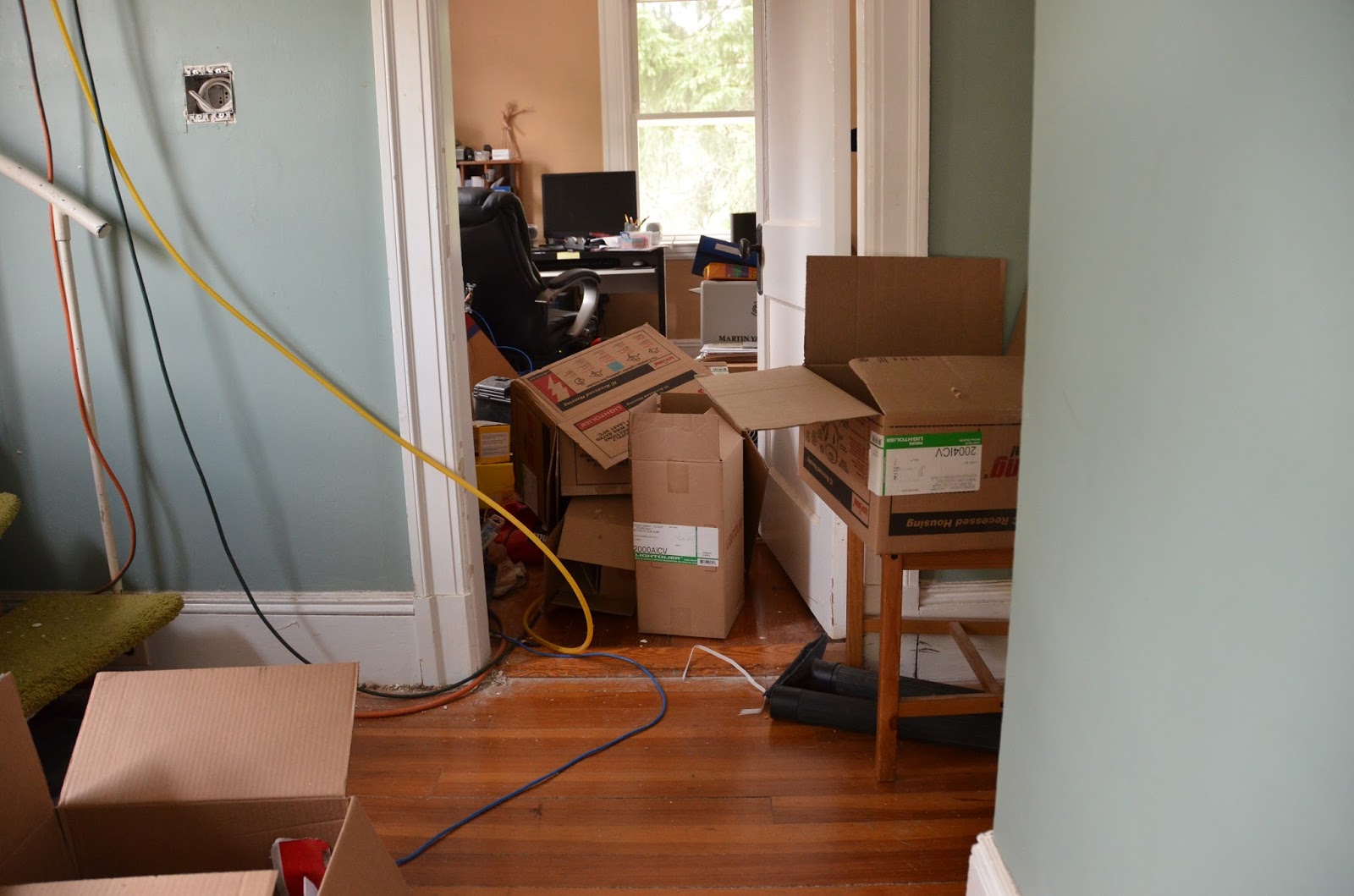 Don't believe me?  How about a close-up? 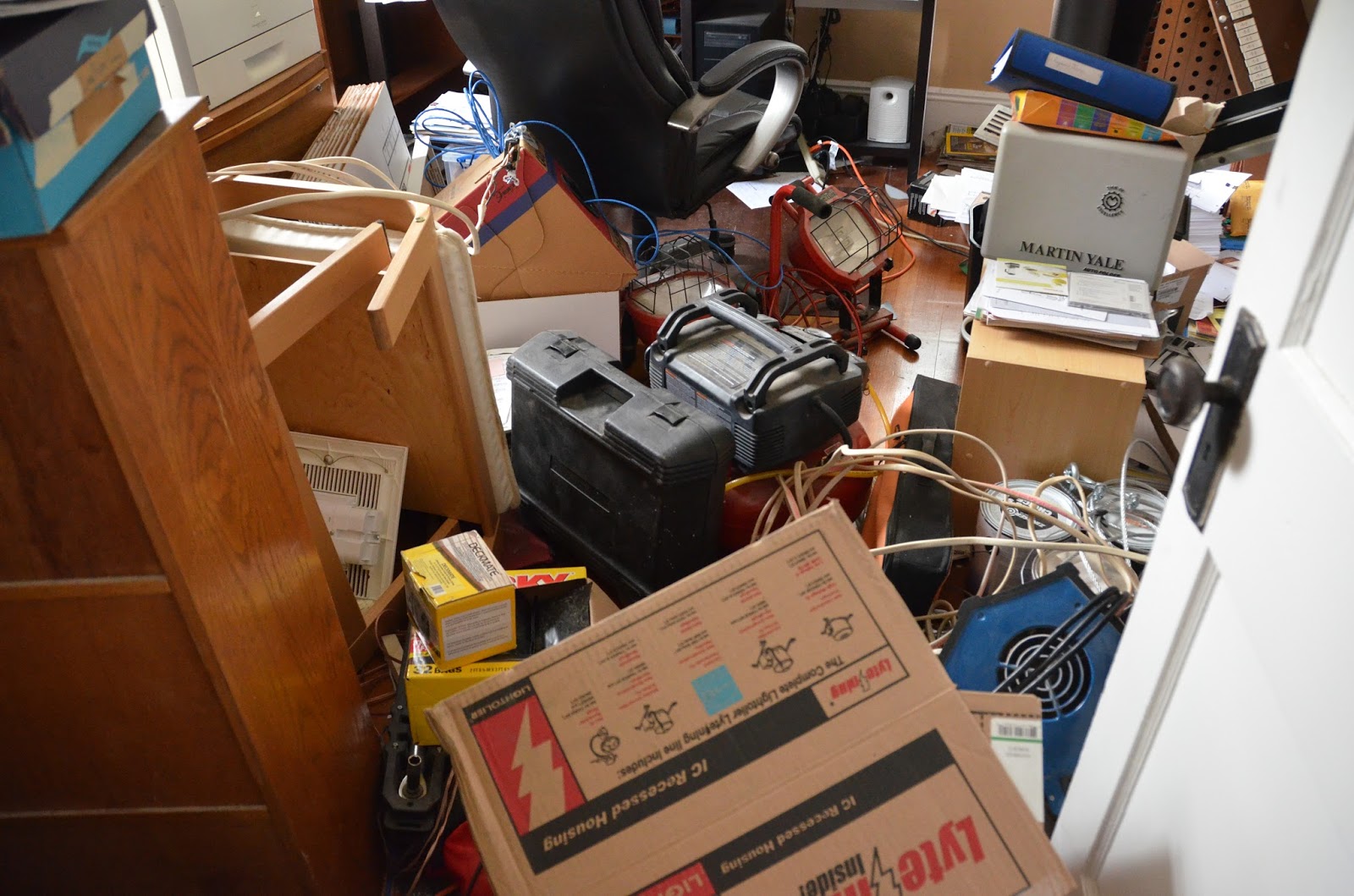 I'm pretty sure someone could break into our house and ransack that room, and we wouldn't even notice.  Ever.

Poor over-worked Nathan.  One of these evenings, now that the attic project is essentially complete (!!), we're going to tackle that office.  I'm going to help him, because if he gets buried alive, I want to be there to dig him out.

This is standing at the top of the stairs and looking to the left, where the spiral staircase is that goes up to the attic.  You might be horrified by the green shag carpet on those stair treads... or you might not even notice that particular feature due to the mountains of, um, stuff.  Stuff that used to be stored in the attic prior to the renovation project commencing.  Stuff accumulating from the project as it unfolds.  Plus bonus stuff the origins of which elude me. 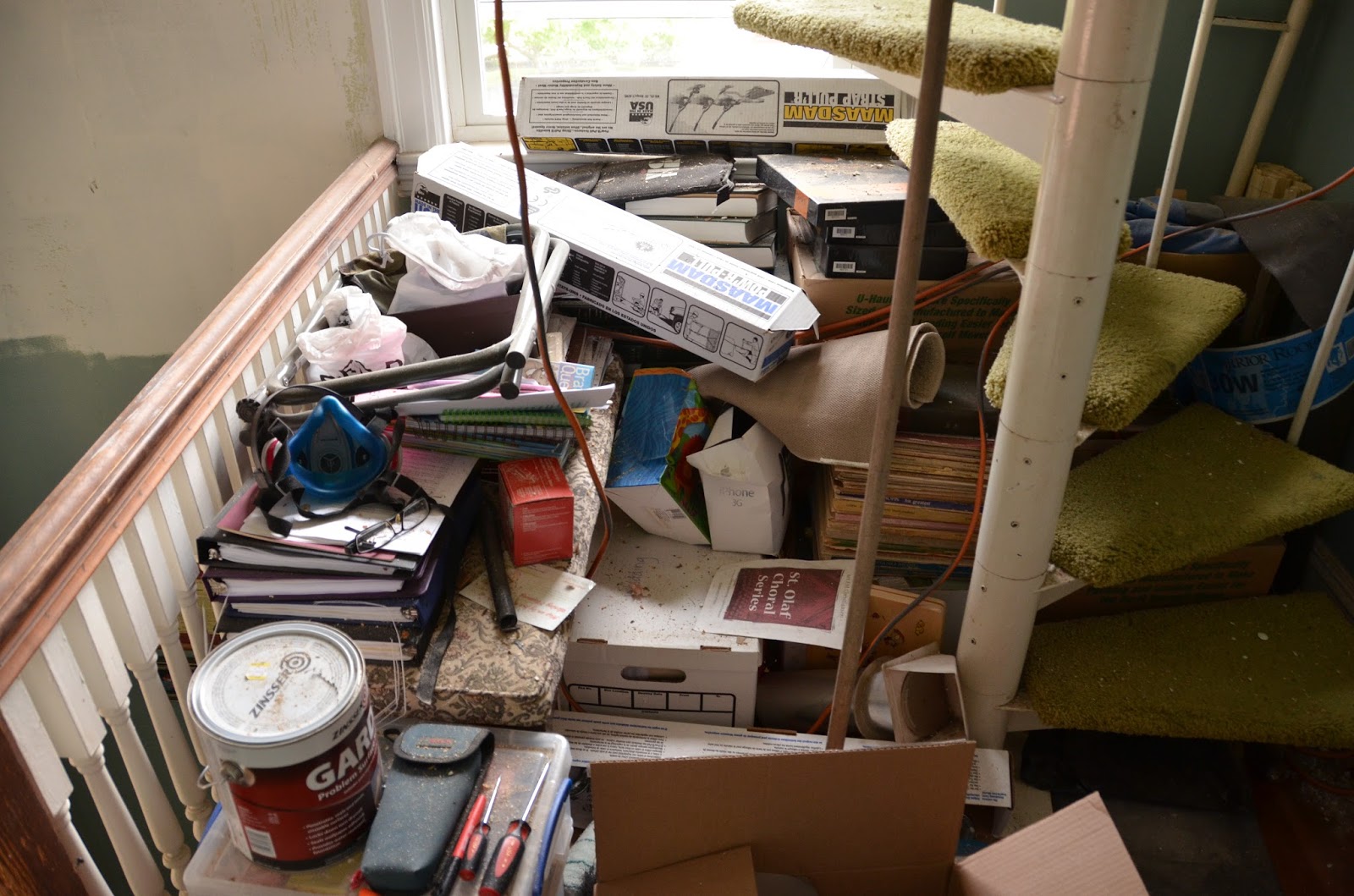 This is the bedroom next to Nell's room, the room I'm planning on turning into her "big girl room."  All it really needs is a new light fixture and it should be move-in-ready, right?  Well, if the brother-in-law can get his stuff out of there.  Which, in his defense, is probably impossible because there's so much of it where would it all go?  I'm beginning to think this may be his permanent storage unit.  That's okay; Nell and Ree can share a 120 square foot room. 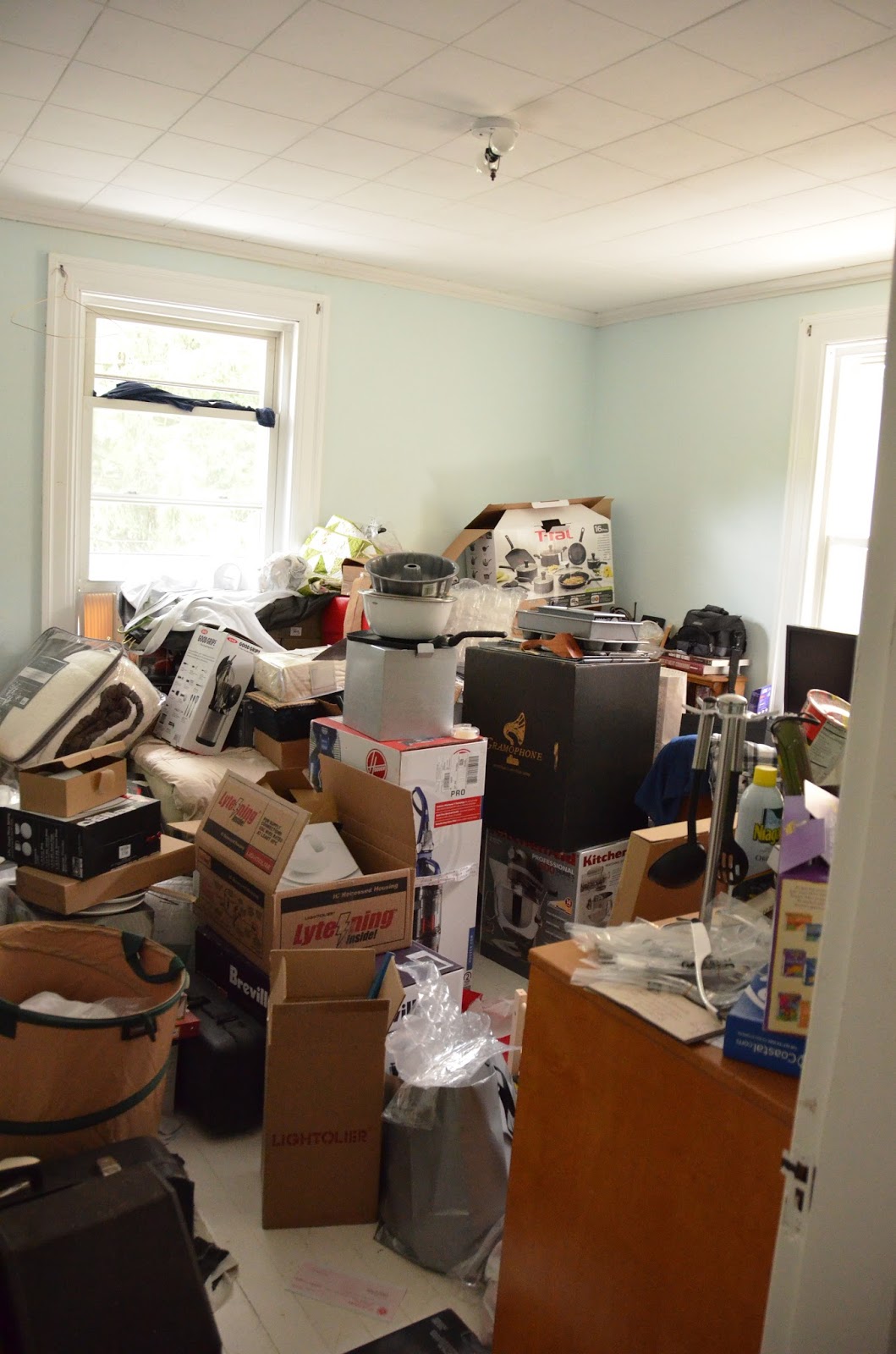 This is a little section of our back yard.  Back when I was about 41 weeks pregnant with Ree, I cleared all those branches from an area next to our garage to try to make that space a little nicer, and carried them as far as I could muster the energy to carry them.  Then Ree was born, and the branches lingered in that lovely spot.  The grass and weeds grew up around them since we couldn't mow that area. 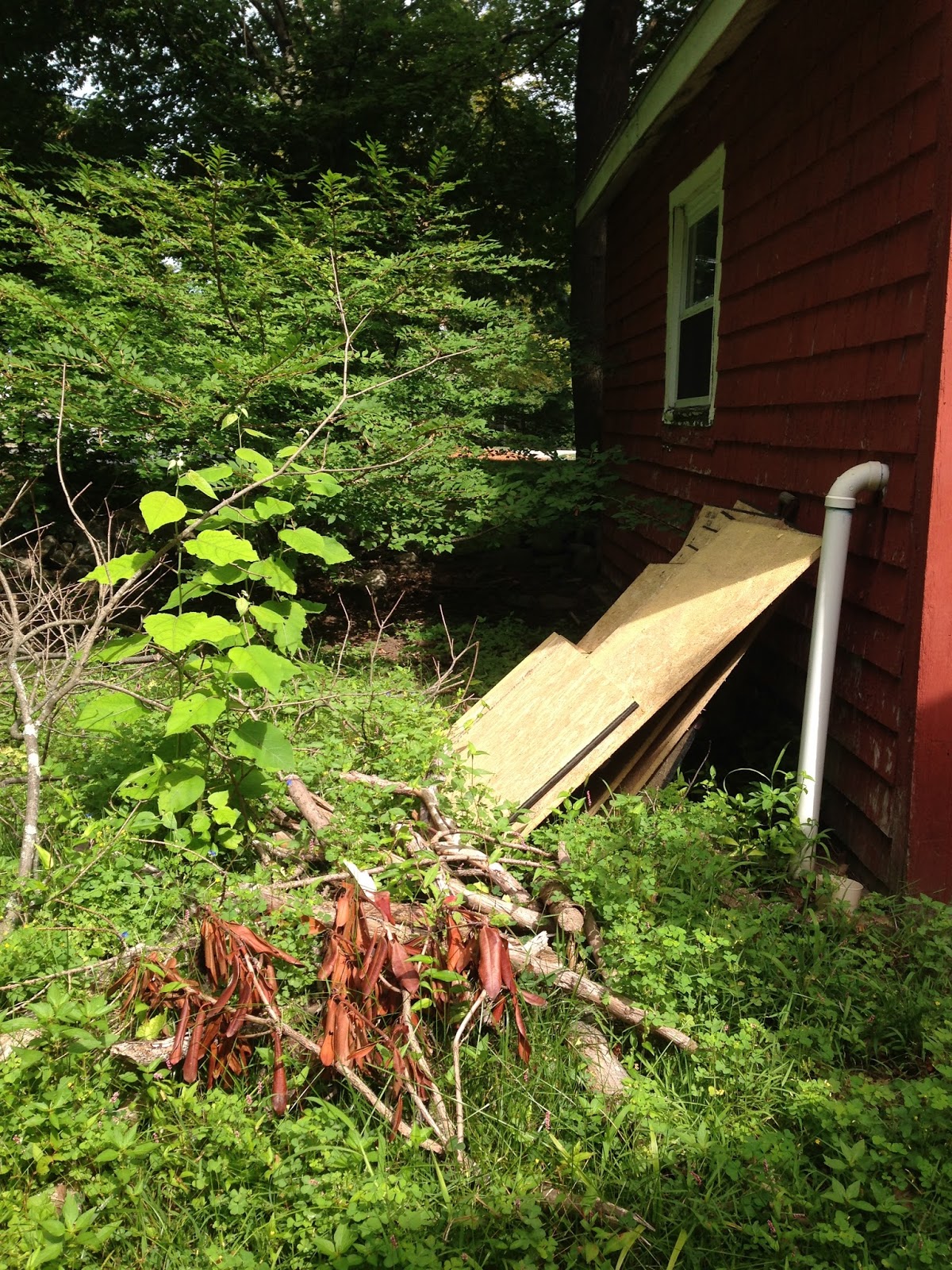 And on the left hand side there, yes, that is a weed that grew too tall and too large to bear its own weight. 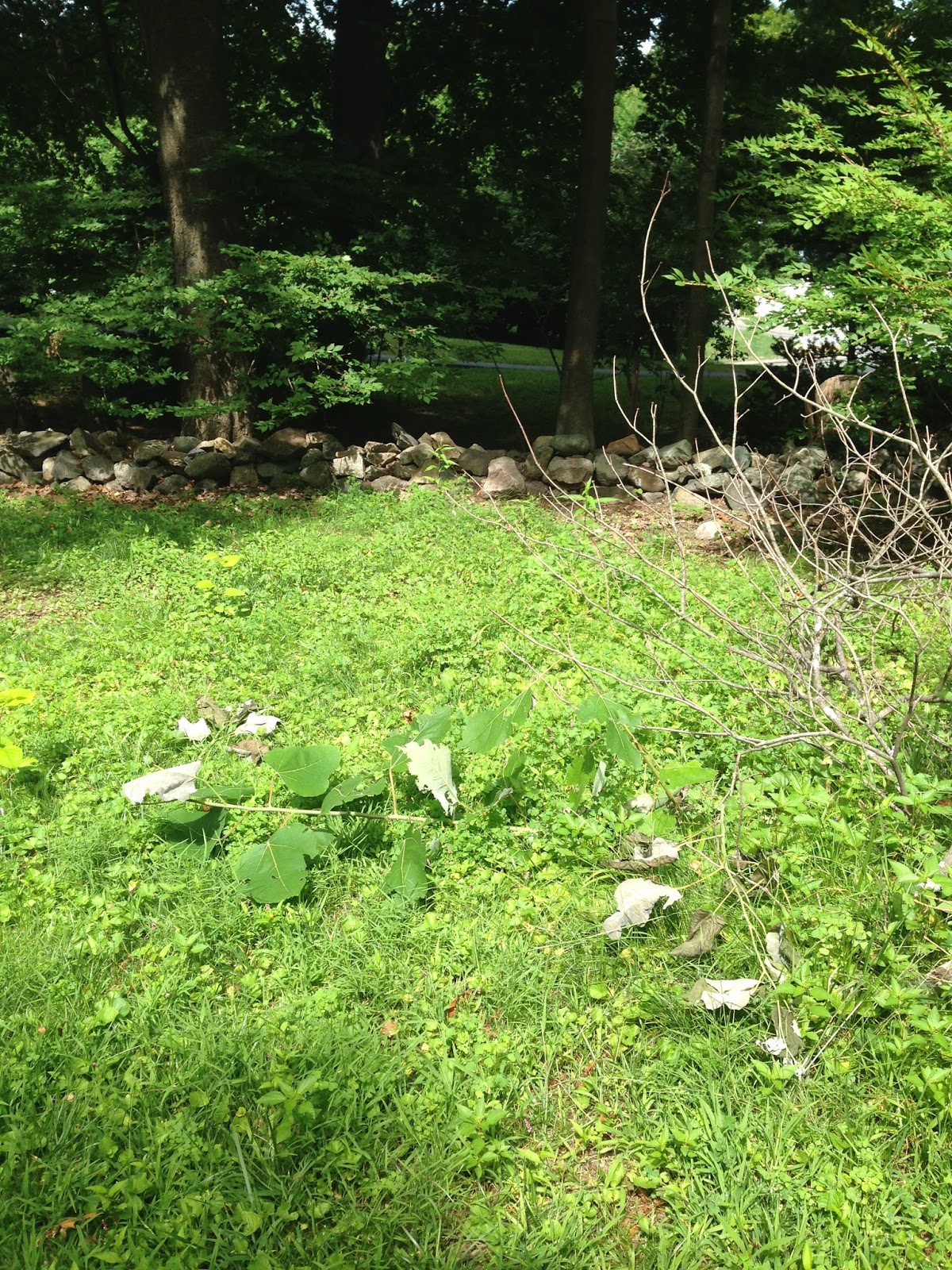 I'm kind of picturing that little emoji emoticon of laughing until you cry.  It seems somehow fitting.

So go on, friends, pin away to your Pinterest boards!  If this life of ours isn't Pinterest-worthy, I don't know what is.