Playing a Christmas carol as a duet with a student who has been making great progress since beginning lessons with me last year...

Being surprised to feel my heartstrings unexpectedly tugged by the experience...

Seeing the neighbor's Christmas lights twinkling outside my window as we play...

Seeing her mother's face shine as she listens to her daughter play...

A moment of calm contentment amidst a busy, stressful time of year...

Posted by sarah marie at 3:40 PM No comments:

Tidings of Comfort and Joy

This year marked the first Black Friday on which I've ventured out and braved the crowds to snag some bargains. It ended up being fun despite the long lines, and when the bottom of my receipt from Kohls read "You saved: $400," I began to see why so many people find it worthwhile to shop the day after Thanksgiving.

Among other things, Nathan and I found a much-needed new set of sheets marked down from $80 to $19.99.

They are flannel, and they are warm and cozy, and they bring new meaning to the phrase "comfort and joy."

[Having a holiday was so nice. I wish Thanksgiving break extended until, oh, I don't know, June.]

Posted by sarah marie at 6:17 AM No comments:

A silver lining to our cancelled trip to California is, I suppose, that we didn't have to get full-body-scanned or groped.

I admit I got a good laugh out of this college kid, who made the news when he took it a step further than removing his shoes and belt - he stripped down to his speedo to walk through security. "This is a safety precaution," he claimed. "Just making sure I don't have any trouble!"

While the video he made of his little protest is humorous, airport security certainly isn't something I want to deal with these days.

Posted by sarah marie at 5:13 PM No comments:

We were going to be in California for Thanksgiving this year. We were excited to go, but on Monday my parents called to let me know that most of Nevada County has lost power, and doesn't expect to have it back until after the holiday. Out in the boonies and on a well, no power means no water. Which means, of course, no showers, no flushing toilets, and other such difficulties. After much consideration, we decided to cancel our flights - a click of the mouse with which I shed a tear - and drive to visit Nathan's family in Erie, PA, instead.

Judging from this photo, it would seem that while I am complacent, Nathan is horrified at this turn of events. 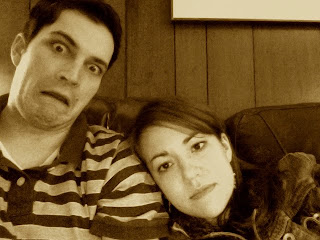 [Or maybe we are just having fun with the Photo Booth program on Shiny.]

Bro-in-law Andrew is here, too. 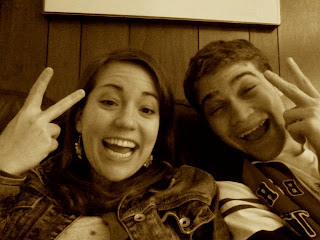 Posted by sarah marie at 4:58 PM No comments:

"Symphony of a Thousand"

A week ago, I came home from an evening rehearsal convinced that the only thing worse than a 12-hour-non-stop day, already very exhausting and headache-inducing, was ending said day with eight Mahler soloists belting from their location only two feet behind my head in a rehearsal for Mahler's 8th Symphony, the so-called "Symphony of a Thousand."

It was a big undertaking for the two orchestras and three choruses combining forces for the performances. It was much talked about.

Last night I came home from the second and final performance of the symphony convinced that it was worth it.

It was worth a week of 8am to 11pm days. It was worth experiencing real, aching pain in my ears from the proximity of the soloists.

It was an experience.

At the end of it all, the conductor cried.

It was, apparently, "A Tsunami of Ecstasy." (Gee whiz.)

I'm happy to say that I slept eight hours last night and I feel like a new person. A person who can survive the next couple of days until Thanksgiving break begins.

Mahler 8 is, in short, about redemption. The first part, set in Latin and based on the text "Veni, creator spiritus," and the second half, a German setting of the final scene from Goethe's Faust, are unified by this concept. Redemption.

Of course, skipping to the end of such a work is cheating oneself of the whole experience, but in case you're the kind of person who reads the last chapter before deciding whether or not to read a book, here you go: The Vienna Philharmonic, conducted by Leonard Bernstein.

Posted by sarah marie at 8:32 AM No comments:

Tonight, in the middle of a rehearsal, I sneezed so hard I tweaked my back out, and didn't regain a full and comfortable range of motion for fifteen minutes.

It was weird, to say the least.

Last night I dreamed that my sister Emily stole my crystal deodorant and refused to give it back.

These are the kinds of deep-seated fears that haunt my subconscious.

Posted by sarah marie at 8:27 PM No comments:

"Let the Rest of the World Go By"

Grandma and Grandpa loved the song "Let the Rest of the World Go By," and were particularly fond of the instrumental version from the film "Out of Africa." They used to sing it to us when we were little, and sometimes they'd hum it and dance together in their living room. Through them, I grew to love this song. One summer when I was home from college, I searched around on iTunes and bought a dozen or so of their favorite songs from years gone by, and made them a mix CD. I put the version from "Out of Africa" as the final track on the CD, and I still remember them swaying in each others' arms while they listened to it.

Grandma and Grandpa used to tell me that when they first moved to California - my Dad was a young kid at the time - they sang it the whole car ride across the country. There's a line that goes, "We'll build a little nest, somewhere in the west," so it became their theme song for the trip as they moved to the west coast after having lived primarily in the south.

Shortly after Grandma passed away, I found myself listening to this song for the first time in a few years, and I wrote a little "arrangement" (if you can call it that) for violin - basically just the nice, shmaltzy thirds and sixths everywhere just like on the recording I have. At the request of my Dad, I'll be playing it at Grandma's service in California this weekend.

The instrumental version I love is the John Barry arrangement, and it's available on iTunes, or you can listen to it for free on Rhapsody (track 10).

With someone like you, a pal good and true
I'd like to leave it all behind and go and find
Some place that's known to God alone
Just a spot to call our own
We'll Find perfect peace, where joys never cease
Out there beneath a kindly sky
We'll build a sweet little nest somewhere in the west
And let the rest of the world go by

It's a nice song. I love how music can be so dated, and yet so timeless.

A conversation with my young student Eli:

Eli: How old are you?

Sarah: Hmm, how old do you think I am?

Sarah (horrified now): Didn't your parents teach you to always guess low? Or wait, were you already doing that? Don't answer that.

[I'm trying to console myself with the knowledge that children are notoriously unaware of age differences past the age of 18, and I was once that way myself. But I really wasn't ready to have a full decade added to my age! So thanks, kid.]

Posted by sarah marie at 7:16 PM No comments:

One week ago Nathan and I both had papers to work on during the course of the same evening, and realized that we were probably not realistic to think that we could make it through two years of simultaneously being in grad school with one desktop computer to share.

We took a trip to the Apple store. We weighed pros and cons. We concluded that while the new Air was sexy, the MacBook Pro was better suited to my needs. Also, it was more affordable, and came with a bigger discount for students!

I felt very nervous about spending money on a laptop, and after we got home I left my new MacBook in the box for about an hour before biting the proverbial bullet and removing her from her packaging so I could get to work on my assignment.

As soon as I pulled her out of the box, I hugged her to my chest and exclaimed, "SHINY!!!" while laughing gleefully. I was in love. Nathan pooh-poohed this spectacle, saying, "You're so weird." (No one understands me like you do, Shiny. Outsiders cannot understand our love.)

She has been called Shiny ever since, and even Nathan has begun to refer to her by her given name.

Oh Shiny, you sleek, beautiful creature. From grad school assignments to blogging (and everything in between), I think the two of us will have a great future together.