I've almost completed my undergraduate education - all five years of it. For the final three months remaining, however, I must continue to deal with what may be the most frustrating phone answering system in the history of the modern world. Something is very wrong with my college phone system. Not only that, but it's been wrong for the last three years, and shows no sign of future improvement.

Every time I check my messages, I must enter a minimum of 10 digits before I can listen to any potential messages I may have. Quite often, the central answering system informs me that yes, I do have new messages! I listen with anticipation... only to discover that once again, my 'messages' are fakes.

Most of the messages that are delivered to my phone consist of several minutes of hold music. I can't figure it out. No one can, really. There must be either a proverbial, metaphorical, or literal wire crossed somewhere in the system. It's the college hold music - the very same oboe adagios that my mother suffers through when she calls to ask a question about the semester tuition bill. Somehow, it keeps ending up on my phone messages. After the music has played for a sufficient length of time to raise my blood pressure to truly unhealthy levels, the message concludes with - you won't believe it - my own room's answering machine message. "Hi, you've reached Sarah and Cara; please leave a message." I'm sorry to say it, but the sound of my dear roommate's voice is starting to get on my nerves... at least in that context. A few beeps, a long pause, another beep, and finally: "End of message. To erase this message, press 7. To save it in the archives, press 9..."

And you see, dear reader, that is the worst of it.

You have to listen to the entire message before you can delete it.


P.S. I've been noticing the website EverydayHogwash.com, and I'm thinking of submitting this post. If the judges over there like it at all, there might be an opportunity for you, my faithful readers, to vote for me. I'll keep you informed.
Posted by sarah marie at 7:51 AM No comments:

Email ThisBlogThis!Share to TwitterShare to FacebookShare to Pinterest
A few notable posts:

Amber on family life - read numbers six and seven in particular.
Posted by sarah marie at 6:49 AM No comments: 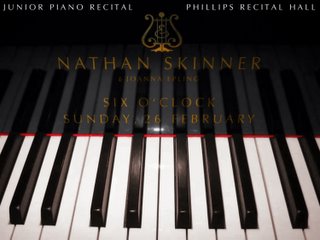 Four bows. A standing ovation. A fantastic eight-hands, two-pianos encore. 85+ people who support him and care about him. One very happy and proud girlfriend.

Roommate said: "I must say, in all my time at Gordon, I've only attended two recitals with standing ovations - yours and Nathan's!"

His mother said: "Thanks for making him so happy. You're good for him."

Wonderful.
Posted by sarah marie at 6:36 AM No comments:

My Mom, A Movie, and Music

Well, the concert went okay - not perfect, but okay. Now I can start worrying about my senior recital. Oh yay.

It was so great having my Mom here for a visit! She and FavoriteBoy and I got to spend a lot of time together, which was nice. She even stayed through Sunday just to hear him play at church!

In other news, I give Elizabethtown two thumbs up! Aside from one unnecessary bit when the mother is speaking at the memorial service, I thought the whole movie was completely fabulous. Very thought-provoking. I highly recommend it.

Finally, tonight is FavoriteBoy's junior piano recital! Bach, Beethoven, Ravel, Chopin, and Mozart... he is going to do a wonderful job.
Posted by sarah marie at 9:29 AM No comments:

1) FavoriteBoy played harpsichord in a concert my teacher played/conducted with the Lexington Sinfonietta. I was so proud of him I almost burst into pieces. He repaired the school harpsichord himself; while all the other folks at the school were discussing financial matters about repair, he just poked around a bit, and emerged with a working instrument! Then my teacher asked him if he'd play a Bach concerto with him in this particular concert, so FavoriteBoy loaded the harpsichord into a friend's van and went and played the concert. He did a fantastic job.

2) After orchestra rehearsal tonight, I am going to the airport to pick up my mom!

3) Tomorrow evening at 7:30 pm is our orchestra concert, in which I am a featured soloist. Orchestra. Me. Standing alone up front. Playing a solo. And yeah, I played it on the little tour last fall, but somehow this is different. By 'different,' what I really mean is 'more scary.'

4) We have had a cellist here at school for the past month! She is a student of my teacher's wife, and has been spending her college interterm here at Gordon, playing in our orchestra. The best part is... Me on 1st violin plus Roommate on 2nd violin plus Melissa on viola plus one fabulous and agreeable cellist equals A REAL LIVE STRING QUARTET! We have been playing Mendelssohn Op. 13 and I have had a radical conversion experience from feeling ambivalent about string quartets (having hardly ever playing anything of the sort) to being wildly, exquisitely, passionately in love with string quartets. I am convinced that there can be very few things better in this life than playing string quartets, and most particularly, Mendelssohn. We performed the first movement of the Mendelssohn in musicianship on Monday, and people seemed to like it a lot... perhaps because we enjoyed it so much ourselves. After the orchestra concert tomorrow night, our cellist is leaving, and there shall be much sorrow. BUT there is a possibility that we can continue to play together - and wouldn't that be swell.

5) If anything is better than string quartets, it is FavoriteBoy. He gave me a watch for Valentine's Day. It is beautiful.
Posted by sarah marie at 6:51 AM No comments:

I am logging in from the computer lab in the music department just to inform you all that I have developed some nasty canker sores along my upper gum line. It basically feels like multiple volcanos went ahead and errupted right in my mouth. It's painful. So I figured, naturally, the best thing to do would be to whine about it. On my blog. For the world to see.

Thank you for your sympathy, world wide web.
Posted by sarah marie at 4:34 PM No comments:

I forgot to mention in my previous post that the best part of being at Congress was the 'Scavenger Hunt' Melissa and I embarked upon as soon as we were done playing. We looked at all the tables and booths and got free stuff! I am now the proud owner of 16 new pens in all colors, shapes, and sizes, four tiny teddy bears, one small day planner, a notepad with a tiny green pen, a keychain lanyard, two carribeaners, and one bottle of hand sanitizer.

Email ThisBlogThis!Share to TwitterShare to FacebookShare to Pinterest
Yesterday was an adventure. During the course of said adventure, I earned $84.00, free parking in a parking garage ($26.00), a free dinner and dessert with Melissa at The Cheesecake Factory ($41.00 combined), and all mileage expenses paid for.

First I made money teaching piano lessons in the morning. Then, I went to Vision New England's Congress at the Hynes Convention Center in Boston. Melissa and I had been asked to provide music at the Gordon College booth there. It was a "fifty bucks plus all expenses paid" type of thing. We ended up just playing through a hymnal's worth of hymns, which is easy but fun. It's nice practice for double-stops - each of us would take two parts at once when we could, so that all four parts were covered. Some hymns are easier than others to do this sort of thing, of course, and it depends largely on the key. G, D, F, B-flat, and those sorts are very nice, while A-flat and E-flat are less friendly. And G-flat is the worst, so G-flat hymns we just played in G instead!

A lot of people would stop to listen, and then ask us, "Do you know these hymns?" "Well, yes.." "I mean, are you familiar with them? The words, too? And you've heard them and sung them in churches?" "Of course!" At this, many people would be very pleasantly surprised. It's sad, really; a lot of people from my own generation are so divided from their own parents' and grandparents' generation because of differences in worship styles. Many people my parents' and grandparents' age are surprised to find that I might actually know hymns! One elderly gentleman thanked me for the music, and said it was refreshing to hear hymns when so often today he only hears "praise songs" at church. Then he quipped, "Don't get me wrong: I'm sure there are rock bands in heaven. But I'm equally sure there'll be a place for me to get away from them!"

The matter of music in worship is a complicated one, of course. The adult Sunday school class at church has been doing a five-week series on this very topic, taught by a music professor at Gordon. As church organist/pianist, FavoriteBoy has been involved in leading hymns to commence each class. He's also been featured as a panelist both last week and this morning to answer a series of questions. He's so intelligent and articulate; I was very proud of him. Everyone applauded him, too. The congregation feels blessed to have him at the church... and so they are! He's the best. He doesn't convey the faintest trace of "music snobbishness," either, which really helps in the music in worship discussion - I've discovered over the past five weeks just how touchy of an issue this can be!

The answer? Strongly, of course! He quoted how the Psalms command us to sing joyfully and loudly and skillfully to God, and reminded everyone that God knows exactly what kind of voice He gave you (regardless of what you or even your neighbor thinks of it). God doesn't offer exceptions or caveats in the Bible - so you'd better be lifting up your voice to Him!

Anyway, I enjoyed hearing FavoriteBoy in this setting - church music is one of his passions, and he's just so good at it. He'll be embarassed that I wrote this, of course - that's because he's humble, too.

Among the many issues of worship music - excellence, making value judgments, and many more - is one that was brought up in Sunday school today: The 'new' music might bring in the youth, but it also might drive out the older generations! It made me grateful for the connection I have to my grandparents through knowing hymns. It's their means of worship, and they have so many memories tied to that music. Over the summer I made my grandparents a mix CD of songs they knew and loved. It was one of the best parts of my summer, just seeing how much they seemed to love it - enough to try to learn how to operate a CD player so they could listen to it even when we grandkids weren't around to play it for them! One of the songs I put on the mix was "Precious Lord, Take My Hand." I love that hymn, and so do they. That's a connection we have. We have many others as well, of course, but knowing something of their time, their history, and their music... that's important.
Posted by sarah marie at 3:16 PM No comments: