This morning we had a dress rehearsal, after which I practiced for one single pathetic hour and then dragged myself back to my dorm room, where I proceeded to nap for about four hours. Tired? Lazy? Hard to say.

When I woke up, I walked down the street a bit and found a place to get a much-needed hair trim. Along the way, I noticed this pebble on the ground: 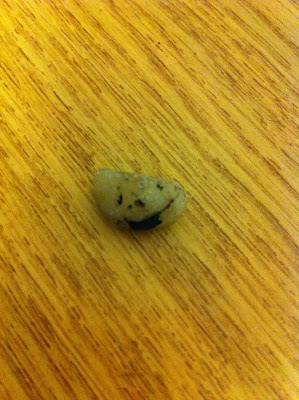 Then it was time to get ready for tonight's concert, which consisted of the three conductor-less chamber orchestras that have been rehearsing for the past week. My group played Ligeti's Romanian Concerto and Fauré's Masques et Bergamasques. The seating here is different for each concert, but my stand partner for this concert was Esther, a very nice fellow Californian! We're thinking about taking a trip into DC next weekend and seeing some of the Smithsonian together with a few other friends.

I gave my iPhone to my friend Brooke and asked her to get a picture of my chamber orchestra on stage, but apparently she was so mesmerized by our playing that she forgot. So this picture I took of a different group playing Respighi's The Birds will have to suffice - you get the idea. 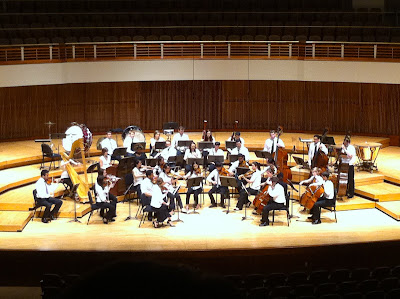 I particularly enjoyed playing the first movement of the Fauré:

And the second movement of the Ligeti (which starts at 2:50 in this video):

And I definitely love the fourth movement of the Ligeti, which I posted a recording of before.

I was a good concert - my first performance here at NOI, with several more to look forward to.