Well, I actually got here yesterday, but today was the first day of activities involving music, so I think I can consider this Day 1 of band camp.

And by band camp, I mean the National Orchestral Institute, a summer music festival held at the University of Maryland, where I am violin-ing day in and day out from now through July 2.

Yesterday was checking in, moving in, meeting people, informational meetings, and the like.

I'm staying in a single dorm room as part of a suite of three rooms (two singles and one double) that share one bathroom. When I got here I realized that I had forgotten all the particular joys of dorm life. 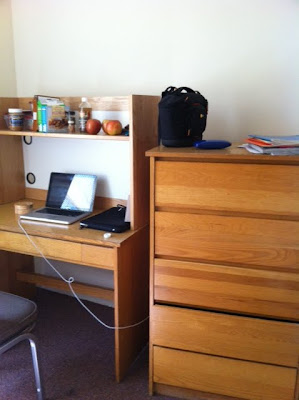 The pictures don't really do it justice, but my room is about three times as wide as this twin sized bed, and one and a half times as long. 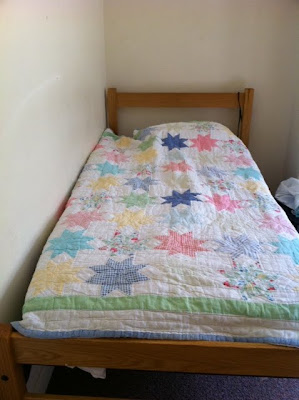 But the best part is the crinkly plastic mattress, hard as a flat sheet of concrete, with crisp white sheets provided to me by the University that must be about, oh, 4 thread count.

At least I still have my own twin quilt from my college years, and brought it with me. It's soft and speaks of home.

If I were a student at this school, I would stage a protest. It would involve every student simultaneously throwing his or her mattress out their window. Because really, this is 2011, and we can do better. Let's just say that I woke up feeling less rested than when I went to sleep last night. It may be time for an excursion to Target in search of a twin-sized mattress pad.

But despite the very uncomfortable sleeping accommodations, I have already met some lovely people and played some glorious music. And while I miss Nathan and know I will only miss him more as time goes on, I think band camp will be a good adventure.

NOI Goal #1: to leave here a better violinist than I arrived.