This was the first year I ever watched the Oscars. I know - probably weird, right? But I knew that The King's Speech was up for several Academy Awards, and I was really hoping for Colin Firth to finally win an Oscar. So I was actually pretty excited about watching the whole event. 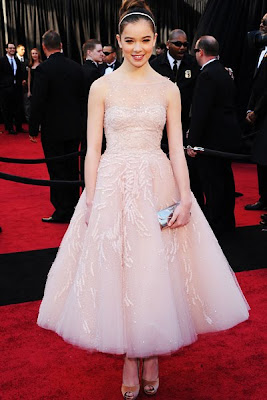 Another age-appropriate dresser? Helen Mirren. Honestly, a lot of the celebrities just didn't look their best in the dresses they were wearing. Helen looked glamorous in grey. 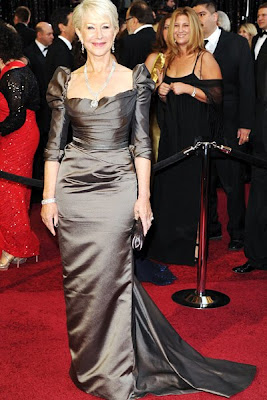 Not a fan of Melissa Leo's speech. But David Seidler's? That's what an acceptance speech ought to be.

Mila Kunis was a little awkward, but - aside from the color - I liked her dress. 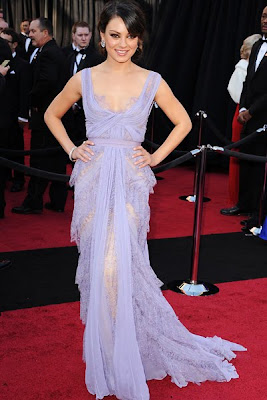 Christian Bale's beard has got to go.

Okay, a lot of women's dresses were weird. 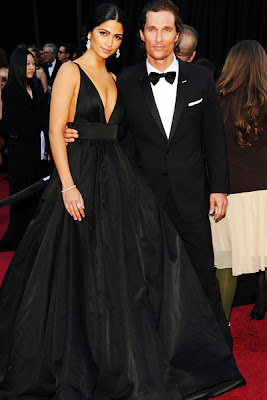 I don't know where Natalie Portman stands on political issues, but her best actress acceptance speech happened to be beautifully in support of life: she thanked her parents for giving her the gift of life, and then her fiance for her most important role yet, that of becoming a mother. I liked that.

Sandra Bullock was elegant and gracious and charming as she presented the award I cared about the most - Best Actor in a Leading Role - which, I was thrilled to see, went to Colin Firth. It was a moment I wanted very badly for him, which really was kind of weird, since I seldom get attached to celebrities. 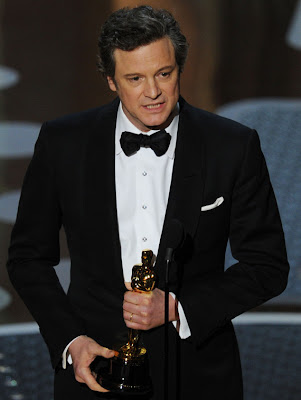 I did think Jesse Eisenberg was really good in The Social Network, and deserved recognition, but Colin Firth was nothing short of tremendous. And while I enjoyed The Social Network, I don't think it'll really be on the radar in terms of film history in even a few years, much less a few decades. The King's Speech, on the other hand, I predict will become a timeless classic. [But what do I know?]

Of course, I think Beethoven should have gotten some acknowledgement for his brilliant 7th Symphony featured in The King's Speech. But in a way he got his moment in the limelight alongside Colin, as they used the speech (and underlying symphony) from the film as the background sound throughout the clips of all ten films nominated for Best Picture. I was, of course, pulling for The King's Speech to take home this Academy Award as well - and it did!

And I really enjoyed the sight of those PS22 kids singing their hearts out on Somewhere Over The Rainbow. I mentioned them once before and continue to salute music teachers who inspire kids like that to dare to dream dreams that really can come true.

So, now I've watched the Oscars. Pop culture - who knew it could be so enjoyable?