What's in a Name: Ellen Cecilia

It probably won't come as a surprise that the topic of baby names has been on my mind lately.  And it's definitely a subject of discussion around here, what with baby number 2 due to arrive in less than three months now.

Oh, and speaking of baby names, if you haven't read the post How to Name a Baby from Wait by Why, you should.  Humorous, interesting, and with cute stick figure sketches... what more could you want?  Read it.  Really. 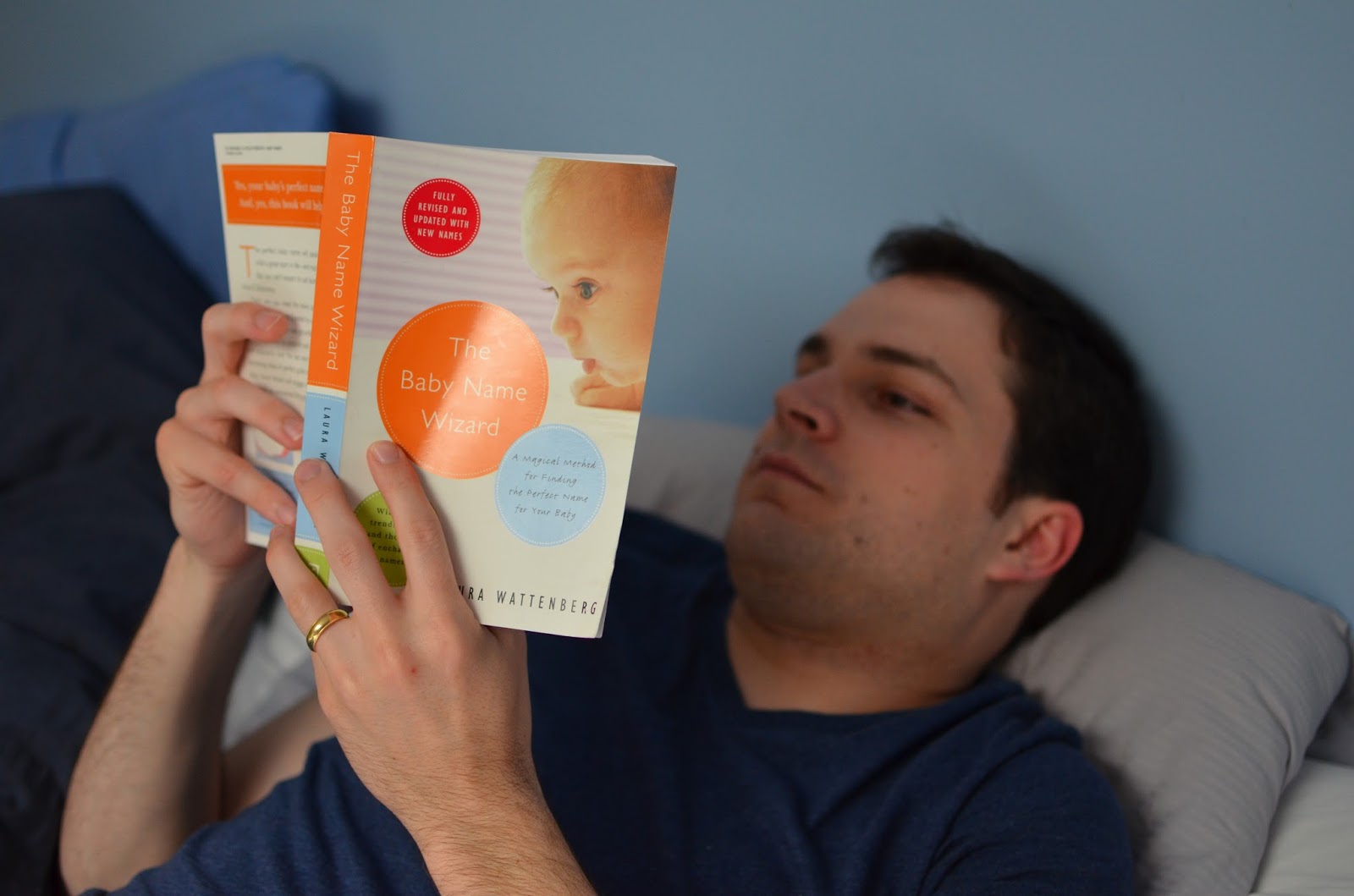 {this picture was taken while I was in labor with Nell; Nathan was doing some last-minute considerations!}
I have a few general considerations in mind when trying to choose baby names.  I find myself drawn toward names with either different number of syllables in the first and the middle names, or with the emphasis on different syllables.  Maybe this is in part because my parents chose names for myself and my siblings that follow this pattern:

I am personally somewhat less drawn to names where the first and middle names are both two syllables, and both with the emphasis on the first syllable.  I think maybe a lot of people think this way, either consciously or subconsciously.  And since probably a majority of names have emphasis on the first syllable, I think it makes sense why so many parents choose middle names like Marie or Elizabeth, names that switch up the emphasis in the overall flow of the name.

So, when Nathan and I were working on choosing names, this was a definite consideration in my mind.  And I must say, I'm rather pleased with the outcome of Ellen Cecilia!

And a third consideration for me is the popularity of a name.  I tend to want to avoid the top ten list, and in fact, the top twenty, and probably even the top 100.  In fact, when I find a name I like that barely registers on the babynamewizard.com (my favorite baby name website!) name voyager graphs in recent history, I'm pretty pleased about it.  I usually like classic names, and quite a few 'old-fashioned' or vintage names, but tend to avoid not only the currently popular names, but also any names that sound trendy or modern or androgynous.

I had heard the name Nell as a given name, and really liked it.  I remember suggesting it to Nathan early in my pregnancy.  His response was, "Nell?  That's not a name."  I pointed out that it was, indeed, a name, and looked it up on babynamewizard.com to show him some name stats.  He didn't seem to like it, though, so it fell by the wayside in our name conversations.

Months later, I mentioned a violin student of mine by the name of Nell.  Nathan commented, "Nell.  That seems like a name you would really like, babe."

He had no recollection of our previous conversation.

Together we ended up deciding that we'd use Nell as a nickname for Ellen, but curiously, we first agreed on Nell and then decided on her given name of Ellen, which means "light."

We often get asked about using Nell as a nickname for Ellen.  Apparently a lot of people assume it's a nickname because it is close to Ellen spelled backwards.  Umm, actually, that has nothing to do with it.

Nell is a medieval nickname for Ellen in the same way that Ned can be a nickname for Edward; they come from the old-fashioned endearments "Mine Ellen" or "Mine Edward," abbreviated: Mine Ellen > minellen > Nell.

As for middle names, we were still undecided about Nell's middle name when I went into labor.  We talked about it some during the labor, and in the end, we didn't settle on it until after she was born.

Nathan was suggesting Jane.  I liked Cecilia, who is the patron saint of church musicians.  It seemed fitting, given that Nathan is a church musician, and also, that my processional at our wedding had been Handel's "Ode to St. Cecilia's Day."  I actually can't remember when or how the name Cecilia occurred to me, or whether I liked the name first or thought of the patronage connection first or what.  But somehow, it became my top middle name pick.

{Despite the fact that the meaning of the name Cecilia is 'blind.'  Maybe not the nicest name meaning ever.  So we like to just think of the saint reference and kind of sweep the actual meaning under the rug in this case.}

In the end, since I had just given birth and since my friend Story was there agreeing that Cecilia was a beautiful choice, I won on the middle name front.  Actually, Nathan really likes it too.  So, we both won.

Now the question is, will we be able to come up with something we both like as much for the new little lady joining the family?  And if we're not in total agreement, whose vote should carry the most weight? I think it should be the one doing all the hard work in this whole baby-growing process, ahem, but oddly enough, Nathan thinks his opinion is equally valid.  Men... who can understand them?!