Today was one of those days where I'm looking back on several motherhood moments that aren't exactly my finest.  The day seemed aimless.  I didn't get much done.  I felt impatient and frustrated with my toddler, a.k.a. Princess Grump.

We had a snowstorm today, and spent the day indoors. 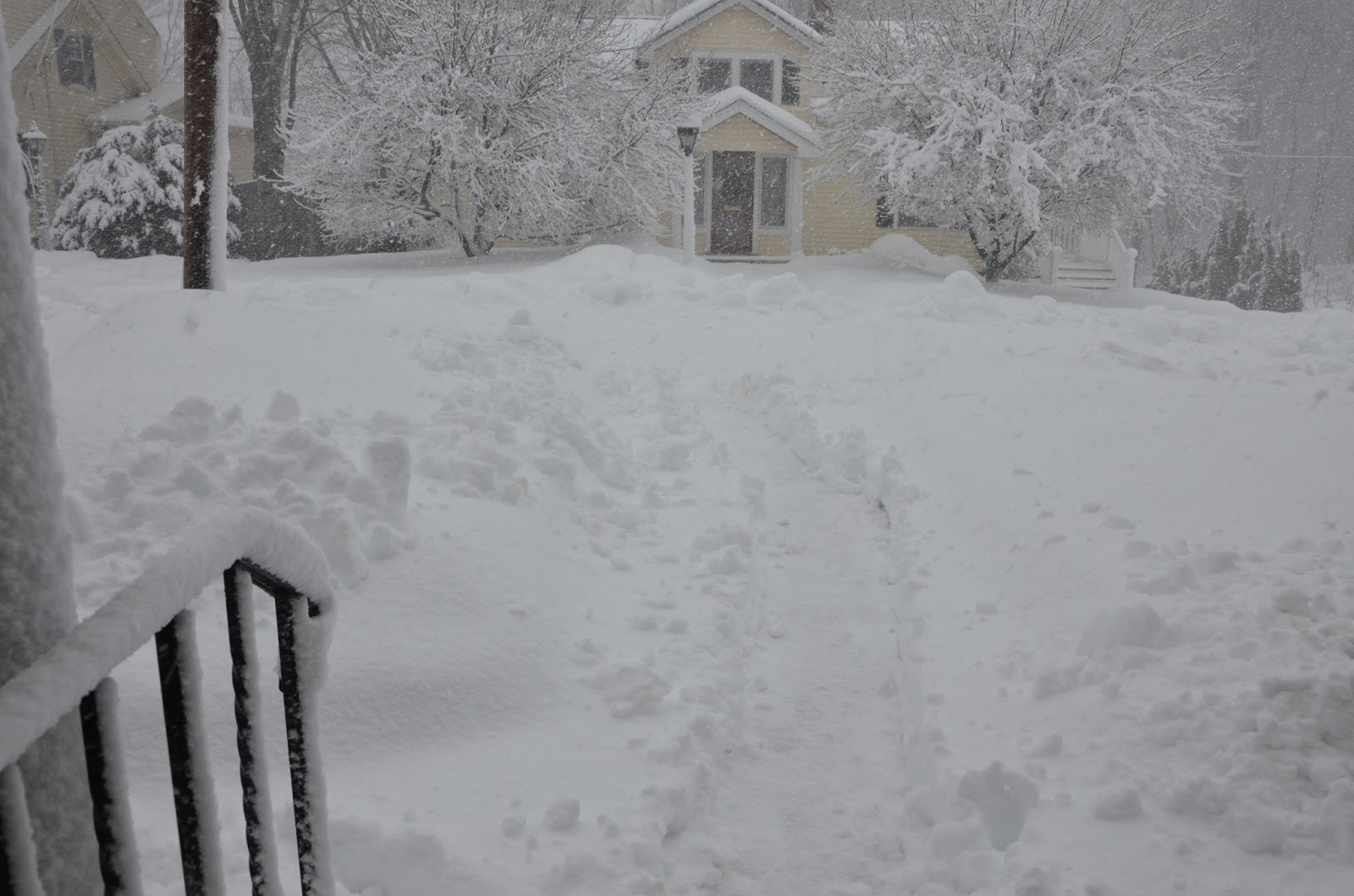 All my students ended up canceling for today, but Nathan still had to go in to work, so it was just the two of us all day, Nell with a bit of a runny nose and me hobbling around thanks to a lovely little condition I have in which basically, pregnancy makes your ligaments stop holding your joints together properly and IT HURTS A LOT.  And you don't even get a reprieve at night, because it actually defies all logic and hurts even more when you're trying to lie still and get some sleep.  But far be it from me to complain; I did, after all, get in a whole four or five weeks of feeling good between the hyperemesis and then this setting in.

Nell woke up from her nap this afternoon in a royal funk, and weirdly refused to be picked up, didn't want to be snuggled, didn't want me near her, but wailed louder than ever when I offered her some time to herself and started to leave the room.  Toddlers!  They can be among the world's greatest mysteries.  She refused her lunch in a state of near hysteria, and only finally settled down when offered a rare afternoon nursing session.  After that, the same lunch that was previously inconceivably offensive was gobbled down with tacit approval, and followed up with a whole grapefruit, one of her latest loves. 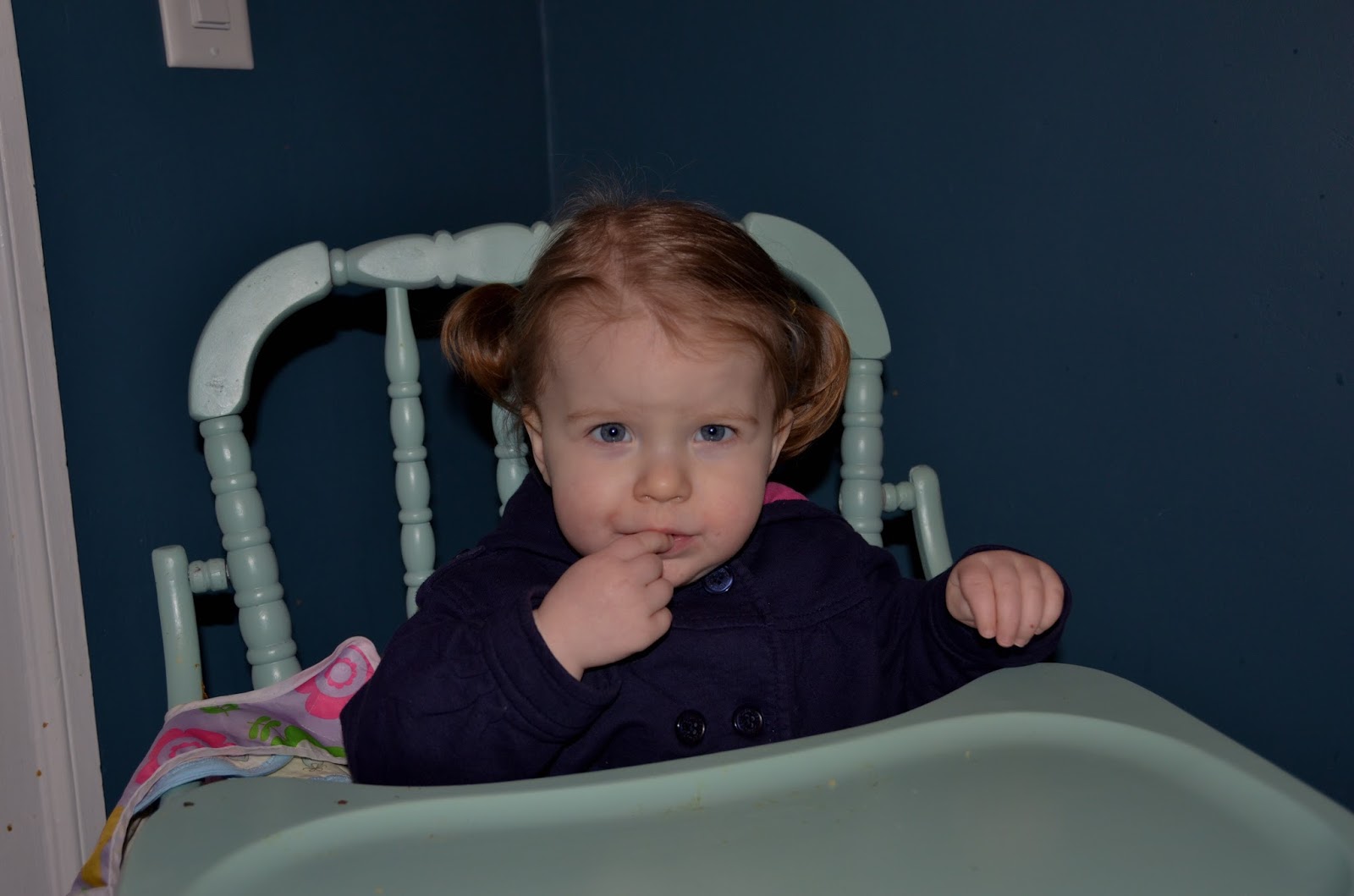 {"Fine.  That meal was acceptable after all, Mom.  But merely acceptable."}
Her satisfaction was short-lived.  I even resorted to putting on a ridiculous toddler show on Netflix late in the afternoon -- something I haven't done except when the days of hyperemesis were leaving me practically incapacitated -- to pass the final minutes until Nathan got home.  I did this partly because Nell was just fussing constantly, and partly because I needed to lie down because I felt like I couldn't breathe very well.  Great!  Oxygen deprivation has set in already and I still have ten more weeks to go.

We had grilled cheese sandwiches and tomato soup for dinner, and I managed to touch the outer edge of my thumb against the frying pan for the split-est of seconds, which somehow was enough to raise a white blister and cause a lot of pain.

Did you know that some people claim aluminum foil can help heal a burn?  No joke.  My burn was feeling OK only so long as I was running it under cold water or holding ice in a towel on it, and an hour and a half later, still in pain, I found myself turning to Earth Clinic - a site I love - for advice on treating burns.  The aluminum foil trick seemed too bizarre NOT to try, so try it I did.  And within five minutes that darn burn was feeling significantly better.  Within ten minutes it didn't hurt.  In twenty minutes Nathan found me and asked if I was protecting my thumb from aliens, and I took off the foil.  The pain hasn't come back!  Placebo effect?  Or can this possibly be real?
Nell got super cute and sweet after dinner, which she likes to do so that her Daddy will be charmed and wonder what her Mama could ever find remotely difficult about such a sweet little cherub.
Really, though, it's so nice that even runny-nosed-cranky-pants days can end with snuggles and happy bedtimes.  It may take her a while to fall asleep sometimes, but who can complain about a happy girl that likes to snuggle and oh-so-cutely insists on Mama or Daddy lying beside her and singing a bit at bedtime?
{And usually just when I think she's drifted off to sleep, she turns toward me and declares, "LA!", which means, "Excuse me Mama, I didn't give you permission to stop singing."}