I'm doing 7 Quick Takes and linking up with Jen at Conversion Diary for, oh, maybe the second time ever.  Because let's face it, this blog is a little lacking in content lately.  I really want to be blogging more regularly -- to remember the little things, the moments, the thoughts, the daily life stuff.
Not to mention the fact that all of you readers are hanging on my every word, of course.
- one -
Considering that I work part time, and am only teaching two to three days a week during these summer months, it's astounding how little I seem to be able to get done.  The kitchen it always messy, the floors always need to be mopped (my crawling baby girl's dirty knees attest to this fact), and I'm at least three loads behind on the laundry on a regular basis.

- two -
Nell looks so much older to me recently.  She's not walking yet but aside from that rather integral part of toddlerhood, she seems more like a toddler than a baby now. 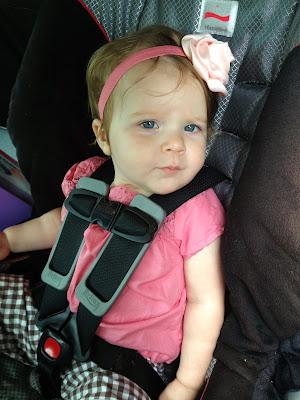 She's gone from smiling at everyone to scowling with a bit of reserve.  She's got opinions about everything, and while she may not have the words for them yet, she expresses them nonetheless. 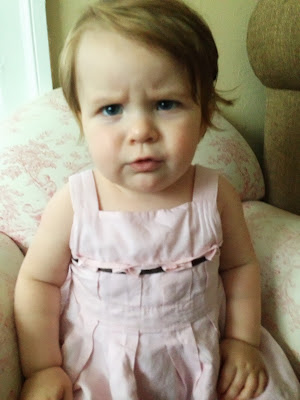 She can still light up a room with her smile though, and she gives open-mouthed slobbery kisses that would just about stop your heart. 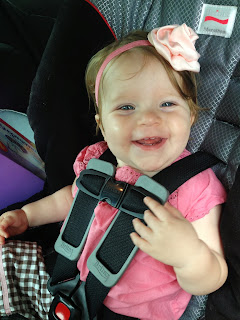 Still, feeling oddly pleased about it, despite the fact that that's less than I usually make in 30 minutes.  I've listed some more things for sale, and am also busily cleaning and organizing spare rooms, closets, and our basement in the hopes of having a yard sale before the summer is over.  Our very own yard sale!  I've never had one before, but I am a serious and hard core attender of others' yard sales every Saturday in the summer months.  So, I figure that my love of yard sales combined with our over abundance of stuff (much of which was left in our basement by the previous homeowners, actually) means we really ought to have a yard sale.  Any advice for a first-timer?

- four -
A friend linked to this on facebook and I found it a really thought-provoking read: Rethinking Service by the Revd. Dr. Samuel Wells.

- five -
I've been devouring blogs and articles and websites about parenting recently.  I stay up too late reading about discipline, teaching, positive parenting, natural consequences, etc. etc.  Sometimes I just come across the best suggestions... I almost feel like I need to memorize the scenarios and scripts of suggestions for handling situations so that I can remember it all in a few years when I'll no doubt need it.  It's a good thing life comes one day at a time, you know?  Because thinking about tantrums and disobedience and such things is pretty overwhelming, and just getting Nell to sleep at night feels like all I can really deal with for now.

- six -
Speaking of sleep.  Nell's sleeping has been nothing short of weird lately.  For one thing, there was the night we thought she might be having night terrors.  But even on the 'normal' nights, she crawls in her sleep, sleeps fitfully, cries without seeming to really wake up, oh, and sometimes refuses to fall asleep until 10:30 pm.
The different phases come and go so quickly, and just when we've settled into a routine the kiddo goes and changes it.  I remember when a swaddle and a pacifier did the trick, and we could leave that little bundle lying in her co-sleeper and she'd fall asleep.  BY. HERSELF.  Then she outgrew the swaddle, and nursing her to sleep became my new go-to trick.  But now she doesn't usually fall asleep while nursing anymore; instead after nursing she wants to crawl and climb all over me, flail and fling herself around if anyone attempts restraint (i.e. holding her), and grab at my face and laugh.
Currently we're thinking she just can't fall asleep easily for the night with it still so light out during these summer days.  In general we're all well and happy, but sometimes I stress myself out wondering how we'll handle the next change, and the next one after that.
- seven -
A couple of week ago Nathan had what I suppose anyone would consider a Terrible, Horrible, No-Good, Very Bad Day.  He subsequently mentioned that there was too much healthy food in the house and not enough junk food for him to eat.  Later that day I was doing the grocery shopping, and there was a deal at Stop & Shop that made Breyer's ice cream work out to only $1.80 / carton -- but only if you bought ten of them.  So, naturally, I did.  And we've been working our way through flavors like Thin Mint, strawberry, coffee, Snickers, and other deliciousness.  Not so good for the waistline, perhaps, but surprisingly effective at lifting the spirits.