On Saturday, we used a livingsocial deal I had purchased to have some family pictures taken.

We loved our photographer, Esther!

We'll have to wait a a couple of weeks to see all the photos, but she's already posted two of the pictures from the shoot: 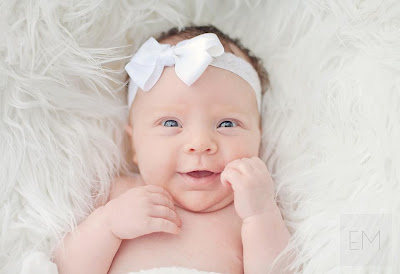 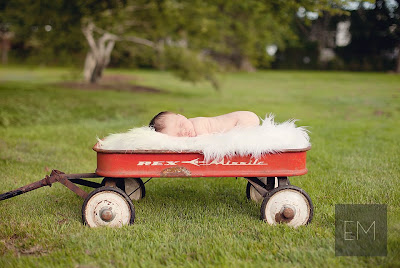 I'm looking forward to seeing the rest of the shots she got!

At four weeks old, Nell's accomplishments now include:
{shamelessly taking a page from Ahn's book here}
~ mastery of long division, and memorization of Pi to 50 digits ~
~ has completed her application to Harvard Law School ~
~ latest novel will be appearing on New York Times bestseller list ~
Just kidding.  What she has actually accomplished is so much better:
~ legs are so strong she can "stand" on my lap for several seconds at a time ~
~ sleeps with arms thrown up above her head now, instead of curled up ~
~ smiles are more and more interactive ~
~ possesses an expanding repertoire of sounds other than crying ~
~ loves to look at lights and out windows ~
~ is the noisiest sleeper imaginable: snorts, grunts, wheezes, squeaks, sighs, hiccups, her 'dolphin laugh,' and a myriad of other strange sounds ~
And possibly her greatest accomplishment of the week?
She has a bellybutton now! 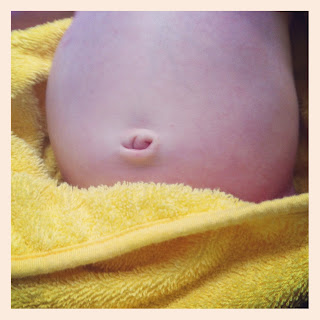 Yep.  She lost her cord stump last Wednesday night.  We are saving it while we decide which museum is most worthy of receiving it as a donation.
likes: being held, eating, sleeping, baths, hanging out in the Moby wrap, going for walks, listening to music, having her feet held together or squeezed. 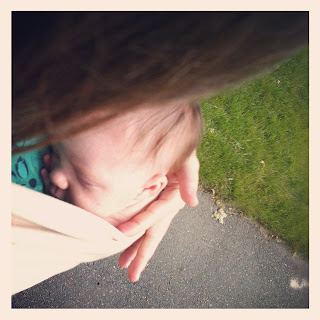 {four of her favorite things combined: being held by Mom, in the Moby wrap, on a walk, while sleeping.}
dislikes: being set down, having her diaper changed, getting dressed and undressed.
In other news: gone are the days when she would sleep for five or six hours in a stretch at night.  Now I'm usually up with her every three hours.
That's okay.  We still love her.
The many faces of Nell:
{she loves her soft duck blanket from Brooke!} 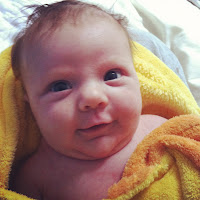 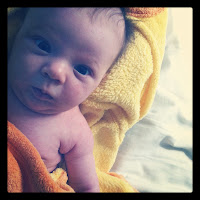 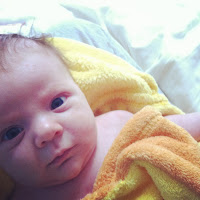 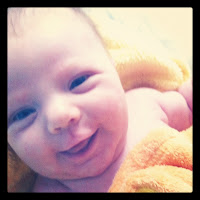 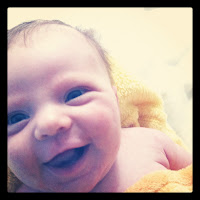 Aww.  Look at that face.  Is it any wonder we can't stop exclaiming about how cute she is?
About a dozen times a day, Nathan and I say to one another, "Oh, look at her!  Just look at her!"
And sometimes, as he gazes at her, Nathan says tenderly, "She's so lovely."
{But I bet he'll deny it if you ask him.}

Email ThisBlogThis!Share to TwitterShare to FacebookShare to Pinterest
Labels: Nell