I can't believe this baby is already three weeks old!  I think the time seems to fly by more quickly with two than it did when Nell was a newborn.  To be honest, sometimes I miss the way it was with just one baby, when I could rest in bed or sit on the couch and snuggle and baby-gaze all day long.  But then I see Nell interacting with Ree -- squealing with delight upon seeing her again each day, and kissing her happily -- and I remember that I'm enjoying the wonderfulness of having two girls, too.

Things feel as though they're settling into a new sort of normal around here (by which I mostly mean that Nell is adjusting a little more each day and returning to her ability to play independently and remain cheerful for some portion of the day), and I like to think that means I'll be afforded a little more time for writing.  Oh, and maybe cleaning my house.  Or cooking real meals again.  Maybe.

Here's a photo review of Marie's first week of life.  Mainly of interest to grandparents and people curiously fascinated by poorly-lit photos, I suspect.

{Previously: Nell's first week in review.  We think Ree looks so much like Nell did.}

This was my first and only week of having two under two, since Nell turned two six days after Ree was born!

(May 10th, a.k.a. the most restful day of my new life as mother of two... I spent the day in the hospital snuggling our new baby and having meals brought to me!  This was also the day Nell got to come meet her new little sister.) 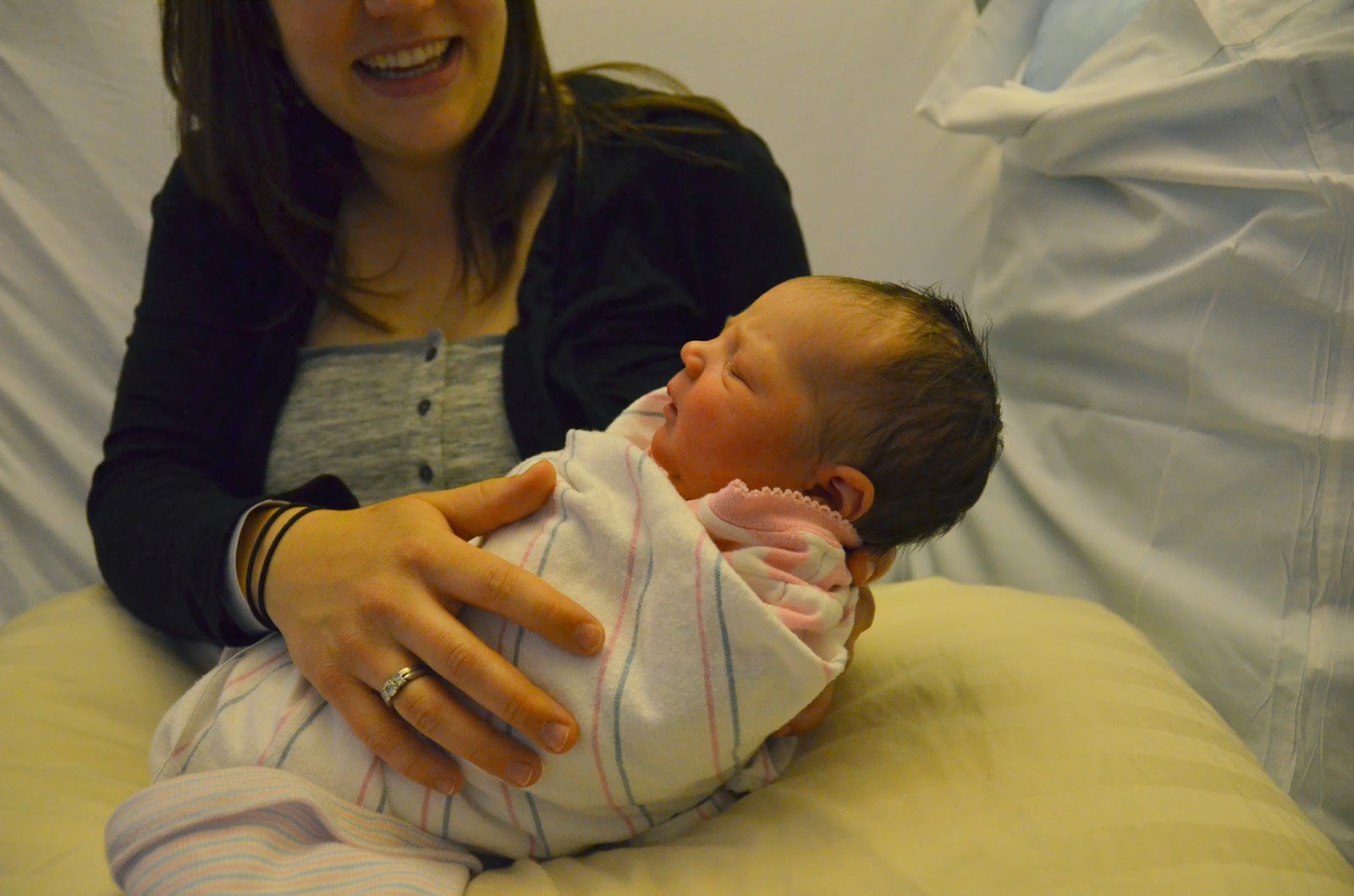 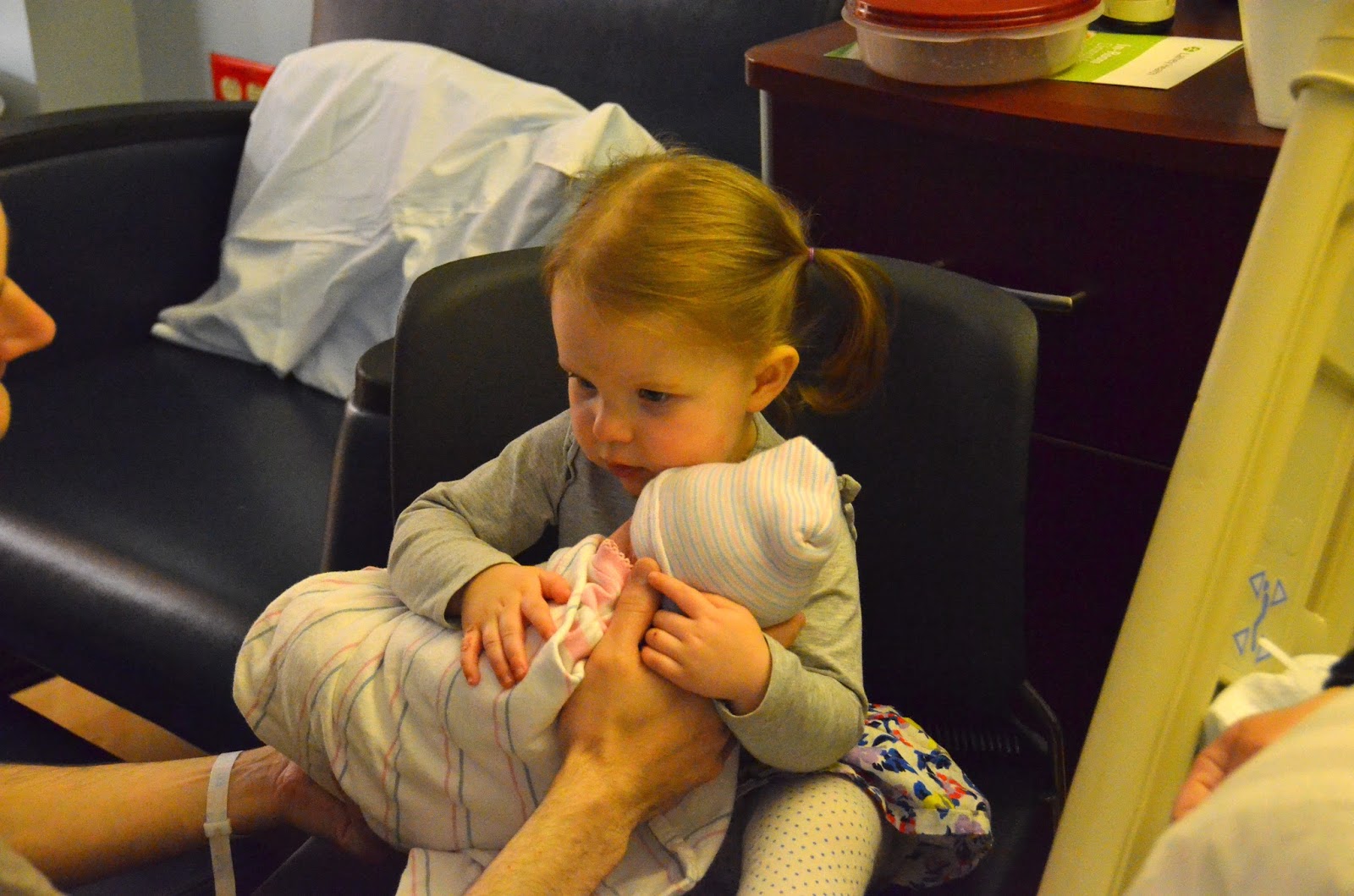 two days old:
(May 11th, a.k.a. the second most restful day of my life as a mother of two.  I spent the morning in the hospital, snuggling with Ree, had meals brought to me, and then that afternoon when Nathan got home from his church job, we all headed home from the hospital as a family of four.  Then I got more snuggle time at home while Nathan and Nell drove to the airport to pick up my Mom.) 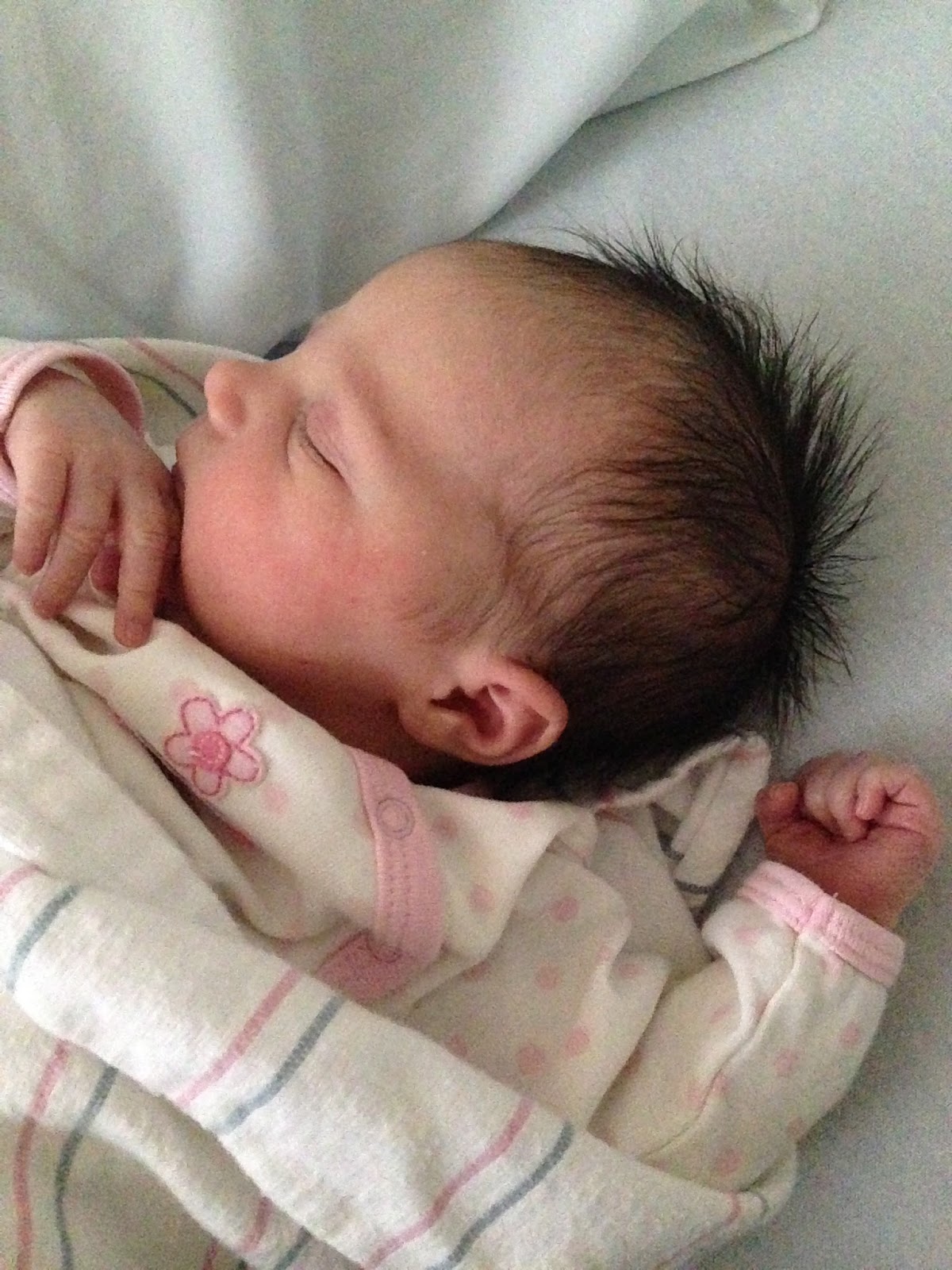 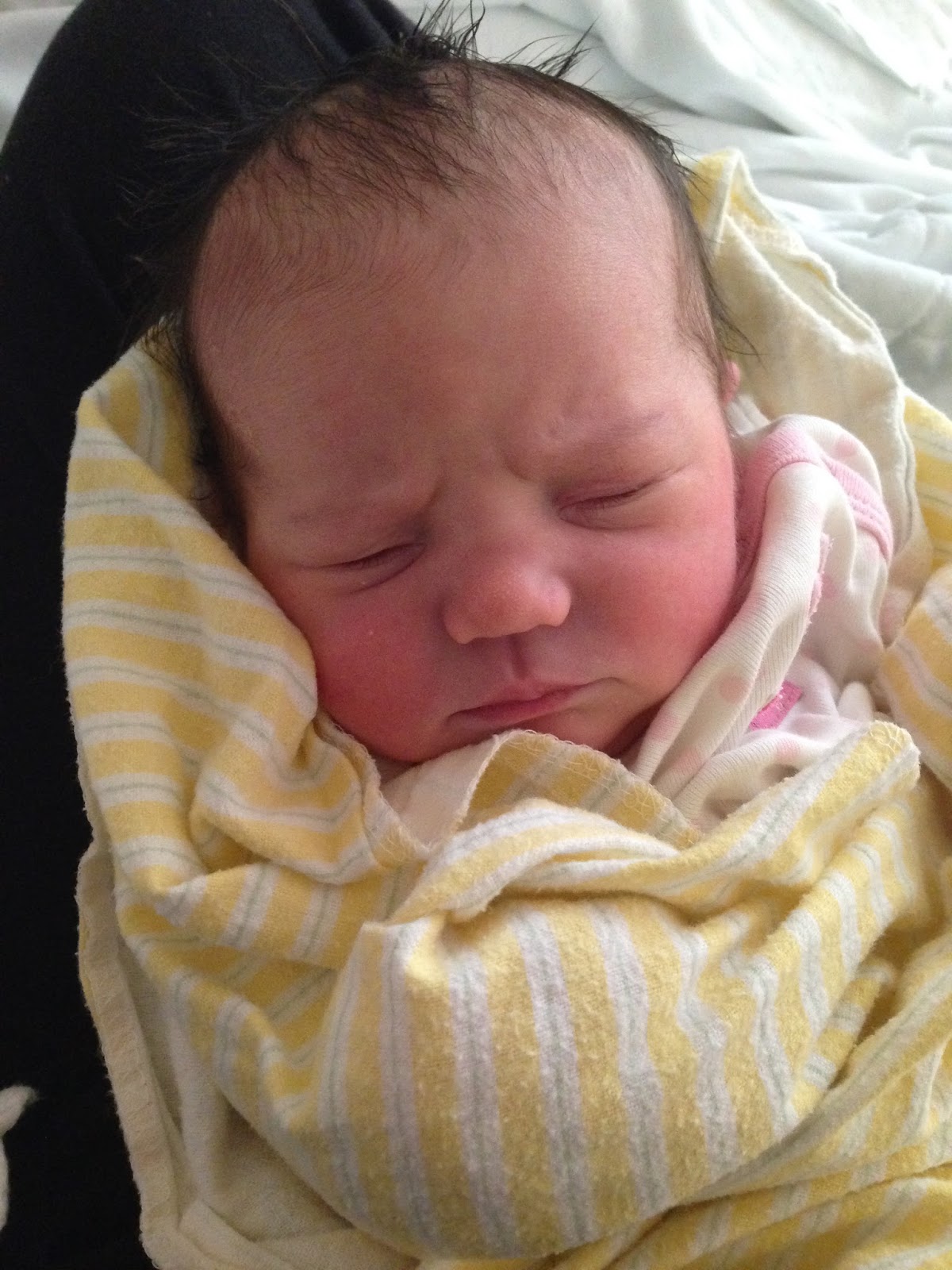 Heading home.  Someone was not impressed with the procedure. 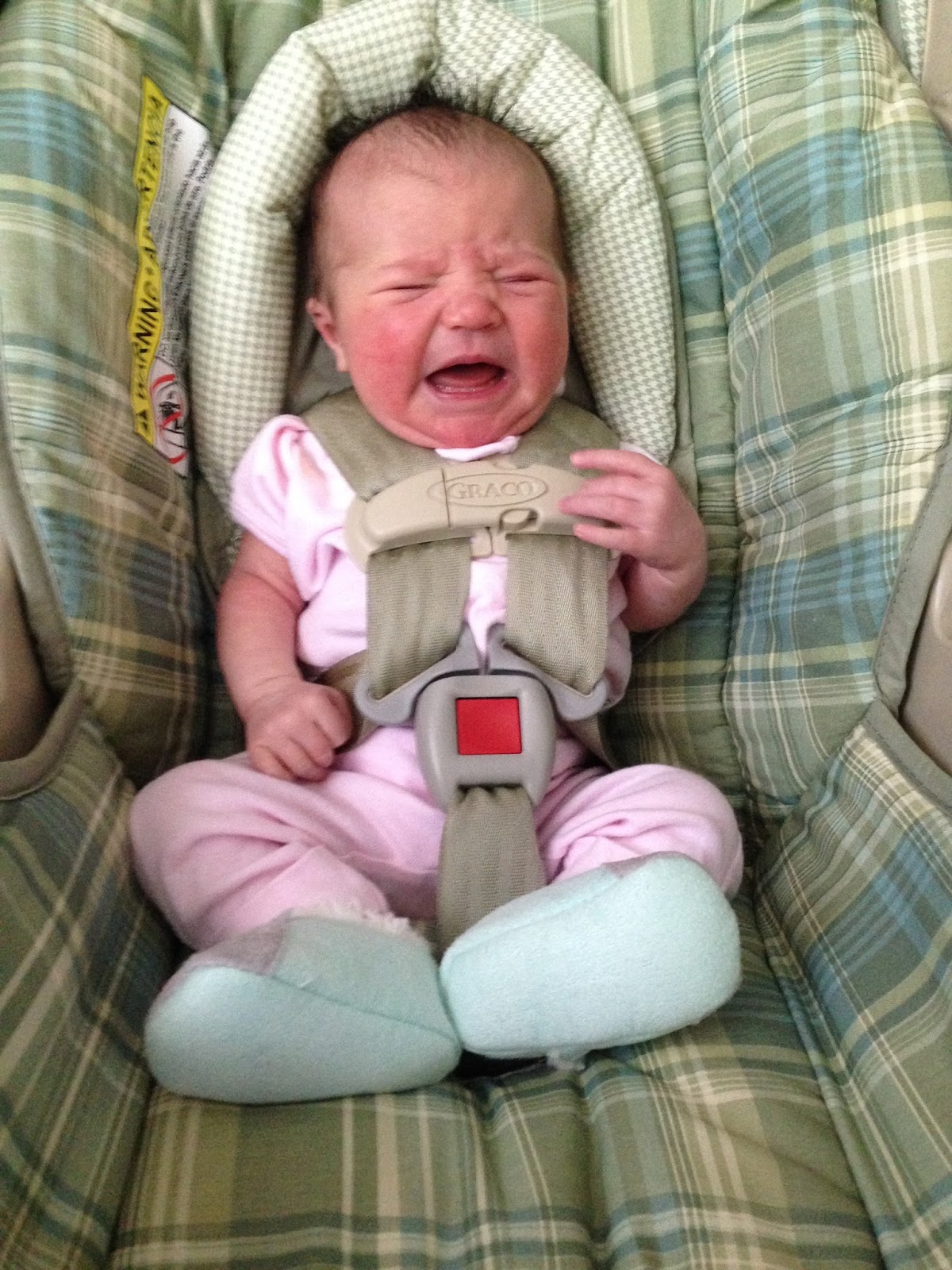 Nell was so excited to wake up and come downstairs and see "Baby Wee"!  I snapped this photo just after Ree yawned, and Nell was excitedly exclaiming to me about how she had seen Ree's tongue. 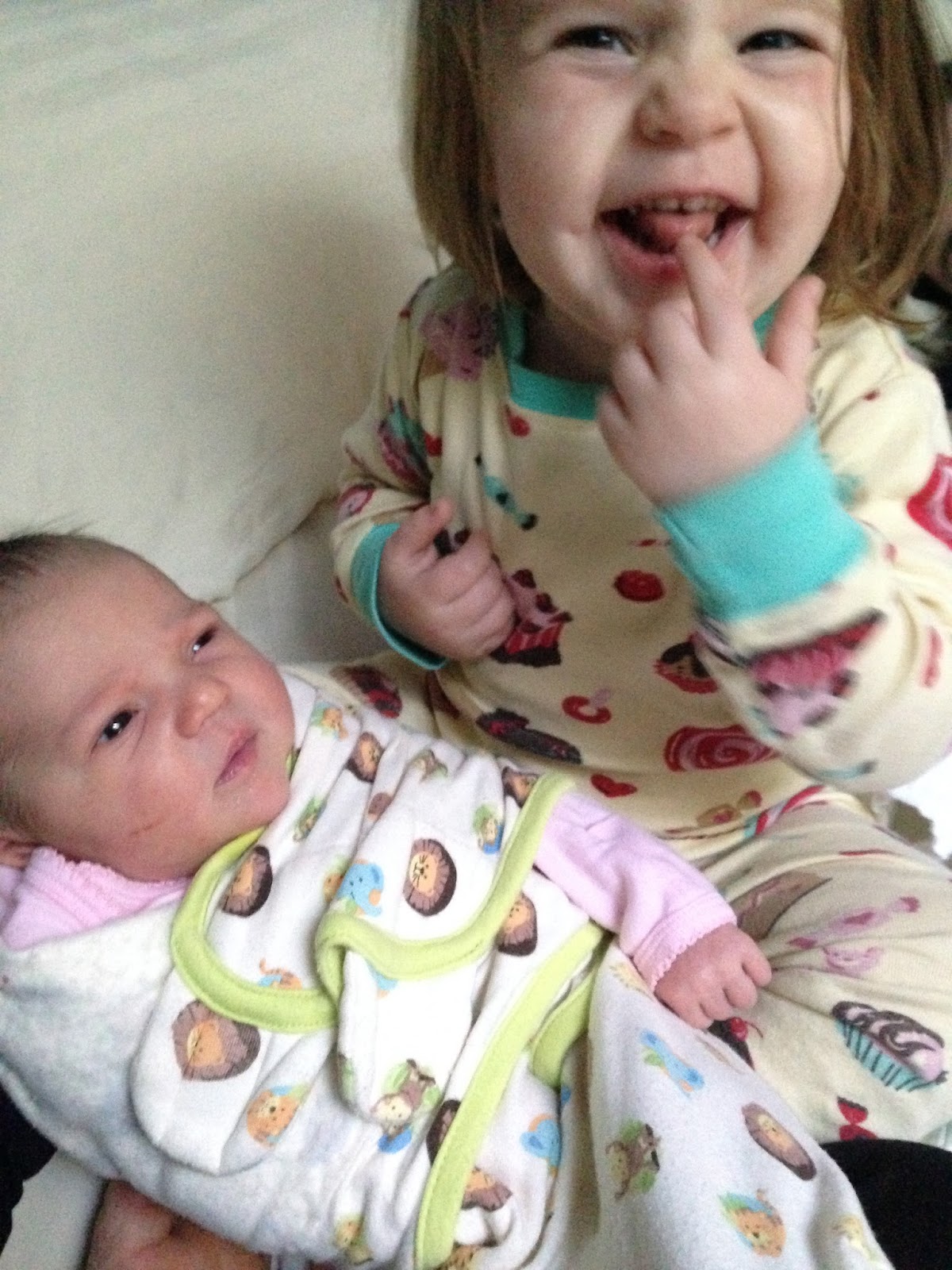 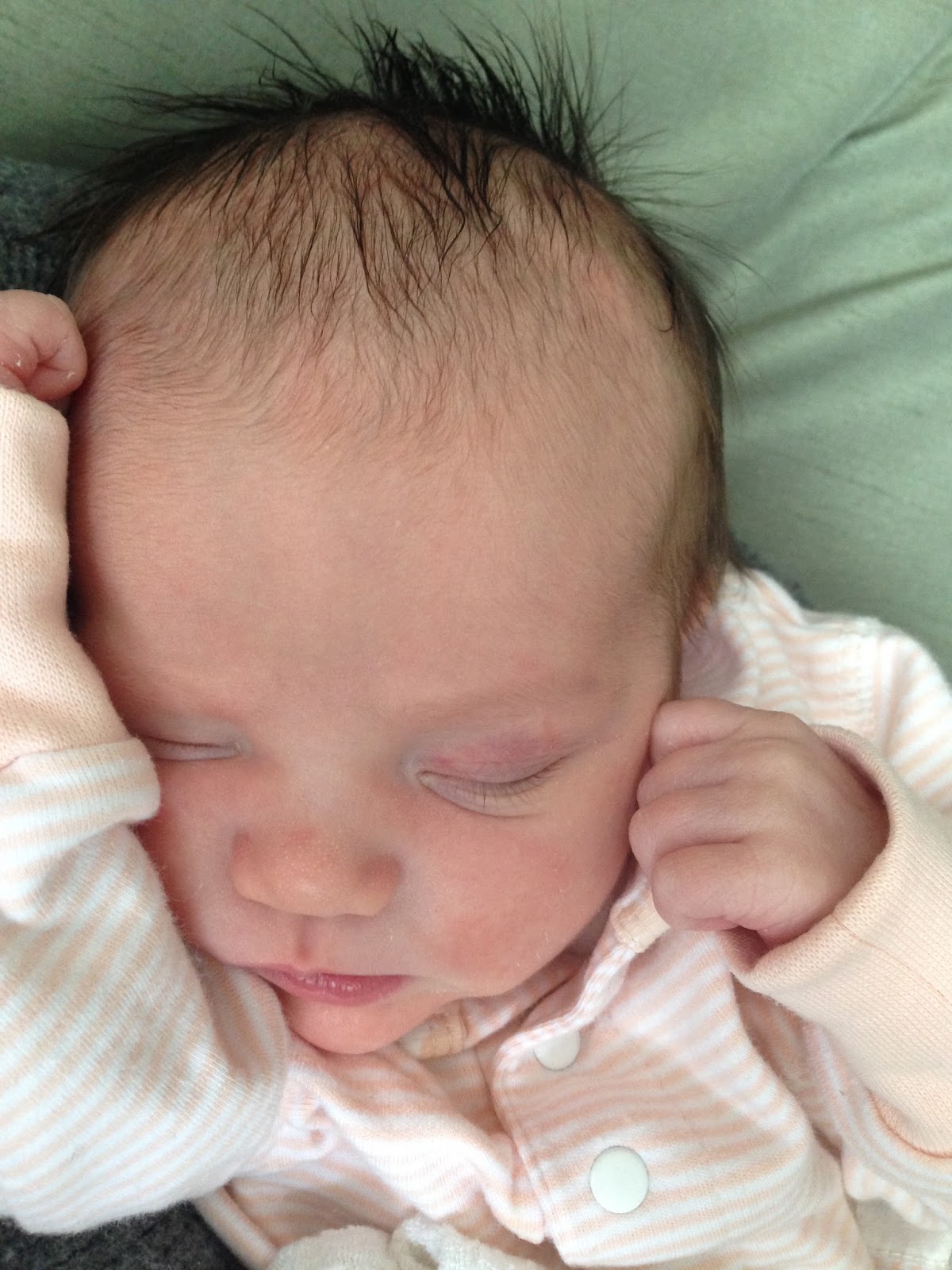 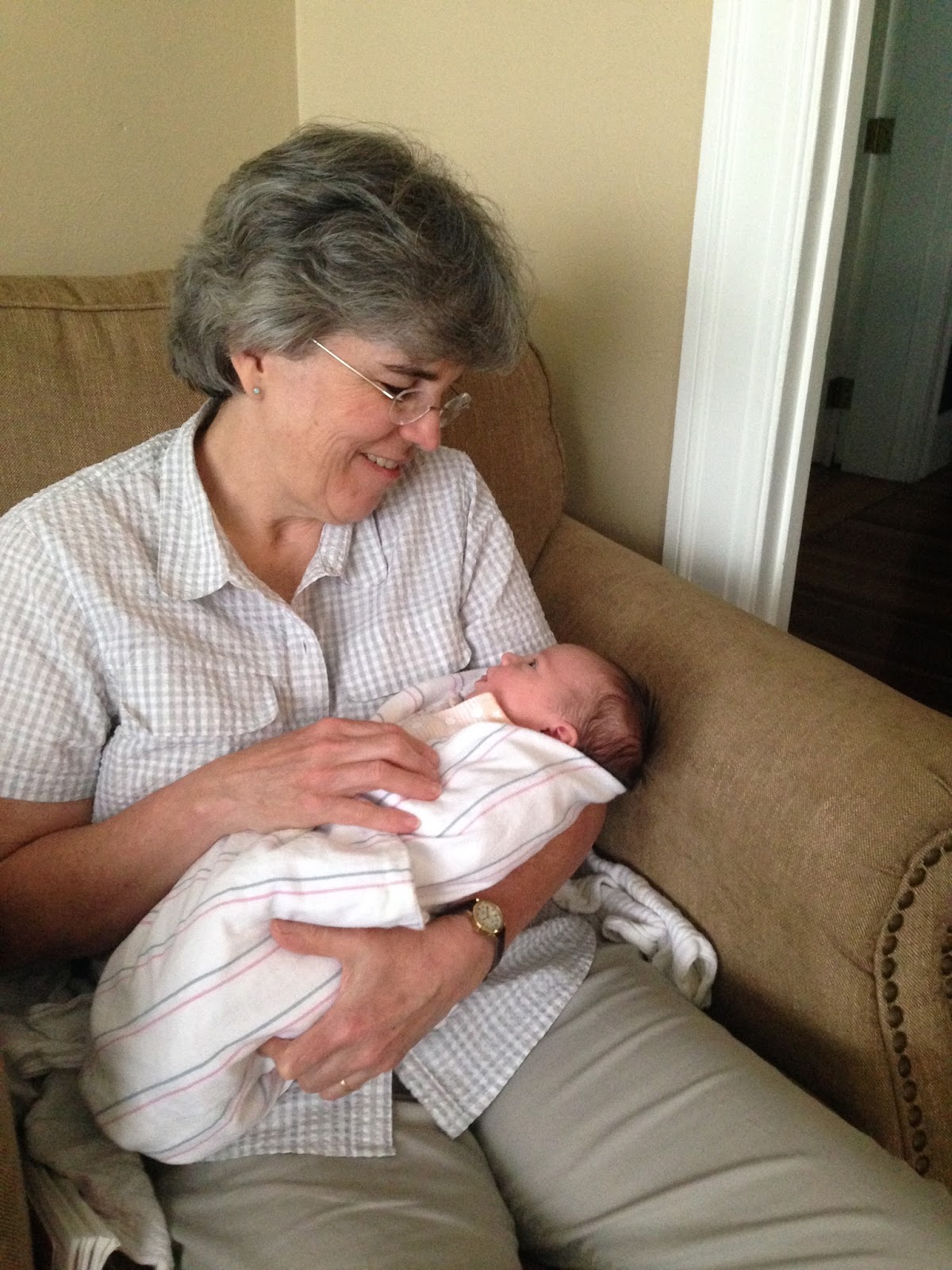 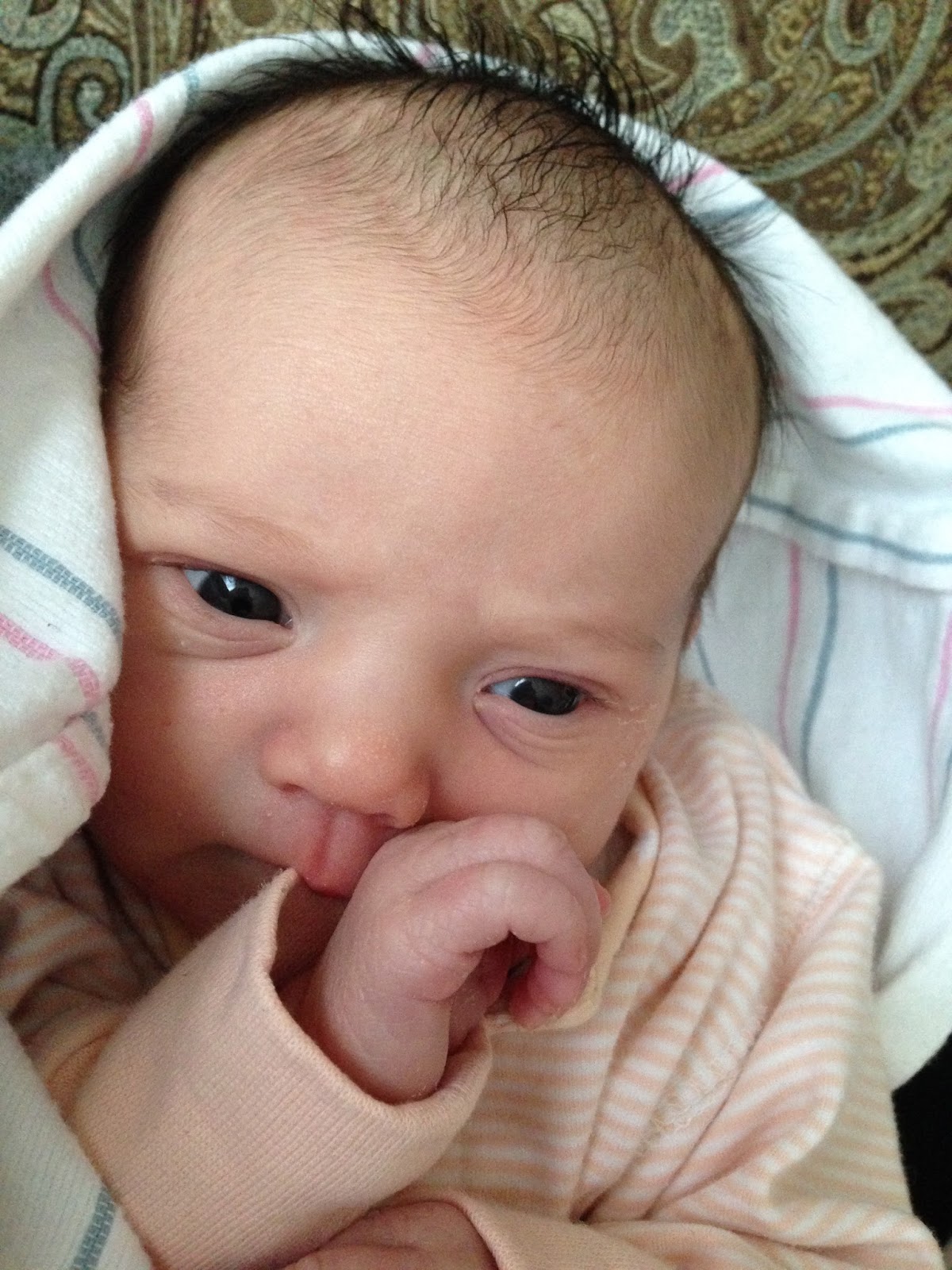 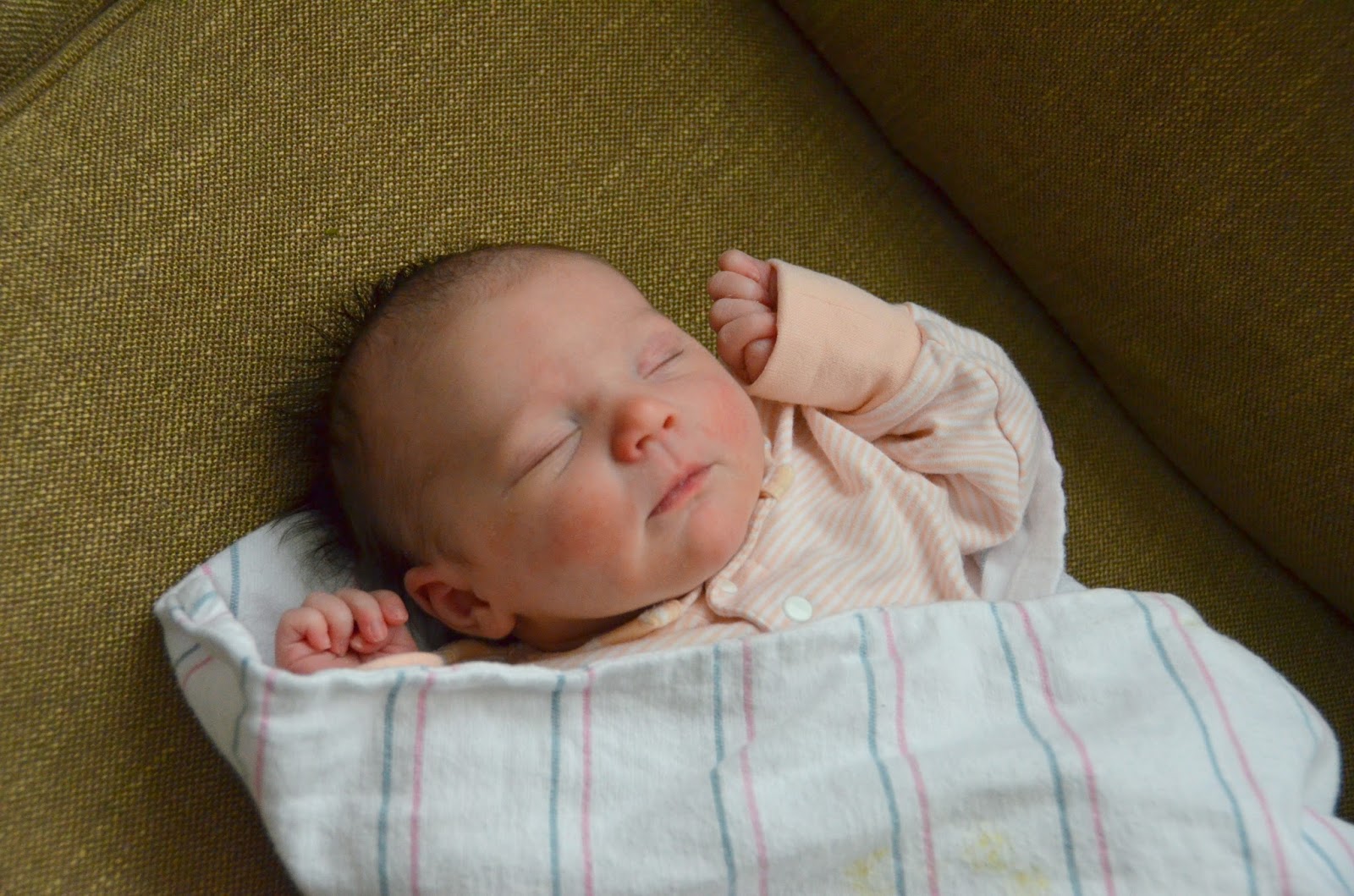 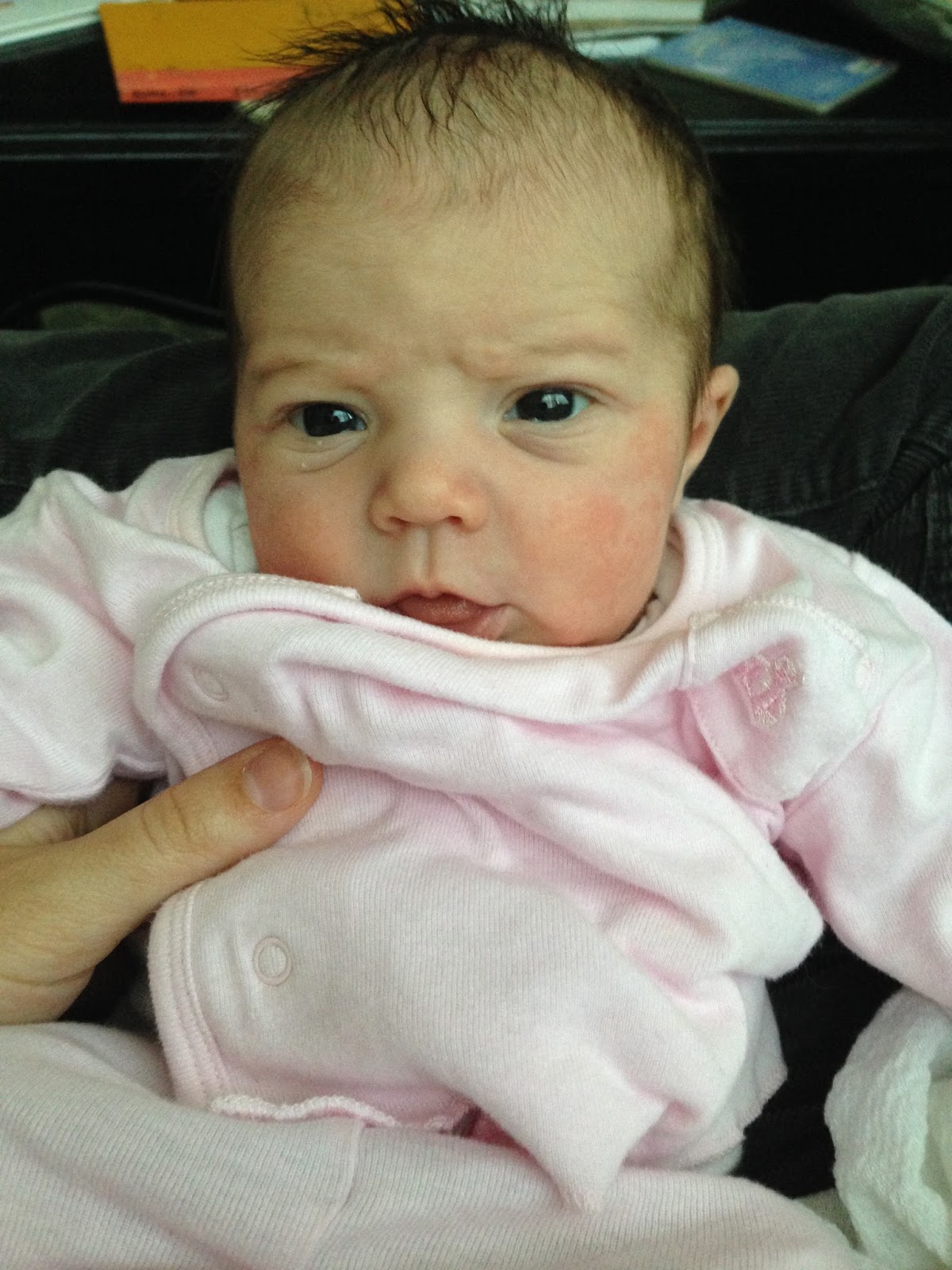 Ree may not be sure how she feels about all the attention, but Nell has sure been loving and sweet to Ree since day 1.  She wants to kiss her all. the. time.  And has only hit her in the head with a playdough container once. 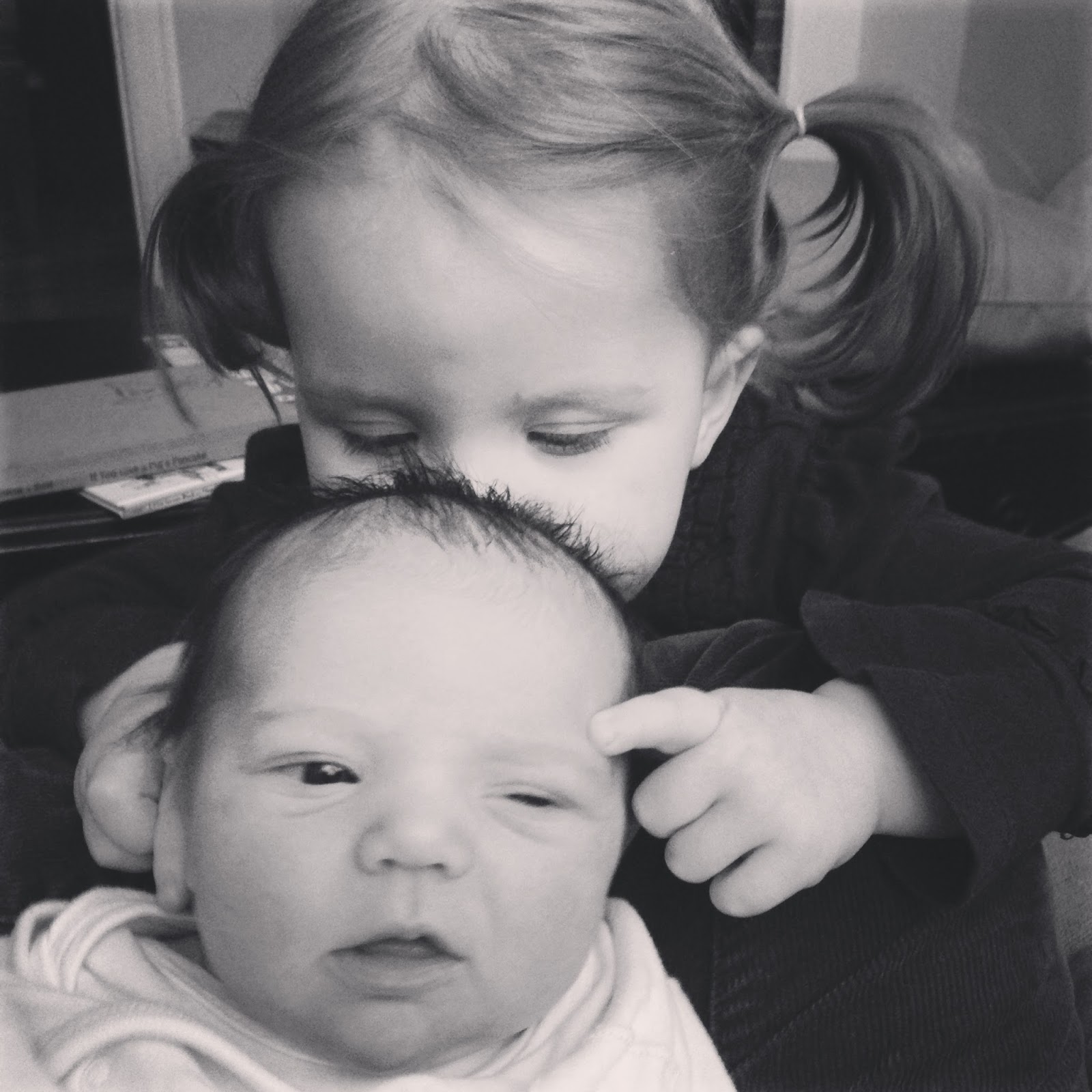 At six days old, Ree had a dr. appointment for a weight check.  She weighed in at just over 8 pounds.  But she thinks such details are boring. 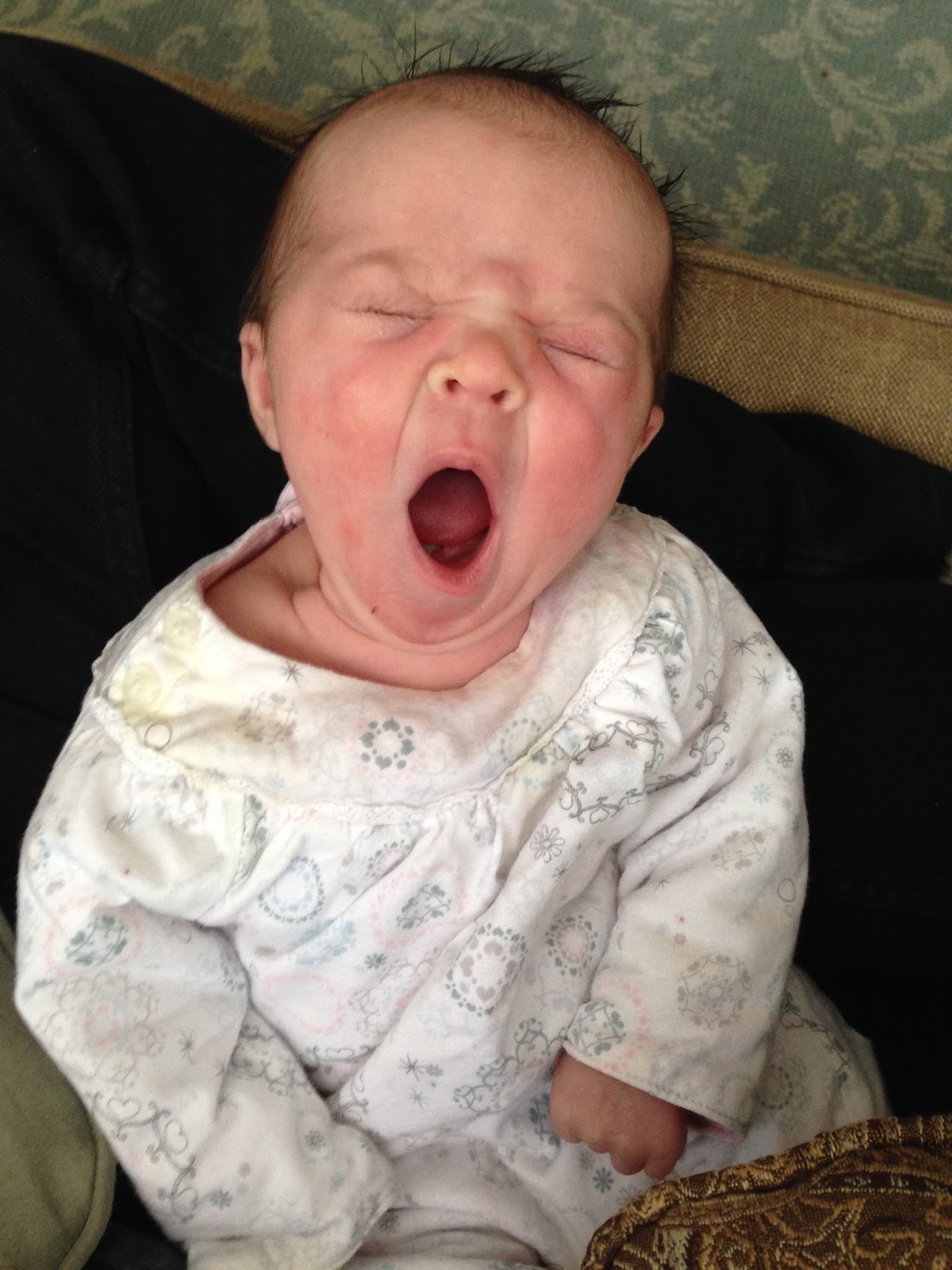 She also had her first bath! 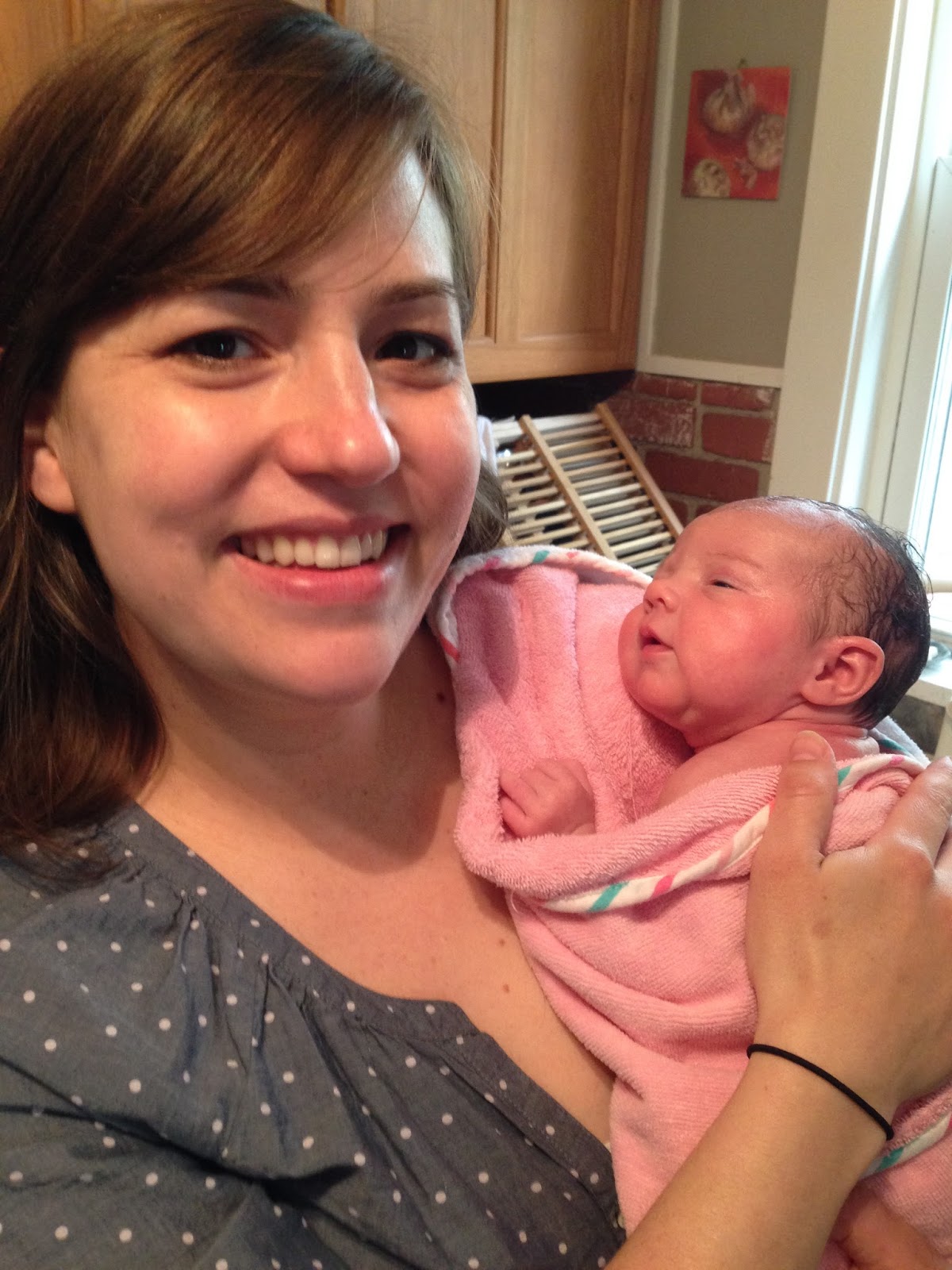 And she received a bouquet of flowers, compliments of some Trader Joe's employees. 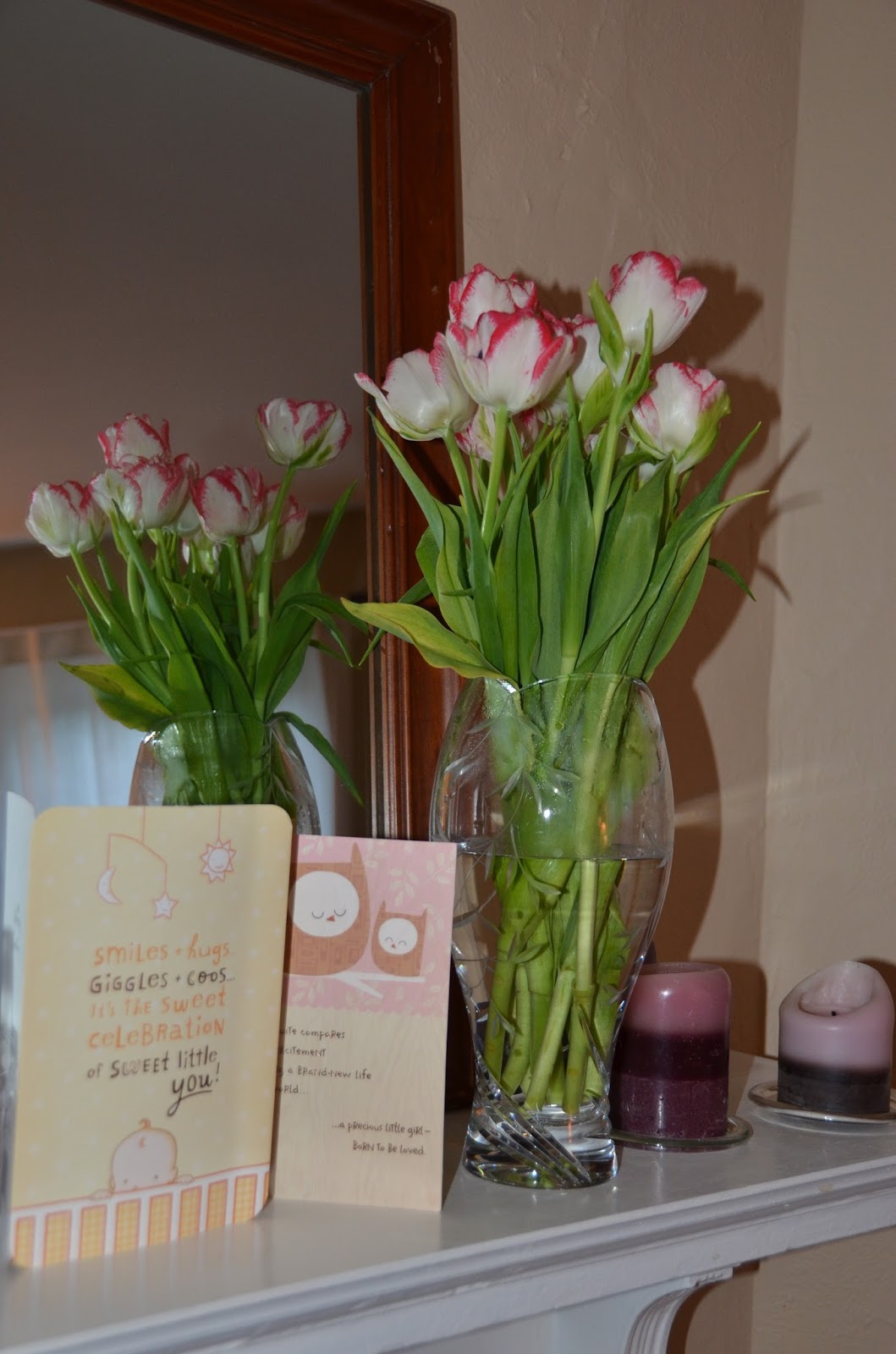 An exhausting day for a newborn. 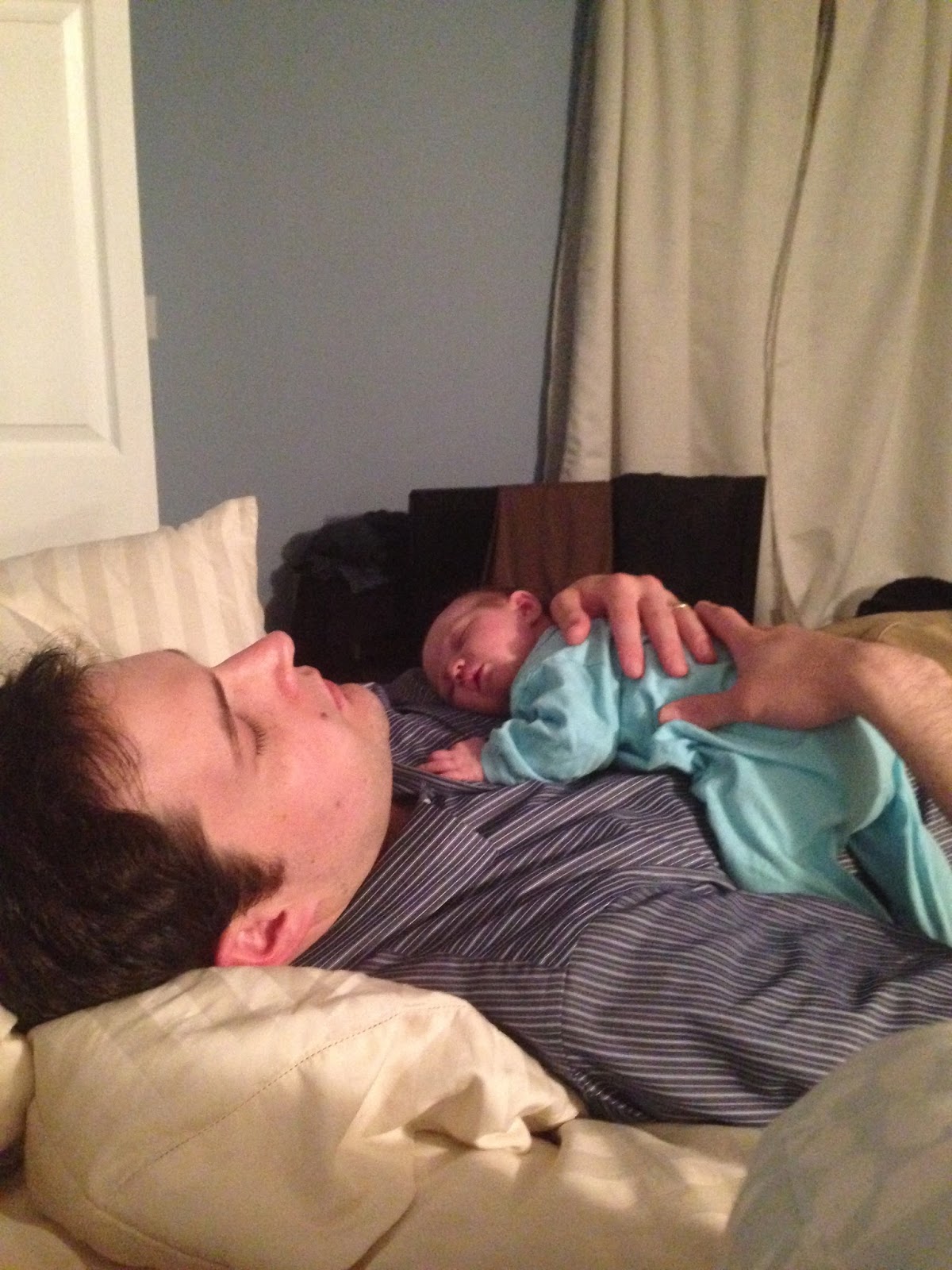 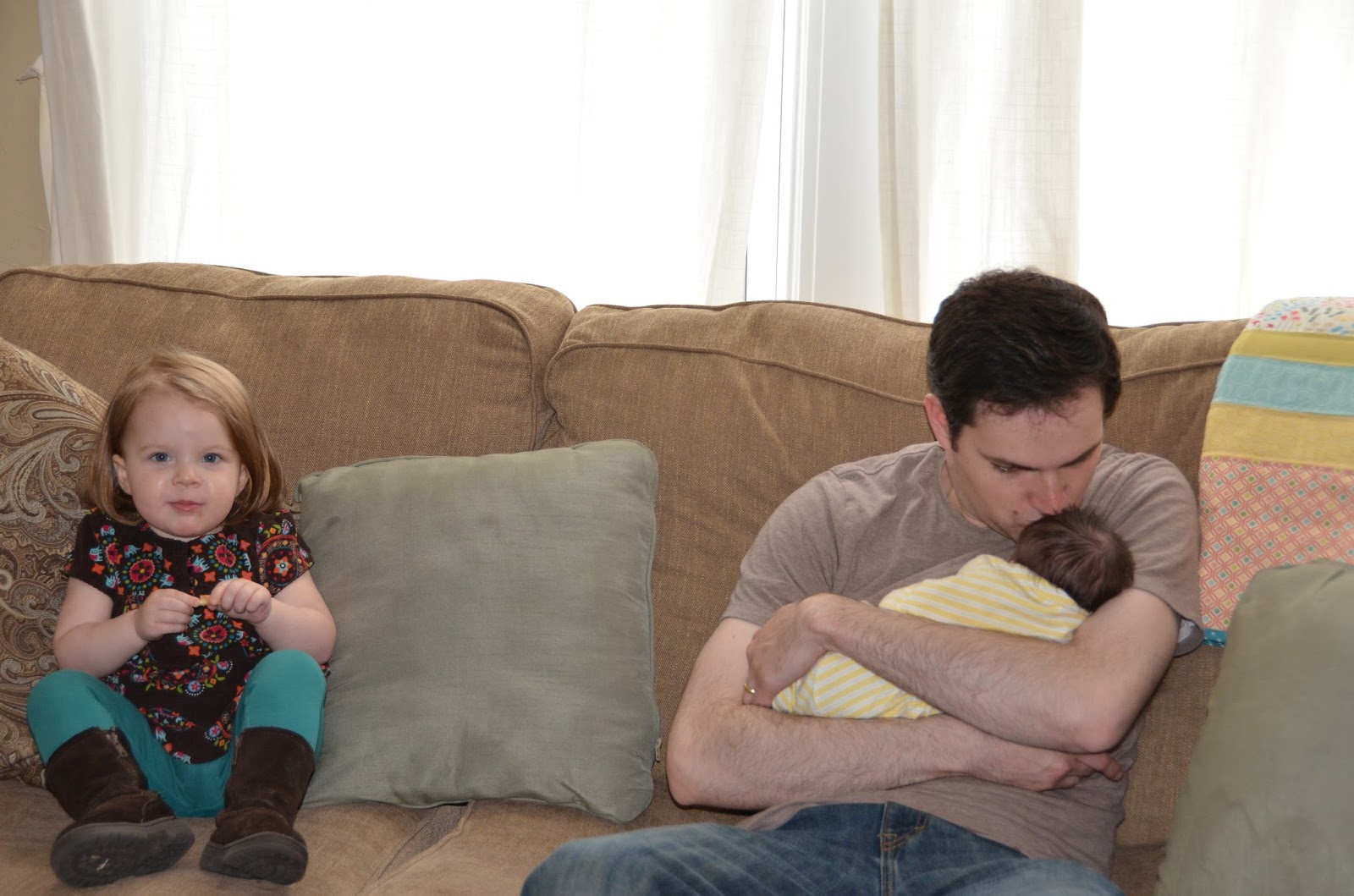 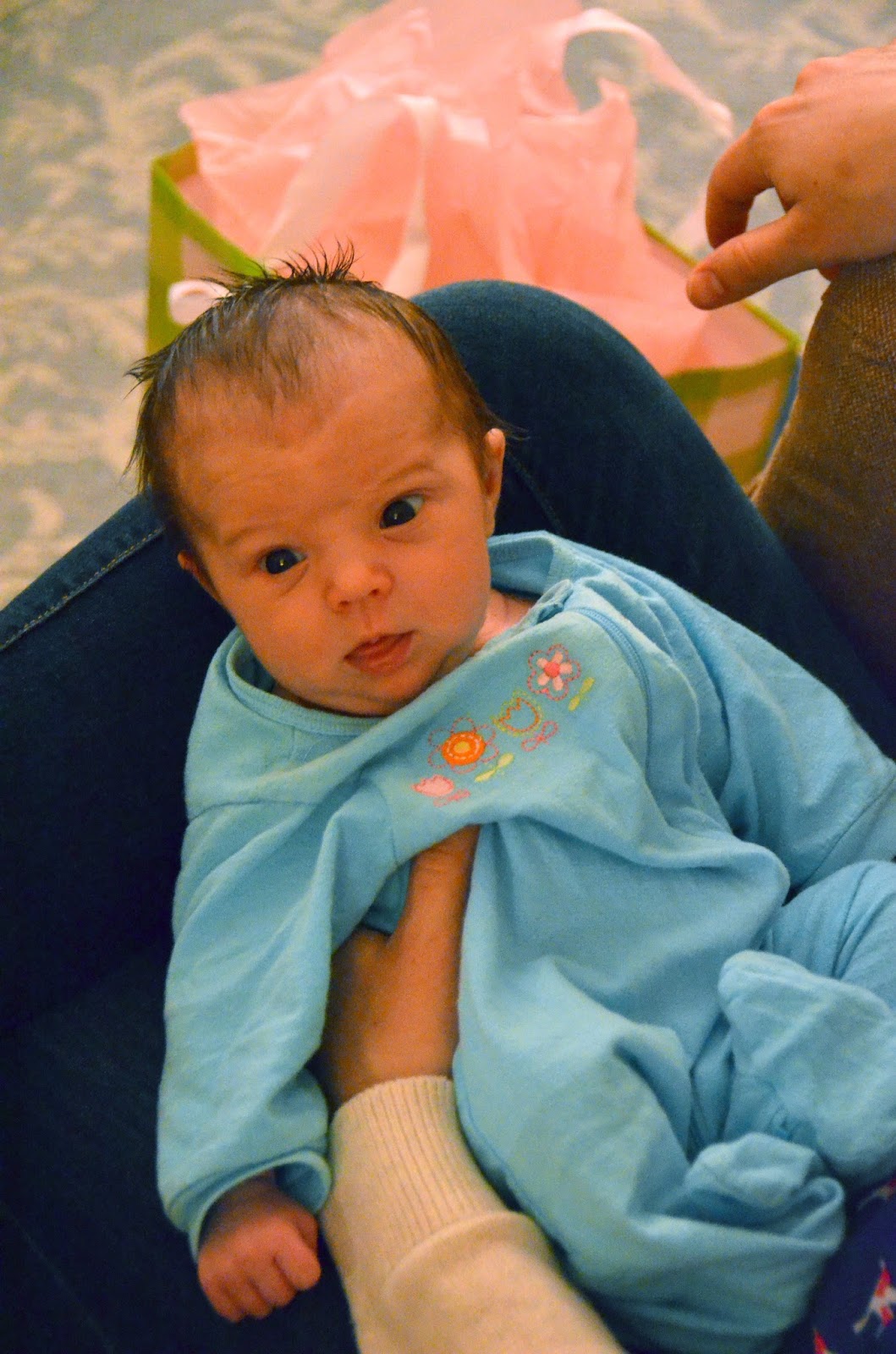 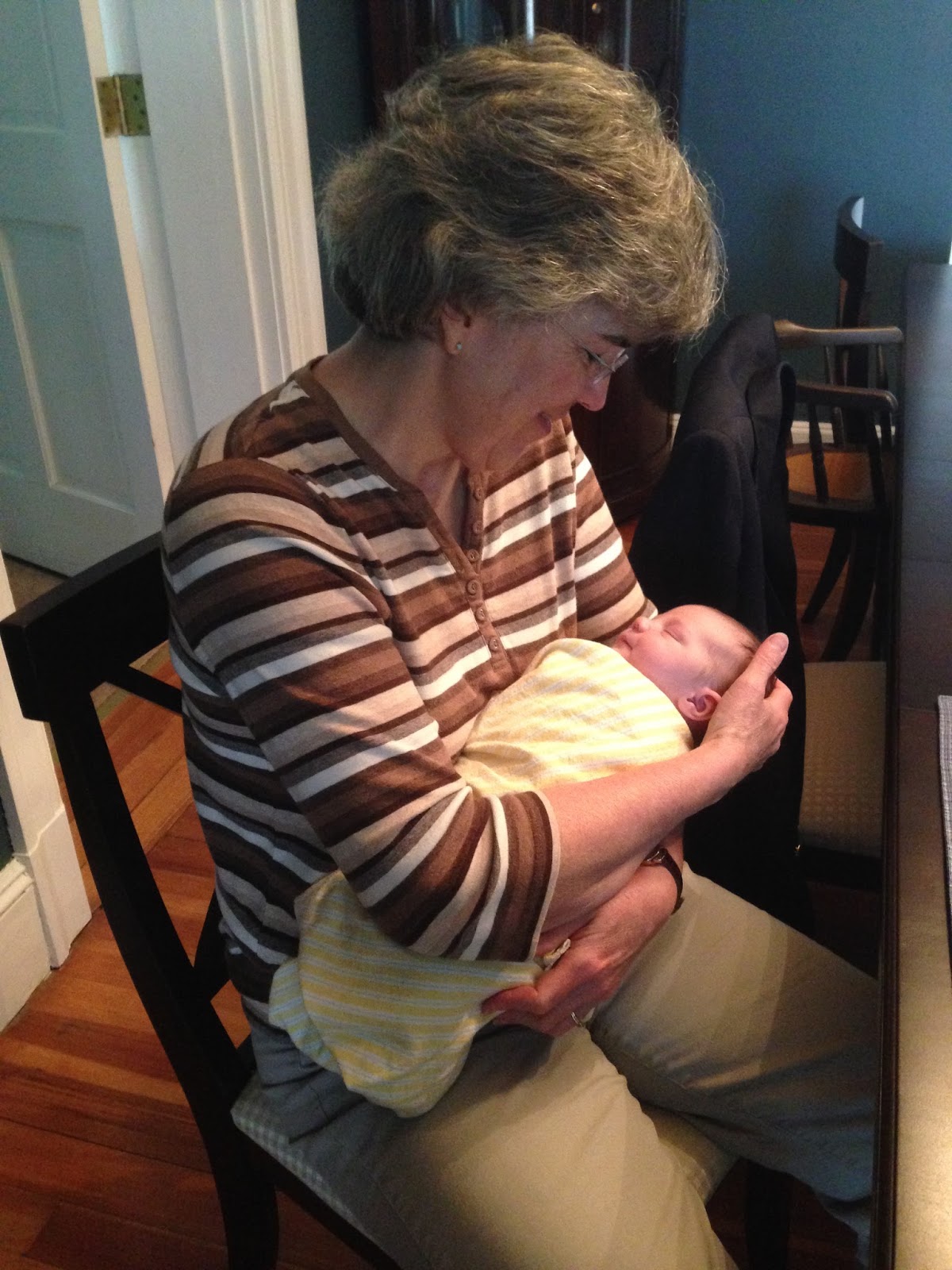 I love the little faces she makes. 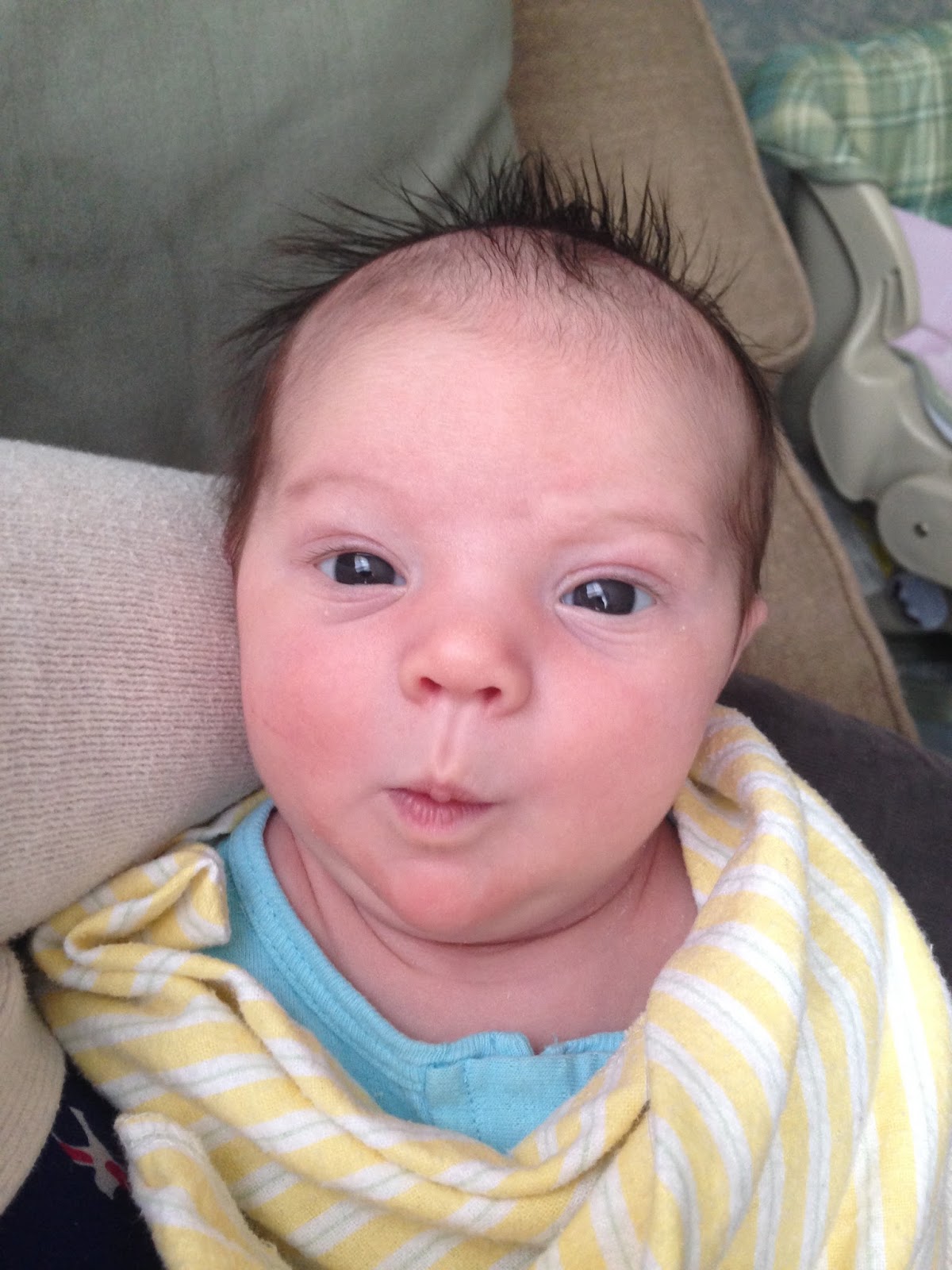 I love her Dad, too. 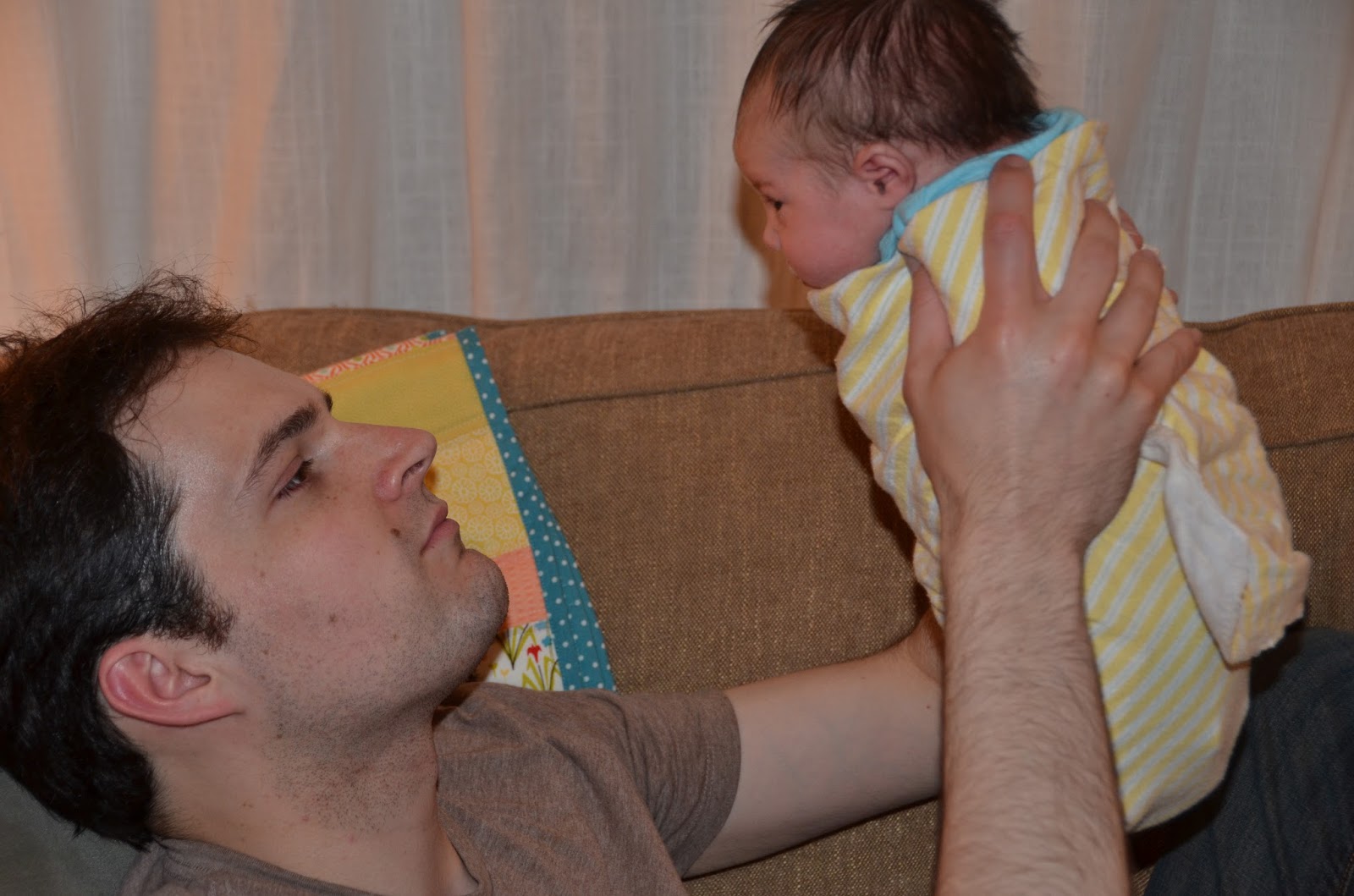