Remember how I said I made some amazing granola?

It turned out so good. I has cinnamon and coconut in it - how could it not be good?

This morning I had it sprinkled over coconut milk yogurt, with fresh fruit. 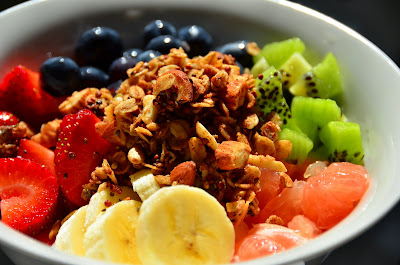 To make the granola, I used Elise's recipe for quinoa granola, with some modifications. So what I ended up with, after my changes, was basically this:

[You can add dried fruit like raisins, dried cherries or cranberries, etc. after the granola is cooked.]

Combine dry ingredients. Melt coconut oil and combine with maple syrup, then pour over dry ingredients and mix well. Spread onto a baking sheet lined with parchment paper or foil, and bake at 225 for 60 minutes.

I'll be honest, I wasn't sure that buckwheat groats and uncooked quinoa would be particularly tasty in granola, but I take Elise's recommendations seriously so I decided to give it a try. Sure enough, this granola is amazing! So crunchy, and cinnamon-y... and really pretty easy to make. I know some of the ingredients are unconventional, so you might have to make a trip to Whole Foods, or make a few substitutions. But it's worth it - I highly recommend checking out Elise's original recipe or using my modified version and making this granola.

I've been enjoying mine with yogurt, or mixed with puffed kamut cereal and swimming in almond milk.

Or munched on plain while blogging.