We have an animal problem in our house. Back when we were first moving in I had discovered a small pile of some sort of nuts in one of the upstairs closets, leading us to suspect that either the former owners liked to snack in dark corners or squirrels had been inside. As we settled in and the weather got colder, we could hear scratching sounds inside the walls at night. And then we started discovering new nut piles upstairs. Nathan, being a sensible fellow, set a Havahart trap. When that yielded no results, he added four spring traps all around the main upstairs room (currently that room is just being used for storage until we refinish the floors). Well, he checked those traps dutifully every night and every morning, but he didn't catch anything. Sometimes they were sprung, sometimes the peanut butter was even eaten, but no luck catching the squirrels.

Well, first on our to-do list upon returning home from our Christmas visit to California was to clean and organize the upstairs and try to find how these pests are getting into our house. We Lysol-ed everything and reorganized all our boxes of stored stuff. We really got a lot done!

Then, as I was going through a final box of clothes, I discovered that I had unwittingly done what Nathan could not do.

There was a dead animal in that box of clothes. (I may or may not have shrieked upon the discovery. Ahem.) Well, it was my box of clothes, and I was the one who found the critter, so I think it's fair to say that I trapped that animal with a cardboard box when Nathan could not do it with five elaborate traps - a situation I find quite humorous.

We aren't quite sure what this little fella is. (Or rather, was.) It's not one of the gray, fluffy-tailed squirrels I'm used to seeing, but I'm not sure it's uniformly red enough to be a red squirrel either. It's tail is quite skinny (although that could have something to do with being dead) and the hair on it's ears is not long. I don't think it could be a chipmunk, unless there are varieties of chipmunks with less defined stripes on their backs. For now I'm thinking it must be a red squirrel (a conclusion reached in part thanks to this helpful website), although it doesn't look like most of the red squirrels a Google image search turns up. If it is a red squirrel I feel rather badly, because apparently red squirrels are classified as endangered species, and here I went and killed one with a cardboard box.

Any thoughts on this guy's identity, friends? 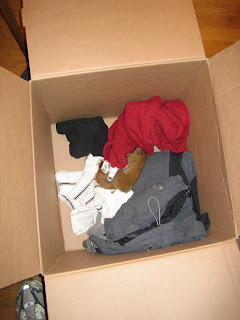 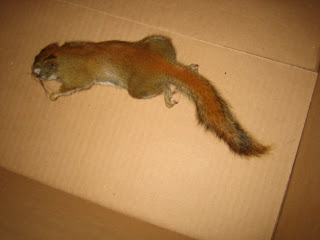 (Apologies for the graphic images.)

And now, I'm off to launder everything that was in that box at least three times in a row.