Yesterday was certainly an historic day for Massachusetts and for the whole country. My true-blue state elected a Republican to the U.S. Senate! Nathan and I voted in the morning, and then went about our usual day's work. At 8 p.m. we turned on the news to see the numbers start coming in. It didn't take long for Scott Brown to be a few percentage points ahead of Martha Coakley, and since city precincts are usually counted before suburban ones, we figured the numbers would only get better as the night went on. So... we drove into Boston to join the campaign party at the Park Plaza hotel! I had gotten a text message from the Brown campaign saying anyone and everyone could go join the party, and we figured, why not? This was history being made. We arrived in plenty of time for Coakley's concession and the ensuing celebration.

We didn't have our camera, so an iPhone photo of the two of us enjoying the festivities will have to suffice. 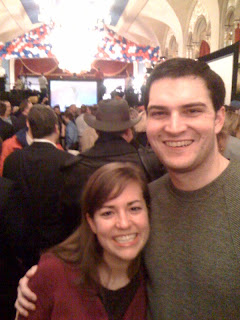 After Brown's speech, it was getting late so we headed for home. As we walked out of the hotel lobby and onto the street, who should we see near a curb but Mitt Romney! We stood about three feet away from him, and I looked and Nathan and Nathan looked at me, and we both confirmed that yes, that was him in the flesh.

Sadly, he was talking on his cell phone, and we didn't want to be the kind of people who would interrupt a man's phone call, so we didn't say anything to him. (My brother - a Romney fan - couldn't believe me when I told him that. I think he's going to disown me.)

[Anyway, I didn't vote for him in the primaries, so it might have been awkward to talk to him.]

Of course liberals are saying it all comes down to Coakley's poorly-run campaign (and her campaign was indeed terrible), but I tend to agree with Hugh Hewitt's assessment:

This was not a stealth vote. The Democrat in this deep blue state did not lack for resources. The Senate Democrats provided the money. The president came on demand and cut the ads. The netroots were pulsing with unheeded appeals to voters.

The voters knew exactly what was on the line and they voted, decisively, against Obamacare. "It will raise taxes. It will hurt Medicare. It will destroy jobs. It will run us deeper into debt," Brown declared about Obamacare in his speech. "And we can do better!"

Nathan and I are happy and relieved at Brown's victory. For anyone living under a rock, the New York Times has a good summary of Brown's win and what it means for both political parties, for the Senate, and for our nation.

Email ThisBlogThis!Share to TwitterShare to FacebookShare to Pinterest
Labels: politics