It appears that the ninth annual "No Pants Subway Ride," instituted and organized by Improv Everywhere, was a big success. Supposedly as many as 3,000 commuters participated this year in cities across the globe - exponential growth for an idea that started with just seven people in 2002. Participants climb aboard their morning commute as usual, and then calmly shed their pants. The main requirement is for people involved in the event to act as though nothing unusual is going on; many continue to sip their morning coffee or sit down and proceed to read the day's newspaper. 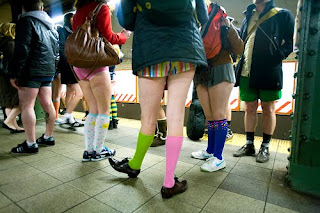 Most notable was the event's "home base" observance in New York City, but other improv groups organized branches of the event in other cities, such as Capitol Improv's version on the D.C. metro.

Would witnessing such an event make you smile, or shake your head with disapproval?