The sewing machine isn't the only new thing here in our apartment. FavoriteBoy built me a nice kitchen shelf to go above the stove, and I painted it to match the cabinets that I had repainted last year. Didn't it turn out nicely? I love having the extra space. 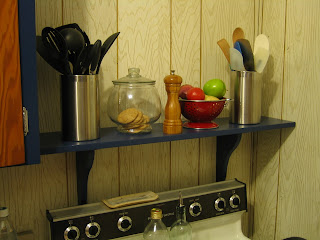 And I love having a handy husband! Recently we took a trip to Sears and expanded FavoriteBoy's tool collection. After all, when we got married we got lots of lovely things for the kitchen, and not so many things for the toolbox. Here's the acquired collection - both old and new - on display. 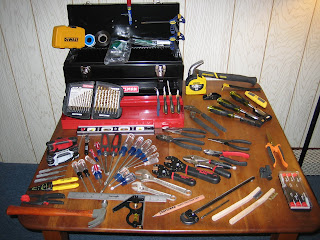 Lest you think that FavoriteBoy is the only handy one around our home, I want to point out that one of the hammers on the table was mine long before we were married. I also own some screwdrivers, pliars, and a ratchet set. When I lived in this apartment alone while FavoriteBoy was still in school, I sanded, painted, replaced doorknobs, drilled out stripped screws, and did all sorts of other fun things.

That said, it's awfully nice to have FavoriteBoy around to do some of those things now. Since we got married, he has replaced the yucky old shower walls with nice new ones, taken up the carpet (?!) in the bathroom and put down vinyl, and built me several useful shelves in addition to the one pictured above.

And sometimes while he works around the apartment, I make him pizza! 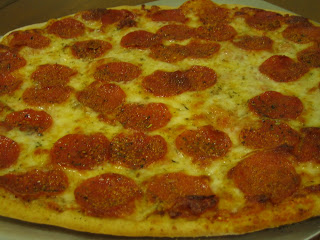 It's called division of labor, and it works for us.