Last week FavoriteBoy graciously offered to stop at the store on his way home from work and pick up a few things I needed - even though those things were mostly vegetables, and FavoriteBoy hates vegetables! As he was putting two zucchini into a bag for me, he told me over the phone, "My grandmother used to make zucchini brownies, I think. And I really liked them." Naturally, since I'm always looking for ways to get some veggies into Nathan's stomach, I jumped at this opportunity. "Make that four zucchini, not two!" And as FavoriteBoy came home with the groceries, I began looking for a zucchini brownie recipe. I found a basic recipe, and from there I made my own adaptations to make the brownies healthier: using coconut oil and applesauce instead of vegetable oil, reducing the sugar by about 1/3, using partly whole wheat flour, etc.

The results were surprisingly delicious, although a bit more cake-like than brownie-like. And while FavoriteBoy wasn't quite impressed, the brownies were a big hit at a movie night with friends, where people commented on how much they liked a dessert that wasn't quite so sweet - and how they were glad they didn't have to feel too guilty consuming a brownie! 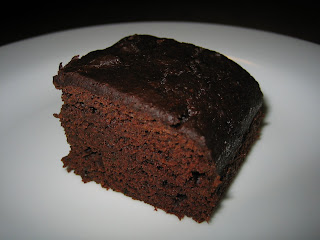 2. In a medium bowl, mix together the coconut oil (melted), applesauce, vanilla, and sugar. In another bowl, combine the flours, cocoa powder, baking soda, and salt; stir into the oil and sugar mixture. Fold in the zucchini and mix until the mixture becomes moist. Spread batter evenly into the pan.

3. Bake for 25 to 30 minutes in the preheated oven, until brownies spring back when gently touched or until a toothpick inserted in the center comes out clean. Allow brownies to cool somewhat before cutting into squares.
Posted by sarah marie at 7:37 AM