After trying quite earnestly for a month or more, just a week or so before turning nine months old, Marie crawled!

Her biggest fan and devoted cheerleader, Nell, could hardly contain her excitement.

Her enthusiasm was short-lived, however, as it soon became apparently that Ree's newfound mobility made it that much more possible for her to access all the things that Nell considers hers and hers alone. 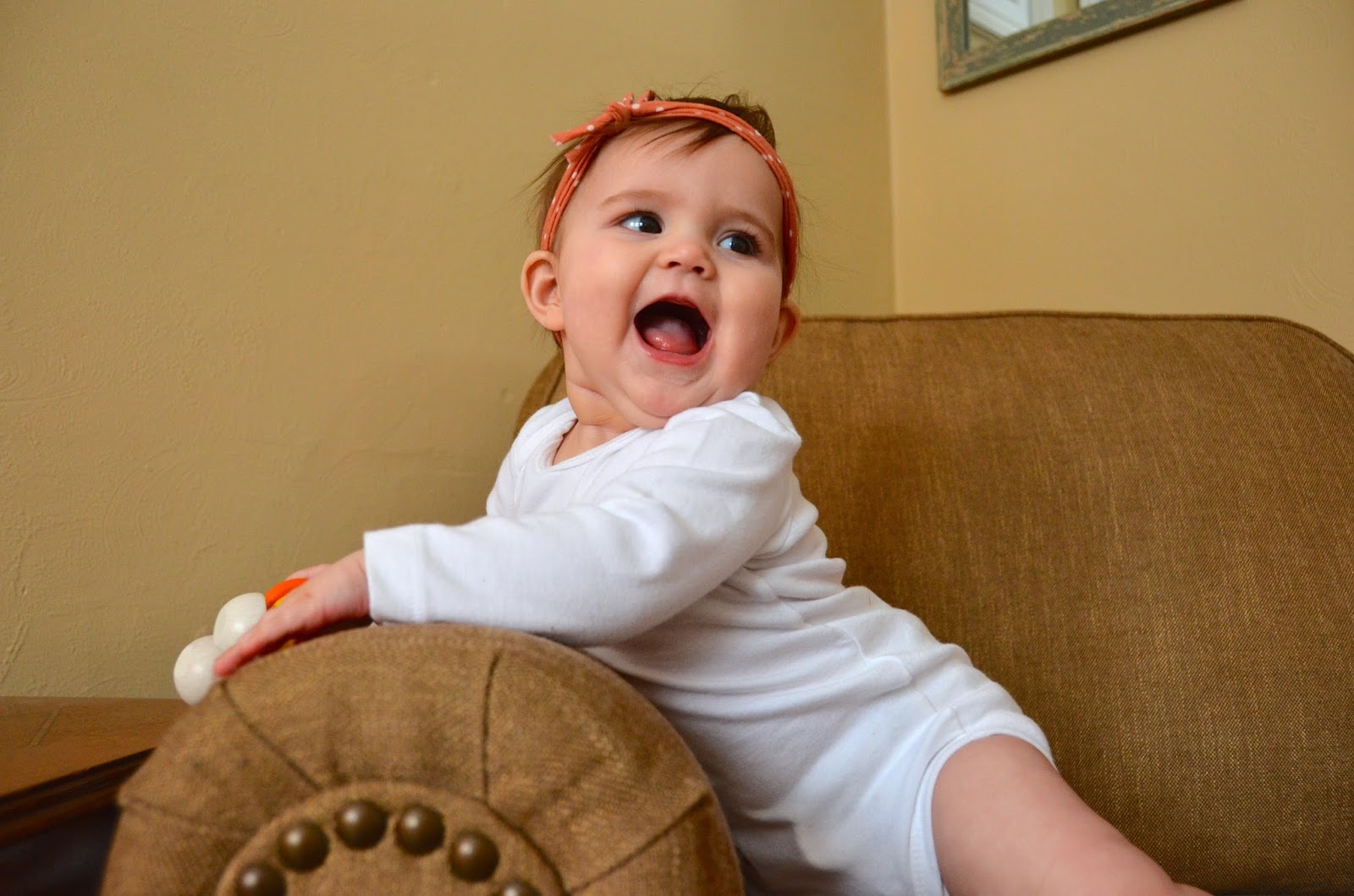 Since Nell was only marginally mobile - in the form of scooting - when she was nine months old, having a crawling nine month old is uncharted territory for us.  The places she goes!  The trouble she can get into in the blink of an eye!  The sweetness when she makes a beeline for me, pushes herself up on my feet, pulls herself to a stand while holding to my knees for dear life, and makes it clear that, were she able, she would scale the heights of my entire body to climb into my arms.  It's enough to make one's heart explode. 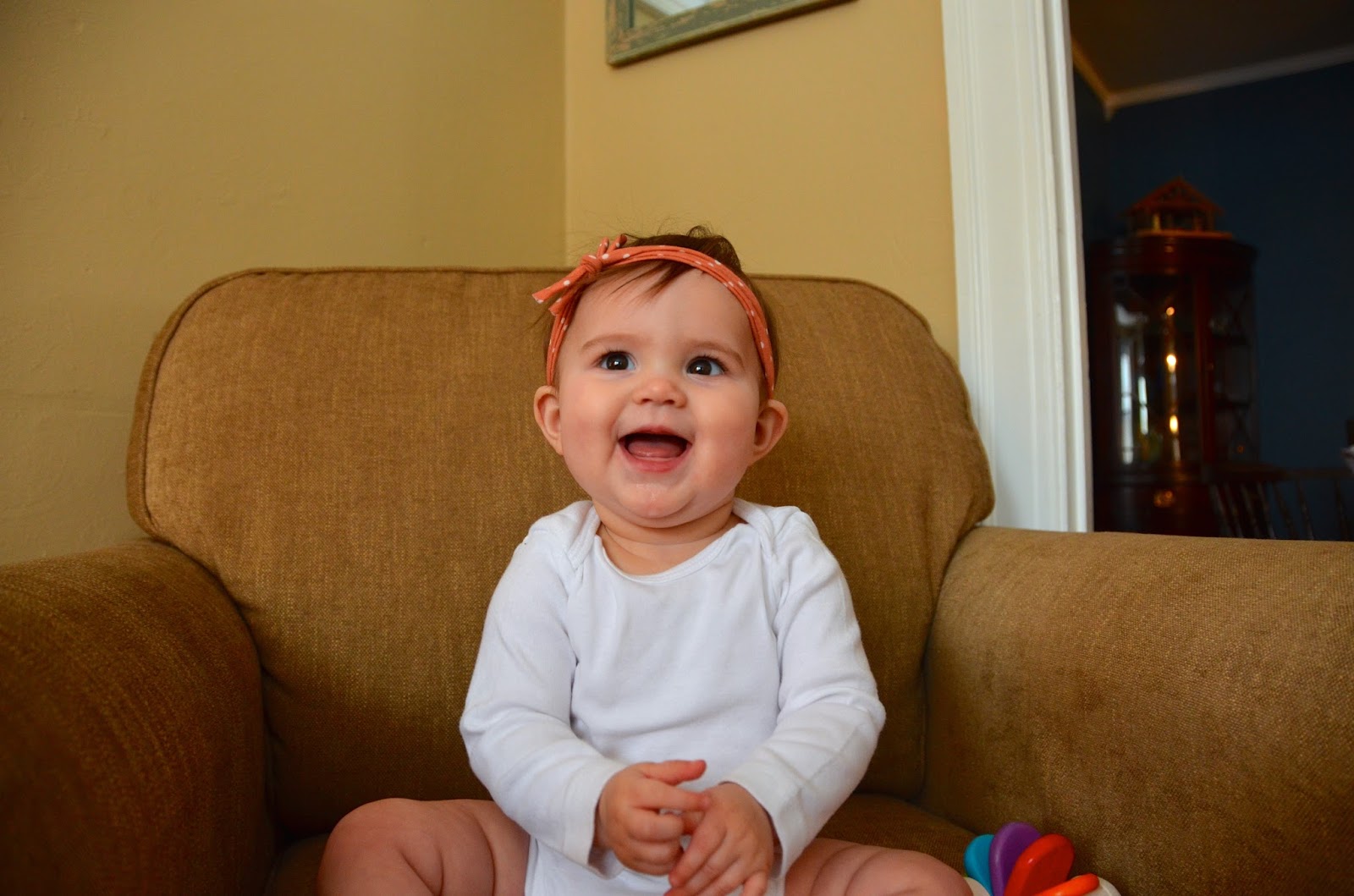 In addition to crawling, Marie's mobility extends to flipping over faster than you can blink an eye {particularly when you're trying to put a diaper on her}, going from her tummy to a sitting position, pulling herself up on everything and everyone, and practicing her push-up position on all fours. 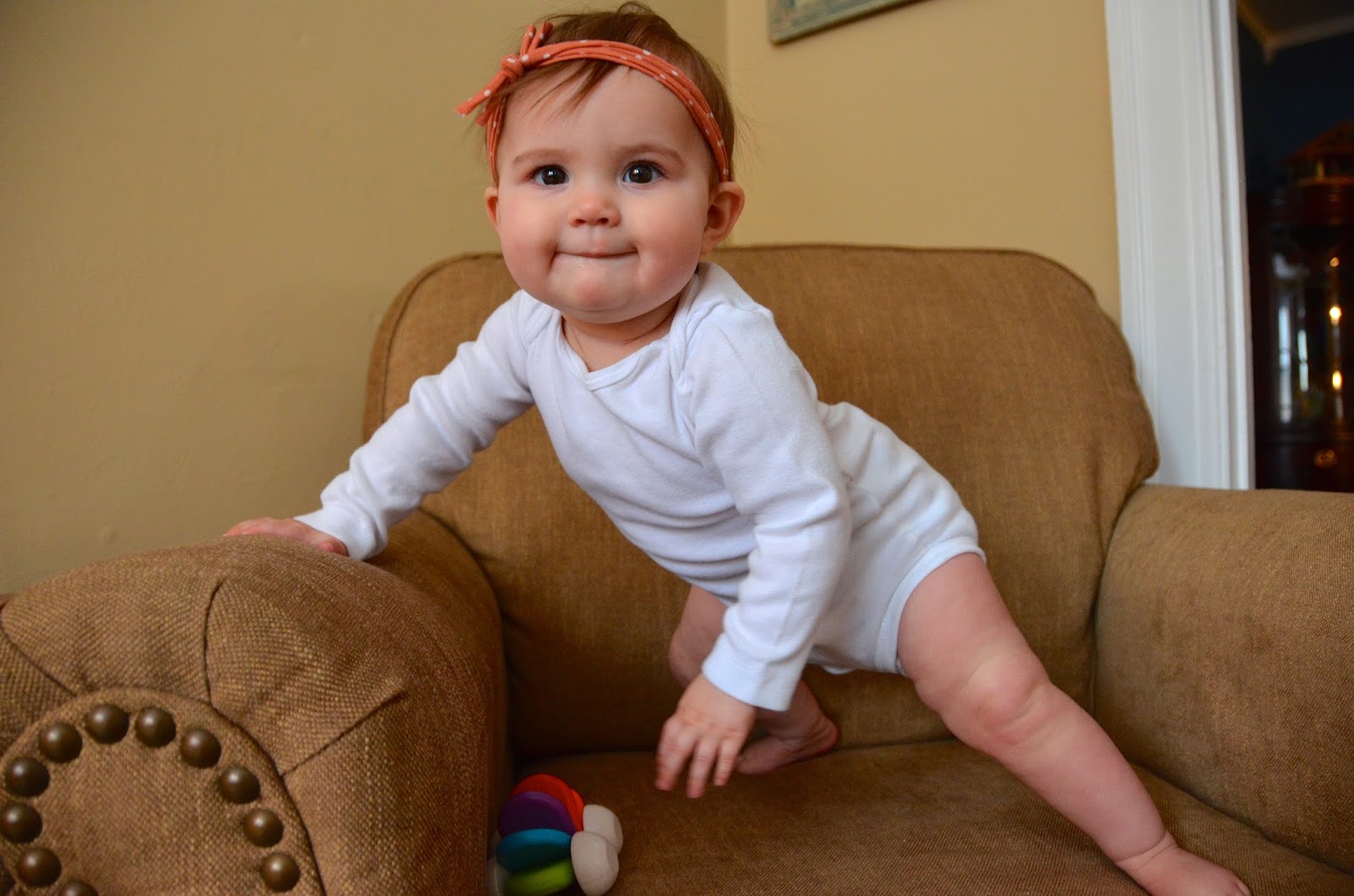 {don't worry; I had my camera in one hand and the other hand extended to catch her while she practiced these wild acrobatics on the chair}
Ree seems to understand a lot of what's going on, and when I ask her, "Do you want me to pick you up?", she responds by reaching her arms up towards me.  Once she's in my arms, she has the sweetest way of trying to scramble up my torso, burrowing into my shoulder and putting her arms around my neck and nuzzling in as close as possible.

This girl likes to eat food, which is further uncharted territory for us, since Nell has essentially no interest in food whatsoever until she was 11 months old.  Marie, although not a single tooth has yet emerged, eyes our food eagerly and devours almost anything she is offered with great enthusiasm.

Despite her passion for solid food and her frequent nursing sessions, if my memory is correct, she weighed in at about 17.5 pounds at her 9 month appointment, putting her a good five pounds under what her big sister weighed at this age!  {Previously: Nell at nine months.}  Nell was always in the 90-somethings for percentiles as a baby, and Ree was in the 36th percentile for weight at her appointment.

I briefly contemplated trading her for a chubbier one, but then I squished her thighs and found them more than adequate, so, we're keeping her. 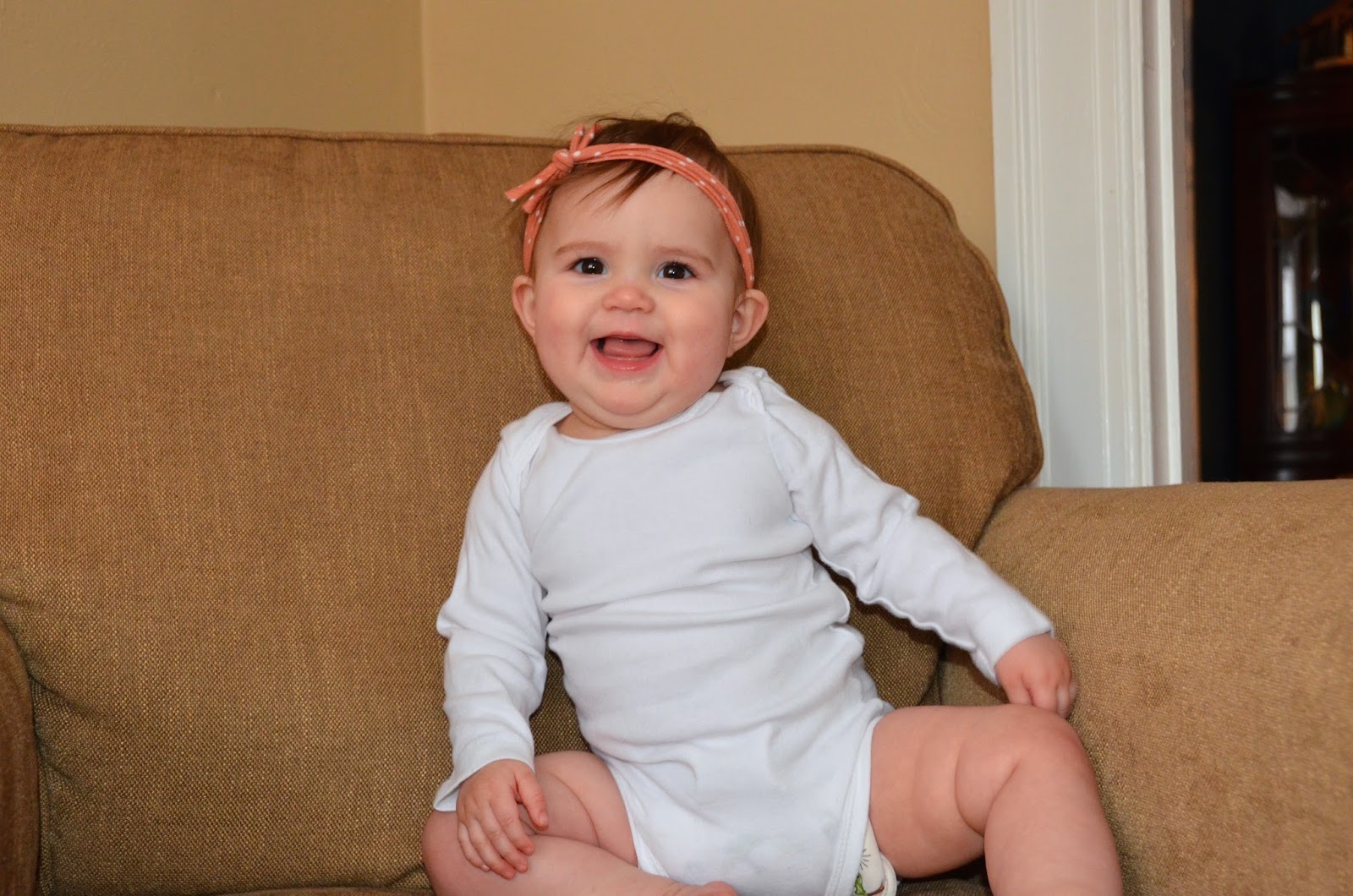 Nicknames: Ree, Ree-Ree, Riesling, Maroo, Marizzle (this one is compliments of Aunt Hannah), Baby Wee, and... Martin.  Because Aunt Hannah says with her very straight hair, she resembles Martin Luther.  Point taken, Aunt Hannah.  I shall make more frequent use of those baby hair clips.

Expertise: peeing in the potty, slobbery open mouthed expressions of love all over Mama's face, making messes, finding every electrical cord in the house, grabbing the glasses off your face before you can do anything in self-defense, pulling people's hair and trying to stuff it into her mouth with gleeful abandon.

Vocabulary: gagaga, bababa, dadada.  A month ago, to her mother's delight, she said quite clearly and on several occasions, "Ma-ma-ma," but she is impertinent, and these days when I ask her to say "Mama," she replies, "Dada!"
Aspires to: set a world record for greatest number of night wakings; continue to be Master of The Forty Minute Nap; eat an entire sheet of paper in solitude before being discovered. 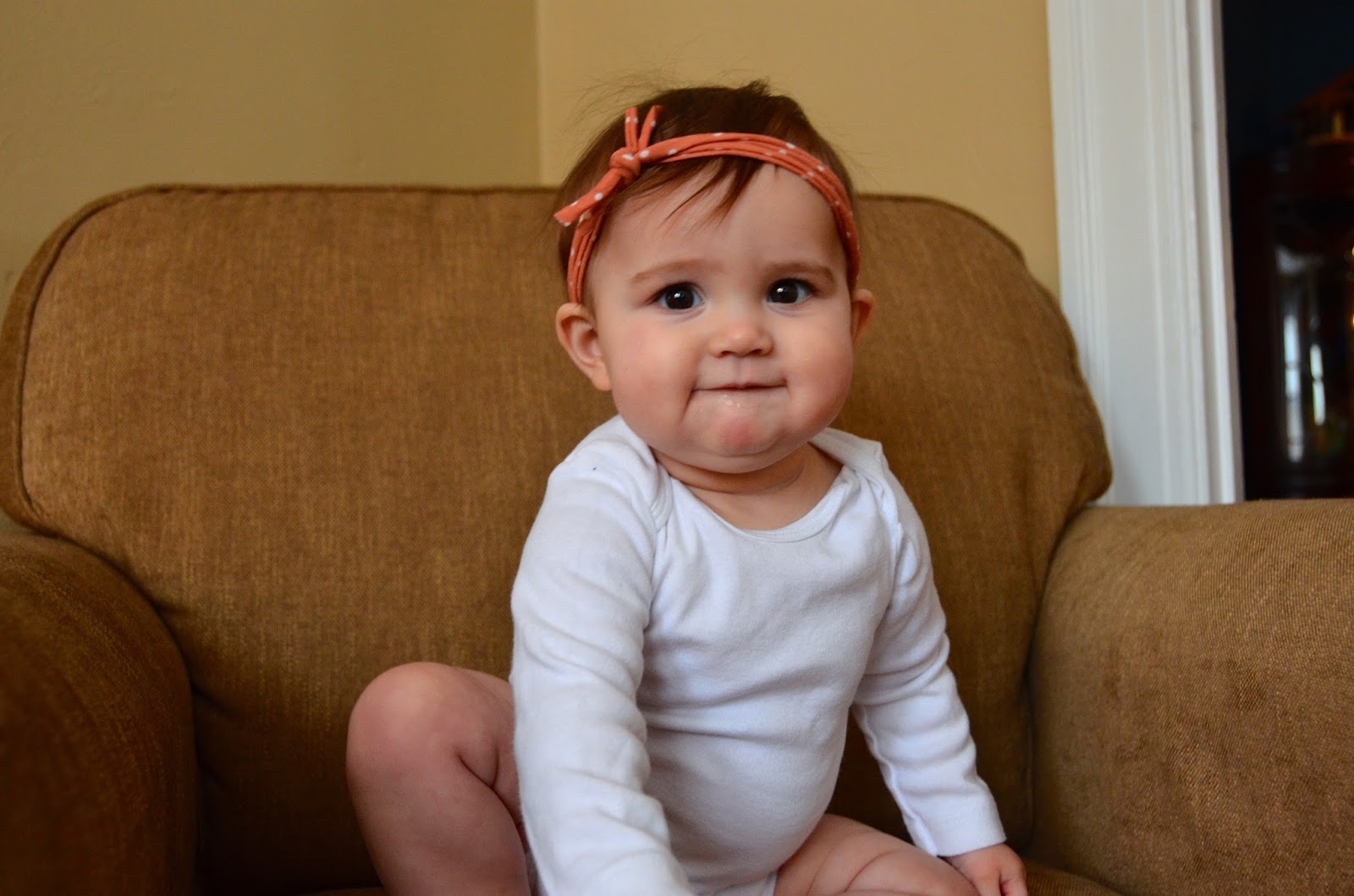 You are not what one might call a good sleeper.  Your little friend Lydia, for example, can be placed in her carseat or bed and will just fall asleep quietly and contentedly.  Can you imagine that?!  I can't.  You nap on our guest bed, where I can lie beside you while you fall asleep and then use my best ninja moves to escape without waking you.  You usually start the night on the guest bed, too -with pillows all around the edges as barriers - but after a couple of wakings, I bring you into our bed and you finish the night snuggled with me.  Sometimes I wish I could just spread out like a starfish and have the whole bed to myself for a while, but then when you wake up smiling at me each morning, I find myself quite glad you're there with us.  I'm sure you'll sleep on your own when you're ready!

This morning, Daddy brought Nell into bed to snuggle with us, and I sat there feeling like the luckiest woman in the world.  Nell squealed with delight to see you, you absolutely lit up in return, and the two of you proceeded to play together with squeals of glee - well, and the occasional squeal of a baby being squished by an overly-enthusiastic big sister.  Is it overly optimistic of me to hope that, loving each other as much as you now do, you'll be friends for life?  Maybe so, but I can't help hoping.

The truth is, I probably hear the words, "NOOOOO MAWIE!  That's MIIIIINEEEE!" at least a dozen times a day.  But it doesn't even compare to the number of times I hear, "You're so SWEET you little SWEETIE!" and "You're so cute!" and "I love you!"  And you, Marie, you're pretty patient with all of the above - the toy-snatching and the affection-smothering alike. 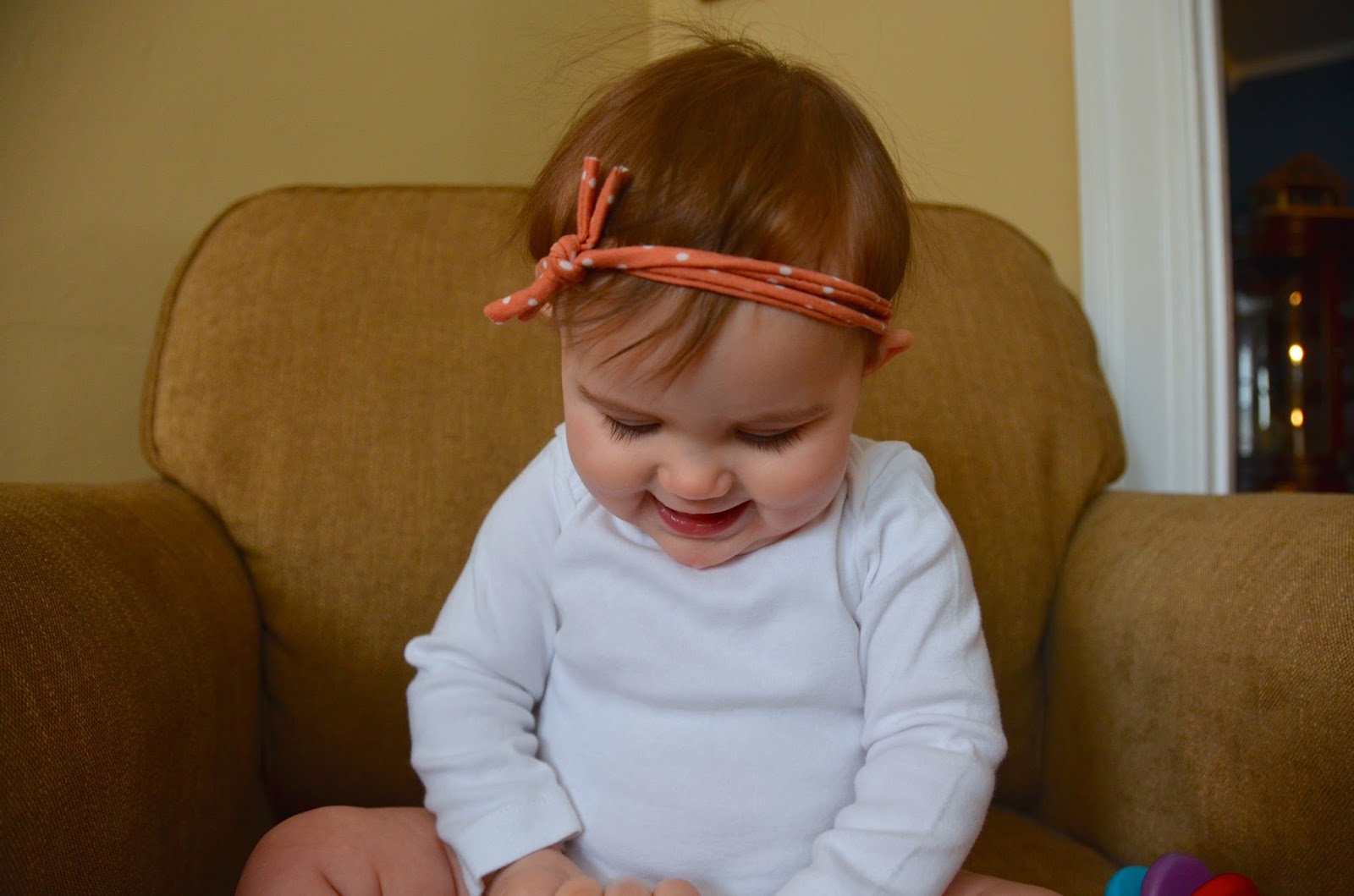