January 2021: I found this in the drafts of this poor neglected blog -- written a year and a half ago with all the many photos compiled, but never published.  I'm pressing 'publish' now, long after the fact so I can enjoy looking back on what already feels like nearly a lifetime ago.  Those tiny faces!  Where does the time go?
* * *
Oh summer 2019, you were perfectly full and perfectly empty in all the right ways.
The Autumn equinox has come and gone, and while we're still having some warm days, today I reached for a sweater and pulled out my slippers.  I always love autumn, but this year I noticed a delightful willingness to say goodbye to summer, untinged with regret.  In this stage of life, quite often I reach the end of a season or other phase and think of all that I meant to do but didn't manage.  Pregnancies or young babies, either of these things can leave you at the end of a summer feeling like you failed to make the most of it all.

And it's all that we did do that has me feeling content, peaceful, satisfied.

Nathan and I went to England, which really deserves a post of its own.  It was unforgettable, and exactly the kind of thing I thought we'd never get to do, except that then ... we did.  And the girls got to spend quality time with their Aunt and Uncles and Grammy and Grandpa, and had the most marvelous time. 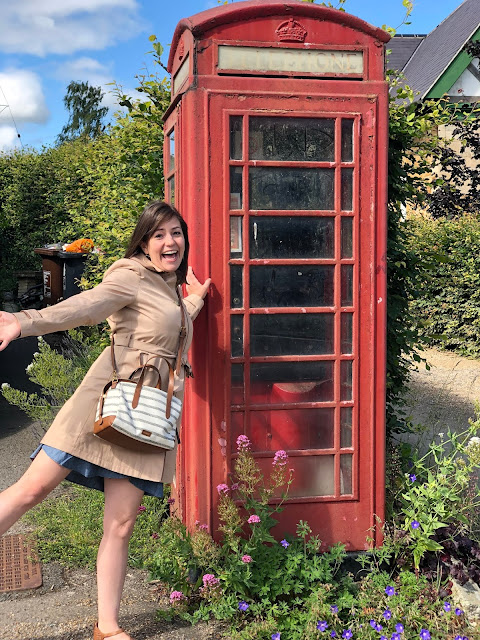 When we returned home it was already early July, all of June having been occupied by the trip and also, leading up to it, last-minute trip planning (for a trip that was, in fact, quite last-minute).  We settled right into the summery goodness of a very relaxed work schedule for myself, unstructured days in the sun, working in the yard for hours on end, and actually finding myself with time to cook!  During the academic year it's a thorn in my flesh that my work schedule makes it quite difficult to make dinner.  I try to plan ahead with crockpot meals or pre-prepped things but it's always a bit frantic somehow.  Summers are my delight -- picking up farm produce from our CSA share each week, planning menus and actually having time at my disposal to make zucchini galettes, fresh tomato sauce, deliciously homemade salad dressings, Swiss chard pancakes, fruit crisps.  You might imagine that few of these things are Nathan's favorites -- and you would be correct -- but the girls and I do not care!  We eat homemade sourdough pizza topped with heaps of fresh arugula with wild abandon while Nathan eats his sad, everyday slices of pepperoni.
There were days at Appleton picking up our farm share each week, and visiting with baby cows and climbing trees while we were at it. 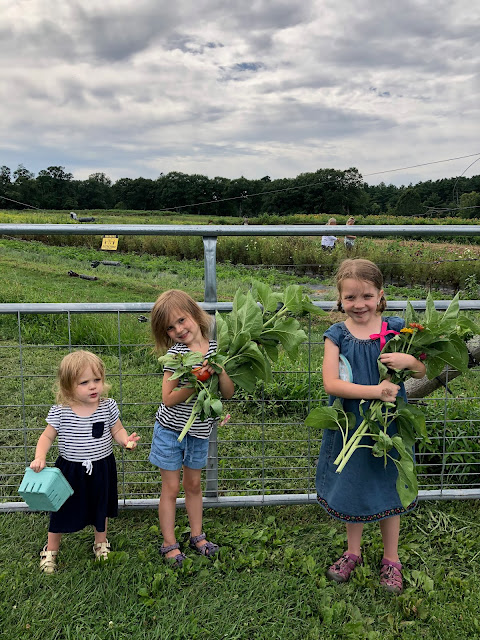 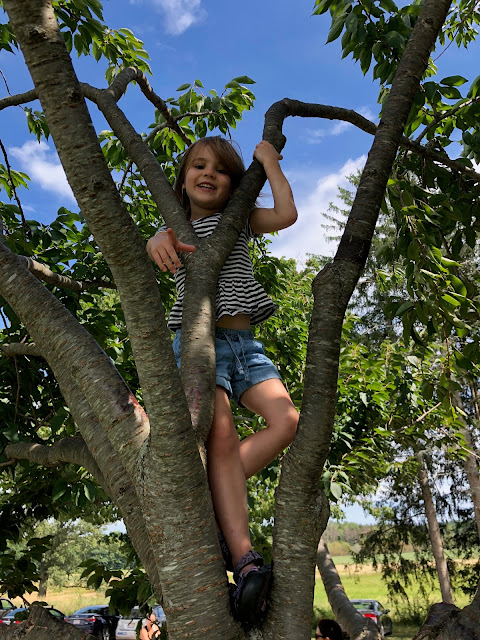 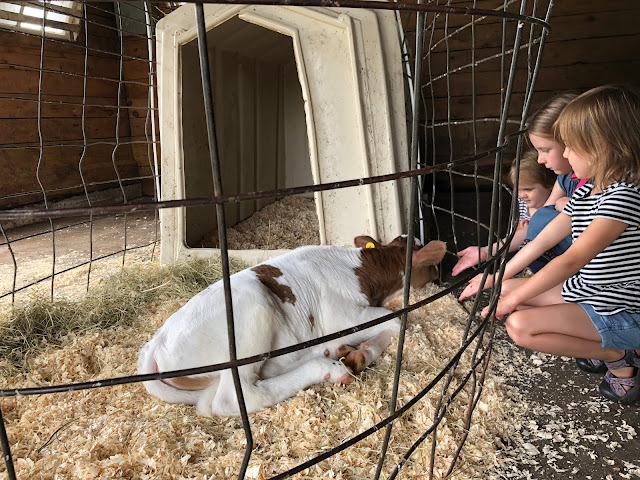 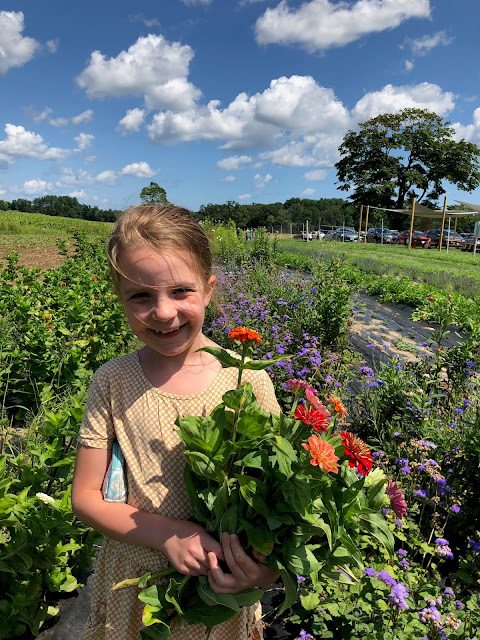 There were a few delightful beach days here and there; perhaps not as many as I'd have liked, but we enjoyed them. 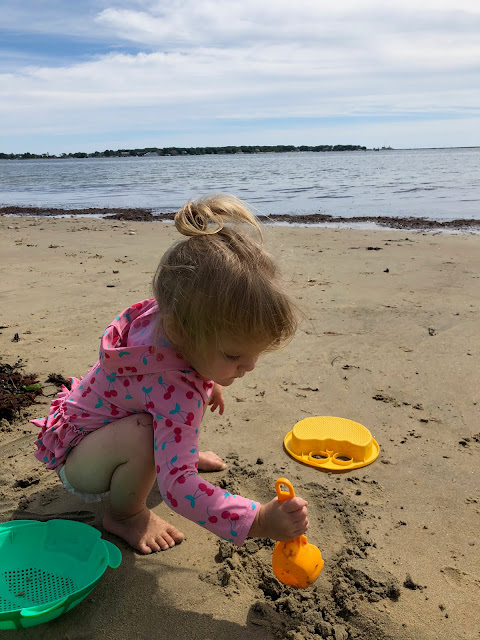 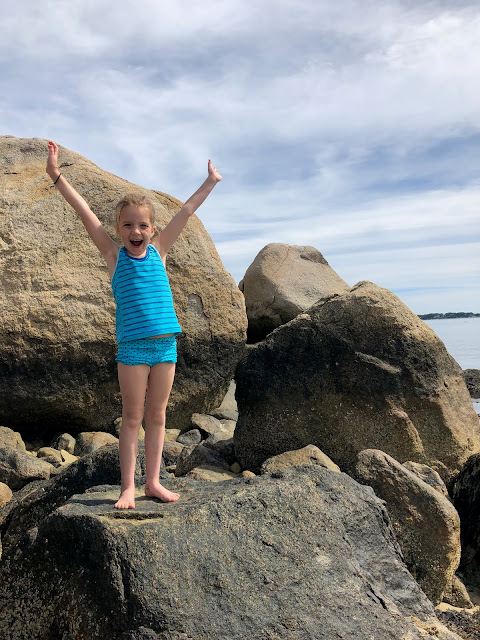 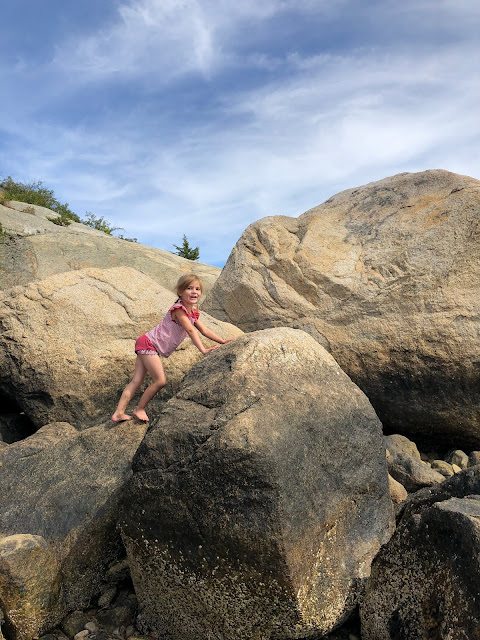 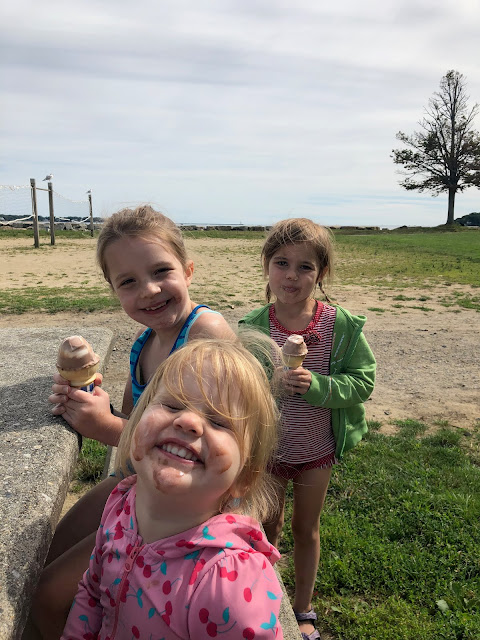 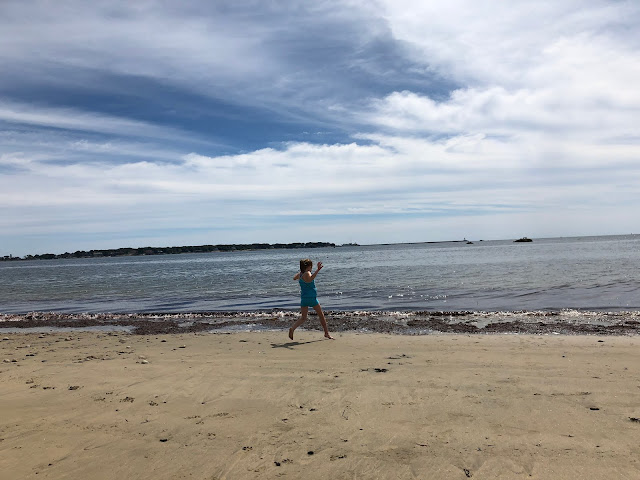 A visit to Aunt Hannah and Uncle Andrew's house allowed this Charlotte's Web lover to live out her favorite moments and scenes from the book on their delightful rope swing. 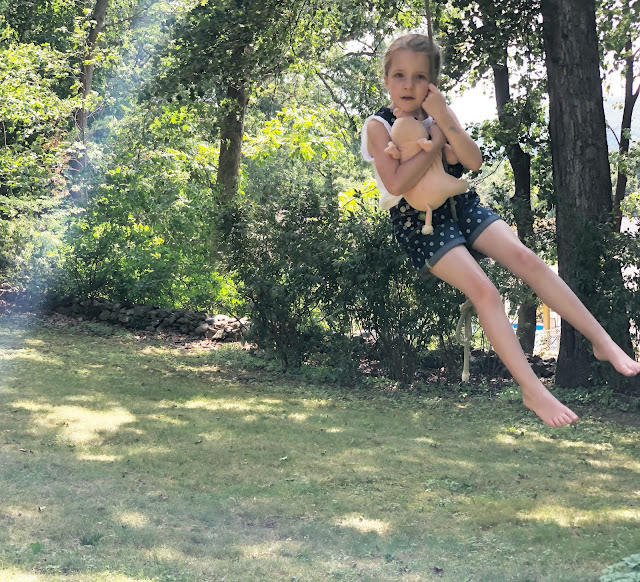 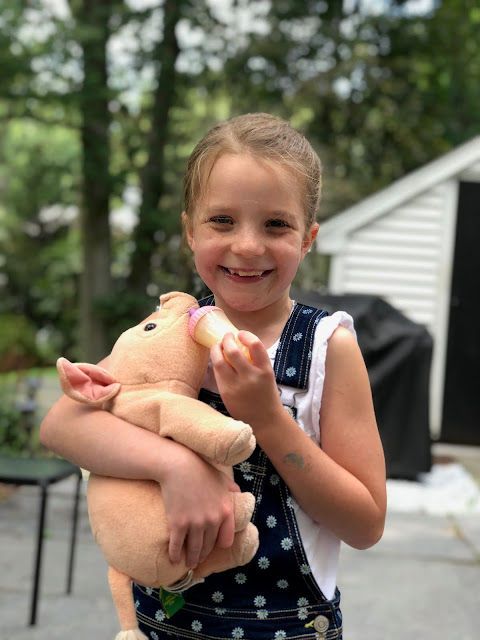 There were a few activities here and there, like an orchestra concert followed by ice cream in Rockport. 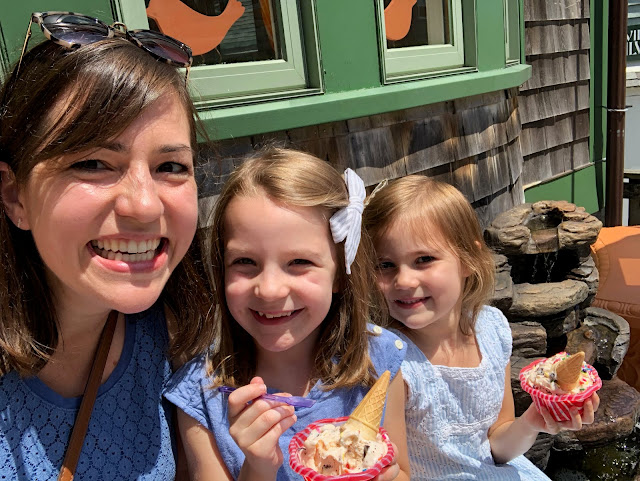 Nell and Marie both did a six-week, once-a-week ballet session, and a week of a particularly wonderful and one-of-a-kind VBS program, and a week of summer "camp" mornings run by dearly beloved teenage friends, and in spite of all these wonderful activities summer managed to feel perfectly leisurely, restful, and balanced. 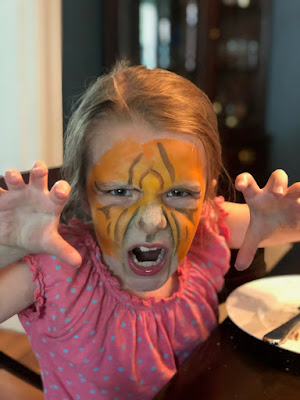 A family day trip to Lowell planned by Nathan ended up being a real highlight: 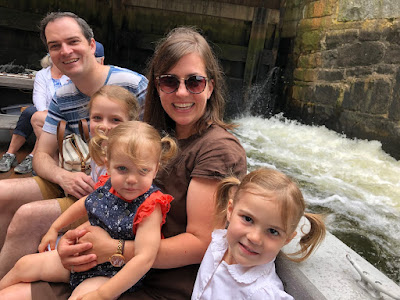 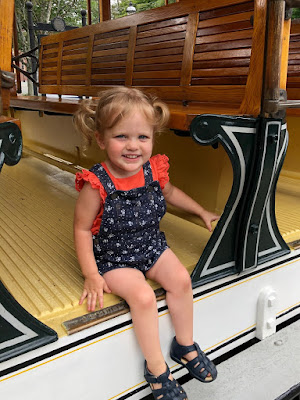 {presenting: Molly on a Trolley!}
Frequent visits to a local library provided us long moments to watch monarchs transform before our eyes.  And the older two girls participated in the summer reading program, logging many hours of reading / listening to good books. 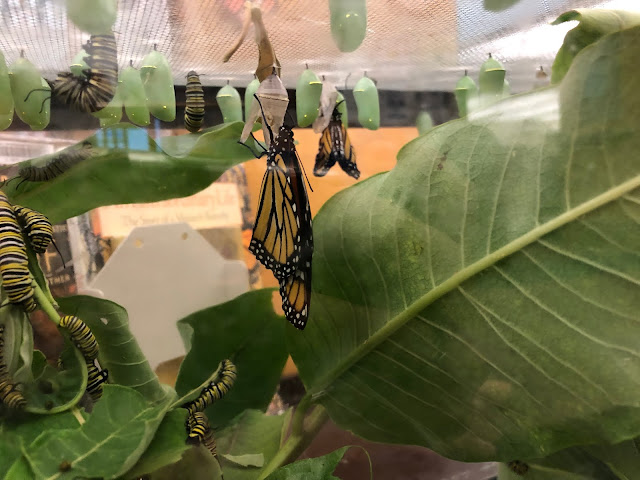 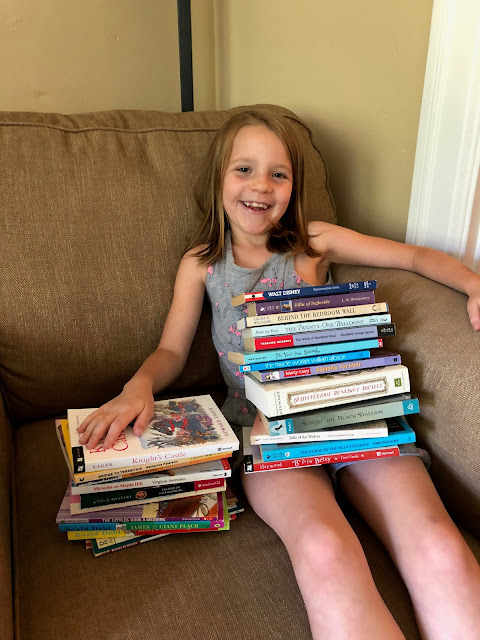 And mostly, for July and August, there were long days spent at home, soaking up sunshine and relaxed time together. Children playing in endless unstructured hours... life as it should be. 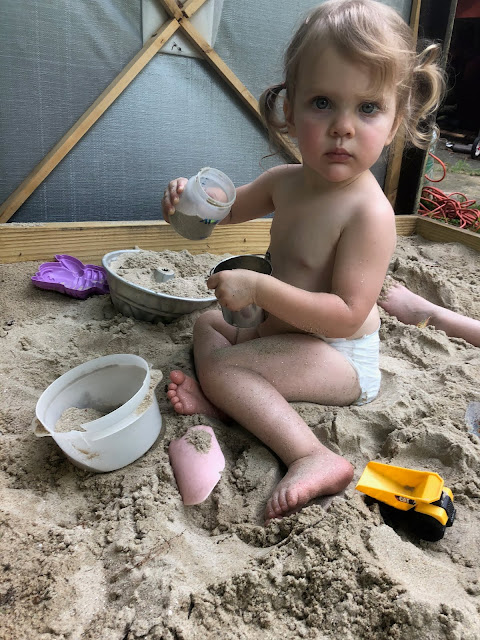 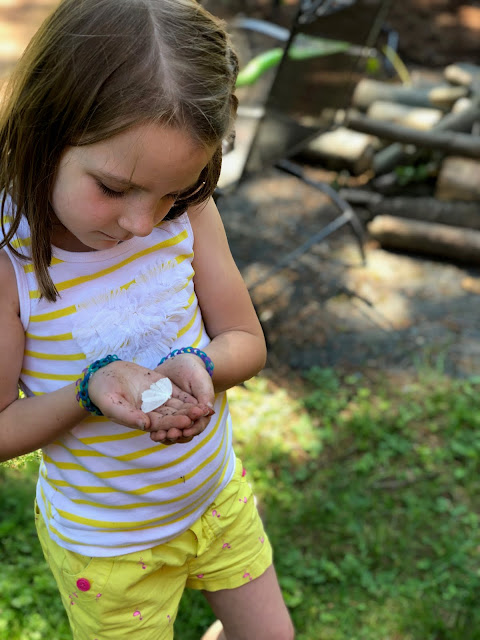 The house had a dumpster parked in our driveway for pretty much the entire summer.  We began many projects (including repairing our shed, the source of all the demolition materials requiring said dumpster!) and finished few if any of them. 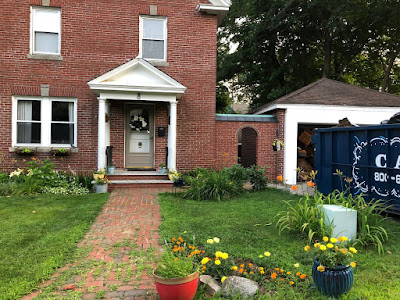 And with plenty of days of endless hours just being at home, we may not have gotten as much done as I'd have liked, but we didn't do nothing, either.  I did extensive work creating new garden spaces where we used to have overgrown, mostly-dead trees.  The girls created a garden space of their very own (and continued to plant and grow in it this past summer, too). 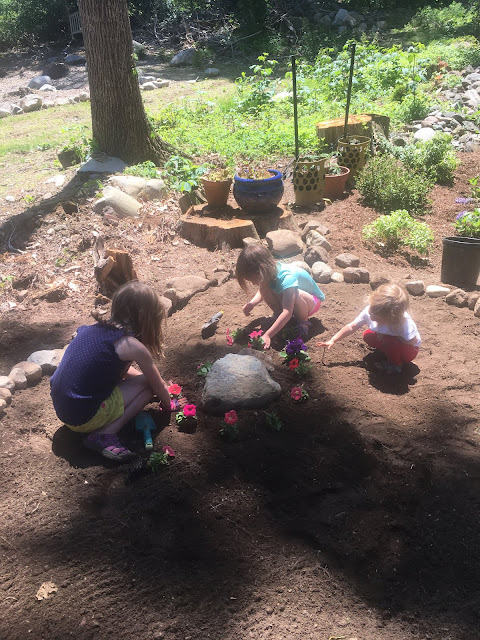 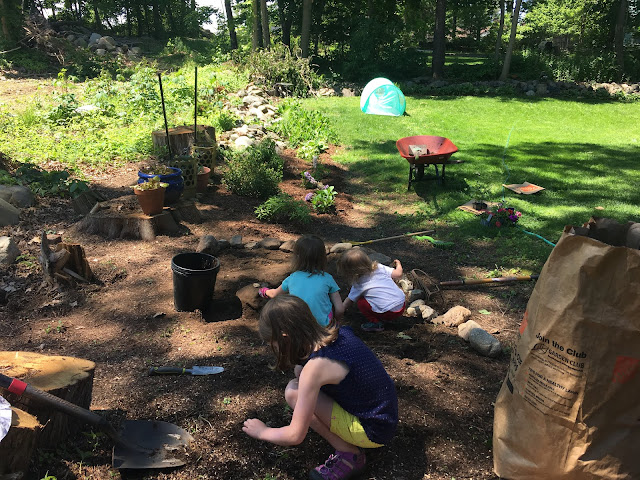 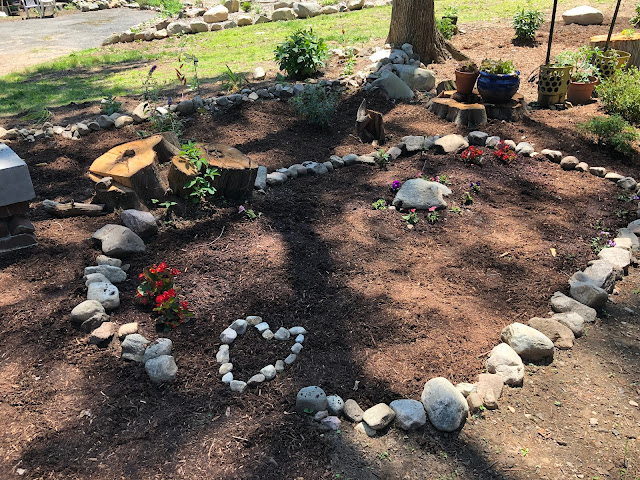 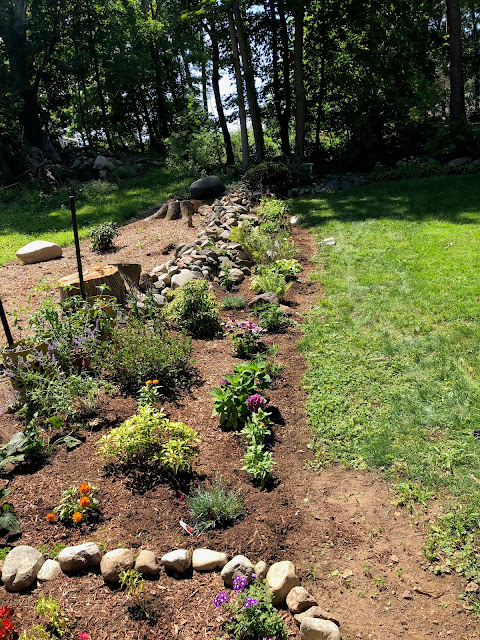 {a new space for perennials ... and it actually gets sunlight now with the big overgrown trees gone!}
Looking back on it all, aside from the once-in-a-lifetime trip to England, it was very much like any other summer and probably very much like anyone else's summer.  Perhaps the only difference is that this year, instead of wishing we had done more or feeling as though we missed out, I was able to sit in a place of true contentment and heartfelt gratitude.  The fixer-upper we call home still needs work.  The children were usually filthy.  The house was often untidy.  Books I wanted to read remained unfinished, and plenty of friends led more exciting lives than we did over those summer months.
But I look back at these pictures and can't help thinking we had more than our share of a truly wonderful summer. 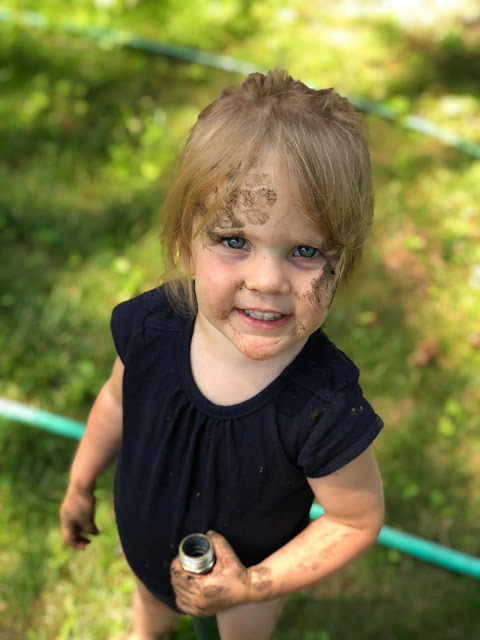 Posted by sarah marie at 8:44 AM No comments:

Reflections on Preschool for Ree

As I recently reflected on a completed year of first grade with Nell, it seems only fitting to look back at pictures and quotes from Ree at the beginning of last year, her "preschool" year.

Q: What do you think people learn in preschool?
A: "I don't know.  I think they do some drawing of pictures of God.  And painting people who was in the world and who died.  And learn to be a grown up.  And how bout learn to do games that are really tricky to do.  Learn to stay in bed at night and be nice while Daddy is at work and don't scribble things."

Q: What do you most want to learn this year?
A: "Games!  And I want to have apple cider.  And learn to fly.  Peter Pan can teach me!"

Q: What are some of your favorite things to do?
A: "Dress up and be a ballerina.  Have a pizza every night.  Play a game.  Get ice cream!  Just be fun.  Play at a park.  Have people over for dinner and have a barbecue.  Be close to the ocean and go to a beach!  I like to go on hikes, and I like to go outside and ride my bike and... nothing else.  And read with Mom." 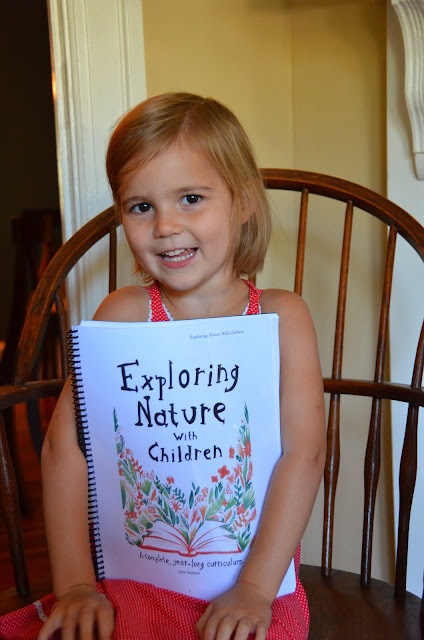 These pictures kind of crack me up, because they demonstrate how the best laid plans don't always go according to plan.  Exploring Nature with Children is a wonderful book I planned to work through with the girls, specifically as Marie's preschool curriculum.  Guess how far we got with it?!  Ha-ha-ha... not very far.  With that said, we did explore nature a whole lot on our own terms.  We just didn't quite keep up with the book.  So... I think I'll give myself a second chance this coming year for Kindergarten!  And I'm totally fine with the fact that we didn't get to it very often last year.  Instead let's think of all the things we DID do with that fun four-year-old pictured above (who is now FIVE!). 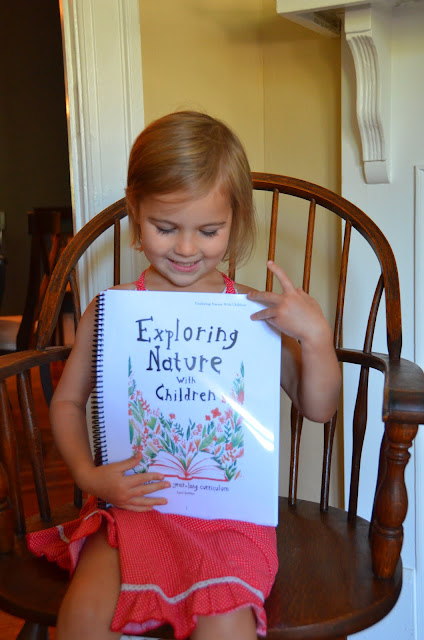 We hiked with friends in rain, shine, and snow.  We observed the year both seasonally and liturgically and threw ourselves into all the delightful seasonal celebrations we could think of.  Ree likes participating in math conversations she hears Nell and I engaging in, and has begun experimenting with adding numbers.  She can write her name, as well as most of the letters of the alphabet, although I wouldn't say her letter formation is 100% correct yet.  She came alongside Nell for so much of first grade this past year that she learned a lot about trees, seeds, the night sky, the history of Britain, Native Americans, and many of the other things we studied, too.  She easily transitioned from her balance bike to a two-wheeler, she can pump herself on a swing, and she can do a pretty decent cartwheel.  She helps me wash dishes, she chops fruit and veggies quite well with a paring knife, she cracks eggs and helps cook and bake.  She adores ballet and is uncommonly graceful for a five-year-old and enjoyed a six-week class over the summer.  She loves being outside and helping me garden, and holds a particular affinity for weeding as well as watering.  She is quite the artist with her drawings and paintings, which range from heart-warming to hilarious.  She has a connection with nature and a particular love of bugs at the moment, as well as cows, bunnies, and birds.

We may not have utilized that lovely curriculum as well as it deserved to be utilized, but I tend to think we still had a pretty good year last year.

A lot of things have changed over the past year, but one thing remains the same:

She is still quite frustrated that she can't fly, and even seems to believe that she used to know how to, but has forgotten!
Posted by sarah marie at 6:11 PM No comments: