on caring for sick children

For the past six weeks or thereabouts, on any given day, it seems that someone in this house has been sick.  Sometimes even two or three people.  It's not fun, it's not glamorous, and at times, it messes with your head and you start to believe there couldn't possibly be anything worse than caring for sick kids and being sick.

{Then you read a news headline and get a much-needed reality check and wipe those runny noses gratefully, of course.}

The thing about caring for sick kids, I've realized, is that it reduces your daily tasks down to the utmost of basics: keeping the children alive and caring for them tenderly and holding them and loving them and meeting their most basic needs.  On the sickest of sickly days, there is little to no cooking to be done except the simplest of nourishing things.  There are no big projects, and no extra cleaning or tidying gets done.  The sewing projects or home improvement tasks are put aside.   Work might have to be canceled to be made up later.  Fevered brows are felt and kissed, temperatures taken, natural healing remedies attempted.  The entire household forgets what it's like to sleep at night, and longs for the days when the healthy baby only awakened every three hours all night long -- a luxury compared to both children's seemingly ceaseless wails throughout the long, sick nights.

In February, when the first bout of illness struck, the suitcases from our recent travels were left unpacked by the door for three days as I walked circles around the house to get the baby to sleep against my chest in the Ergo, wiped a toddler's runny nose 1,000 times and gently applied lotion to her chapped nose and lips despite her protests.  There was no getting anything of substance done; all but the most necessary of work-related tasks were put on hold.  No errands, no getting out of the house.  No paychecks to show for my overtime mothering hours.   My existence was reduced to the barest of minimums and by only the second day of the first bout of illness I was asking myself, "what is the MEANING of life?"

These minimal things don't feel easy to do.  Sometimes, they feel really hard.  It is hard to change sheets and launder them again and again.  It is hard to hold children constantly for endless days.  It is hard to wipe dribbling orifices and go without sleep night after night.  It is hard to eventually succumb to illness yourself.  But part of the hard-ness of it is the frustration of all the other things that aren't getting done.
If what you have to offer isn't a symphony orchestra performance or a violin lesson, if it isn't a Pinterest-worthy home-cooked dinner, if it isn't a passably clean home or at least the children dressed in clean clothes each day, then what are you offering?  What is left, really?  There have been days this winter when I felt devoid of anything to offer.  With nothing tangible to show for my long days and nights, what was I accomplishing?

And then my toddler would wrap her arms around my neck when I lifted her warm little body to carry her from the couch upstairs.  "I love you so, so much, Mama," she'd croak, too sick even to whine very much at that point.  Or the baby would snuggle close against me, finally relaxing into slumber as I held her upright so she could breathe clearly.

And I would remember that what felt to me like long days of nothingness was everything to these little ones. 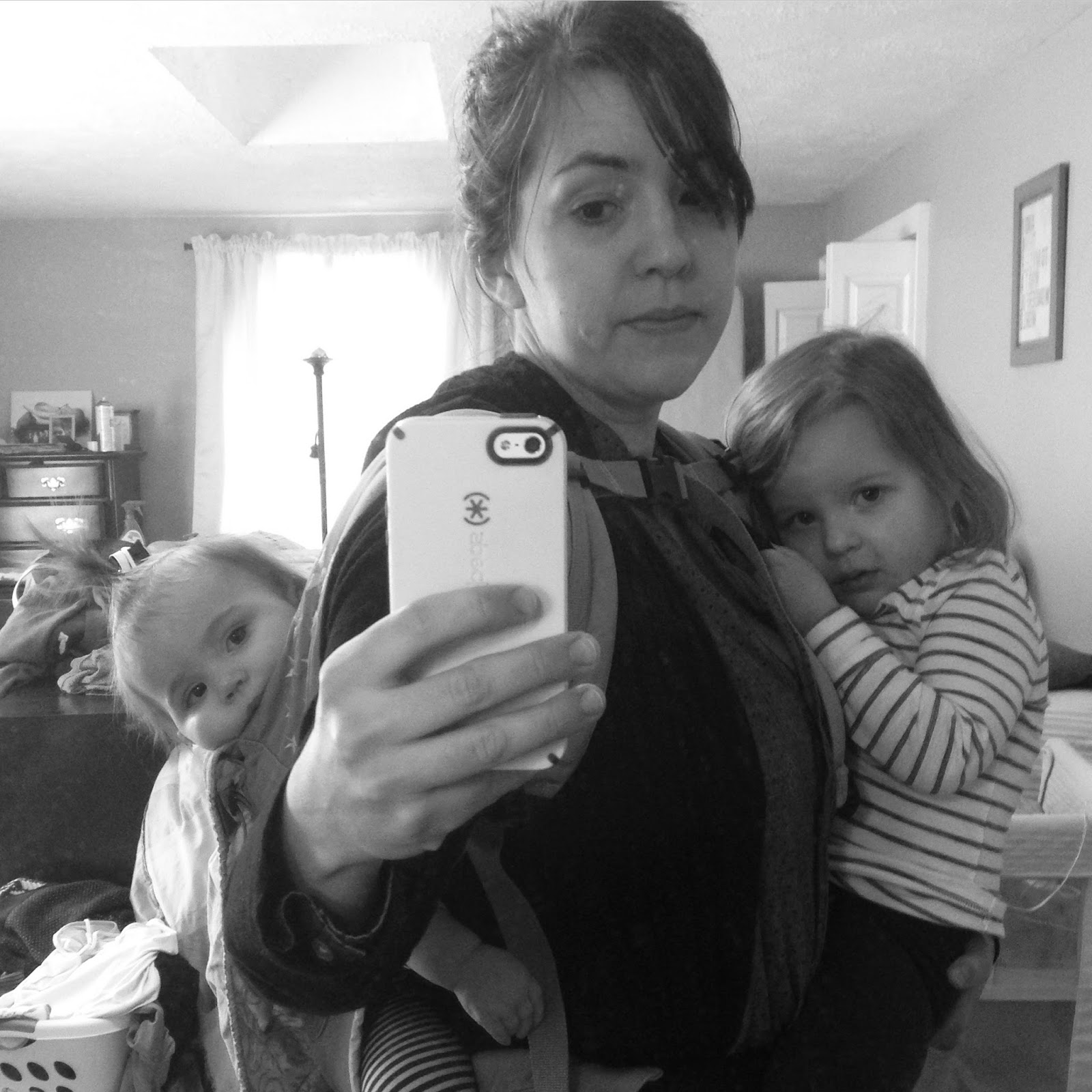 {I call this art piece Disheveled Mother With Her Sickly Young}
I don't remember how clean my own mother kept the house when I was sick as a child.  I don't know if she cooked elegant meals for the rest of the family downstairs when she was bringing me a piece of buttered toast in bed.  What I do remember is how soothing her hands felt on my forehead, how good it felt to sink into a freshly made bed after the sheets had been changed for me, and the calming sound of her voice as she reassured me that all would be well again soon.

I don't have very much to show for this flu and cold season in our lives, but I have two children whose noses shall go on being wiped and whose hair shall go on being smoothed and who shall know that they are deeply loved.  And perhaps that isn't such a small thing, after all.