the new job and the mid-year evaluation of life

Back in July, Nathan got a full-time job.

I put a period after that sentence to pretend like hey, no big deal, but actually...

Nathan got a full-time job!!!

But we also high-fived each other for having made it through seven-and-a-half years of marriage without either of us ever holding a full-time job with benefits.  Seven and a half years of freelancing and part-time jobs and self-employment and paying for our own insurance out of pocket, and you know what?  Life wasn't too shabby.  We had an apartment, then bought a house, then bought a second house.  We both got graduate degrees.  We had two kids.  We survived.  Maybe we even thrived at times.

But it was also hard, and particularly since he had lost a job he loved a year ago.  The last year for us was really, really hard sometimes.  The past year of Nathan's work situation involved him often being gone for 12-hour days, and then working from home whenever he was actually home.  Oh, and during that year I had hyperemesis again, this time with a toddler to keep up with while I puked, and a husband too busy to help much.

So when he was granted the position of full-time Director of Music at a large and wonderful church in Boston, we were pretty thrilled.  Life was going to be different.  Better.  Much better, probably.

Well, it's been a little hard to tell how much better it's going to be so far, because what with the attic renovation project, Nathan still kind of works all hours all the time.  But there have been glimpses.  Like already having a little bit more money and a little bit less freaking out, and having days where we get to spend time together as a family, and an evening here or there where Nathan helps with bath time and bedtime and all that good stuff.  Bliss, I'm telling you, pure bliss.

* * *
Well, back in January, I said goodbye to 2013, and wished for some specific things to happen in 2014.  The remarkable thing is, here we are eight months through the year and already there are so many good things to celebrate.  First and foremost is not the new job but the new baby, little miss Ree, so healthy and delightful.  Then there's the new job, a relief both in terms of our finances going forward and the time we'll get to spend together, all four of us.

I'm surviving being a mama of two, and loving it.

I wanted to work in my garden, and I even with a new baby I managed a lot of work on our front yard and got it looking downright presentable.

I wanted to sew more, and I have -- including two quilts for my girls!  {Nell's quilt // Marie's quilt}

Looking back at that New Year's post, I see that I wanted to do more house-fixing-up projects.  Little did I know that the brother-in-law would ask us to renovate our attic and turn it into an apartment for himself and his new bride, and a seven-month project would commence.  It's been crazy, but now that the work is nearly finished and they are living up there, it already feels so worth it.  It's a cozy little space with the vibe of a Manhattan studio apartment, exposed brick walls and sloping ceilings lending an old-building charm to it.  In any case, be careful what you wish for, because you might just get months of air compressors and nail guns and power tools filling your home when you say you want to fix up the place a little bit.

I wrote that I wanted to keep de-cluttering our home by selling things on eBay, and hoped for $1,000 worth of sales.  Well, here it is the end of August, and my total sales on eBay are now over $2,000, so I've officially sold more than $1,000 worth in 2014 so far.  Not really germane to this blog, and I have no intentions of turning this into a place where I document my eBaying successes, but if you have stuff you want to get rid of and you need to make a few bucks, I totally recommend it as a worthwhile venture.

* * *
As for the matter of the new job for this brilliant husband of mine, he was officially "installed" as the new music director this past Sunday, and we celebrated with brunch at a lovely restaurant just up the street from the church.  Nathan was even in a good enough mood to oblige with a "selfie" (an us-ie?  a two-sie?  a we-sie?). 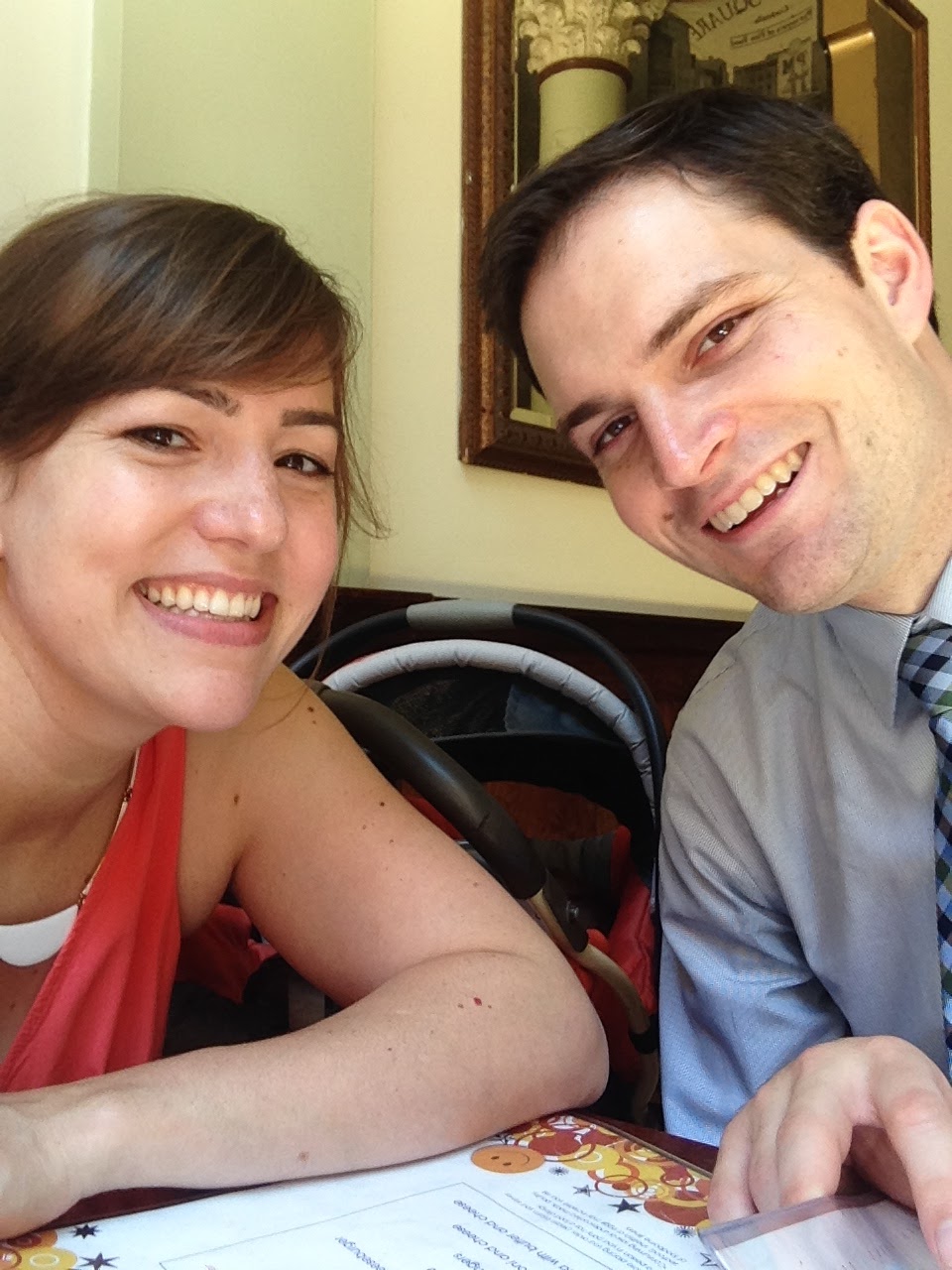 And in case this sounds like a lot of bragging about how not-too-horrible our life is right now, but don't worry -- I'm planning a post soon that will be full of pictures of just how, um, real our real life can be around here.