I made my own sourdough starter and started making bread from starter instead of granulated yeast.  I'm still working to find the perfect recipe, but I've been enjoying the process (and Nathan has been enjoying eating the results!).

{To tell the truth, my starter died during my four months of hyperemesis, so I need to make a new one and get back into my bread-baking habits.}

I started making my own kefir!  Another habit I need to get back into now that I'm feeling better.  Fortunately, my kefir grains fared much better during my sick months than my now-deceased sourdough starter.

I started getting organized about menu planning, and Nathan and I started making family dinners a priority -- despite our very different dietary choices.

Nell and I went to Virginia and Maryland to visit two good friends, and we had a wonderful time.

Nell started saying "Mama," only the beginning of a language explosion that has made her really able to communicate pretty well -- as long as I'm there to translate.

Nell went from being a picky eater (or really, a non-eater) to being overall a pretty terrific eater.

Nell turned one, and we had a party, and she loved it.

I turned 30, and Nathan outdid himself planning a surprise party for me.

I started selling stuff we didn't want / need on eBay, and made over $500 just getting rid of our stuff.

My brother-in-law got engaged!

His fiancee and I did six weeks of Shaun T's "Insanity" workout series, and thought we might die.  {I stopped when the pregnancy fatigue and morning sickness kicked in.  I know; I'm such a wimp.}

We took a vacation to Erie to visit Nathan's family, spent time at the beach, enjoyed time with family, and ate good food.

Nell started walking, and practically overnight, crawling became a thing of the past.

We found out that Baby #2 would be joining our family, and got to enjoy a couple of weeks of happy excitement before the hyperemesis hit and I moved into survival mode for several months.

Then we found out that my brother and sister-in-law are also expecting a baby... with the same exact due date!  So fun.

We had our first ever yard sale, which was a great success, and helped us de-clutter our house and basement considerably.

We had a summer CSA share from a nearby farm, and I loved the fresh produce and recipes that the food inspired me to try... that is, until the late summer and early fall weeks, when I became too sick to even be near food.

My youngest brother got engaged!

I made Nell an M&M costume for Halloween, in between dry heaving sessions.  She was adorable, of course.

We traveled to California for Thanksgiving and got to spend time with my family, which was wonderful.

I had my 20-week scan, and Nathan wanted to find out the baby's gender this time around, so we did!  And it's another girl!  We adore her already.

Nathan planned a service of lessons and carols for the church where he works, the first they've ever had there, and put together a 50-piece orchestra to join the choir in what was, really, a tremendous success and a beautiful and meaningful experience for everyone involved.  {Not that I'm biased or anything.}

Well, there was also the part where Nathan was unexpectedly "not re-hired" for a job he's had for the past six years, and couldn't get a straight answer or a real reason for the situation from anyone, and we were pretty discouraged about it.

On the bright side, he was offered a new part-time job teaching chorus and math at a private school, and we were so very grateful because a job is a job, and this has even turned out to be a job he enjoys.

On the not-so-bright side, the job is about an hour commute each way, and requires a lot of evening work grading papers etc. outside of his daytime work hours.  Combined with his other part-time job as a church musician, he worked pretty full days all fall, and then spent evenings immediately following dinner up in his office doing more work.  Until ten or eleven at night.  And there was a good amount of stress involved along with the crazy hours.  {Church work in particular seems to involve its share of stresses.}  And his work hours this year don't allow him to help with Nell during my work hours, which means more babysitter costs for us now.

There was also the not-so-good time when a student of mine's father kind of flipped out and got angry and aggressive with me over my policies and rates, and caused me a fair amount of professional and personal stress and sadness.

And then there was the not-so-good part of the year when family members we love dearly went through tremendous pain, which really put our little troubles in perspective, and we shared a small part of their grief.

So, I guess if I have wishes and hopes for 2014, pretty high on the list would be for some sort of full-time job to come along for Nathan that was the perfect fit for our family.  After 7 years of marriage {we just celebrated our anniversary!} and piecing together multiple jobs between the two of us the whole while, we're grateful for what life has brought our way but so ready for something a little more... Normal.  Stable.  Mortgage-paying.  Maybe even something that involved benefits?  Vacation time?  Yeah, that.

As for myself, I want to start the book club I've been meaning to start, and thus force myself to actually read some books this year.  I want to sew more, garden more {I've been eyeing this book!}, learn to use my camera better, and maybe start soaking and sprouting my grains, even though I still find the whole controversy over grains kind of confusing.  I want us to explore more places in New England, to find more time to spend fixing up this old house of ours, and to cultivate friendships both old and new.  I want to clean out more of the stuff we don't need, and sell $1,000 worth on eBay.  I want to give birth to a healthy baby and somehow survive and even enjoy the early days of figuring out how to care for an infant and a toddler, even though sometimes I'm a little terrified about it. 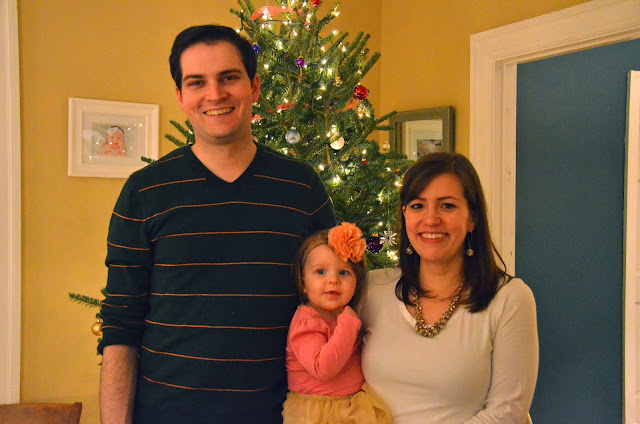