Bad Day For This Caterpillar

You may conclude from the flurry of posts this evening that either I finally uploaded a bunch of garden pictures from my phone to the computer, or that I'm avoiding studying for grad school placement exams.

Hmm - maybe a little of both.

While I was tending my tomato plants this afternoon, I found something that blew my mind. It's going to blow yours, too. (Unless everyone but myself is already familiar with this phenomenon!)

This delightful creature is commonly known as a "Tobacco Hornworm," (not to be confused with a tomato hornworm, which is pretty similar) although it's actually a caterpillar, not a worm.

The "horn" part of its name comes, no doubt, from the spike sticking out of its butt. 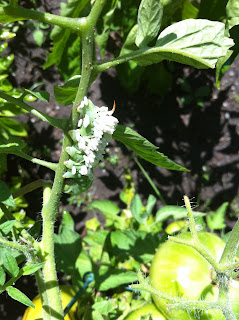 Oh, and those white things all over his body? Apparently (thanks, Google, for knowing what I meant when I typed in "caterpillar with white things on its back") they are the cocoons of tiny parasitoid wasps.

An adult female wasp uses her ovipositor to deposit her eggs under the skin of an unfortunate caterpillar. The eggs hatch, and the larvae feed off of the hornworm's body until they're ready to chew through the caterpillar's skin to the outside world. There, still attached to their host, they pupate, spinning the little cocoons you see that look like grains of rice. Soon after the grown wasps emerge from their cocoons, the hornworm - having been gradually eaten alive - will die.

So this caterpillar I found? He's had some bad luck lately. 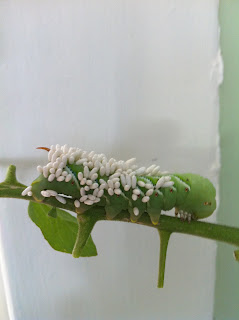 I brought him inside and put him in a jar so I could watch the remainder of his demise with morbid curiosity - and a little bit of a sympathy. I figured being in a mason jar couldn't really be worse than being stung by a wasp, having eggs hatch inside his body, being eaten alive by larvae, being kept on as a host until no longer needed, and finally, being left to die.
Poor caterpillar. I actually feel sorry for him.
Sometimes nature is so weird and grotesque it really blows my mind.

Email ThisBlogThis!Share to TwitterShare to FacebookShare to Pinterest
Labels: garden