This morning I had an MRI. I had never had an MRI before, so it was fascinating to me to be slid into the tunnel and hear all the (extremely loud) buzzes, chirps, and whistles while the machine took images of my brain. After about ten minutes of lying there, the technicians slid me out to inject contrast dye into my veins before more pictures were taken.

Now, every time anyone has to stick a needle in me, he or she tells me how my veins are so small and fragile and evasive and generally difficult to stick. Today was no exception, but at least the guy doing the stabbing was humorous! After needling my right arm and digging around this way and that for a while, he gave up and tried my left arm. With this one, before inserting the needle he slapped his hand on the inside of my arm several times. He grinned at me and said, "I've seen them do this on ER. Let's see if it works!" I replied, "Is that how you received all your medical training?" "No," he answered, "I also watch House."

The other notable part of my trip to the Magnetic Resonance Imaging Center was that I got to wear scrubs, and I discovered that they are quite comfy.

Now I have in my possession a CD with dozens of images of my brain, which I get to keep forever. Cool! I think I will post one of the pictures so you can all see what I look like. Ha-ha. 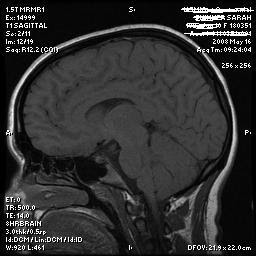 Now I ask you, doesn't that brain look large and powerful? Yes?