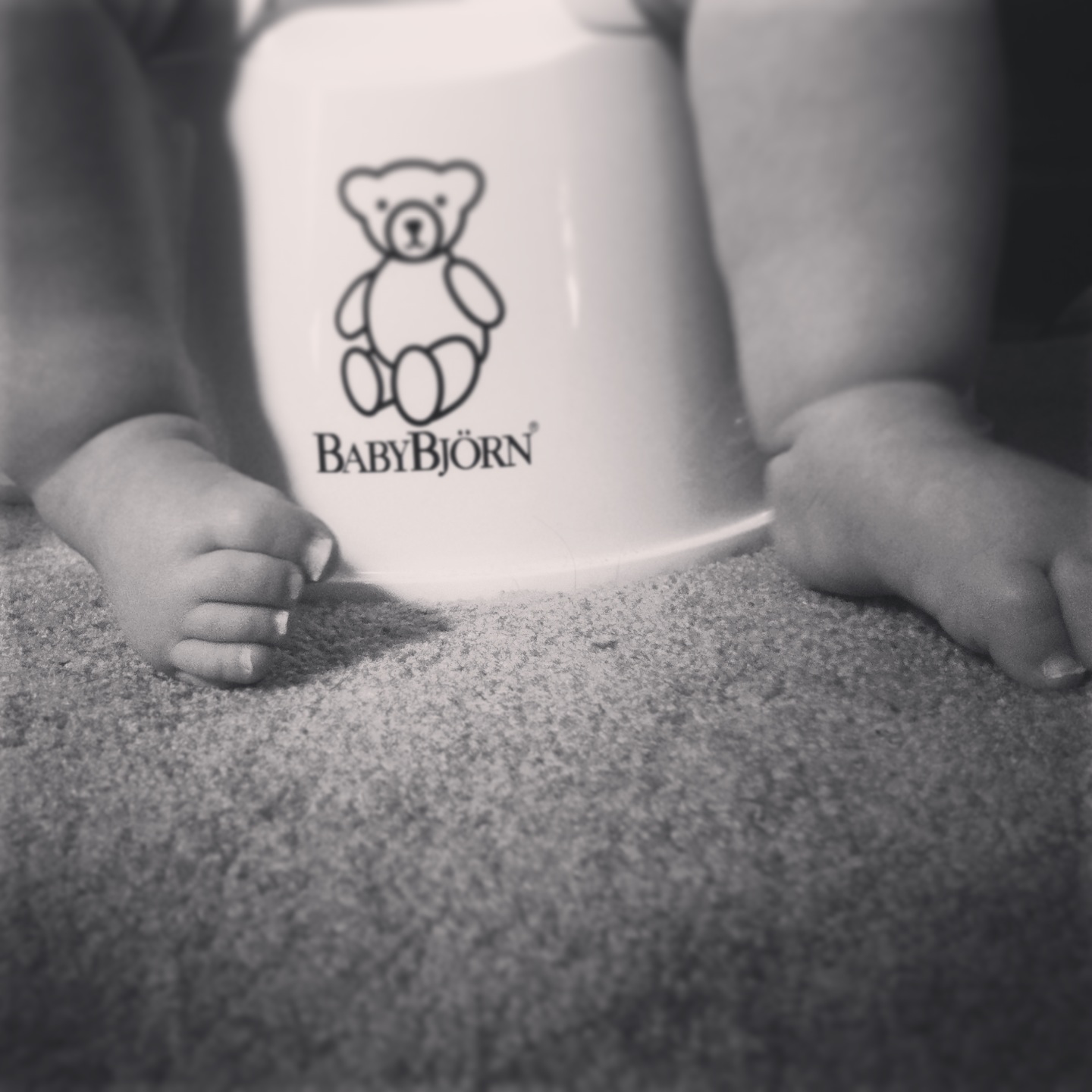 We started EC -- Elimination Communication -- with our older daughter, now 2.5, when she was about eight months old.  At that time, I got a lot of questions about it from friends and acquaintances, and I always meant to write about what we were doing, but somehow never managed to do it.

Our second babe is now almost six months old, and while I've been doing a little EC with her from time to time since she was born, I started being more consistent about it this week.  The results are already so noticeable!  I'm sure you can find info about EC all over the vast worldwide web, but I wanted to share our own experiences with this practice.  So here it is: the long-awaited EC blog post.

* * *
I think I first came across the whole concept of EC during my pregnancy with Nell.  It felt, to me, a combination of intriguing and overwhelming.  Then, I distinctly remember a conversation with my husband and my brother-in-law after one of her earliest diaper blow-outs, where I mentioned the practice and tried to explain it to them.  Both of them, grossed-out {to put it indelicately} by the incident they had just witnessed, loudly and enthusiastically endorsed the practice.  "Why wouldn't you try it?  Why on earth not?" and so on and so forth.

{Perhaps this is where I insert a disclaimer about how my children are perfect and delicate little flowers, are infinitely ladylike, and don't actually poop.  Just for posterity, you know.}

Well, as a first-time mom, taking care of a baby in a somewhat mainstream way already seemed overwhelming enough, and somehow the months went by and I never actually tried it.

Fast-forward to when Nell was about eight months old.  My friend Melissa had just had a baby, and was trying EC with her newborn.  She would tell me about their little successes, and within a few days, I was convinced: I had to try it, too.  I suppose that when your friend is doing something and you can hear it from a real live person's mouth instead of a book or website, it seems easier.  And really, it is easy!  So much easier and more normal than I would have thought.

* * *
So, I ordered Nell a little Baby Bjorn Potty Chair

and eagerly waited for it to arrive.

Once the potty was established in a place of honor in a corner of our living room, I started by offering her potty opportunities when she first woke in the morning, and when she woke from naps.

"Do you want to go pee in the potty, Nell?", I would ask, and then I would make a "Sssssss" sound.  And if/when she peed, I made the "Ssssss" sound again as she went.

I've forgotten now, but I think she must have peed on her potty the first or second time I offered it.  It was just the encouragement I needed to keep going.

Before long, she was often keeping her {cloth} diapers dry in between using the potty.

And possibly the best benefit for this cloth-diapering mama, by the time she was actually interested in eating solids and had the accompanying change in bowel habits, all her poops were on the potty.  Yep.  I never had to deal with a diaper sprayer or anything like that.  Just wet diapers over here from about nine months onward.  {She was late to the game in having any interest in solids whatsoever.} 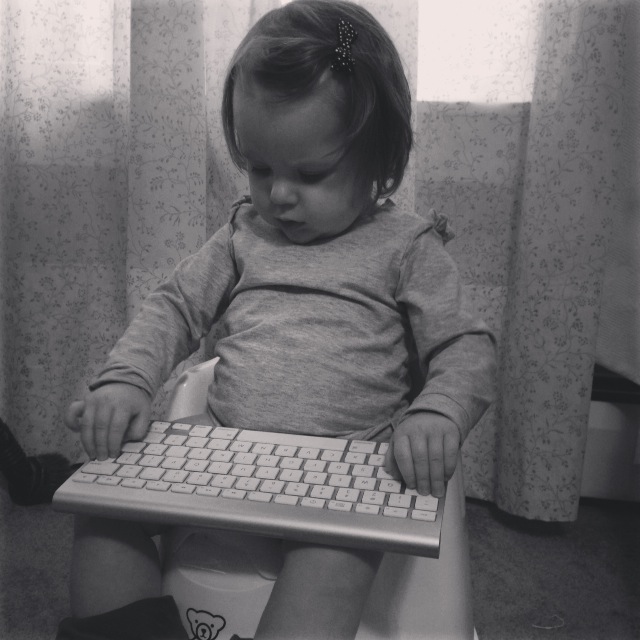 We were definitely doing pretty well, often just using one or two diapers during the course of the day, and by the time Nell was eighteen months or a bit younger she would say, "pot" {her word for potty} when she needed to use the potty or wanted her diaper changed.

Unfortunately, having hyperemesis gravidarum again during my pregnancy with Marie derailed the whole EC thing a bit, and during the time that I was too sick to handle cloth diaper laundry there were also days when I was too sick to manage getting her to the potty frequently.  She wore disposables.  And peed in them frequently.  {Poops were still in the potty, though!  Always!}

All was not lost, however.  Once I felt better, we got back to using the potty at least a couple of times a day.  Then, when Ree was two weeks old (and Nell had just turned two), I decided that Nell was probably ready to be fully "potty-trained."

We tried it for a day.  It was not going well.  I was perplexed.  It wasn't what I expected of my EC girlie.  I put it on hold.  After all, having a new baby sister is a pretty big adjustment.

I tried again one week later.  Easy-peasy this time.  Virtually no accidents.  Underwear!  Fun and exciting!  Nell had maybe two accidents in the house over the course of a week, and one while playing outside with the hose water one day.  And that was pretty much it!

* * *
So here we are, doing it again with little miss Marie, who is now almost six months old.  She's sitting with pretty good stability these days, so at the beginning of this week I pulled the Baby Bjorn potty up from the basement and washed it out for her.  Spurred on by a recent bit of information I read about the inherent difficulties of getting solid poops out of cloth diapers, I decided it was time to get serious about doing this again.  Maybe it would work and maybe it wouldn't, but I would offer Ree chances on the potty just as I had done with Nell.

I've been offering her the potty at waking times {not night wakings; please people, I'm not that dedicated!}, at diaper changes, before baths, and occasionally in between if we're home and it's convenient.

The first day, Ree wasn't so sure about sitting on the potty, as she was used to being held over it, her back against my tummy as I held her little legs.  By that afternoon, though, she had the hang of it and peed sitting down.  The following day, she did three pees on the potty.  The third day it was at least four.  Today in addition to success upon wakings, there were a couple of occasions where she seemed a little fussy, I checked her diaper to find it dry, and she then went on the potty.  At diaper changes where her diaper was wet, I offered her the potty and it was clear that she would try to go at those times, even if it was just a small amount.

I can't help adding the completely pointless but utterly charming fact that, after peeing on the potty, "I smile at her and say, "Ree!  Does that feel better than having a wet diaper?" and she grins up at me, oh so pleased with herself.

* * *
Doing EC worked pretty well with Nell.  Nathan quickly became on board with the whole idea, too, and overall we felt it worked really well for our family.  We were glad we gave it a try and stayed with it -- even though we didn't do it "perfectly" or 100% consistently, it made a real difference.  But maybe it was just Nell, a niggling voice in my head said.  Maybe she just took to it well, and other babies wouldn't.

While it's still early to declare any sort of wild success with Babe #2 around here, I think it is fair to say that the principles of EC really do work.  I just think that children - even babies - are quite smart, and can quickly show a preference for using a toilet if it is offered to them rather than wetting or soiling a diaper.  And if you have the kind of lifestyle where you can be home with your babies enough to offer them this chance -- even somewhat infrequently, even just once or twice a day -- you may be surprised by how they respond.

Definite Pros of EC:
I think a big thing in favor of practicing EC, even part-time, is that the toilet will never be something new or scary to an EC baby.  Baby will never remember a time of not using the potty.  Hopefully this eliminates or reduces resistance to the idea, the developing of controlling tendencies in reaction to toilet learning, etc.  Using the potty is just normal.

Fewer diapers.  When baby stays dry, just put the dry diaper back on after using the potty!  {Note: cloth diapers will go off and on endlessly; disposables will lose their stickiness on the tabs after a few times.} Fewer disposable diapers means saving money and the environment.  If you're cloth diapering, you'll extend the life of your diapers with less laundering needed.

A more comfortable baby with less wetness and less opportunity for rash.

A chance to connect with your baby about one of many daily caregiving opportunities.  I am a big believer in giving my kids my full attention as much as possible during bathing, changing, potty, dressing, and feeding times.  At other times I encourage them to engage in independent activities, but caregiving, when I am at my best anyway, gets my undivided attention.  {This is based not only on my intuition, but also influenced by Magda Gerber's approach and by Janet Lansbury, a wonderful parenting resource.}

Potential Cons of EC:
Baby might fuss when wanting to use potty. {Then again, most babies will fuss for a wet diaper, anyway.}

Baby might wake when wanting to use potty?  I was never sure if this was happening with Nell or not, but occasionally had my suspicions.  A legitimate fear for any parent, I get that.  We don't want our babes waking any more than they already do!

If you cloth diaper, you might find yourself with smaller diaper laundry loads.  Don't forget to wash them every 2-3 days anyway.  Don't let them fester for a week just because your pail isn't full and you still have plenty of clean ones in your stash.  Wash them anyway.  And throw in towels to bring your laundry-to-water ratio where you want it.
* * *
I hope my children don't hate me someday for writing this post.  Nell and Marie, I love you girls so, and I came across this method of toilet-learning and thought it just seemed as though it might be a little nicer for all parties concerned than solely using diapers.  And it's worked so well for us that I wanted to share what I know with friends who have asked.

And with the whole internet.
{Interested in learning more about EC?  Comment or email me with questions!  And Diaper Free Baby is a great resource.}