Ah, second children.  They don't get baby books, the stereotypes go, they don't get as many photos taken, and you may not even notice them reaching all those little baby milestones.

Of course, I didn't do a baby book for Nell either.  Just thinking ahead, so future children wouldn't feel gypped.

I jotted down all these little memories two months ago, snapped some pictures, and am just now getting around to blogging it... voila! 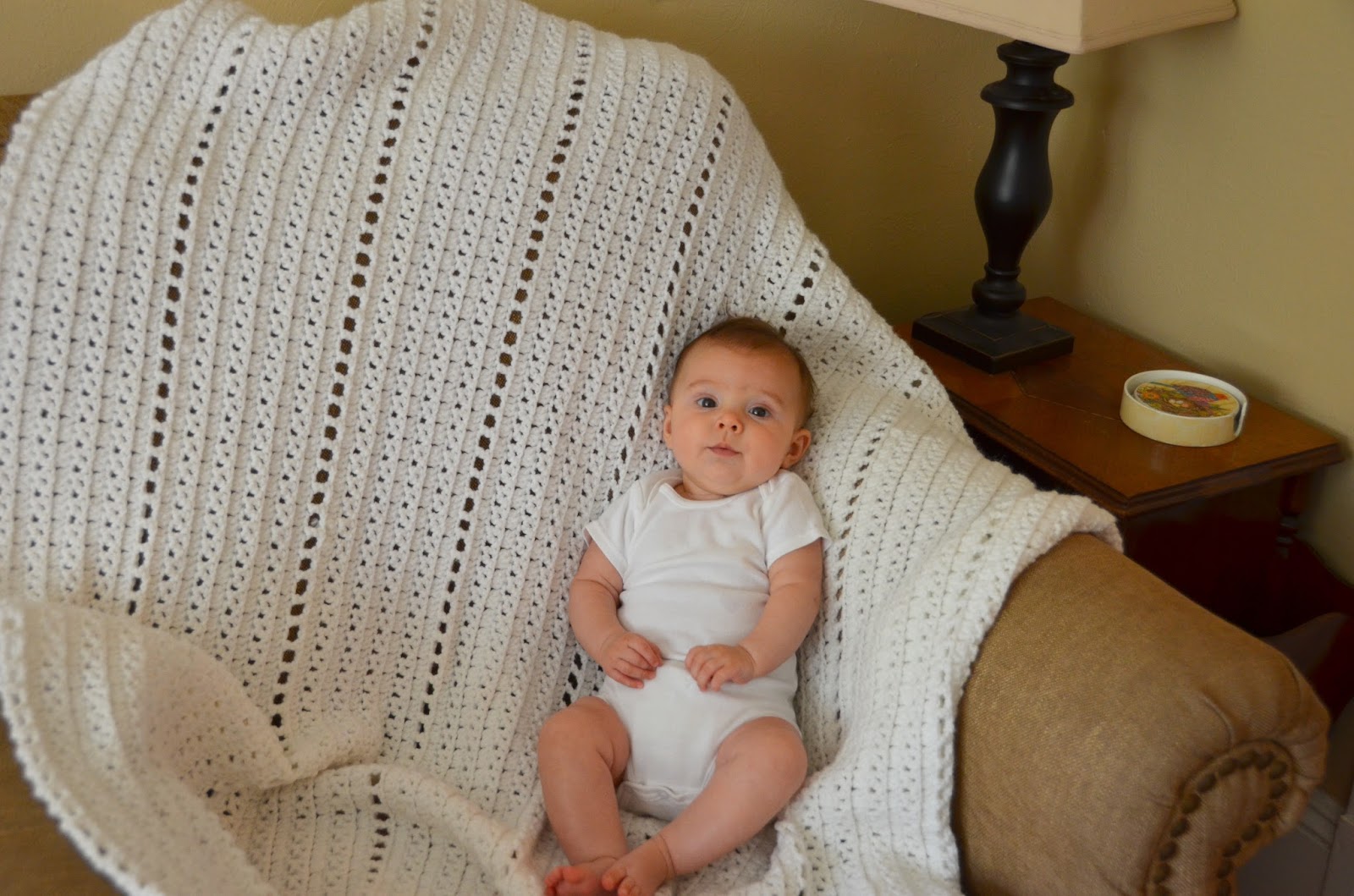 At three months this little cutie started finding her hands, and usually had her fingers in her mouth - three or four at a time.  And she drooled a lot.  Oh, did she ever drool.

She became quite complacent for diaper changes, clothing changes, and even baths.  Less screaming, more contentedness, her first chortle, and smiles!  SO. MANY. SMILES.  Big, dopey, open-mouthed grins with drool streaming out.  Really, is there anything better in all the world? 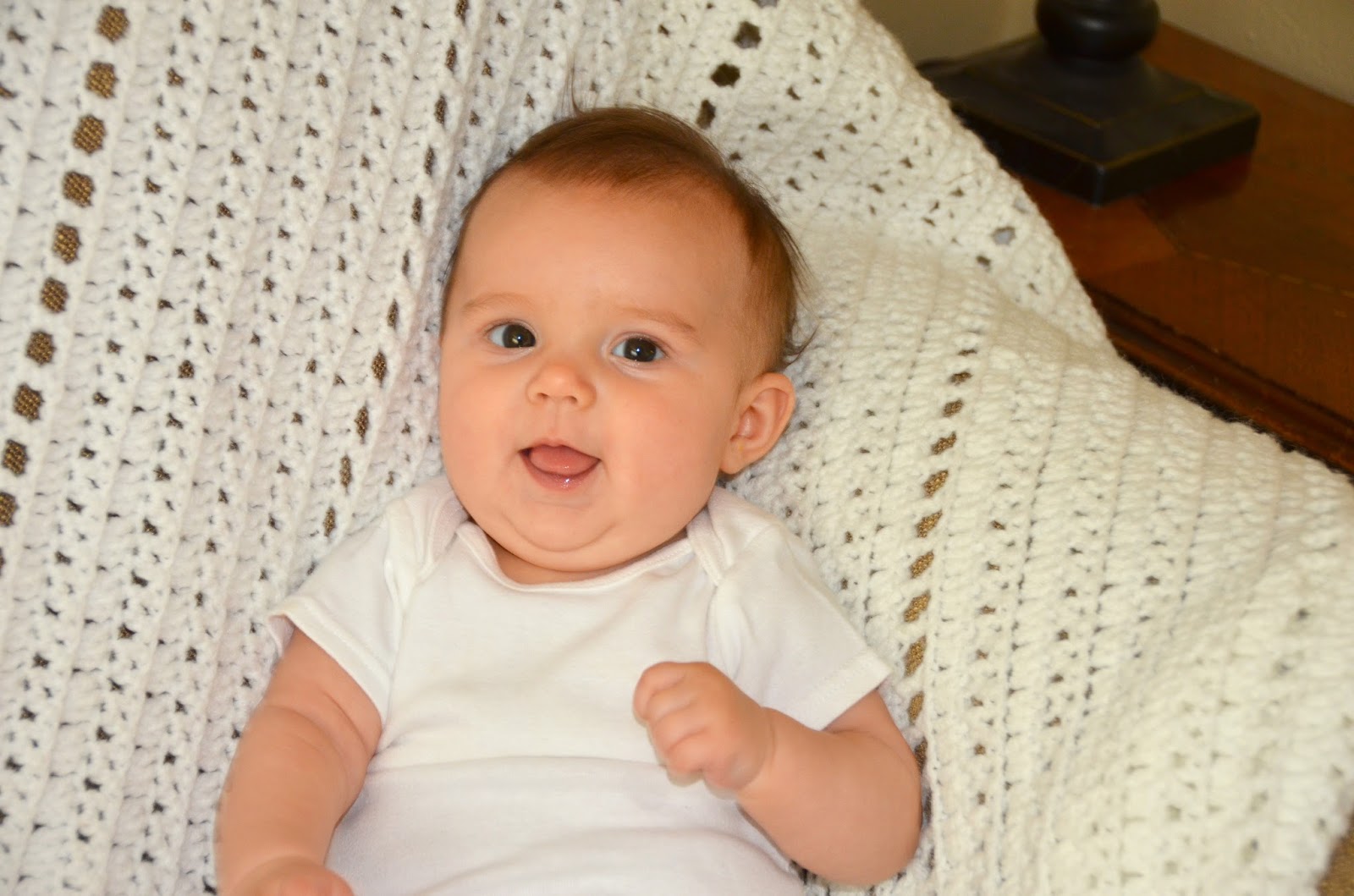 {Naturally, she didn't grace my photo shoot with any magnificent smiles, but she did allow this small one to slip in.}

She started sitting in her swing and her bouncy chair pretty happily at times, or would lie on the floor content to watch the chaos unfold around her.

Both my babies always got lots of comments about being strong for their ages, holding their heads up well, and being very alert.  Maybe people say that about all babies?  In any case, by three months Nathan would hold Ree up horizontally, and she would hold her head up high, keeping her body straight, while Nell shrieked with glee, "Baby Wee airplane!  Baby Wee airplane!" and Nathan would oblige with a small and gentle zooming around.

I spent some quality time worrying that Ree would be the underprivileged one, since - due to the tyranny of everyday life - she seemed to get less snuggle time and babywearing time than Nell did at that age.  Oh, she still got her fair share, but since she has shown a preference for being swaddled and in a quiet room for her naps, and that frankly makes my life easier, she has fewer Ergo naps than Nell did.  I wish I had more time to snuggle with her, but I also think we'll both survive.  She even appears well-adjusted so far.

Speaking of sleep, at three months Ree was going to sleep around 7 pm, and sometimes sleeping as long as 9 hrs at night without waking!  I know, don't hate me.  No, really -- don't -- because she's not doing that anymore, anyway.  Sleep and babies is such an ever-changing phenomenon as they grow.  I remember with Nell that she became a more predictable sleep-through-the-nighter around the age of two, sooo... in another year and a half or thereabouts, I should be able to count on getting a good night's sleep again.  Keep your eye on the prize, Sarah.

Also, word to the wise, if you tell someone your baby is a pretty good sleeper, said baby will undoubtedly wake up at least three times the following night.

I started getting the hang of putting Marie down for naps with a big sister in the next room, keeping one ear open for Nell's activities while nursing the baby down on all the times when she wasn't inclined to fall asleep without some mama time.  Yes, it really was all getting easier by three months, and the things that seemed impossibly difficult at one month started to seem downright mundane by three.

Marie was solidly into her 3-6 month clothes by 3 months, with even some of those getting a little small on her.  She's a long one, this girlie.  She gets it from me.  KIDDING.  She gets it from her 6'3" father, not her 5'4" mother.

Want to know what she gets from me?  The world's longest tongue: 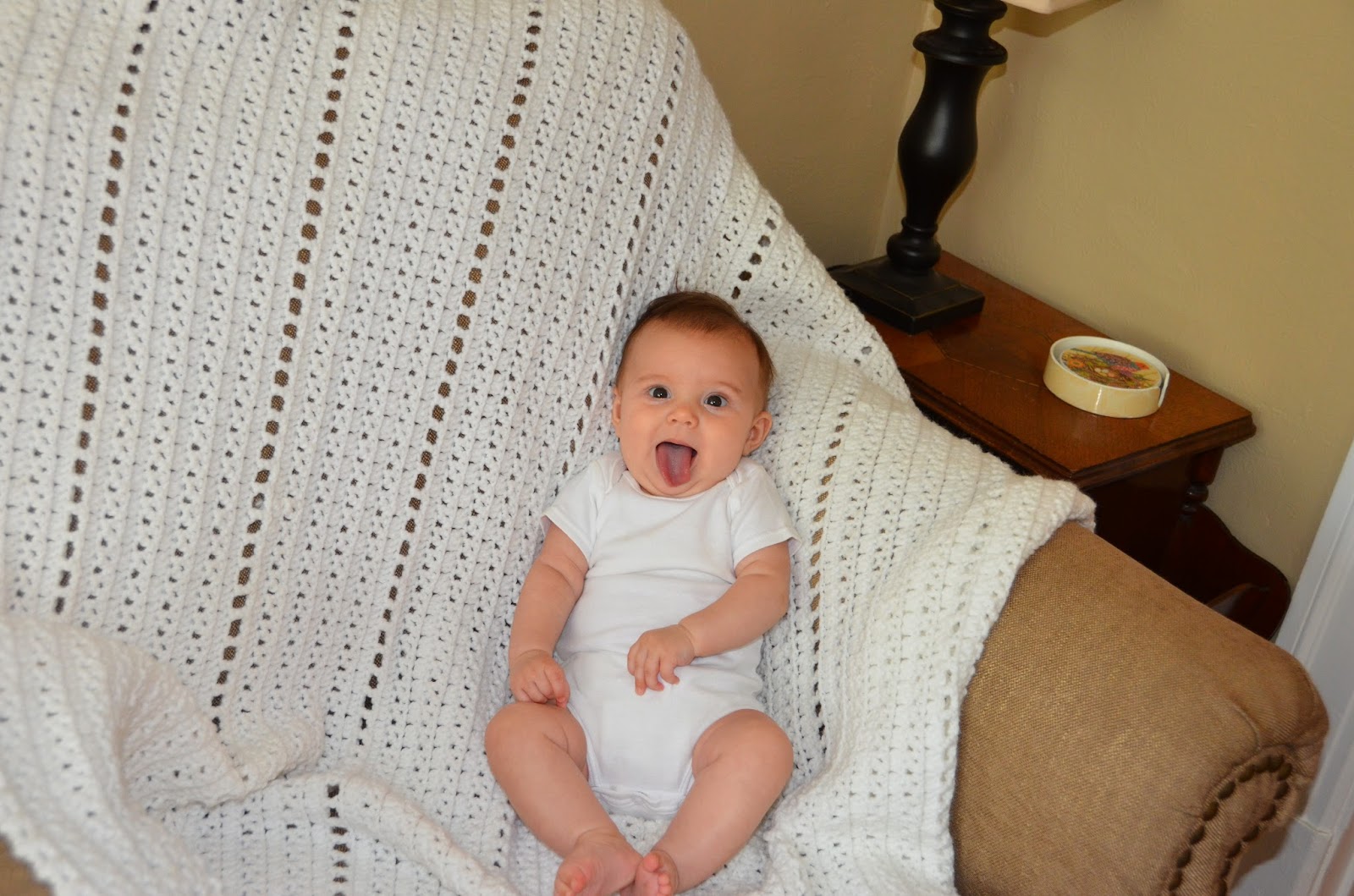 From an early age, this babe was a bit burpy and gassy and fussy and had a particular pterodactyl-esque scream she reserved for those moments of extreme discomfort.  I gave up dairy for a while and it seemed to help noticeably, but around three months seemed to be able to have a bit of half-and-half in my coffee without adverse results.  Thank you, God, for coffee and for cream.
And that was Ree at three months.
* * *
Nell wanted to be in some pictures, too.
She was very intent that baby Ree ought to hold her hand: 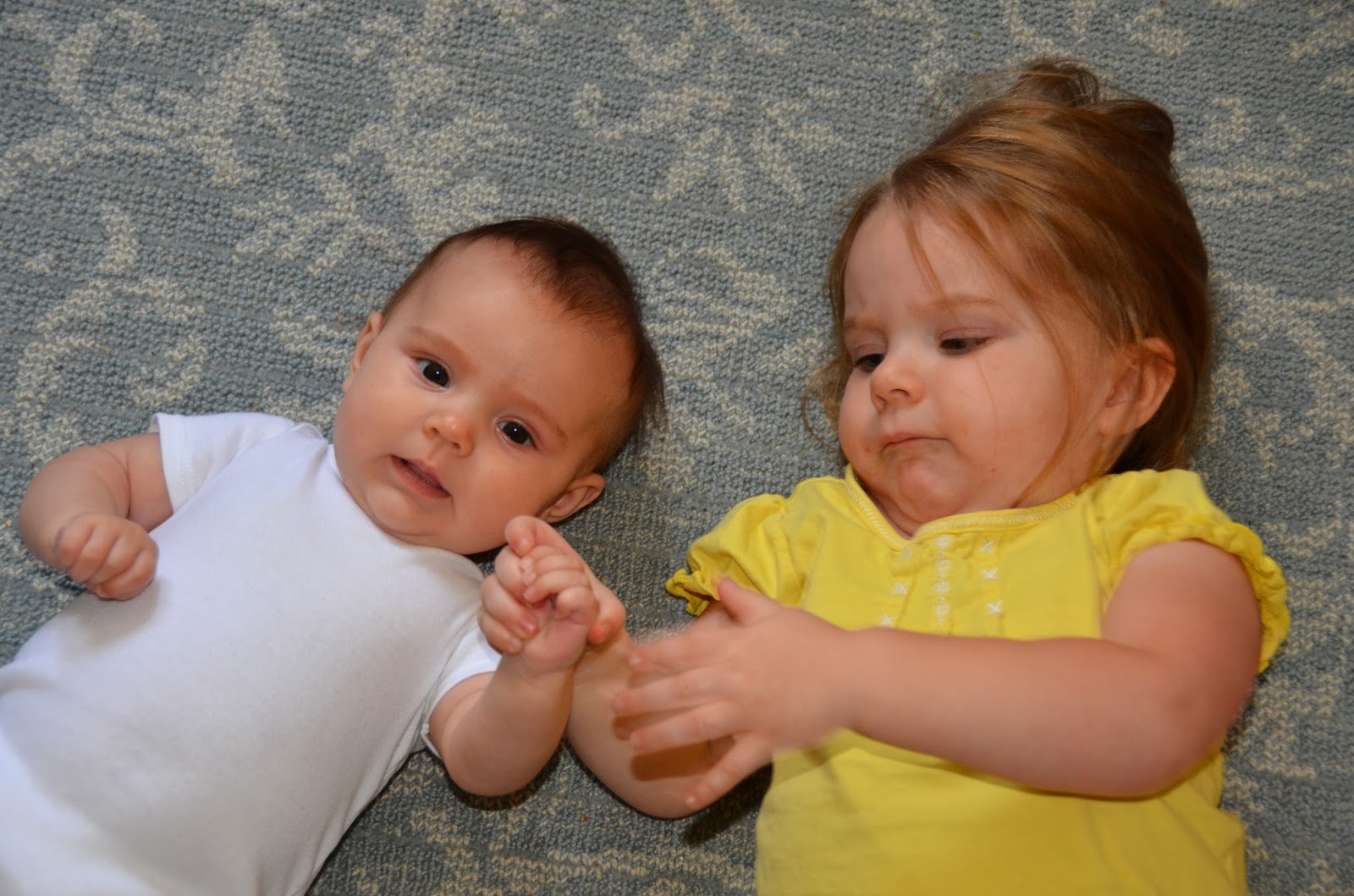 Success!  And pretty smug about it. 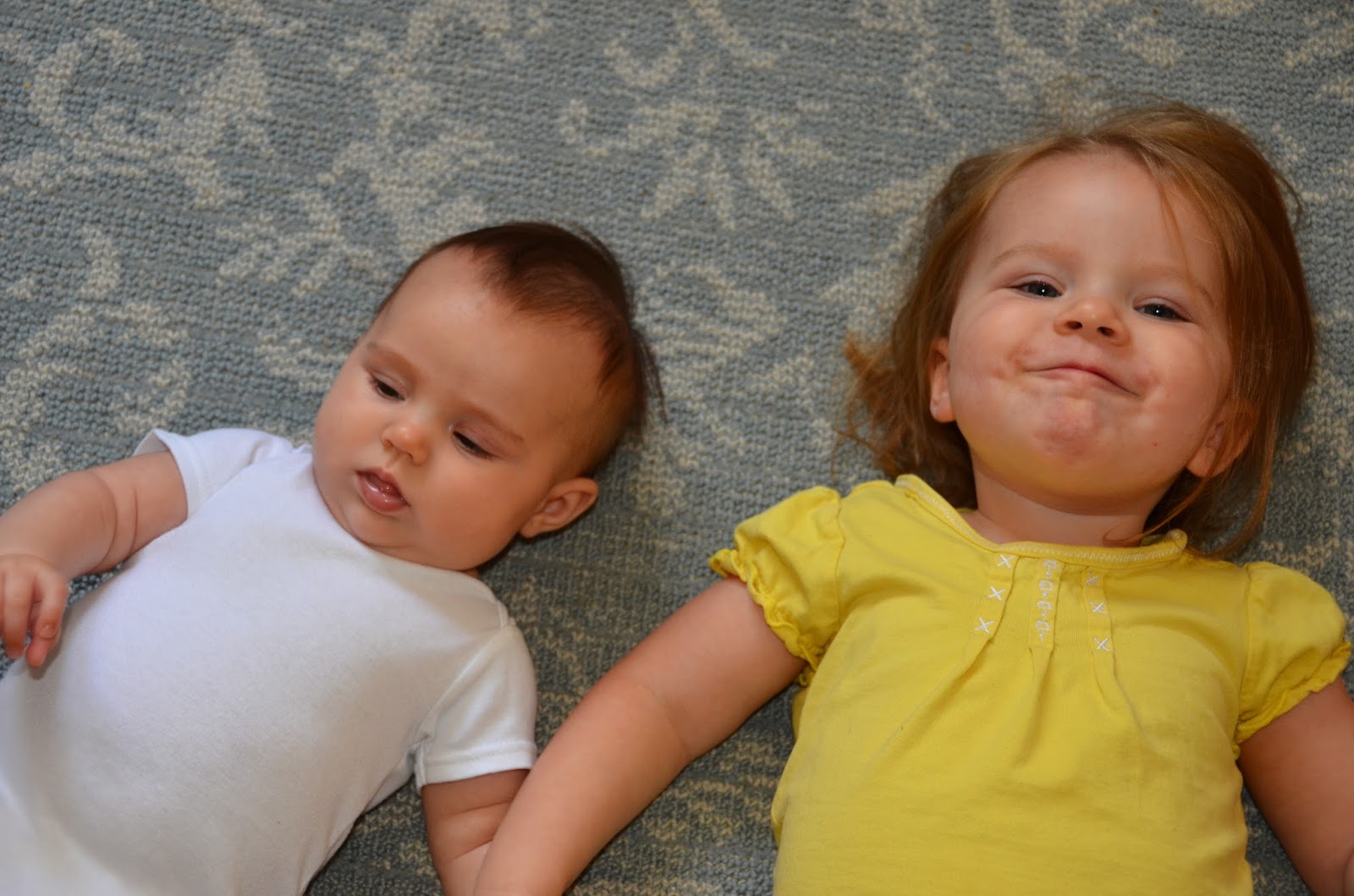 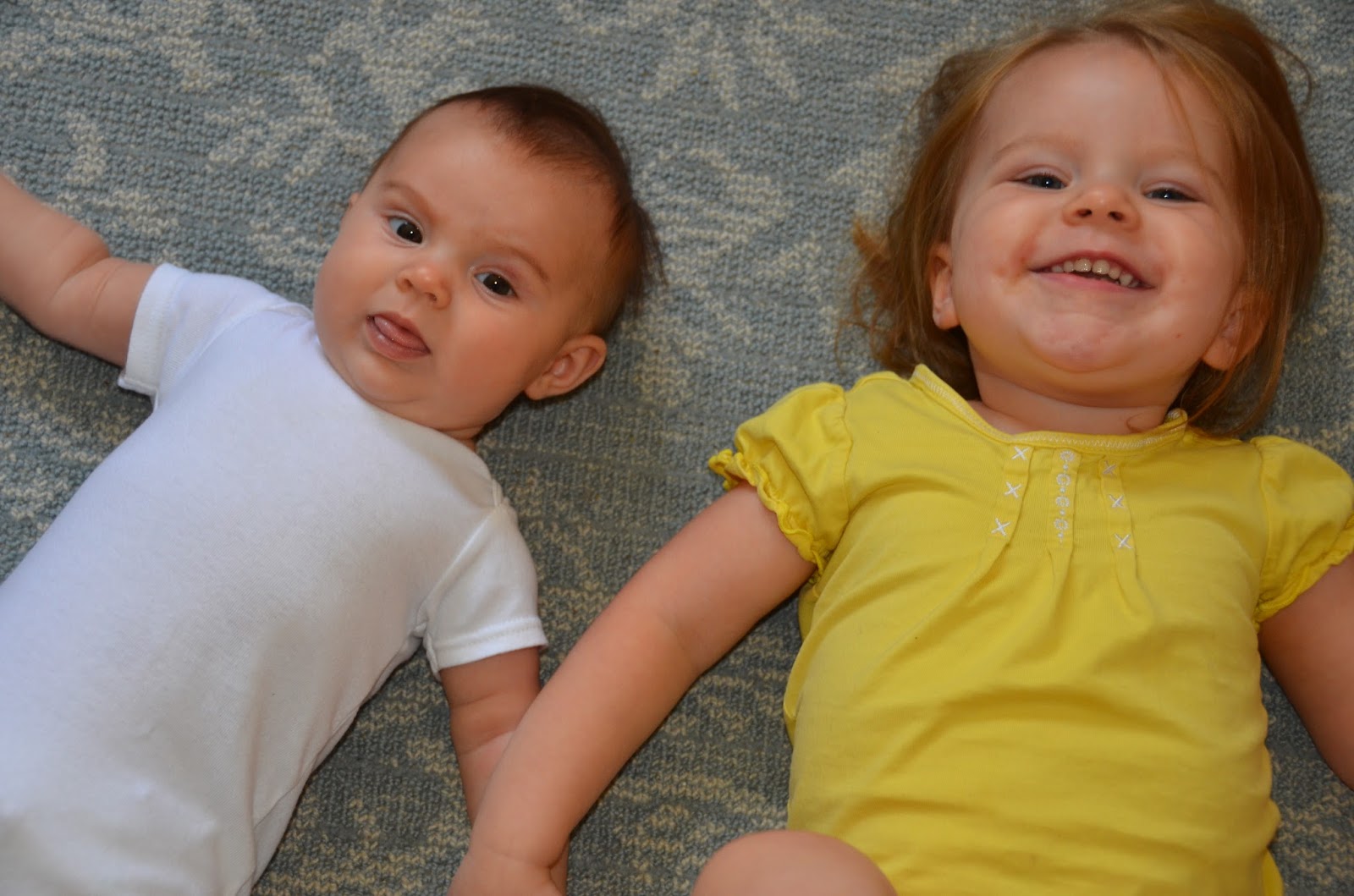