Everyone hates being sick.  It's awful.  All you want to do is lie in bed, moan a little for dramatic effect, and watch movies when you're not sleeping.
Then you have a baby and you get sick.  But no one else is going to keep that baby alive and cared for if you don't do it, so you adapt your standards of motherhood and just focus on keeping the two of you alive.
Then your baby gets sick, too.  And the two of you just lie in bed, day after endless day, trying to survive it.  And it feels like it will never end.
That's the kind of fog we were living in for almost three weeks over here.   I got sick towards the end of April and finally felt better just in time for Mother's Day.  Nell is still finishing out her round of (sadly quite necessary) antibiotics.  My first symptom was, oddly enough, almost completely losing my voice.  Then a low-grade fever, and a rash on my face, neck, and arms.  A cough that would not quit, that kept me up night after night when I just could not stop coughing.  The kind of cough that leaves you dizzy.  And finally, a sore throat bad enough to make me actually go to the doctor.  (Unheard of.)  The physician's assistant took a look at me, worn out from two weeks of coughing and sleepless nights caring for a fevered little one, and wrote me a prescription for antibiotics.  Said it was almost certain to be a sinus infection at that point.
(Those antibiotics were magical, by the way.  I literally felt better in a day.)
Poor Nell came down with a fever and spent four days vomiting while I was timing nursing sessions of fifteen to twenty seconds, seeing what she could keep down.  She was really so sad and pathetic, a limp, exhausted little baby that just wanted to sleep constantly, slumped against my chest.  Then she got a double ear infection.  And then broke out in a rash from head to toe.  And then got conjunctivitis in both eyes.  And somewhere along the way, her fever went down, leaving her with enough energy to properly complain about her circumstances, loudly and frequently.
I sat up many a night in bed, holding her upright so she could have some relief from the pain in her ears and sleep comfortably.
I felt like this picture aptly captured the misery of my sick baby - caught mid-cough, one eye crusted shut, a rash on her cheeks. 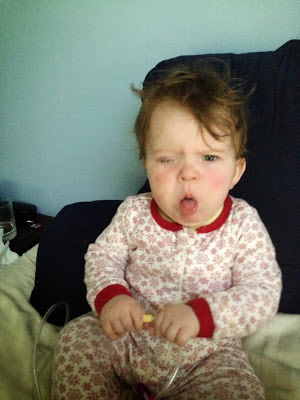 With all this going on, is it any wonder that my blog has been lying here in cyberspace rather neglected?
But I have things to blog about, oh, I do.  Things like an eleven-month-old Nell, a trip to Maryland and Virginia, sourdough bread, gardening, Mother's Day, making Nell a Waldorf blanket doll, and Nell's first birthday!  Stay tuned.