Still behind.  Always behind.  And not just in Nell's monthly posts -- in pretty much every aspect of my life.  Can't get ahead.  Will life always be like this?
I am behind on work emails, studio recital planning, dishes, and laundry, but sitting down and looking back at the pictures I took when Nell turned eleven months old was somehow relaxing.  Useful or productive?  Probably not.  Mood-boosting?  Definitely.
Just look at a few of the many faces of this girl: 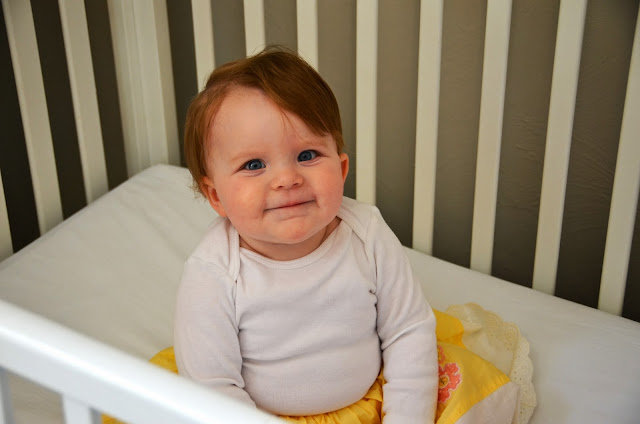 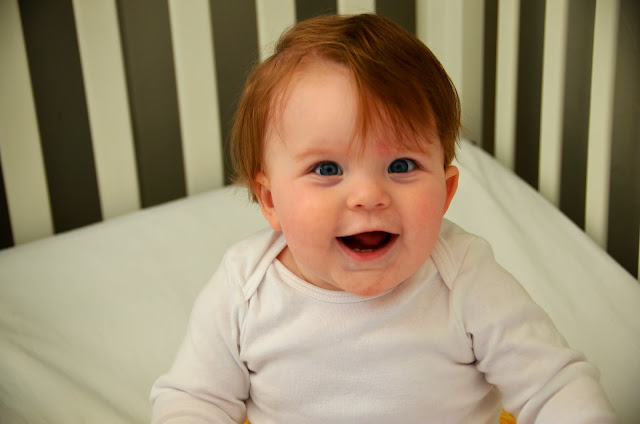 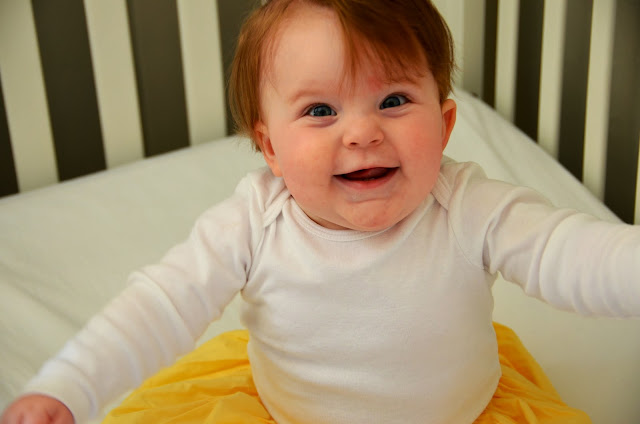 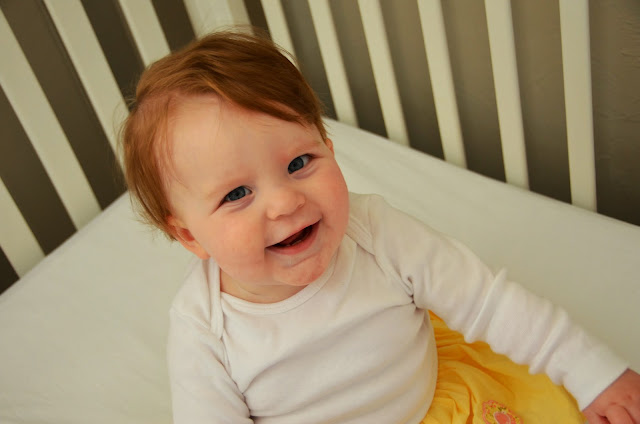 Well, back when Nell turned eleven months old, she suddenly became a happier baby than she had been at ten months old.  Ten months seems so long ago already that I can't quite remember what it was that made that time seem difficult.  Maybe it was the two top teeth that emerged between ten and eleven months.  Maybe it was just a developmental thing.  Whatever the cause, she just wasn't quite happy.  She fussed a lot.  It made me feel like fussing a lot.  (Haha.)  Instead, I said to myself, "This too shall pass," and what do you know, it did. 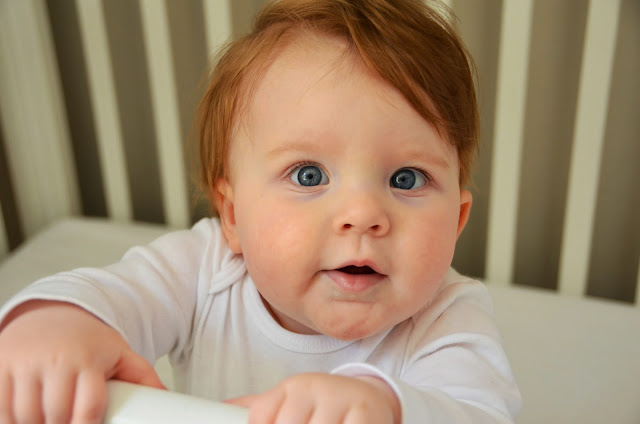 Nell learned to scoot around very intentionally and get to what she wanted, and I think that helped alleviate her frustrations with life.

She began sliding her wooden shapes with holes in them on and off of their pegs with surprising precision and dexterity.  I was impressed.
Sitting in church one day, Nell clapped her hands together for the first time, something she figured out all on her own.  (Her silly mother plays pattycake using her feet instead of her hands, so I had never really showed her how to clap, I guess.)  She looked up at me with absolute delight at her discovery, and continued clapping for the rest of the day.  She was downright gleeful.  In no time at all, she figured out how to clap when she heard or saw other people clapping, or any time she heard me say, "Yay!" 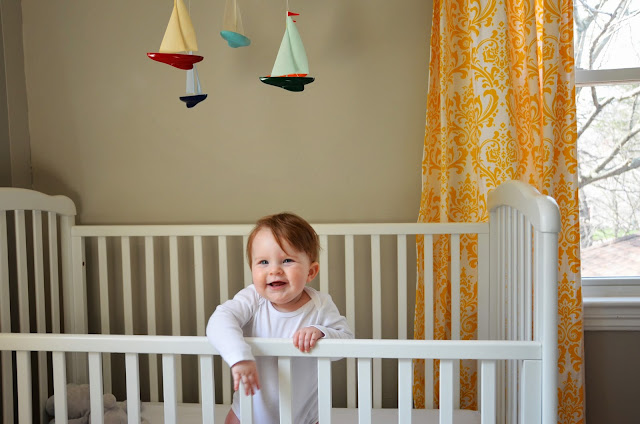 Nell continued to determine that all food wasn't abhorrent, and became particularly fond of my homemade yogurt with banana and frozen blueberries stirred into it.  In fact, she started eating pretty much anything I was eating.  Black beans, green peas, raspberries, corn, tomato, hummus, avocado, carrots, green beans, cheese, and more.  I think this girl is going to be a good eater after all!  I felt kind of proud of myself for persevering in patiently offering her healthy foods, all while nursing her practically like a newborn until she was ready to eat solid foods.
Fortified by her newfound acceptance of foods, no doubt, Nell perfected her waving technique: 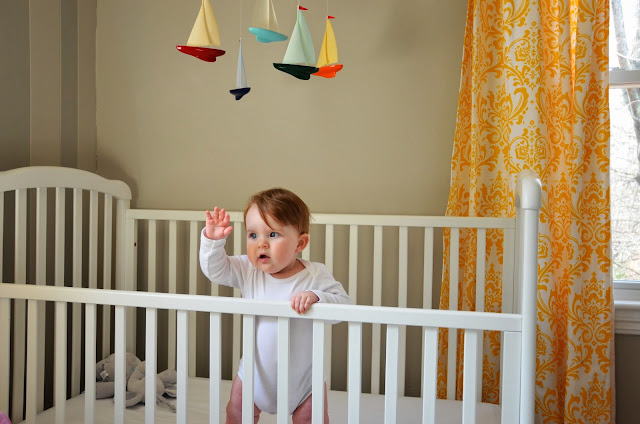 And she learned to give kisses!  Well, loosely defined, anyway.  When I hold Nell close and exclaim, "Kisses!", she will give me an open-mouthed slobber on the cheek, which I say totally counts as a baby kiss.  I love it. 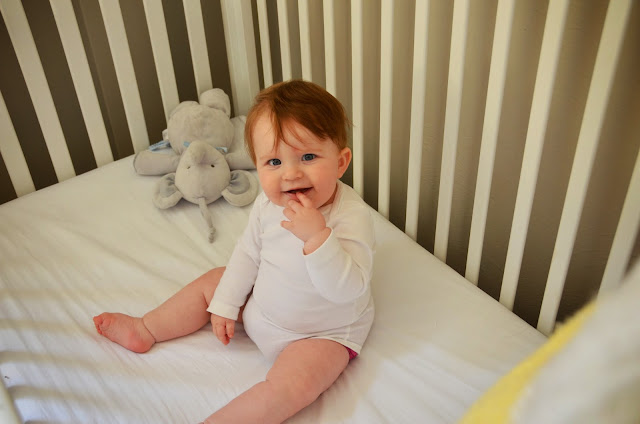 "Dadada" continued to be her most-uttered syllables, with the addition of a new variant: "Duh-nuh."  It crossed my mind to wonder if she might be trying to say, "done," a word she certainly hears frequently enough and might try to repeat. 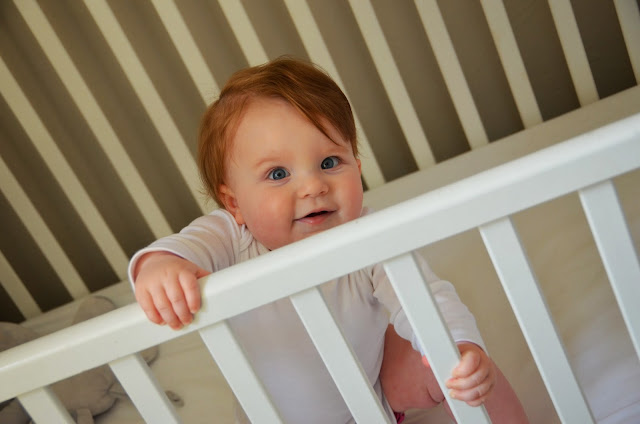 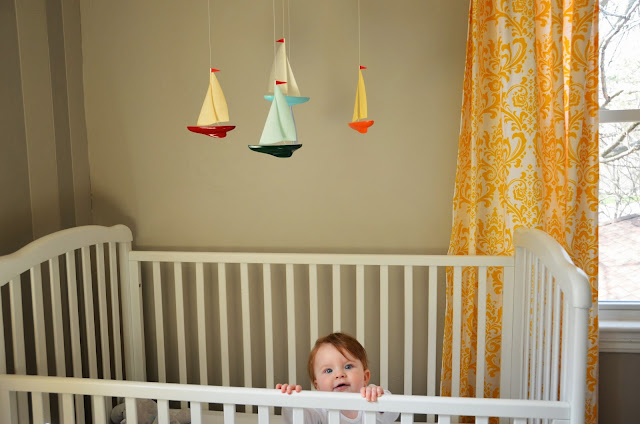 Her fake coughing diminished in frequency.  I think I'm going to miss it when she stops doing it altogether. 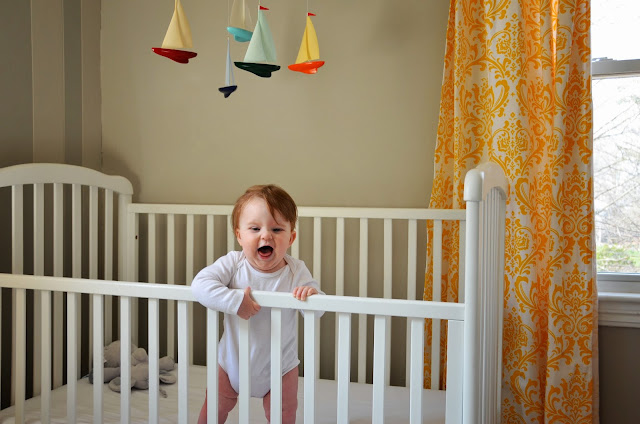 {At least I'll have pictures to remember it by.}
Her method of scooting around made us laugh - one foot folded in front of her, and the other one behind her, she propelled herself surprisingly quickly and effectively, her hands slapping the floor in unison as she pulled herself forward. 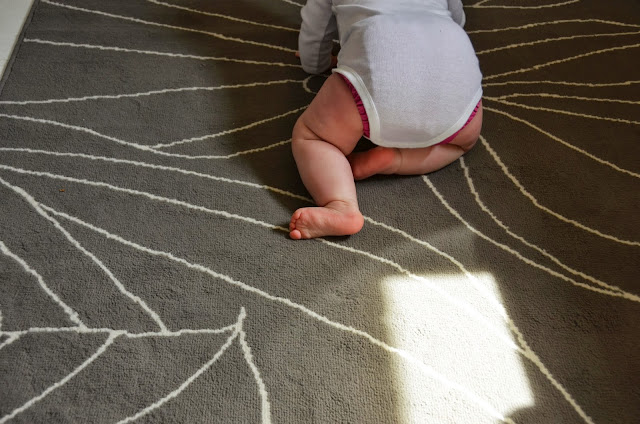 And she's off.
Dear Ellen,
Everyone tells me that once babies are scooting, crawling, cruising, toddling, they begin to lose their baby chub.  We love to see you move and explore, but I'm not ready for those dimpled hands, those rubber band-like wrists, and those thigh rolls to vanish quite yet.  I just... you... words can't...
You.  Are.  Scrumptious.
Stay my chubby wubby baby a little bit longer, please?
Lovelovelove,
Mom 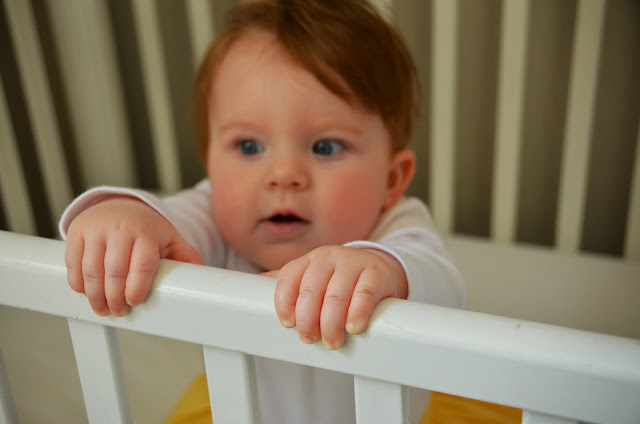