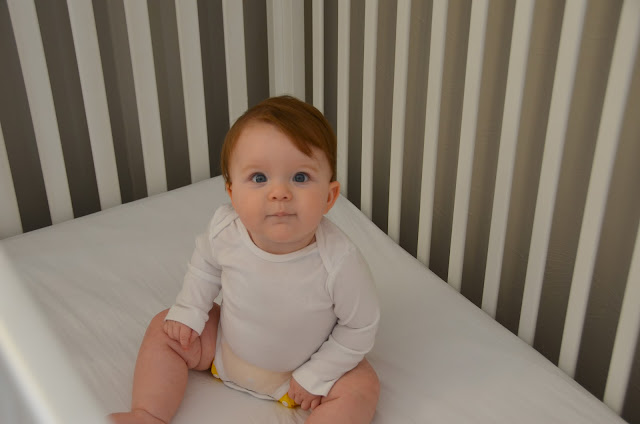 I figured I should finally write Nell's nine month post since, ahem, she's ten months old as of today.  It's important to keep up with the monthly updates, after all, so that any future children we may have can have something to complain about when I don't keep chronicling their lives with the same frequency.

Note: I actually did take the pictures and start writing this post when she turned nine months old, it just didn't get finished until now.  All the things she's "currently" doing actually apply to nine months.

Nine months.  On the outside for about as long as she was on the inside!  When it comes to losing pregnancy weight, everyone says, "Nine months up, nine months down."  So naturally I woke up on Nell's nine-month birthday and said to Nathan ominously before going to hop on the scale, "It's the day of judgment..."

One pound.  Still one pesky pound over my pre-pregnancy weight.

{Also, my pre-pregnancy weight was nothing to write home about, so... le sigh.}

Meanwhile, Nell's weight, if not mine, is fair game to be broadcast across the internet, and at nine months she was weighing in around 22 lbs of sweetness, chub, and kissability. 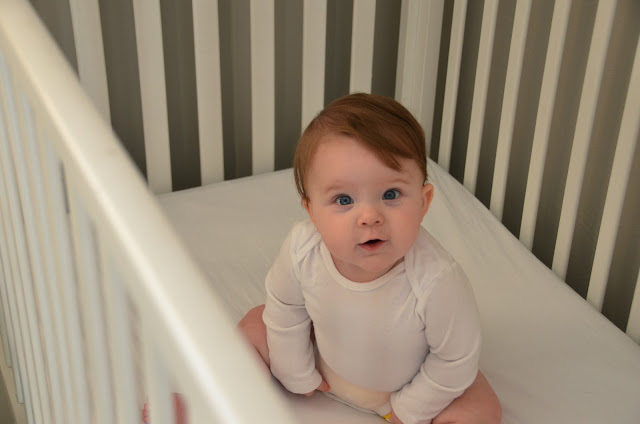 At her nine month checkup, which actually took place when she was about eight and a half months, her doctor asked if she was working on developing a pincer grasp.  Oh, she already had that down.  If someone has tracked the smallest pine needle into the house, Nell will scoot around and find it, picking it up carefully between thumb and forefinger.  Each tiny bit of dust is fair game.  Suffice it to say, she's putting my {dubious} housekeeping abilities on trial.

Nell and I have a little game we like to play these days.  She coughs, and I pretend-cough back at her.  She pretend-coughs, smiles, waits.  I cough.  She coughs.  Etc.  She is downright gleeful about this game, and while it originated in response to an actual cough, now that she's figured out how to fake-cough, she can initiate a round of this game any time she wants to.  In fact, she decided to play at her doctor's appointment, and even 'invited' him to play, too.  She coughed, I coughed.  She coughed, I coughed.  She turned, looked at Dr. L., coughed, smiled, waited.  He was quite impressed with her little game!  And yes, he coughed back.

Aside from her regular wellness visit, Nell and I also took another trip to the doctor recently, when she unexpectedly vomited six times within about a half an hour.  The latter five of these were fluorescent yellow bile.  While I'm usually not the sort of person to run to the doctor's office for every little thing, Nell is my first baby, and I found myself a little disconcerted.  By the time we got to the doctor's office, she hadn't vomited any more, and they couldn't find a thing wrong with her, so that little incident will remain a mystery.  Poor thing though, she was sad and confused by the whole thing, and spent the afternoon a bit subdued and very snuggle-prone. 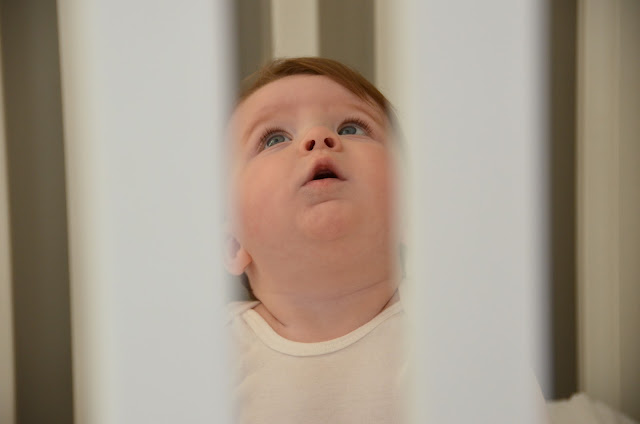 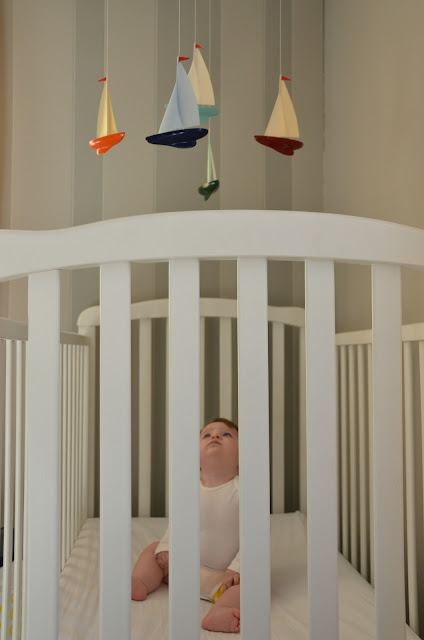 Nell has figured out how to put things into other things, and consequently, spends a lot of her play time putting smaller objects into her biggest stacking cups, taking them out again, rinse and repeat.

Nell can scoot herself around a fair amount now, and will regularly end up three or four feet away from where I set her down on a rug or blanket to play.  She's not crawling yet, but she wants to!  She always gets one foot stuck in front of her.  I think once she figures out how to navigate that, and get up on her knees, she'll be off to the races.

She's recently started to "share" her pacifier with me, or, as I said to Nathan, "Look, Nell's offering me a drag on her binky."  I perceive this as her first act of generosity - and perhaps even love? - and it warms my heart when she wakes from a nap, takes her pacifier out of her mouth, and holds it up to my mouth.

On the opposite end of her personality spectrum, this same little girl who sweetly offers me a "taste" of all the things she loves to put in her mouth also threw her first tantrum just a few days before she turned nine months old.  The reason for the tantrum?  I had a tortilla chip in my hand, and she wanted it, but alas, could not have it.  I explained that it was salty, had sharp corners and edges, etc., and removed it from sight, offering something in its stead, but too late - Nell could not be pacified.  Angry screaming and back-arching ensued and lasted for several minutes.  I admit that I was not ready for this to happen so soon, and the whole experience was a little upsetting and overwhelming for me.

Ironically, despite what The Tortilla Chip Incident might indicate, she still hates and refuses pretty much all foods, with the occasional exception of a bite or two of egg yolk or a nibble on a slice of avocado.  Most offers elicit extreme shuddering and gagging.  I'm trying not to get ahead of myself and start worrying that she's inherited her father's extreme picky eating habits.  For now, I just keep patiently offering, but not forcing.  Hopefully she'll come around. 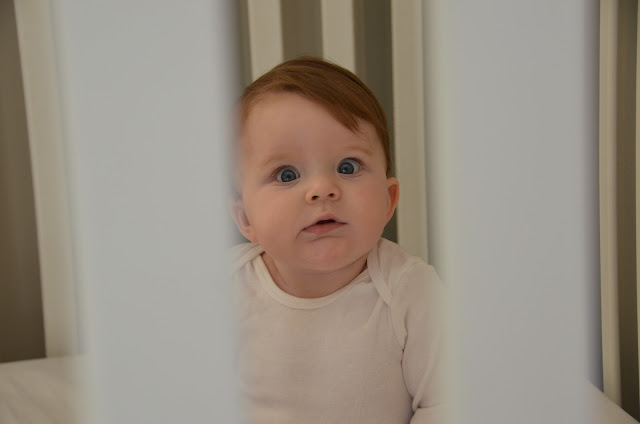 Nell has an extensive vocabulary of sounds, her favorite of which is "da da da da da da da."  Along with the frequent babbles, though, she can also employ a real humdinger of a shriek.  She shrieks when she's happy, she shrieks when she sees something that interests her, she shrieks when she wants something.  She's in no way trying to be 'naughty;' these are definitely the shrieks of an excited or intrigued little girl exploring her world (and her vocal range), but nonetheless, they are ear-splitting and a wee bit uncomfortable since it's usually my ears being split.  We're hoping that the excitement for life continues, but that this phase is otherwise short-lived.

In the list of things that probably only a parent notices or cares about, sometime between eight and nine months Nathan and I noticed that Nell whipped out an altogether new look for herself.  She now frequently employs the funniest little straight-mouthed smile.  Such a goofy girl, this one. 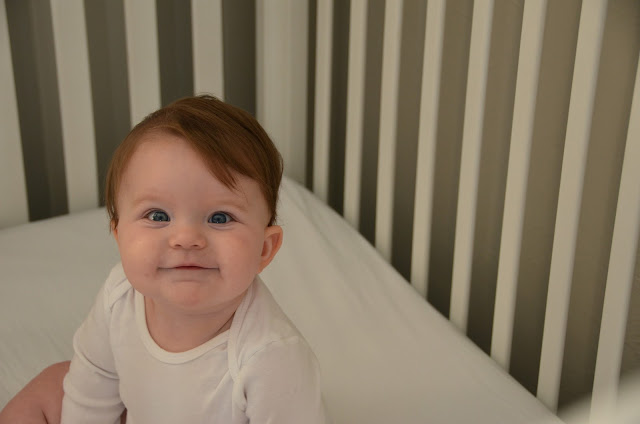 I think the tortilla chip tantrum will forever be emblazoned in my memory.  I suspect that you have a bit of a spitfire in you beneath those big round eyes and sweet chubby cheeks, and this was only the beginning of things to come.  You are growing up quickly, as babies seem to do, and learning what you want.  You are rapidly becoming your own little person.  I just hope this growing up process isn't too painful for any of us involved.  I'm excited to see the kind of person you become: what you love, what you're passionate about, what you want out of life.  I know you'll find bigger and better things to invest yourself in than tortilla chips. 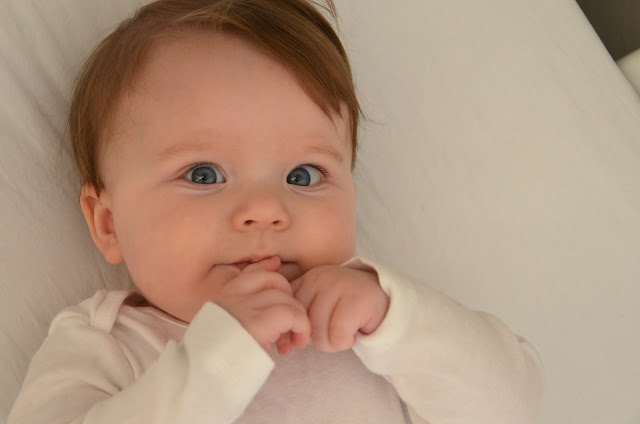