I've been so behind on blogging things this summer.  It might have something to do with how frequently my lap is occupied by my daughter instead of my laptop.  Hmm... not a bad thing at all.
~ ~ ~
Nell was baptized this summer.
I grew up in a church tradition where infant baptism was not practiced.  In fact, I probably viewed it - like the idea of the Eucharist as anything more than purely symbolic - as a specifically Catholic practice, some "silly" notion that baptism imparted salvation to babies.  (Of course, Catholic practices are frowned upon by most evangelicals as meaningless and misinformed rituals, right?  Thank you, protestant Christian curricula, for imparting the belief that the Church was utterly lost until the Reformation saved the day.)
In my adult life, I've come to view the practice entirely differently, and Nathan and I knew we wanted our baby baptized into the church.  After Nell was born, taking the baptism class at our church only made us more convinced and even excited about it.  I left that class so inspired and assured about the whole thing, while also having the weight of the responsibility of parenthood duly impressed upon me.
Fr. Brian, the priest who baptized Nell, had sort of gotten a gleam in his eye at baptism class and said, "I'd love to dunk her!"  We were quite agreeable to the idea, so Nell - along with Alexandra, the baby of another choir member - was dunked, while the third baby being baptized that morning was sprinkled.
We were so glad to have not only our church family there, but also Nathan's family, and many of our friends from other churches, who came that day to support us as we renounced Satan, the world, and sin, and affirmed our trust in Jesus.
Technically you're not supposed to take pictures.  But a dear friend of mine took a few 'illegal' photos, nonetheless.
Action shot! 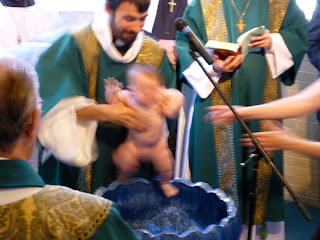 Nell had been really soundly asleep until right before the baptism, despite my best efforts to wake her so the water wouldn't come as a literal rude awakening.  We did manage to get her half awake just in time, but still, she was none too pleased with the baptism itself, and squawked a little.
She calmed right down afterwards, though. 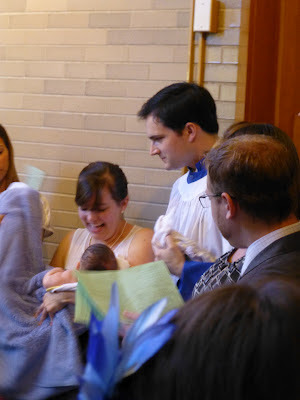 {Nathan is wearing a cassock and cotta because he was the substitute organist that day.}
Nell was perfectly quiet for her chrismation: 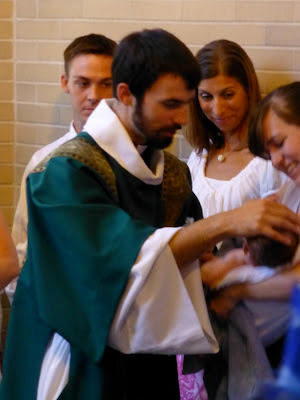 We hastily put a diaper on her, and then clothed her in the baptism gown I had bought for her from Little LuLu's Sewing on Etsy.  I liked this dress because it was simple, and child-like, and not super frilly... just a pretty cotton eyelet white dress.
I combed her long hair so it would dry looking respectable, while Nathan held the candle they give each newly baptized, from the Church of the Nativity in Bethlehem. 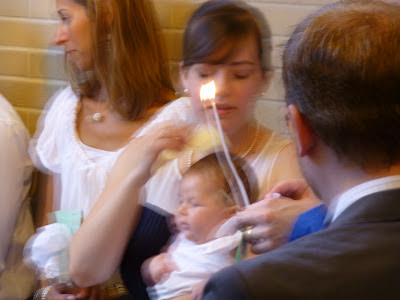 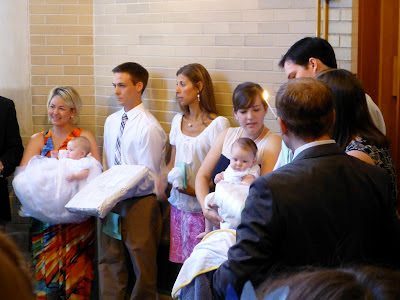 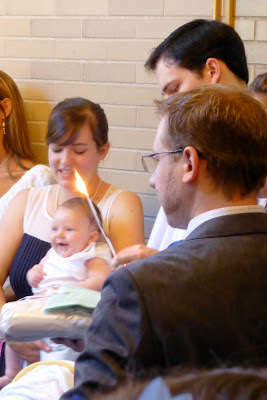 After the church service concluded, we took some photos.  Our church doesn't have the best lighting for pictures, but we did the best we could.
The newly baptized, received into the household of God: 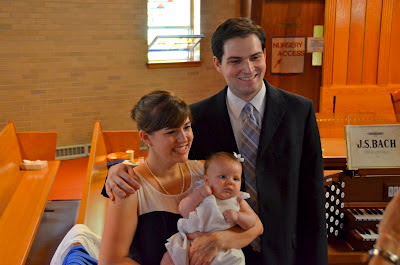 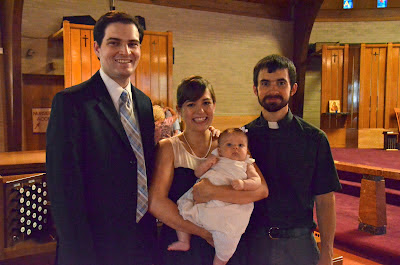 Obviously, she didn't hold the aquatic submersion experience against him: 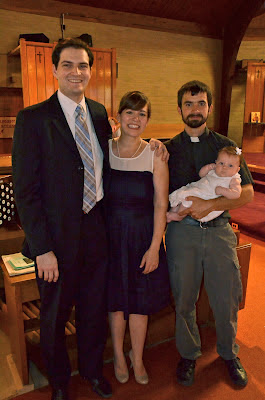 We were so pleased that our friends Cara and Gregg agreed to be Nell's godparents and were there to celebrate the occasion with us: 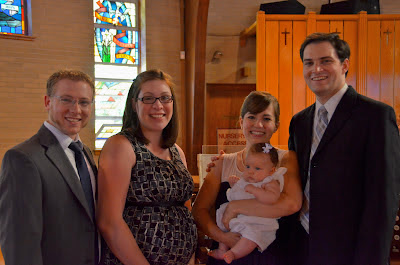 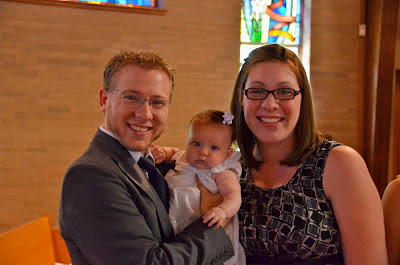 They were glad to get a 'front row seat' for all the baptism proceedings, since they are expecting their own first baby in October!
Nell's grandma and grandpa S. (Nathan's parents) were able to drive out from Pennsylvania for the occasion.  We got a family picture (Andrew and his girlfriend Hannah on the right): 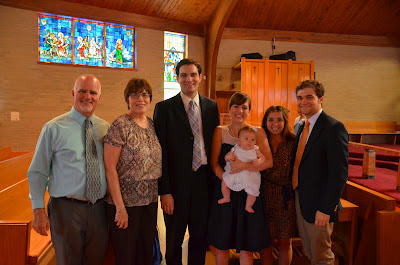 ~ ~ ~
Back at our house, we had invited friends and family over for a post-baptism brunch reception.
I had forgotten to ask people to RSVP, so I just made lots of food and hoped there would be enough to go around.  I stayed up late the night before getting things ready and making as much ahead of time as I could.
The menu:
{I had a few people ask me about my recipes, so I'm including links below for anyone interested in some nice, healthy brunch fare.}
2 Quiche Lorraine (Julia Child's recipe, naturally)
1 Spinach Quiche (modified slightly from Smitten Kitchen)
(I used Martha Stewart's pate brisee, minus the sugar, for both crusts)
Pecan Sticky Buns 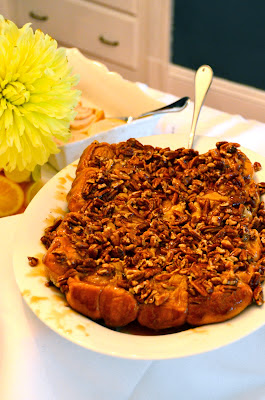 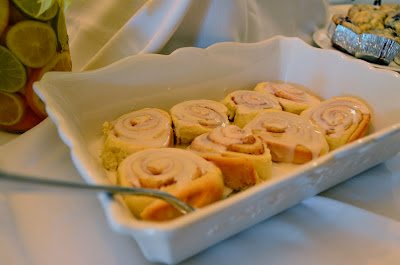 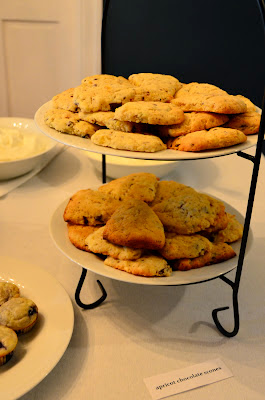 Blueberry Muffins (from Deb at Smitten Kitchen again)
And a 'serve your own yogurt parfait bar' consisting of regular organic yogurt, Greek yogurt, honey, peaches, strawberries, and Maple Cinnamon Quinoa Granola (modified from Elise's Quinoa Granola; this is truly the best granola in the world). 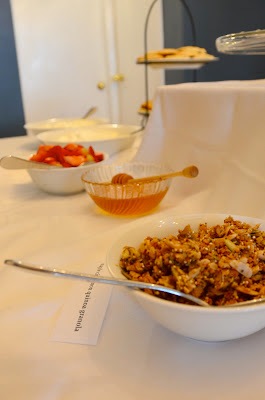 Many thanks to Cara for taking these photos for me!  I was a bit busy setting things out on the table and doing last-minute food preparations.
Oh, and speaking of Cara, did I mention that this was the day after her baby shower?  You may have noticed I re-used those citrus-lined vases as table decor for the brunch.  Although, it might be more accurate to say that I just didn't have time to take all the decorations down!
We ended up with about 30 people coming over, so I was glad I had made lots of food.  All three quiches were demolished, and only a cinnamon bun or two and a half dozen muffins and scones were left over.  Hopefully a good time was had by all.  I just wanted it to be something special to welcome my daughter into the family of God.
Between the baby shower, the baptism, and the brunch, it was definitely a busy weekend for us.
But such a celebratory and wonderful one.
Just this past Sunday, a woman from church came up to me and said, "You were just glowing for the baptism, it was so neat to see."
Yes... it was a really special and meaningful day for us, glorious and yet weighty at the same time.
~ ~ ~
Not enough pictures in this post for ya? (haha.)
How about some 'outtakes'?
The mother with the flaming eye: 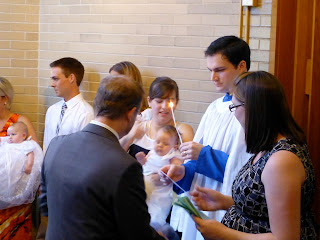 The lighting on this one turned out badly, but I love the big, toothless grin on Nell's face: 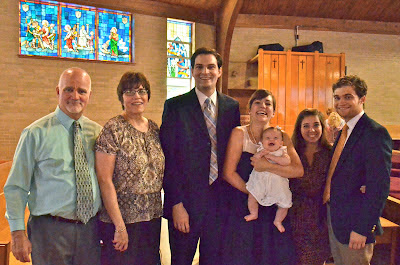 Look, all three of us can manage to be un-photo-genic at the same time: 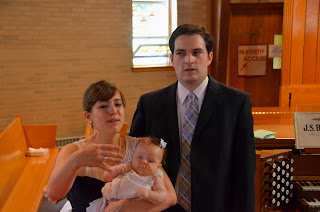