Travels, a Wedding, and Murphy's Law

FavoriteBoy and I have been having grand adventures from Beverly to Erie to Cleveland to Reno to Nevada City to Carson City to Reno to Las Vegas to Houston to Pittsburgh to Erie to Beverly...

Of course, it was never supposed to be that complicated.

Our travels started out quite well. After driving 9 hours to Erie (Dear iPod, I love you), we flew from Cleveland to Reno, rented a car, and drove to Nevada City to spend time with my family. Monday (the 9th) was my Mom's 50th birthday! I made her an apple pie (with no sugar at all - only a bit of honey) and my brother grilled Italian sausages on the back patio and we all had a wonderful evening. Tuesday and Wednesday we spent time with my grandparents, and we also spent hours and hours sorting through everything I ever owned. We packed 6 boxes of books, sheet music, records, and CD's! Plus a few dolls, a teddy bear I sewed myself in Jr. High, and some special things my grandparents have given me.

The boxes of music are all due to an extraordinary stroke of good fortune which I guess you could say came about as a result of my selflessness and generosity several years ago (ha-ha). My family helped some friends clean out their elderly parents' house in preparation for a move. We quickly discovered that these people had kept everything. they. ever. owned. Which worked out definitely to my advantage, as I walked away with piles of sheet music for four hands, two pianos, organ, violin, and piano. I also got dozens of wonderful records, a correspondence course from the 50's on tuning pianos, several Clavier magazines from the 60's, a stack of The Etude magazines from 1901-1908, and quite a few old fashion magazines as well.

Thursday I went to Jenn's bridal shower, which was one of the most enjoyable showers I've ever attended. It was held at a pottery-painting place, and we all chose pieces of white pottery to paint for Jenn. What a fun idea! I had a great time. That evening was the rehearsal and rehearsal dinner. Here's a photo from the rehearsal. What a background for a wedding! 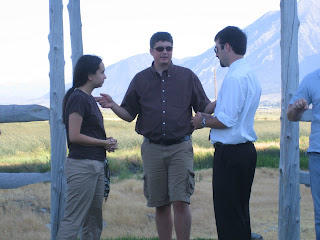 The rehearsal dinner was at a restaurant called B'sghetti's - which I think is a fabulous name for an Italian restaurant. I got to see my two nephews, and it was so nice to finally meet Thomas. Here's Jonathan stuffing his face with spaghetti: Mom and Dad enjoyed spending some time with Thomas: 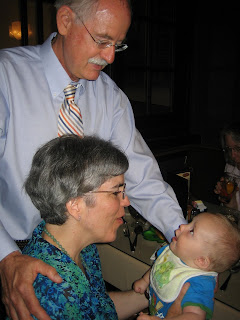 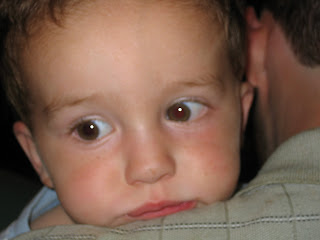 And my husband and my Dad: 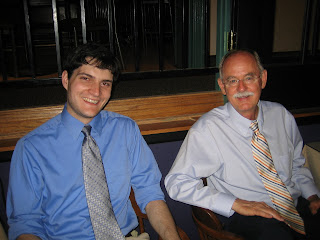 Friday was the wedding! Jonathan and Jenn had pictures taken prior to the wedding. I like this snapshot I got of them, because Jenn looks really wary of what she's about to get herself into. (Fortunately, she did go through with it.) 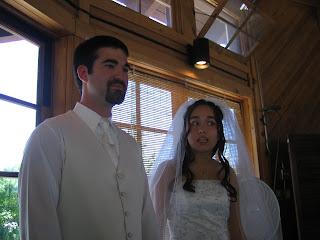 As a big answer to a very specific prayer request, Mom walked up the aisle for the ceremony. No wheelchair, no walker - just Dad on one arm and a cane in the other hand. Those of you who have been following my Mom's recovery probably know that doctors predicted she would never walk - in fact, that she would never do a lot of the things she's doing now. Isn't it unbelievable how great she looks? Thank you, God! 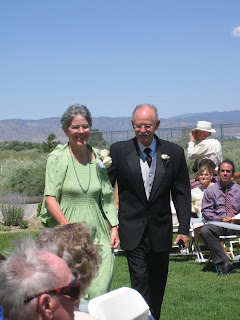 The wedding was so beautiful. The mountainous backdrop was stunning, and the wind must have made for incredible photos. The girls' dresses were blowing in the wind, and Jenn's veil floated all around her. (You probably can't tell from my feeble attempts at photography, but I'm confident that the professional photographer did much better at capturing the event.) 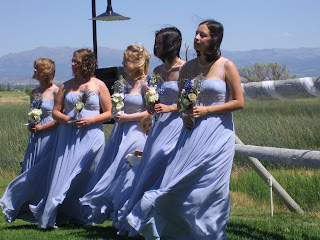 I was so happy to watch Jonathan and Jenn take their vows. Ever since I got married and realized how fun and wonderful it is to be married, I can't help wanting everyone else to get married, too! I wasn't the only happy one; not surprisingly, the bride and groom were all smiles: 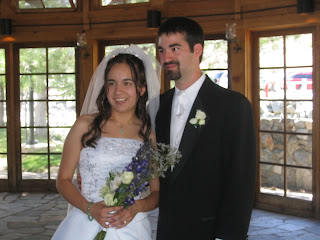 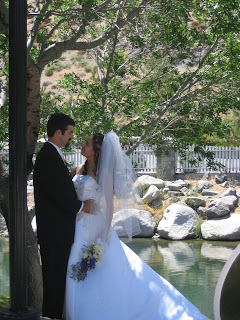 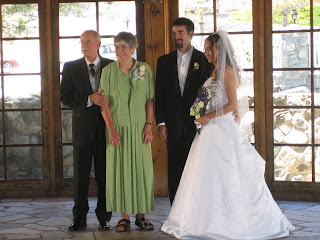 Thomas was pretty happy about the union as well! 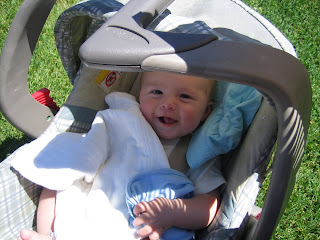 At the reception, Jonathan demonstrated his dilemma: "Should I be a photographer when I grow up... or a plumber?" 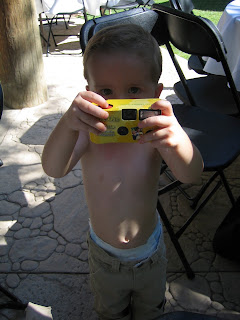 We ate yummy food while great country songs like "She's Everything" by Brad Paisley played in the background, and then Jonathan and Jenn cut their cake. 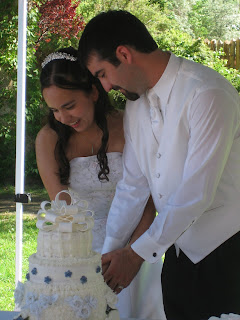 The left the reception in Jenn's car - thoroughly decked out by their crazy engineer friends!

Well, I hate to put a damper on the happy day, but it was at the reception that our travel troubles began.

When we parked our rental car, the front right tire ended up in a little ditch. With no hope of getting the car out on our own, we called AAA. They were quickly on site to save the day, but it was too late - our string of bad luck had begun.

You see, soon after the car incident, Thomas pooped on me. Actually, "pooped" isn't really an adequate word to describe the sudden explosion that defeated his feeble diaper and ended up all over my dress while I was holding him. So while relatives watched, laughed, and took pictures, FavoriteBoy attempted to wash the poop from my dress using only a baby wipe. All things considered, he did a really good job and I was able to enjoy the rest of the reception. But still, I tell you this tale of poop because it was second in our series of travel woes.

After the reception we took a red-eye flight from Reno to Las Vegas, where we were supposed to catch a connecting flight to Cleveland where we had left Nathan's car. Nathan was to be a groomsman in his friend Ben's wedding the next day, so we needed to get back to PA by morning. Unfortunately, our flight from Reno was delayed by over an hour. Airline officials kept assuring us that the flight would be delayed by only ten... fifteen... twenty... okay, thirty minutes. They promised we wouldn't miss our connecting flight. We arrived in Vegas ten minutes before our flight to Cleveland departed, only to discover that our flight was leaving from another terminal located in another building. We missed it, obviously.

We spent almost an hour talking to airline employees at the ticketing counter trying to arrange another flight. They dillied and dallied, and one by one each flight we wanted to take passed us by while these inept employees kept vanishing into back rooms for ten minutes at a time. It was so frustrating! We were finally down to one option: a flight to Houston leaving at 1 am. It was the last flight leaving Vegas for the night. The airline workers didn't want us to take the flight, but as they couldn't offer us any other options, Nathan insisted they put us on the flight. We arrived in Houston around 5 am and promptly began trying to get on a flight for anywhere near Erie, PA - Cleveland, Pittsburgh, Buffalo... please? Someone finally promised Nathan a ticket on a flight to Pittsburgh that left around 7:30. We were really relieved, because that meant he could get to Erie in time for the wedding! But I was not looking forward to sitting in the airport for five hours and then taking the flight to Cleveland they offered me all by myself. I followed FavoriteBoy to his gate and took a long shot. I asked the gate attendant if they had any room for passengers to fly standby. And then airline officials pointed out that the boarding pass Nathan had been issued wasn't valid, and everyone had been giving us incorrect information, but to make a long story short, they were able to put FavoriteBoy and me on the flight to Pittsburgh! We were so glad to finally be on a flight, but the whole thing had been so stressful... we were exhausted and extremely unhappy with USAirways.

So Stevedad had to come pick us up in Pittsburgh, but our luggage ended up taking a late afternoon flight from Houston to Cleveland. We arrived in PA with only the clothes we had in Nathan's garment bag - a few of his suits, and my dress Thomas had pooped on. Carolmom helped me wash the area by hand, and I put the dress on - still damp - to go to Ben's wedding.

That night, I tore a contact lens. Incidentally, I have carried spare contacts with me on every trip I have ever taken, and also, I have never torn a lens in my life, but this one time I forgot to bring extras contacts, naturally I would tear a lens.

Sunday morning I enjoyed a church service, sang hymns with a small group for some sick and elderly people, and then went to lunch with a group of FavoriteBoy's family friends - all half-blind. That afternoon it was WalMart to the rescue. They had a trial lens in my exact prescription!

And then we all had to go pick up our luggage and our car in Cleveland.

Back to Erie for a day, and then on Tuesday FavoriteBoy and I drove home. We needed to be back by Tuesday night since I had three lessons to teach scheduled for Wednesday morning. Three lessons that were all cancelled during the time that we were driving on Tuesday.

Okay, so this is a really long post. But it has to suffice for almost all of July! 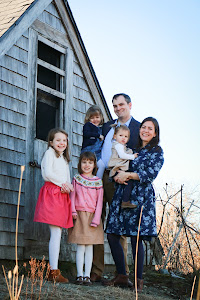