I think all the mamas out there know what I mean in my title, right?  It's not just us over here in our household, is it? 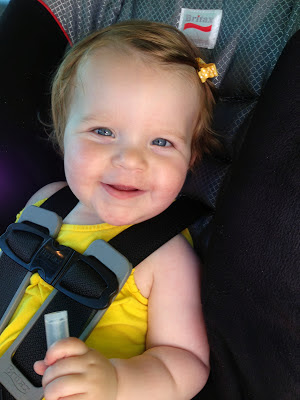 You wouldn't know it from this picture {too cute not to post, right?}, but the hours between the end of the afternoon nap and the beginning of the bedtime routine just seem really long, am I right?

These days, Nell usually wakes up between 6:00 and 7:00.  We hang out in bed for as long as she'll allow it {read: Mama stalls for more rest while nursing or plying Nell with toys with one eye open}, and then we get up and have breakfast.  Then Nell is usually happy to play for a little bit, and before you know it, nap time!

Just about two hours after waking, she's usually ready for her morning nap.  Lately she's been taking longer naps than her former 45 minute catnaps, so sometimes the morning nap can go until 11:00!  It's amazing!  Then we might go outside for a bit, or read some books, or fold some laundry, and boom, it's lunch time already.  Clean up from lunch, get some work done around the house, and around 2:30, she's usually ready for her afternoon nap.

Now, quite often, I'm teaching during her afternoon nap and the hours that follow.  But often I'm not - especially during the summer months, when I fit all my students into just three days a week.  Nell wakes around 3:15 or 4:00, and then begins the marathon of 3-5 hours until bedtime.  More often than not, everyone's unhappy during these hours.  Maybe her nap was too short, maybe she's teething, maybe the snacks offered are not sufficiently to her liking, maybe the weather is too warm, maybe she's grown bored of her toys... whatever the cause, my poor girl makes her displeasure known.  She can be happy, but usually only if she is in my arms.  And I am standing, walking, doing something.

You know what makes those oft-difficult hours of the day bearable?  Being in the process of making a home-cooked dinner.  Yes, really!  It probably sounds like it would make it worse, just adding one more responsibility with a fussy babe clinging to your feet and trying to clamber up your legs.  But sometimes you just need something to fill the hours, and making dinner is just the thing.  On evenings with simple dinners planned, or the occasional frozen pizza night, the hours... just... draaaaaaag.  But cooking a more involved meal passes the time so nicely.  And if you, like me, have a baby who likes - no, demands - to be held, put that baby on your back in a carrier or wrap, and watch her stop her cries and start watching what you're doing!

And if all else fails, it's such a nice excuse to call in the Backup Crew: Dad.  "Hey honey, I know you just got home from work, but I'm trying to make dinner and it would really help if you'd take this adorable baby off my hands..."

So that is my advice, friends, if you are also finding the late afternoon hours to be particularly long, especially on these long summer days.

There you have it: a boring post about Nell's nap schedule.  But a cute picture, yes?

Coming soon: meals I've been making with our summer CSA share!  A weekly summer series of vegetable adventures here on the blog!