It's technically already Sunday as I write this. Our final concert is over, and as NOI draws to a close, everyone has been standing outside the dorm hanging out for hours. Since I had a nice long nap this afternoon, I'm not really tired yet and enjoyed talking to some people before coming inside to finish my packing. I'll be able to sleep in tomorrow, since we don't have to check out until noon.

This morning we had the usual Saturday morning dress rehearsal. Our conductor was so pleased, and declared that we had improved exponentially since our first rehearsal on the Brahms and Stravinsky this past Monday. It's true; our first rehearsal was a bit disastrous. Up until today I was pretty worried about this program, but somehow we pulled things together.

Someone posted a picture of the orchestra rehearsing earlier this week to an NOI facebook group. You'll be pleased to know that you can see my back. Pretty exciting. {I'm sitting third chair in the first violins. The one in the yellow cardigan.} 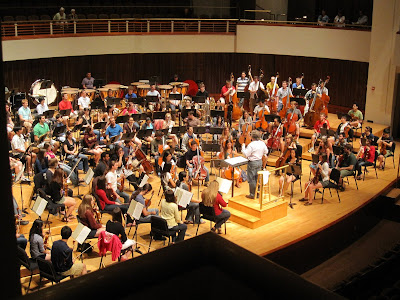 In rehearsal this morning, working on Stravinsky's Rite of Spring, our conductor declared, "Eez not aggressive enough! Eez too polite. Your parents would be very proud, certainly, but this is not good for Stravinsky!" Funny. The conductor definitely grew on me throughout the week. I think he loosened up as the week went on, and became more personal with all of us, even cracking some jokes.

The concert this evening ended up going pretty well. As we began the first movement of the Brahms, I was overcome by a sense of how lucky I am, that I get to play great music like this, that this is my life.

I think it's some of the most beautiful music ever written.

There was a reception following the concert, and everyone took lots of photos, despite the horrendous lighting in the reception hall. I'll post more later, but for now, here's one of me and Brooke. 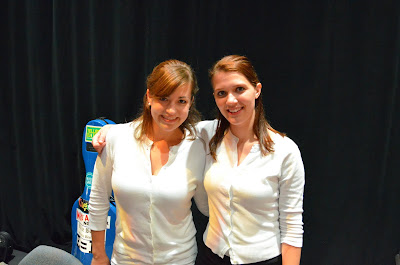 After the concert and reception came the first of the good-byes: Brooke and Ting-Ting both left! We were all sad to say goodbye, but it's good to live in an age of email, texting, and facebook. It makes staying in touch much easier.

Brooke and I have co-written a blog post. {The fact that it is awesome probably goes without saying.} I'll be publishing it soon after I get home.