I'm continuing to enjoy playing under Michael Stern. Incidentally, I can't get over the striking resemblance to his father, Isaac Stern. These pictures don't really do the similarity justice, but you get the idea: 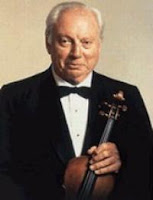 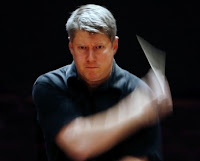 A few good quotes from today:

"Don't anticipate that sforzando [i.e. get loud too early], but when you get to it, flaunt it, baby, flaunt it."

"This needs to be disgusting, raunchy, dirty, offensive. So basically, play with your good viola sound."

He talked to us today about having the sense that we're all putting our sound into the center of the stage, actively contributing and creating the ongoing sense of pulse of the ensemble rather than simply following the conductor and the section leaders (although of course those things are important).

"This" - and here he beat time with his baton briefly - "is the enemy of true pulse. I would like to be able to just look at you and smile and have you play this melody beautifully."

We're playing Mozart's "Jupiter" Symphony, and Maestro Stern made the decision to reduce the orchestra in numbers today to make a more classical sound more attainable. The eight basses we needed for Mahler 1 last week are just a bit much for Mozart, not surprisingly! He was apparently under a bit of pressure not to reduce the strings at all simply so that everyone gets the opportunity to play, but today he finalized the decision to cut back on players. Not before looking at the full bass section threateningly yesterday, though, and saying, "Don't make me cut you!" Then, realizing it made him sound like a gang member, repeating it with a laugh and an ominous expression. Today when he dismissed half the basses and various other string players, he declared, "It's time to reduce. It's not that I don't like you all. We just need to do it." Then, pondering his first statement, he added: "And not just reduce, but we should also recycle and reuse." Then he told the now-unneeded string players, "Go enjoy a crunchy wholesome bagel, or perhaps a refreshing beverage." It must be that Harvard education; he never uses a small word where he could use a longer, better one, and he's always quite articulate.

Another piece on this week's program is Wagner's Overture to "Rienzi." In rehearsal today as he was working with the brass section, he said,

We're also playing Bartok's The Miraculous Mandarin this week, a [quite unusual] pantomime ballet now usually performed simply as a concert suite. Maestro Stern has from time to time offered insight into the plot and action and how it relates to the music. The nature of the ballet being rather scandalous, he always pauses and says, "How can I say this in as PC a way as possible..." and then comes up with something quite eloquent. He described the youth being lured upstairs by a prostitute something like this:

"There's this youth. And being young, he has a certain paucity of corporeal worldly experience. Which is not to say that he hasn't wanted certain things, but just that he hasn't yet achieved that particular life goal..."

He of course knows that we're all adults here at the festival, but seems to find a certain humor in treating us like impressionable young people nonetheless. Yesterday he made a comment about getting a beer, and then hastened to add, "I mean, no, drinking is bad for your health and none of you should ever do it!"

Time is flying by here, and so are all the notes on the hundreds of pages of music they keep throwing our way. Ligeti, Faure, Mahler, Pintscher, and Beethoven are behind me. Bartok, Strauss, Wagner, and Mozart taunt me with their tricky passages this week. And next week it's on to Brahms and Stravinsky!