This morning Brooke and I dragged ourselves (we were both really tired this morning!) across the campus to the music building to enjoy the free coffee and bagels provided to all the NOI students. These free meals aren't a daily occurrence, so we take advantage of them when we can. I was amused to see lots of students grabbing as many as five or six additional bagels and stuffing them into backpacks for later meals.

After breakfast was our dress rehearsal for tonight's concert, during which I ended up sitting at the front stand during the Beethoven symphony rather than my seat at the fourth stand -- our play-in faculty member this week has been mixing things around during rehearsals from time to time. It was fun to sit at the front stand; the girl who has been concertmaster for this week's program is really a fantastic violinist, and just sitting next to her made me want to play every note more beautifully.

After the dress rehearsal, Brooke and I took a long-awaited trip to a mall in Annapolis to make a very important purchase. I'm almost ashamed to say it, but we both had been coveting a certain kind of shoes that two girls here, Anna and Esther, both have. The shameful part isn't necessarily the coveting, it's that the shoes are Crocs. I've long been vehemently opposed to Crocs, but these Crocs changed my mind:

See? They're like cute, retro, jelly shoes! And the best part? We had it on good authority from both aforementioned owners that they are comfortable. Since we're walking a couple miles each day back and forth across campus here, our current flip-flops just weren't cutting it.

So Brooke and I are now the not-so-proud owners of Crocs. Really, I never thought I would ever own a pair of this brand of shoes, but I'm quite happy with these cute grapefruit-colored flats.

The Beethoven, while beautiful, was slightly terrifying to play because it's so open and exposed.

The Pintscher was, well, crazy. (I mentioned it once before.) Let's just say that when Nathan was visiting and sat in on a rehearsal, he sent me a text message that read: "I'm sorry, baby. If I really loved you, I'd shoot you so you wouldn't have to play this piece." It was pretty difficult, both in terms of notes and rhythms.

Our conductor for this evening's program was the composer Matthias Pintscher himself, who I must say, is a very good conductor. 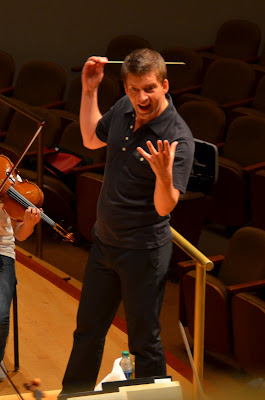 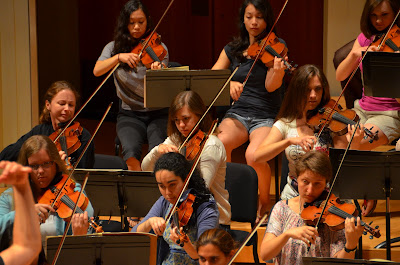 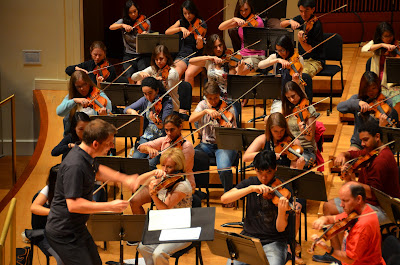 {Photo credit: Nathan took these pictures when he was sitting in on a rehearsal earlier this week. If the Maestro ever stumbles upon this humble blog and demands that his face be removed from this post, I will of course humbly oblige.}

After the concert we mingled around at a reception and took some pictures. Unfortunately, the lighting was not good, and an iPhone can only do so much. But here's a picture of me with another violinist here, Ting-Ting: 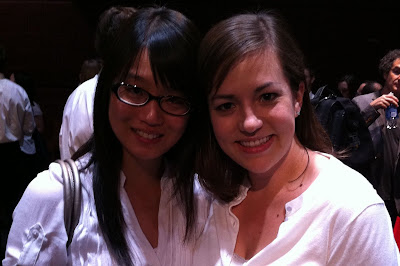 I'll leave you with an opportunity to listen to the last movement of Mahler's First Symphony, the final thing we played on tonight's program. As you can hear, it's pretty intense. I spent a lot of hours woodshedding that first violin part in a practice room this past week.

The day ended with a seemingly benign phone call to my parents that ended up being a family event, as my brother and sister-in-law were there for the evening, and my sister and brother-in-law were visiting from southern CA, and my Dad put me on speaker phone. Family phone time... very fun.