It's been a really good week so far. On Sunday the children's orchestra I conduct had their winter concert. The kids played so well, with a nice sound and mostly good intonation. Best of all, they demonstrated wonderful attention to the music and to their conductor! Before the concert I had spent some time preparing them for the stage and the distractions that would inevitably be awaiting them. I even told them, "Your parents might misbehave and try to wave and get your attention, but you have to ignore them and stay focused, and tell them later not to distract you when you're performing!" When they took their seats on the stage I was so proud to see those eyes right on me, following my cues for entrances, dynamics, ritardandos, and endings! We even had one major distraction - a disabled child in the audience began laughing uproariously just before we started the last piece, an arrangement of the 1812 Overture. The kids were obviously startled by the noise but did a great job staying composed. The concert went very well and I was so proud of those little kids.

Yesterday morning I ran my fastest mile time yet - probably because the 17-degree weather was a real incentive to get back home as quickly as possible.

Later that morning I went to Shaw's to take advantage of some coupons and deals and prepare for some holiday entertaining. I bought some things I wouldn't normally buy because I'm getting ready to host some of Nathan's music students for a Christmas party. It wasn't the cheapest coupon shopping I've ever managed, but I was still pretty pleased: 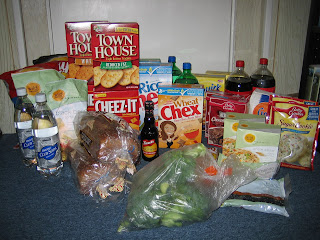 That's $90.74 worth of groceries, but I paid $35.58. You can't really see everything in the picture, but in addition to party splurges like Coke and Sprite (which were free, actually) and cookie mix, brownie mix, potato chips, and crackers, I also got two loaves of whole wheat bread, five heads of broccoli, two bags of organic dried beans, two boxes of organic whole wheat pasta, flour, brown sugar, two boxes of Bisquick, two bags of organic corn chips, and more! (I didn't get much produce in that particular shopping trip because I already have lettuce, carrots, apples, grapefruits, and a box of yummy clementines in the house.)

After my grocery shopping was completed I had a short rehearsal with my children's orchestra, followed by an end-of-semester pizza party. The kids were so excited about the party, and I enjoyed seeing how they've become friends over the past three months, even though rehearsal time is always disciplined and focused. To my surprise, the orchestra parents presented me with a $125 gift card to P.F. Chang! I'm so excited, because I love Chinese and have always wanted to try this restaurant. Then some of the kids gave me Christmas presents individually, too. Abby and her mom gave me a jar of homemade hot fudge, Nathanael and his mom brought me a plate of homemade Christmas cookies, and Roan and his mom gave me a beautiful handmade bag, specially "commissioned" to be just the right size for carrying music!

From that party I went to a gig, where I smiled to myself - as I often do - at the wonderful fortune that is mine: the beauty of music is woven into every day of my life, and I get paid for this stuff! I hope I never stop being amazed and happy about that.