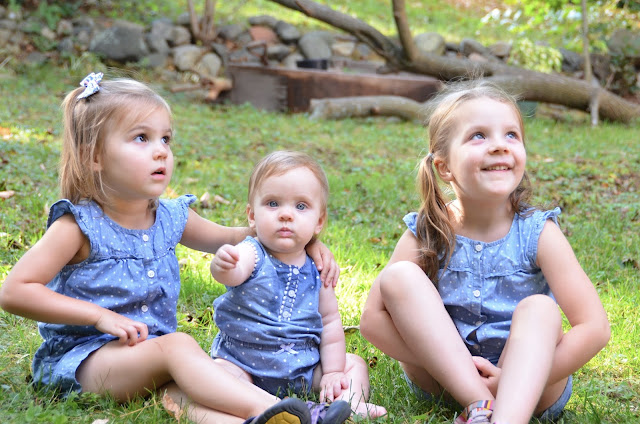 Oh, Ree.  Equal parts sugar and spice, some days I can't get enough of her and other days I wonder if I'll survive her.

A few months ago during the Gospel reading in church, I suddenly dissolved into silent laughter, shaking quietly in my pew.  It was a reading from the book of Matthew, where a Canaanite woman comes to Jesus and says, "Have mercy on me, O Lord, Son of David; my daughter is severely oppressed by a demon."  And all I could think was, wow, this scripture is really resonating with me this morning.  I know how that woman felt, because I have a three-year-old.

And another time, reflecting on the temptation of Jesus in the desert, I found myself thinking that Satan should have just sent a three-year-old to torment him, because it seems like that could make almost anyone snap.

And let's just say I may have once started to Google "Is my three year old a s..." and felt a sense of relief when it autocompleted "sociopath" for me.  I guess I'm not the first parent to wonder.

She loves music, dancing, snuggling, and nursery rhymes.  She plays imaginatively with Nell for hours at a time.  When neighbors drive by and she's playing in the yard, Ree waves and hollers a friendly but unexplainable, "OH HI MISTER POTATO!" And then dissolves into giggles.  Every time.

She recently fell into our bathroom trash can in a jackknifed position after standing on the toilet seat to wash her hands, quite the sight to see - it was both humorous and pathetic at the same time.

Her speech is more and more grown-up, but she still has some pretty cute phrases that she pronounces incorrectly, and I'll continue to love it as long as it lasts, I think.  She doesn't say "opeeoh" for "oatmeal" anymore.  She recently stopped asking to sit in my "yap" or asking for a "yittle bite" of something - her L's are sounding clearly most of the time, and every time she asks to sit in my lap I respond, "...but don't you want to sit in my yap?"  And she laughs as though that's the silliest thing anyone could ever say.

One of my favorite words to hear Marie say  -- and she says it often -- is "beautiful."  There's something charming about how she says it: "It's beauuuutiful!"  She'll declare it confidently about her own artwork: "Wow! I did it! It's beautiful!" or about the work of others.  Driving down the road I'll hear her quietly murmur, "That's a beautiful house there."  Or more loudly sometimes, when she sees something she likes, "Yook Mommy!  It's beautiful!"  Several months ago we went to the Peabody Essex Museum and she ran around loudly exclaiming "It's BEAUTIFUL!" about everything she saw.  One dress in the wearable art exhibit caught her eye in particular, and she yelled, "It's BEAUTIFUL!" and then, upon looking more closely, continued, "NO, it's BAD! It's BAD!"  The other art museum patrons were thoroughly amused. 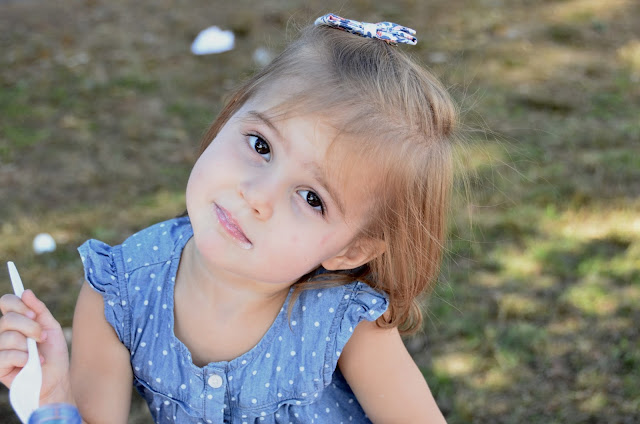 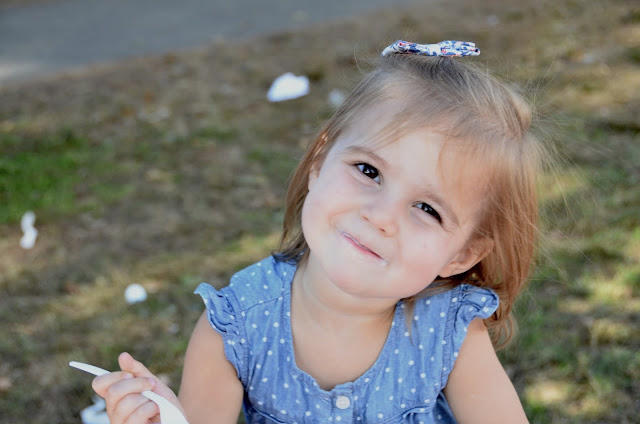 {Pictures from a recent day when we visited the Topsfield Fair.  And yes, I dressed all the girls alike so I could easily keep track of them!}

Coming into my bedroom early while I'm still in bed:
"Mommy hiiiiiii. Can I tay (stay) with you ever (forever)?"

Running upstairs on another early (think pre-6 am) morning: "Hiiii!  So how are you guys doin'??"

Sitting in the glider one evening, rocking together: "I want to stay here forever.  I love being with you."

Ree: "I don't love Daddy.  Daddy is bad."
Me: "Daddy is the one who comes to you in the night and snuggles you when you are scared."
Ree: "Well, I do love him in the night but not in the day." 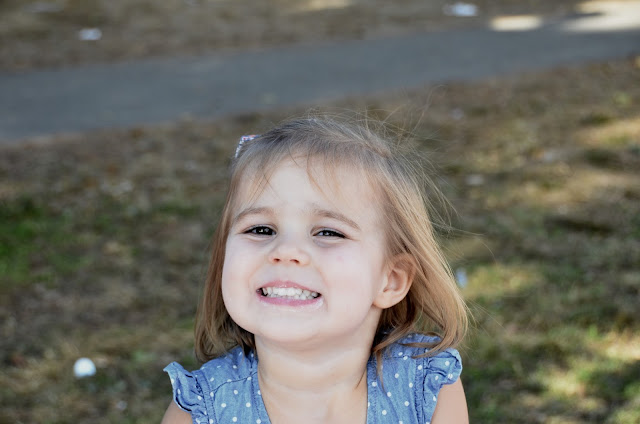 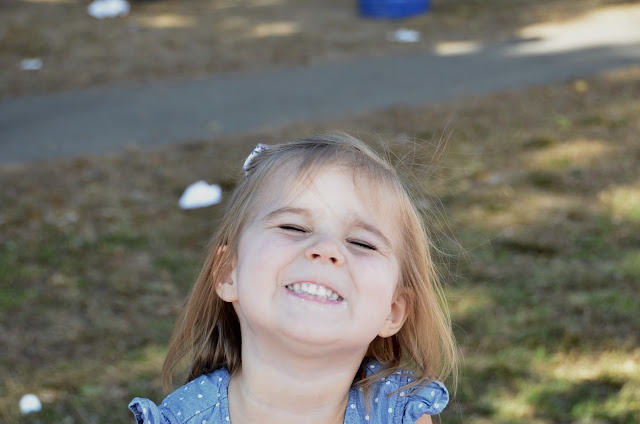 Looking at someone's birthday balloon: "I want a cupcake with finkles and iyfeam (ice cream) yike in the picture on that balloon!!!" (said very grumpily and demandingly)

Out of the blue: "I don't like to eat yucky spiders."

At breakfast:
Ree: "I want two grapefruits!"
Nell: "Mawie, it seems like two grapefruits but it's only one cut in half."
Ree: "No don't say that to me!  That is a bad word!"

"I want a chocolate chip!  With a tuft on its head!"

Suddenly holding a Hershey's kiss suspiciously one afternoon: "It just... wiggled out of the wrapper all by itself." 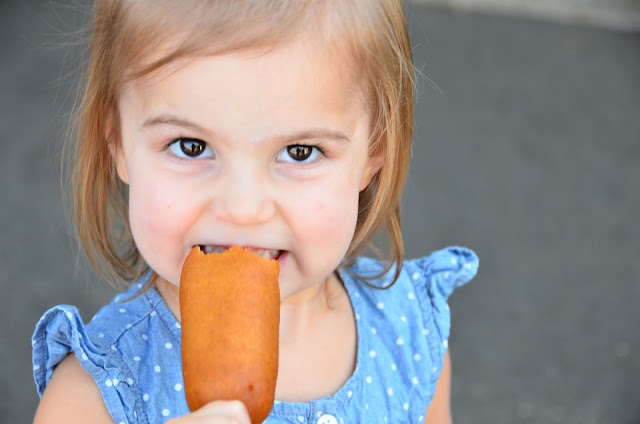 Me: "How do you take care of your babies, Ree?"
Ree: "I just hold them in my arms until they go right to sleep and then I put them down and they stay asleep."
Nell: "Wow, my babies don't do that.  You must be the best mama.  High five."
And they high-fived. 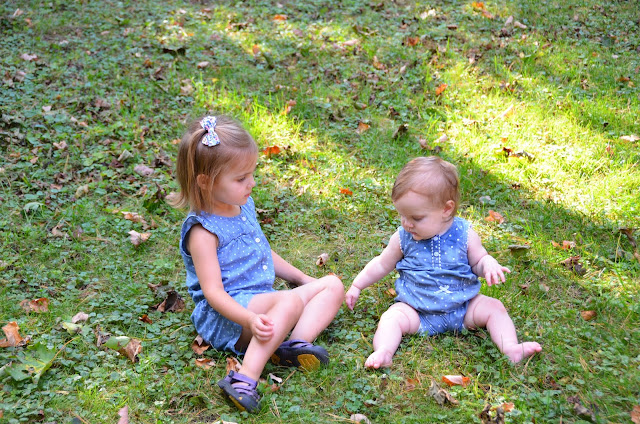 Upon finding a piece of clothing she sought: "I had-ed it in my vawer!" (drawer)

"I just have some hiccups in my mouth and they are hurtin' me."

"When I grow up to be a grown up I want to be a bunny hopping along the path."

Sick one day, and so sad:
"Mama can you please help me bubble over (our family term for throw up) because I don't want to do it all by myself because I'm little and sick."

Inexplicably, on another day when she wasn't feeling too well: "Actually my tummy is not hurting.  My nose was just having a conversation."

With a fever: "My whole body hurts a YOT!"

Because the English language is confusing: "I looked at it, and I seed it, and I taked it out, and I goed up to my room with it!" 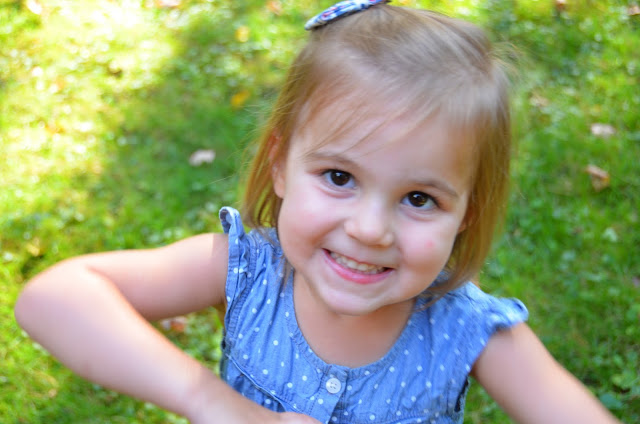 After I told her the main singer in the Sound of Music (who Nell immediately identified as having the same voice as Mary Poppins, by the way) was a character named Maria, Ree declared matter-of-factly and inexplicably, "Oh yeah.  One of my moms is named Maria."
{ nope } 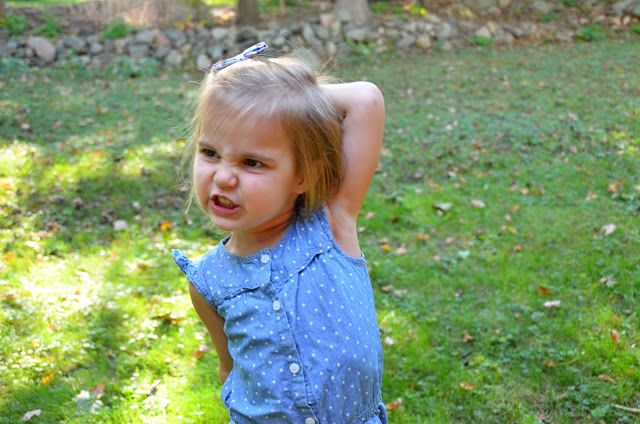 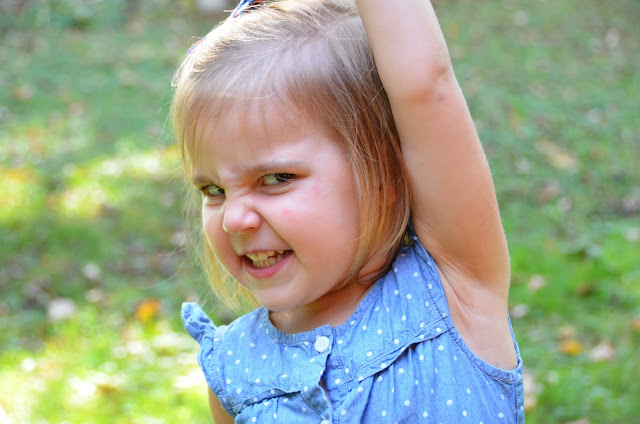 Ree: "Mama, can I use your colored pens?"
Me: "No..."
Ree, angrily, pretending to read on my package of pens and following along with her finger, "BUT IT SAYS 'YUP IT IS FOR KIDS'!!!"

Driving in the car one day, she became frustrated and started yelling from her car seat.
Me: "What's wrong?"
Ree (playing an imaginary violin in the air): "I want to do an up bow not a down bow!"

Nathan: "I'm going to be home tomorrow, so I can play with you."
Ree: "Daddies don't play.  They read on their phones."
(BURN) 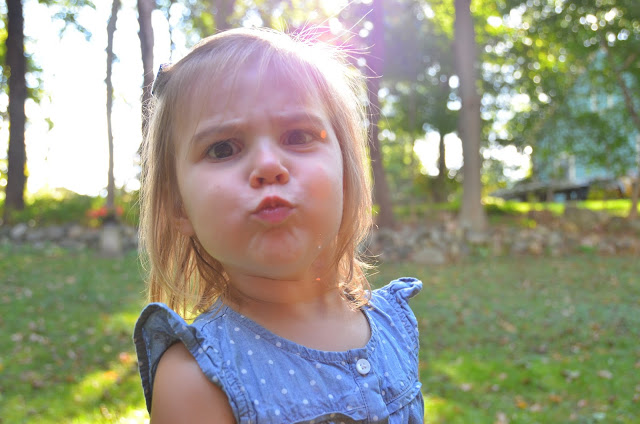 Meticulously folding a small piece of toilet paper:
"I fold it into a fare.  Not a wangtangle but a fare."

Talking about the small holes in our hallway wall that Nathan drilled a couple of years ago to do some electrical work reconnaissance:
Ree: "If I go down those yittle tiny holes I will be so so gone.  I will be yost."
Nell: "Yeah you won't be my sister then I would only have one!"
Ree: "Yeah I would be so so gone forever."

Weighing herself one morning:
Me: "You weigh 28 pounds!"
Ree: "Just like Daddy!" 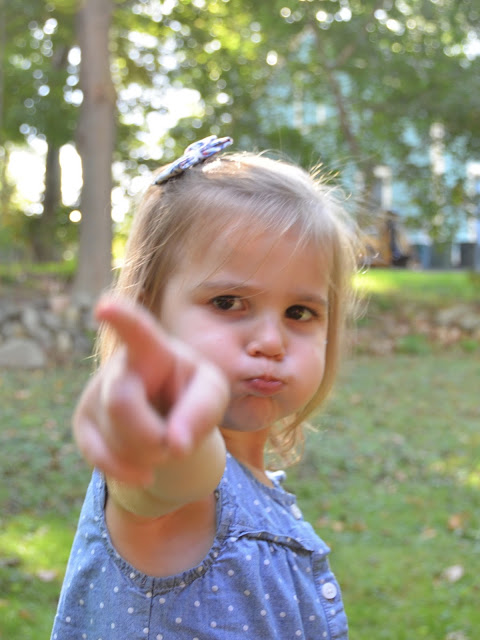 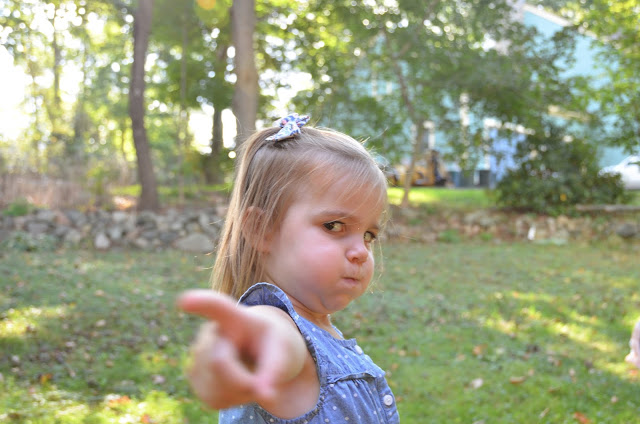 "I have jelly beans!  I'm going to save them all for myself and not give any to anyone but save them for an occasion."

"I found this weally special wock!  I'm going to keep it for an occasion."

"These are my special socks I keep in my drawer for occasions." 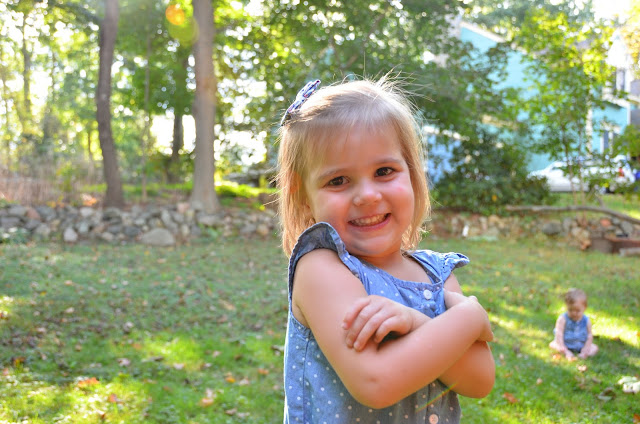 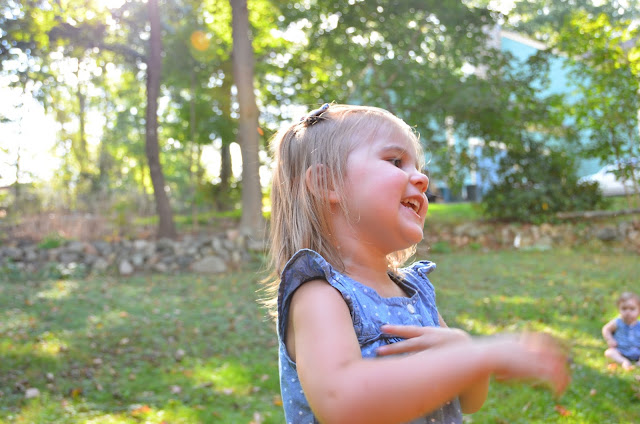 Frustrated and concerned after a brief conversation about death: "When I grow up I'm gonna 'top (stop) dying!  Actually when I grow up I am gonna die but with Mama and Daddy and Nell!"

During a thunder storm: "I scared!  I want to snuggle with somebody who is big like tall to the sky maybe like God."

After a required potty break at church one week:
Me: "Okay, before we go back into church, remember that we need to be very very quiet."
Ree: "Yeah!  Because everybody is sleeping!" 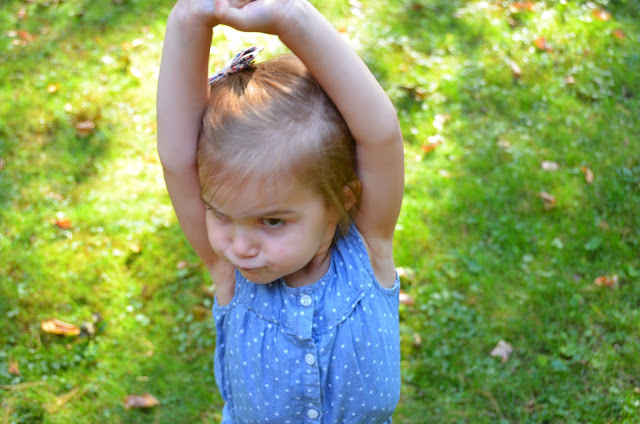 Some interactions with her big sister...

Playing together:
Ree: "I'm gonna be Peter Pan and you be a dead rat."
Nell (cheerfully): "Okay!"

Antagonizing her poor big sister:
Ree: "Mommy, we are the only nice ones, and Nell is bad."
Nell: "I'm not bad!"
Ree: "Yes you definitee bad!"

One morning when Ree was a little under the weather:
Nell: "I'm sorry you're sick, Mawie!"
Ree: "You're gonna be sick too soon, so you won't be smiling anymore!"
(...sociopath...?)

(that one really killed me for some reason.  I laughed until I had tears in my eyes!) 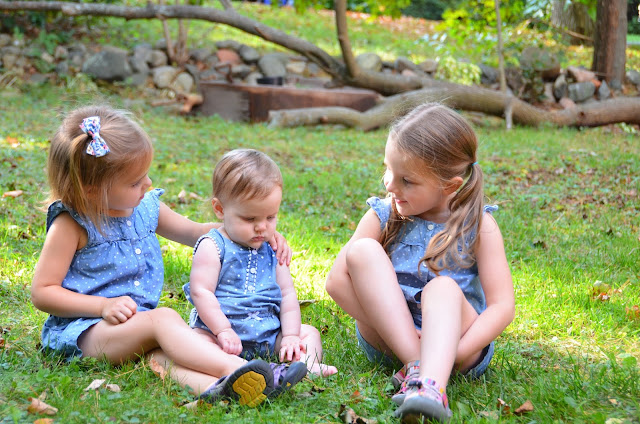 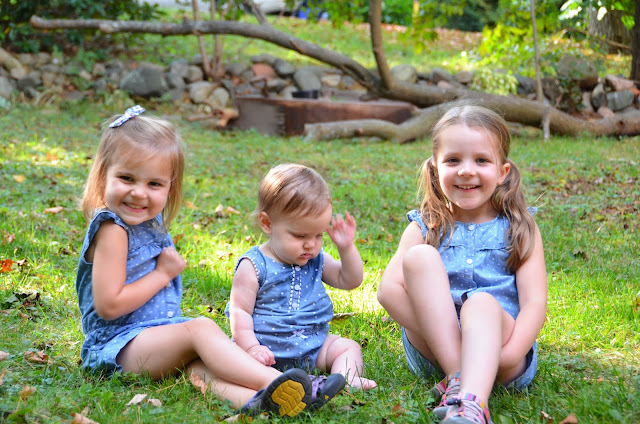 And there you have it: a few (okay, more than a few) of Ree's finest moments over the recent months.  We sure do love having this girl in our family.
Posted by sarah marie at 7:15 PM