the endless bubble-overs, a foot injury, and perspective

Perspective, I suppose, is a gift mainly granted us by the passing of time -- and with it, experience.

Today being March 16 marks one full month of near-constant illness in our household. 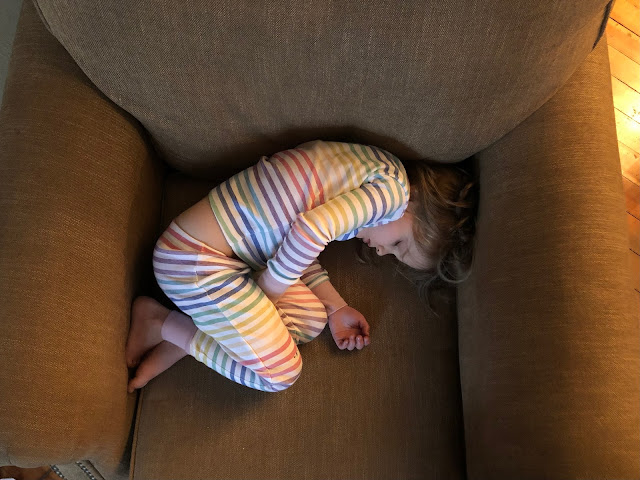 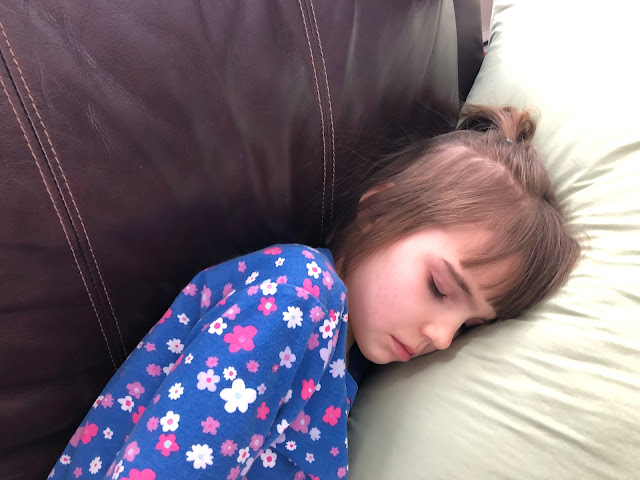 Oh, it hasn't been without its brief moments and days of respite and health, but really on the whole it's been a brutal month. Nell started us off with a stomach bug on February 16, and a full week later when I thought the rest were in the clear, Ree was "bubbling over," as we say, for a brutal 48 hour period that left her dehydrated, eyes sunken, even confused at times. She turned the corner and a week after that Nell was sick again. Wait, what? I thought we'd checked her off with this one, but apparently not. All were healthy for a few glorious days, but it was not to last!

On Ash Wednesday I turned my ankle, an incident that seemed quite nondescript at the time. The girls and I went ahead to church services for the afternoon and evening, but by the time we got home that night I was in so much pain that Nathan took me to the ER. (I have since informed him this is never to happen again!) Six hours later and one utterly sleepless and miserable night later I was discharged with a tylenol I'm sure I could have found myself much more quickly at home, a pair of crutches, and instructions to call an orthopedist in the morning. Nathan took the following day off work and took quite good care of me, but by Friday morning he was back to work -- not before, however, Sylvie had unexpectedly vomited all over me first thing that morning. Never a dull moment!

I hobbled around on crutches for several days, pondering that God must have really felt the need to remind me of my mortality for Lent. Nothing to make one feel one's age and a true sense of "dust to dust" like injuring a tendon just by, well, walking. A subsequent visit with an orthopedist confirmed the injury was a strained tendon, painful enough in its own right and doubtless made more so by the odd existence of a small extra bone in my foot which likely pinched things all the wrong ways when the injured tendon swelled. At least the "boot" they gave me was easier to hobble in than using crutches. Additionally, the crutches had already put a painful shoulder, recently adjusted and fixed by my chiropractor, right back in its previous painful spot, necessitating a few days of additional pain and another chiropractic visit!  A week and then some past the original injury, things were beginning to feel noticeably better and I was hopeful. Spring is around the corner, everyone seemed healthy at last, and hopefully I'd be walking without the boot in the near future.

But it wasn't to be! Next to fall victim to the stomach virus was Molly, the day after her birthday (March 10 -- she's five now!) and right after a dinner celebration complete with the "castle cake" she requested. Three days of true misery followed by another with the odd bubble over here or there. At least, at five, she can manage to get it into a receptacle nearly 100% of the time! And finally, Sylvie joined her this Monday, making it clear that her brief vomiting the previous week was not the full treatment this virus planned for her. She's still intermittently throwing up as of this morning, when she was lying so sweetly on her back beside me in bed, and a veritable fountain erupted all over the both of us with no advance warning whatsoever.

I can't help thinking that all of these things that past month have brought our way would have had me in a substantially worse frame of mine a mere five years ago. It's been hard, absolutely. But experience has taught me that we'll have our times to thrive and our times to just survive as a family. Right now we are pretty clearly in one of the latter. I can accept that a tidy house, being caught up on laundry, and having regular homeschool days are simply not in the cards for us. It's the "busy mundane," as I've always experienced times like these -- long days with nothing to show for them except parched lips that were dabbed with balm, thirst that was quenched with tiny sips of water at a time.

We've been through times of survival like these before: four hyperemesis gravidarum pregnancies, that time I broke my foot six years ago (also during Lent -- what is God trying to teach me?), plenty of other times when week seemed to follow weary week of sick kids, and so many other little trials that never seem small until they are quite a ways behind us.

With this bit of perspective, I find myself sitting here tonight, holding Sylvie through what I truly hope will be the last of the sickness this household sees for some time. The house is messy, and my arms are weary from holding a child so needy for so many days. Violin lessons I had to cancel will have to be made up sooner or later. Homeschool plans will be altered or made up over the summer. But I'm far less discouraged than I thought I might be.

We have been in a long month of survival mode, to be sure. But that means that it's at least possible that a time of thriving could be around the corner at any moment!

This evening I scrolled back through the past month of photos I've taken with my phone. I sort of expected to see only photos reflecting how I've experienced the long weeks, photos that look like this: 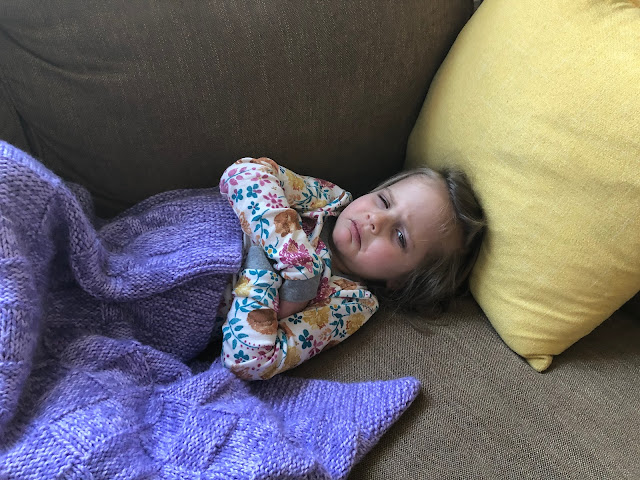 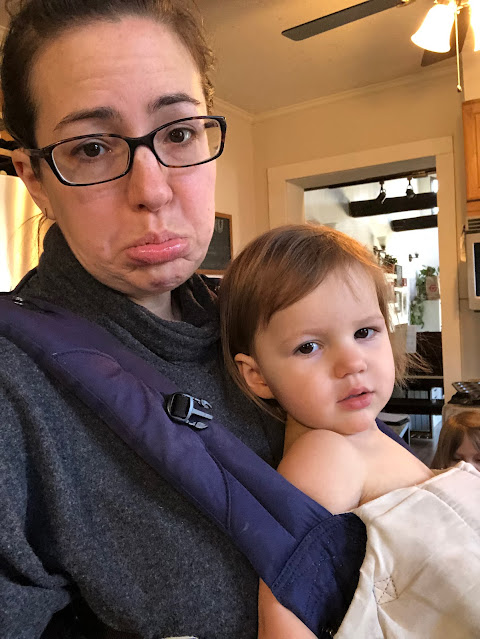 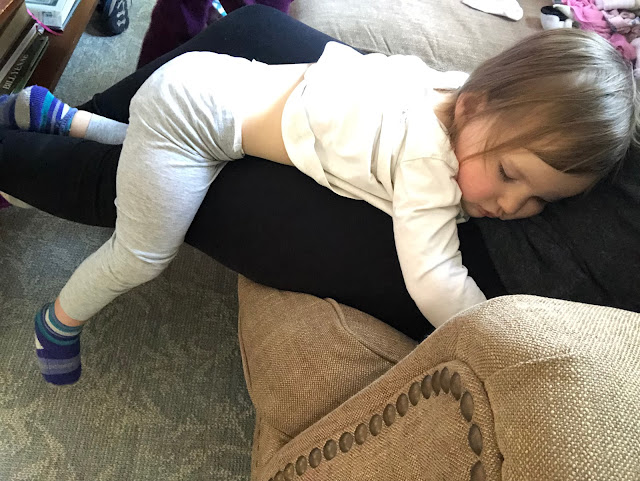 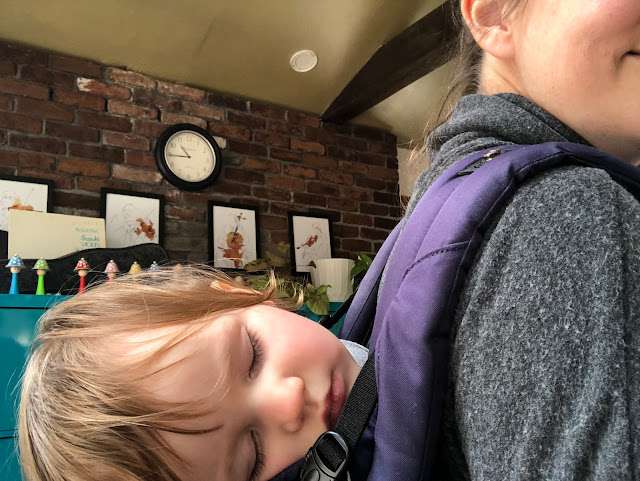 But what I also found were photos that showed a lot of pretty enjoyable life being lived in between cleaning up after sick kiddos. Pictures of healthy kids playing even as sick siblings slept in my arms.

Not pictured is the little song her two older sisters wrote her for her birthday, complete with ukulele chord chart added by Nell, who strummed along as they sang. And the pairs of cozy socks given to me to provide a little comfort when I injured my foot. And the friend who stayed up most of the night holding down the fort with our kids during my ER trip, and has brought us groceries so I didn't have to navigate the grocery store with four kids and crutches.
And really, if nibbling olives off chubby baby fingertips can bring Sylvie this much joy, then I too can find joyful, ordinary, holy moments in the past month. 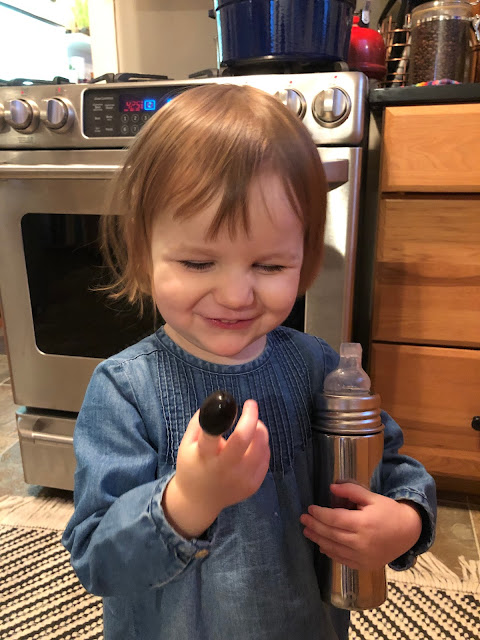 {But I really, really hope that cutie wakes up healthy at last tomorrow...!}
Posted by sarah marie at 7:07 PM