The master of making faces, the funniest kid around, and with a head full of truly terrible ideas, at age 3.5, Ree continues to keep us on our toes.

She is usually quite trustworthy out of my sight, but is never to be trusted in the bathroom alone.  Although I should know better (based on incidents including but not limited to toilet paper being stuffed in the sink and the sink being filled and flooded, for example), I recently sent her upstairs to use the bathroom and told her I'd be there in a minute.  I arrived to a guilty smile, and Ree said, "Mama I'm sorry but I washed the walls with toilet paper and water..."  Filled with dread, I asked her, "Where did you get the water you used?"  And of course, my worst suspicions were confirmed as she pointed down between her legs into the toilet bowl.  Oh my lawd but this child.  What am I going to do with this child?! 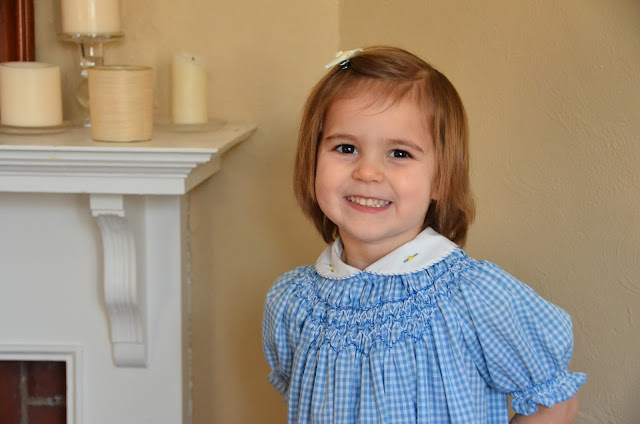 She calls flamingos falingos and a placemat a spacemat.  A telescope or a kaleidoscope are both called eyedoscopes, somewhat interchangeably.  She sings Joy to the World exuberantly although Advent and Christmas are past, blending her words together into "heavenature sing, heavenature sing! heaaaaaaavenature sing!"

She has been known to run around the house declaring "Pip, pip, pooray!"

And when her teeth chatter, she'll say, "My teeth are snapping from the wind!"

And one of my favorites: "See you later!  In a crocodile!" 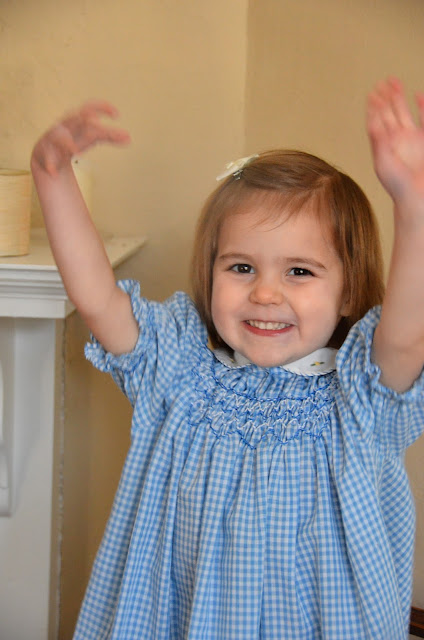 When a woman at the grocery store smiled at her, Ree declared loudly: "Well I don't like you!"
{And I died a little of embarrassment, of course.}

As we came to the end of a fun hike: "I know we really need to go but I really want to stay here forever."

A conversation with her little friend Lydia, demonstrating that Ree is a regular little Miss Congeniality:

Musing to herself: "My belly button is a little bit crooked and it needs something to go on top of it." 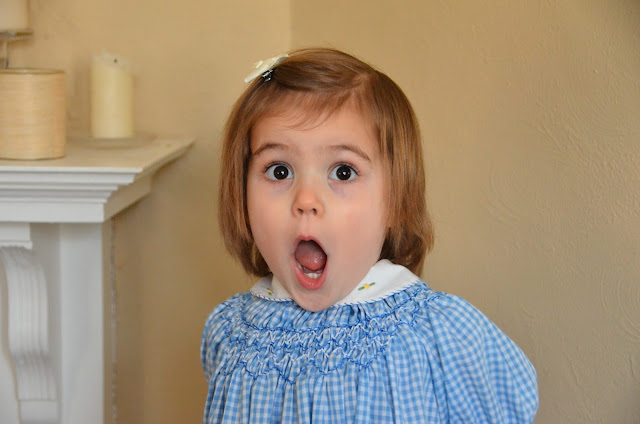 Me: {places order at Starbucks drive-thru}
Ree (yelling from the back of the van to try to be heard on the speaker by the barista): "CAN I PLEASE HAVE A DONUT?!?"

During Advent, when we were focusing on doing kind and sacrificial things for one another, Nell asked if something she had done was a sacrifice, and Ree retorted nonsensically, "No, that is not a sacrifice, that is a mad mean mookie!"

Her food choices are remarkable for a three-year-old:
"I don't want soup, I want broccoli. Or salad."

In fact, she loves salad so much that she named her baby doll Salad.  Salad as her first name and Saliva as her middle name.  Salad Saliva.  Yes, really.

Ree {taking after her father perhaps, who has a cheek-biting habit}: "I'm eating my cheek where I bited it."
Me: "Oh, don't do that."
Ree: "But I like it and it tastes good." 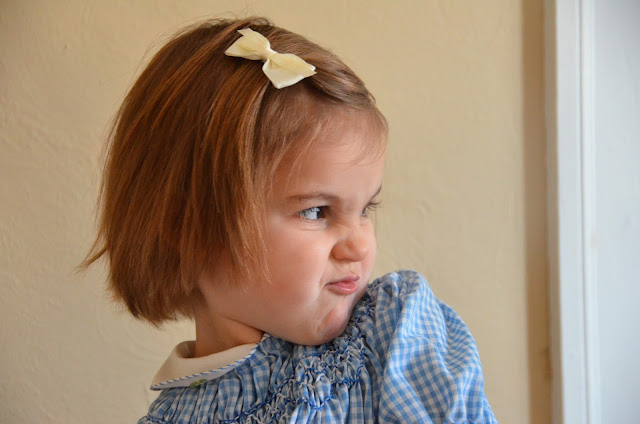 In church (angrily): "I can't hear my sentence because everyone is singing too loudly!"

Disapproving of one of Nathan's Christmas music selections he was listening to: "This music is not Christmassy it is just plain."

Listening to Roger Whittaker for a moment of a throwback to my childhood, Ree said disparagingly: "I don't like this movie music!"

As the organist began to play "Go, tell it on the mountain," in church one Sunday morning, Ree declared, "This is the wrong kind of music for church!"

Driving in the car one day:
Me: "What kind of music should we listen to?"
Ree: "I want church music."

She thinks all pop music is a commercial - like the moments of pop music she hears in between songs when we're listening to music on Spotify.  A few times when I've put on some pop music to listen to, Ree will come dashing into the room and yell, "THIS is just a COMMERCIAL!" 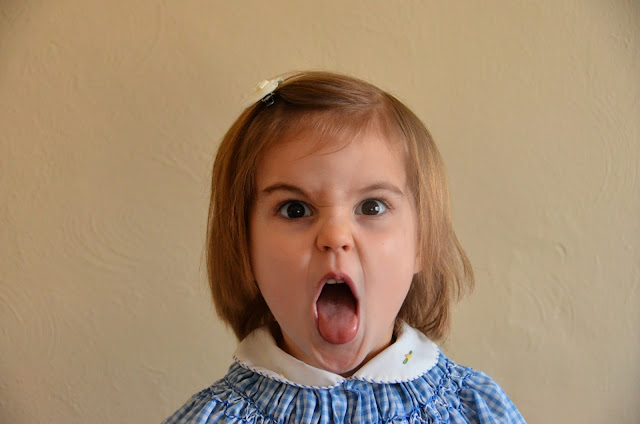 "I need to practice my violin now because in seventy-two weeks I'm playing a concert for my kids."

Walking in abruptly on me using the bathroom: "You look nice."   {Um, thanks?}

Putting me in my place, as she frequently does:

{In my defense the so-called "screaming" is usually a slightly raised voice urging the speed required to go upstairs and get on the potty before the slightly damp undies turn into a full-on accident.} 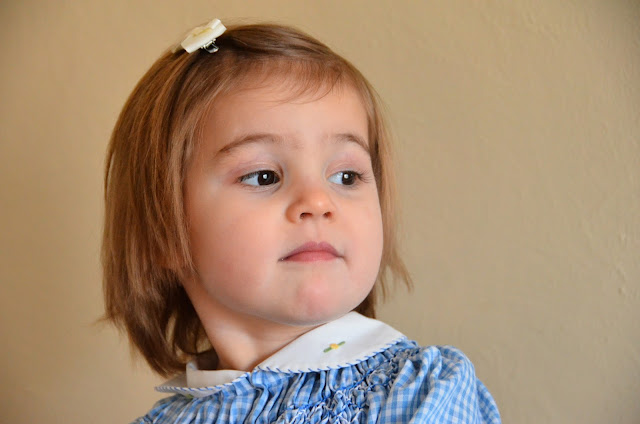 When I took the girls to see the Nutcracker at the Boston Ballet after Christmas, and the Arabian dance began {with the male dancer, as usual, without a shirt on}, Ree declared in a loud whisper, "That's not appropriate!  That's not acceptable!  That daddy is naked!"

And when we went to the beach one wintery day and there was snow all around and the girls were in their snow pants and boots, Ree said ecstatically, "Look at the ducks!  I'm going to go in and swim with those ducks now!"

When she had an earache one evening, Ree said pitifully: "I have an ear 'fection.  Something is in my ear is choking me.  And it's having a fight in there.  And it's hurting me." 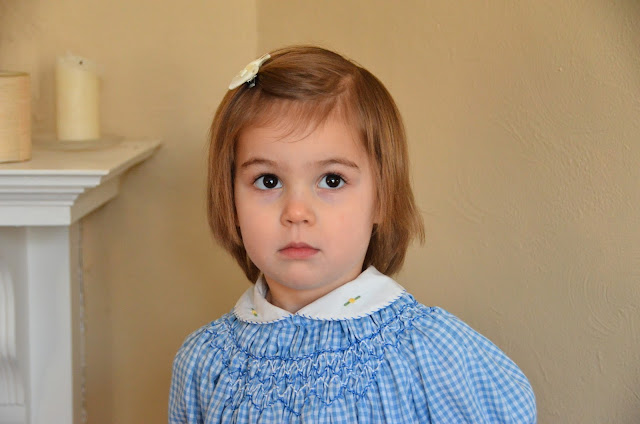 "God can make even Joseph and Mary cuz that's why God is flexible."

When I came downstairs wearing a dress one morning: "WOW I love you!  You are so beautiful!"

When I was reading The Lion, The Witch, and The Wardrobe aloud to them recently: "They shouldn't have gone to that dangerous place with a witch they should have stayed home with their mother!"

And further musings on Narnia: "I wouldn't go to those bad scary places.  I would just go to good churches." 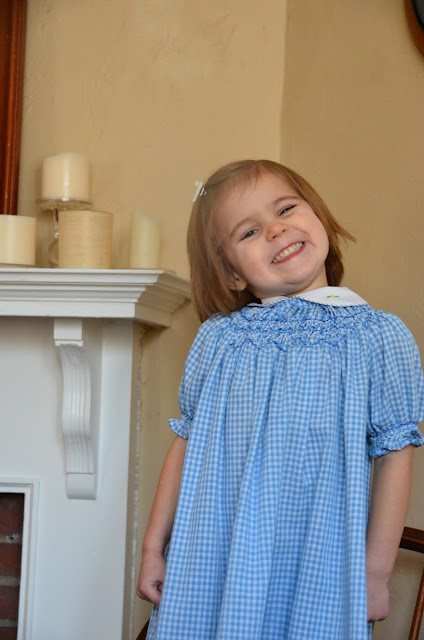 And there you have it, my friends. 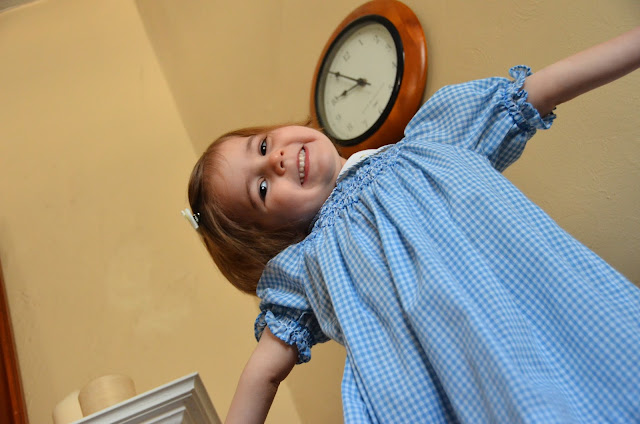