when your baby is a picky eater 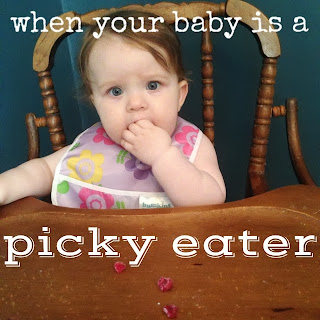 Nell had her first taste of solids just before she turned eight months old.  We introduced them on the "late" side of normal -- partly because I had heard and read that there can be a benefit to delayed introduction of solids if food sensitivities / allergies run in your family (they do in mine!) and partly because she just wasn't expressing any interest in foods.
Her very first food was mashed banana.  We got the camera ready.  I envisioned her taking some time to adapt to the new experience, but then gobbling up this delicious new treat.
Well, that wasn't quite how it worked out. 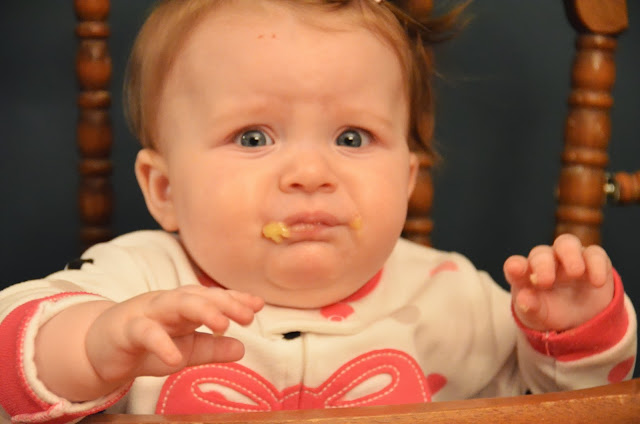 I'm not sure if it was the taste or the texture, but the banana caused Nell to gag and shudder from head to toe, spitting it out and pushing away any further offers.

Suffice it to say, she was not impressed.

I kept offering her foods over the coming months: avocado, sweet potato, applesauce, pears, yogurt, egg yolk, peas, carrots, oatmeal, and more.  My initial attempts were all homemade (pureed or mashed), but as Nell continued to reject them all, I eventually tried a few store bought baby food varieties to see if she liked those better.  {She didn't.} 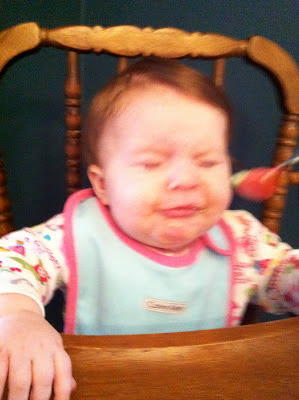 {action shot of the shuddering!}
I'd be lying if I said I didn't worry a little.  You see, my husband, Nell's Dad, is among the worst of picky eaters.  He doesn't eat fruits or vegetables, and I mean, he really doesn't.  Not even corn on the cob or apple pie or strawberry ice cream.  So I began to wonder if Nell was taking after Daddy Dearest.  her doctor said we'd give it some more time, and then consider a sort of sensory processing abnormality if it came to that.

More than a few people told me I ought to be giving her rice cereal or cheerios or baby puffs because she just had to eat solid foods, but I was resolved that she would eat veggies and fruits come hell or high water, and we'd just keep nursing day in and day out until she was ready.

I kept nursing her every three hours or so throughout the day and offering her tastes of healthy, wholesome foods a few times a day.  Sometimes something pureed, more often something mashed or a little bite of something I was eating, or something she could pick up and explore and try on her own terms.  Any bite of food she had, she'd gag, shudder violently, and push the food away.  I didn't cajole or force the issue.  I didn't try to trick her into opening her mouth or eating.  Some days I didn't even offer her solids, not wanting to be pushy and turn her off to the idea of them.  I waited.

I'm so, so glad I stuck with it and didn't offer less healthy alternatives.  Around the time she turned eleven months old, something clicked for this girl, and she was really, truly ready to be eating foods.  Some roughly mashed avocado, and bits of a whole grain ak-mak cracker enticed her one day.  And sweet potato the day after.  She ate some pears.  And then became a big fan of my plain, unsweetened homemade yogurt with little pieces of banana stirred in, and blueberries or raspberries, too.  And cheese!  She decided that she loved cheese.  And hummus.  And corn.  And tomatoes.  And black beans, kidney beans, and black eyed peas. 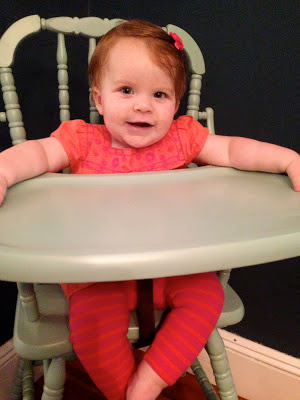 These days, at 13 months old, Nell eats virtually anything.  She's had mushrooms, farro, goat cheese, feta, chickpeas, asparagus, cilantro pesto, quinoa, and many other 'unusual' foods you might not think of a baby eating.

I guess you might say we ended up doing a sort of "baby-led weaning" type of thing.  Nell never wanted purees. But when she was ready, she wanted anything and almost everything her Mama was eating!  So she eats what I eat, and I help her if it requires a spoon, or she feeds herself if it can be picked up.  She loves mealtimes, and when I open the refrigerator she comes crawling into the kitchen saying, "Mmmm!  Mmm!  Mmmm!"  It's pretty cute.

Some days she doesn't want what I serve, and that's okay.  One day she'll gobble down fresh strawberries, and the next day, she'll taste each little piece I've cut for her and then spit them out and discard them one by one.  She can't get enough of whole wheat rotini, and a few days later, she rejects penne pasta.  But she's trying and tasting a wide variety of foods, and she's getting some pretty decent nutrition, I think.  {She still nurses, too.}

Now, obviously there are babies and children that are picky and maintain their pickiness into childhood and even adulthood.  And we'll never know if my methods specifically affected our outcome, or whether Nell would have outgrown her initial pickiness naturally either way.  So I can't say that I have solutions for all varieties of picky eaters, or even that I have much advice for parents.  If you are the parent of a baby who is very picky or even doesn't seem interested in eating any solids at all, I can only say this:

1. Be patient.  Keep offering healthy foods.  If you're doing that, then you're probably doing the right thing.

2. If your baby isn't eating what you're offering, don't feel like you have to try mac & cheese or cheerios or sugary baby yogurts instead.  In my opinion, even things like rice cereal are over-rated!  After all, who doesn't love their carbs?  I wasn't worried about whether or not Nell would learn to love bread and cereal; I wanted her to learn to like fruits and veggies first and foremost.

{Nell does eat Cheerios, by the way!  I just chose not to offer them instead of fruits and vegetables, and didn't introduce them until she was eating her fruits and veggies eagerly and reliably!}

3. Don't force it.  Don't resort to trickery or bribes or begging or pleading.  Just make the food available, and then wait and see what happens.  Don't make a big deal out of it.

If and when we have another baby, I'll know to worry less than I did with Nell.  In retrospect, my worry was a waste of time!  {Isn't that always the case with worrying?}  In fact, I might skip the purees altogether -- after all, food processors are a very recent invention, and the human species managed to survive without baby bullets and jarred baby food for centuries.

The six-month time frame for introducing solids is just too early for some babies.  Some little ones need a little more time.  At least, mine did!