overdue: the finding out and the telling

I've written Nell's birth story, but there are many things about the pregnancy, and the weeks following Nell's birth, that I never wrote about.  Finding out, telling Nathan, reactions of friends and acquaintances when we shared the good news, how the pregnancy itself went, and finally, processing my thoughts and feelings about the labor and delivery after Nell was born.
So here goes with the first in a series of overdue posts.

* * *
I was standing in the entryway of our first house, up on a stool, painting the walls a nice neutral cream color in preparation for tenants to move in soon.  We had moved into our second home, a bigger house on a quiet cul-de-sac, in July, and now it was September 2nd, 2011.  After a summer of working on the first house full-time to turn it into a suitable rental property, we were in the final preparations.  Several potential tenants were lined up to view the property in the next couple of days, and after taping and sanding the walls in the entryway, I was putting up the first coat of paint.
Standing there on the stool, I felt a little dizzy, and climbed down to sit for a minute.  A wild and crazy thought popped into my head: I think I might be pregnant.
I remembered lying down on the brown couch upstairs in the rental house the day before, to rest for 'just a minute,' and waking up two hours later, and the thought persisted: I think I might be pregnant.
So I closed up the paint can, wrapped the brushes, and drove to our new house to take a pregnancy test.
They say you have to wait a few minutes, and sometimes that second line can be faint, but here there was hardly any waiting, and the line was a dark, dark pink.
I went and sat on our bedroom floor, my back leaning against our bed, and stared at that little white and pink stick with butterflies of excitement.  It's a surreal feeling.  Physically, you don't feel any different than you felt moments ago, but you know that everything has changed, that life will never be the same, that the little pink line represents a person, a life, a soul.
So that was how I found out I was pregnant.  A sudden yet persistent feeling that I just might be, and a pink line less than a centimeter in width that represented our world changing.
I wanted to make telling Nathan kind of special, so I went to the grocery store and picked out two things: a card, and a little jar of poppy seeds -- the size of our baby that day, according to a website I had found.
Now, here's where I have to pat myself on the back.  I was initially looking for a 'Father's Day' type of card, but as it turns out, they don't sell those in September.  However, I ended up finding the perfect card for such an occasion - in the graduation section. 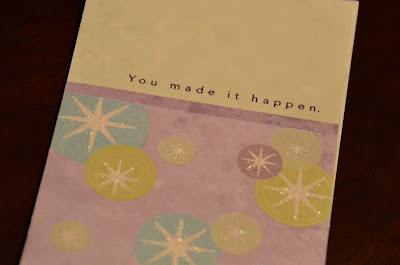 I didn't think much needed to be said, so I just wrote the exciting news in a simple sentence at the bottom of the card, in tiny letters. 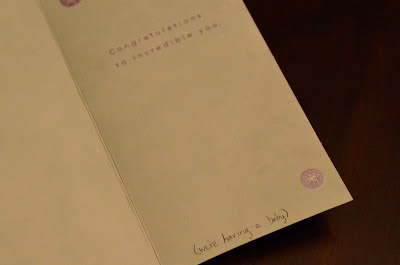 Then, card and poppy seeds in my purse, I took Nathan to dinner at Outback that night.
He later told me that he basically knew what was going on the minute that I, a vegetarian, asked if I could take him to Outback for dinner.
Oh well... the card was still brilliant, if I do say so myself.
I don't remember what either of us ate for dinner.  I just remember the excitement, the smiling, the nervous anticipation for all that the future might bring.  Sitting there in our booth together, sharing this secret between the two of us.
"We're having a baby."
There's nothing like the happiness, the thrill, the nervousness, the responsibility, the joy.  Two become three.  A family.
Seventeen months later, I look back on that day as one of my happiest.
{And not just because I had a pretty good excuse to not paint any more walls for the next nine months.}