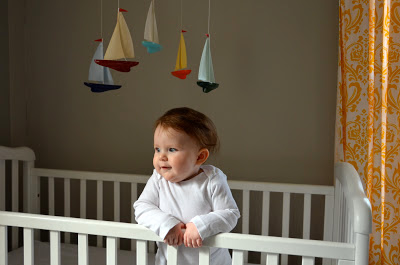 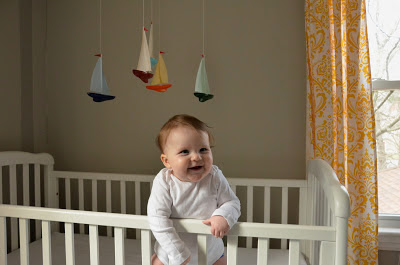 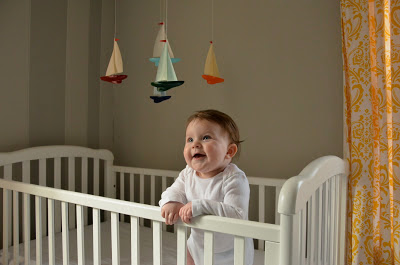 She weighs about 21 pounds, 8 ounces... give or take.
{She wriggles on the scale and makes the readings a bit difficult to discern.} 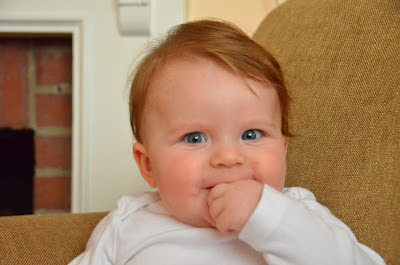 After a brief hiatus, she has rediscovered - albeit intermittently - her ability to blow raspberries.
And adding to her repertoire of baabaabaa and vaavaavaa and yaayaayaa, she has learned to blow a little pffff sound, which is pretty undeniably the cutest thing ever.  She's also mastered a nice little smacking sound, not quite a "kiss" sound but again, beginning with a "pfff," just implosively instead of explosively. 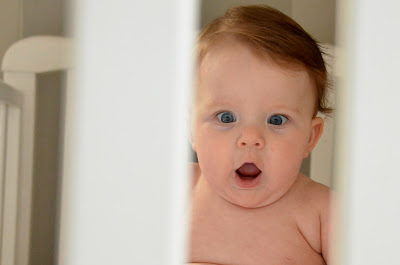 She is an expert shrieker, particularly when she is very excited about something.  Two notable such items include her red ball, and any glass of water she lays eyes on. 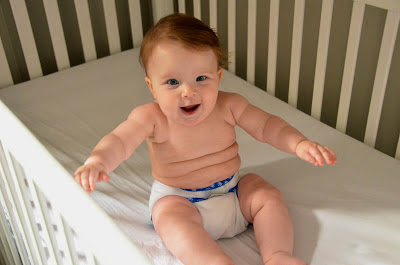 She loves water, and gets very excited whenever I get myself a glass, in the hopes that it will be for her.  Then, if she gets one sip, she gives a little yell if she isn't soon given another, and another.
She has a sippy cup, and she loves that thing.  Most of the time she seems to just squeak her gums against the rubber and forgets how to suck the water out.  But when she remembers, she is really quite enamored with the process.
She can drink through a straw.  Did I say her little blowing noises were the cutest thing ever?  Actually, the sight of Nell drinking through a straw is the cutest thing ever.  Okay, maybe it's a tie.

Nell really gets the whole idea of "peek-a-boo" now, and gets a kick out of it.  If I put my hands over my face and ask, "Where's Mama?" she will pant with excitement until I reveal myself.  And if I drape a blanket over my face -- or hers -- she can pull it off, and then laugh at the exclamation of "peek-a-boo!"
It isn't just peek-a-boo, though; she loves anything with a dramatic wind-up.  Crouching across the room and visibly creeping up on her will have her flailing with excitement.  Starting a gradual tickle at her feet and working up to her underarms makes her shriek with glee.  Pretending to sneeze with a drawn out, "aaahhh, aaahhh, aaahhh... choo!" elicits peals of baby laughter. 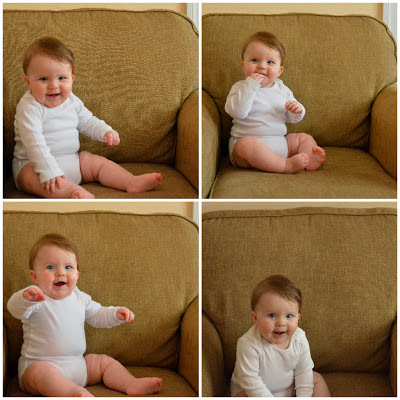 In the past month, I've introduced Nell to bananas, avocados, and pears.
None of these were received with much enthusiasm.
That's okay; we'll keep trying.
Lately sometimes when Nell is sitting on her blanket playing on the floor, she reaches for a toy... and reaches farther... and a little farther... and finds herself in a semi-split position, supported on her hands, and unable to either push herself back into a sitting position or to move into a crawling position.  She sits there for a moment, stuck, and then cries for help.  But I think soon, she'll decide to crawl!  We'll be in for it then, and have to do some serious baby-proofing. 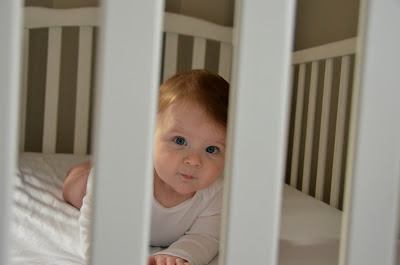 Dear Ellen,
In the past month you've had your first Christmas and your first tastes of solid food.  You seemed to enjoy the former quite a bit, but so far you are not impressed with the latter.
I find myself thinking a lot about how to help you learn to appreciate and enjoy healthful and nutritious foods.  I hope you grow up enjoying sweet potatoes, oatmeal, red lentils, guacamole, and a variety of fresh fruits and vegetables as much as I do.
I also hope we'll get to enjoy summer ice cream cones together from time to time, and bubbling fruit crisps, and many chocolate birthday cakes in the years to come.
I think we will have a lot of fun cooking and baking together as you grow up!  You already like holding wooden spoons and sitting in the kitchen with me while I cook or clean.
You still sleep beside me every night, and usually sleep from 7:30 or so until 7:30 or 8:00 am, with two snacks in the night - one when I come to bed and one in the wee hours of the morning.  Lately, though, you've been waking up at 4:30 and wanting to babble and play for a while.  Let's not keep that up, okay?
Lovelovelove,
Mom