It's over. Two weeks ago was my recital, and it is now quite over. It was a very weird feeling at first. I didn't want to blog about it right away, and I didn't listen to the recording for about a week. It was such a huge thing for me, this recital. I played Brahms d minor sonata and Bruch Scottish Fantasy; it was hard repertoire and my first solo recital ever, and for so long I just had this heavy weight on my shoulders, and it was weird when it was suddenly lifted away. All the stress and worry and pressure just dissolved, and in a way, life has been so much nicer ever since, even though new pressures have of course replaced the recital worries since then.

At first, in the first few days after my recital, I hardly knew what to do with myself. Dr. O. told me that evening that I could skip practicing for three days, and do nothing but watch movies if I wanted to. Well that didn't quite work out since I had to play in Jon C's recital and then Sarah H's, but it was still a nice break to not have to really practice. I did watch a couple of movies, too, for the first time in what felt like ages. Sometimes even now I'll just sit in my room and stare at the wall and think how nice it is to not be frantically thinking I should be practicing, or having nightmares about the Bruch being a disaster.

(I'm probably not cut out to be a musician at all. I get so worked up over things, and so worried and nervous.)

So... my recital. That morning I kept crying as I was trying to practice. I had also been sick, which didn't help things; I had a very sore throat and a bit of congestion and a cough and stuff. I was basically in a panic. I practiced for about four hours that morning and skipped my class. My family arrived and then went out and about to find food and stuff to put together a reception for me. Around five I went up to my apartment and put on my recital outfit. I was feeling frantic and I prayed a lot, which really helped. I just laid it all out before God - that I knew I hadn't worked as hard as I could have, but that I also knew I had worked harder than I had ever worked before, and I asked that He would bless my efforts and let me play to the best of my ability and let me communicate the beauty of music to my audience, because really I just wanted them to love such beautiful pieces. I asked also that He would calm my nerves. The amazing thing is, He did just that! I went down to Chase and had Katharine do my hair, and then I went over to Phillips and had about a half hour to warm up again before my recital started at 7:30. By the time I walked out on stage, I felt surprisingly calm. It's not that I wasn't nervous (I was!), but it was like all the panicking had already been done and there was nothing left to do but do my best. My hands didn't shake or sweat, which was a relief, because that often happens and it makes things very difficult.

The Brahms went okay. Not perfect and not perfectly in tune but okay. My teacher and his wife were both pleased with what a big sound I have developed this semester. Then the Bruch, which was also okay. Not great, but okay. I had some memory slips in the third and the fourth movements, and that was disappointing. All that work, and then I just forgot some of the parts I never had problems with before. It's one of the worst and most panicky feelings ever to have a memory slip; it's like time is going both excruciatingly slowly and freakishly fast at the same time. At the time it seemed like I had forgotten 90% of the piece, but of course in retrospect it was only a few measures, and my wonderful wonderful pianist covered for me so that most people didn't even know it had happened. (Dr. O. told me afterwards that I was lucky to have a pianist who could cover for me like that; not everyone can do that so well. I thought to myself, "well then I'd better keep the one I have!")

Now, the day before my recital I had accidentally ripped the callous on my first finger and it had bled. It had formed a little scab on the side of my finger, and it hurt but it wasn't generally a problem. Then, during the last movement, on one of the fast arpeggios I caught the scab and it ripped off and my finger started to hurt SO much and bleed quite a bit. I didn't know what to do with it - wipe it on my clothes, suck on my finger, or just let it get on my fingerboard. During the next rest I decided to just wipe it on my clothes. Anyway, that was an interesting little bit of excitement to add to the last movement.

And then it was finally over.

All of my friends are wonderful; so many people came and encouraged me, and I got flowers from my family and from Cara and from the girls in my apartment and from my two little students, and I got some wonderful cards that are now all sitting on my desk where I look at them fondly from time to time, and I got one super cool sign from Sarah K. that said "Go Sarah!" which she cleverly affixed to the inside of the green room door to give me a boost of confidence each time I entered the recital hall. Also, Julia, a student of Mr. B's at NEC, sent me a mix CD of the Scottish tunes the Scottish Fantasy is based upon, and also a bar of chocolate and a good luck note. How nice is that? It was a nice feeling to have so many friends caring about me and supporting me by coming to my recital. Everyone said such nice things as they greeted me afterwards, and several people said I made them cry (!!!). My teacher and his wife seemed pleased and proud, I think. My parents and grandparents were very happy and proud I think, and my little brother keeps telling me again and again "you are so awesome at the violin!" Dr. B. and Mrs. D. adjudicated the recital, and they both told me I passed "with flying colors."

Also noteworthy is the cool fact that I had to go back out on stage for two more extra bows, and I got a standing ovation. *sheepish grin* And that like never happens at student recitals, at least not much. So I felt really amazingly flattered and honored and blessed by the people who came.

Also, my cute little students came with their father, and he told me "Laura tells me that your pinky did not stay on your bow all the time!" I laughed. Whoops, caught in the act.

Dustin took some pictures with his awesome camera during the recital (no flash, of course). I love them, and here are a few of them for your viewing enjoyment. I hope you like them. 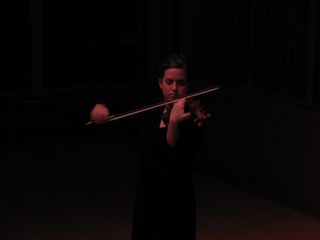 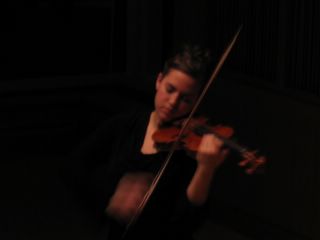 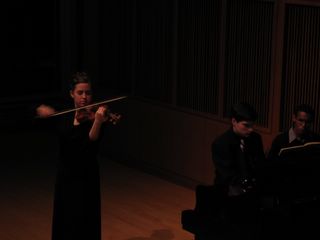 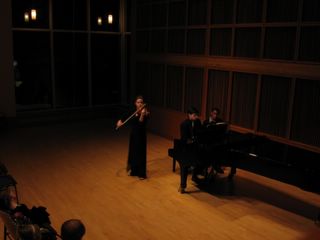 And here is me afterward with my poor finger: 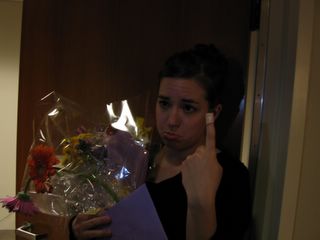 After it was all over I just crashed. I had been fighting off being sick, and as soon as all the stress was gone, I fell apart. I completely lost my voice that same night and started hacking up a lung. By the next morning I could barely squeak out words; it was completely pathetic and hilarious at the same time. I didn't even mind being sick because I was so relieved to not have to worry about playing that crazy Scottish Fantasy anymore. The only thing that was sad was that I couldn't go out and about with my family much that weekend because I was feeling so under the weather.

In summary, I am so glad it is over, and I really should change my major to something that doesn't require me to perform because I'm obviously not the sort of person who ought to perform because I get so stressed out about it. Also in summary, I am lucky, and oh-so-blessed. Also, I have a great best friend who is my wonderful accompanist as well as my FavoriteBoy, and he makes me happy.

Now this Sunday I will be playing the Bach double concerto with Melissa with our orchestra here. Come if you want to!
Posted by sarah marie at 8:41 PM